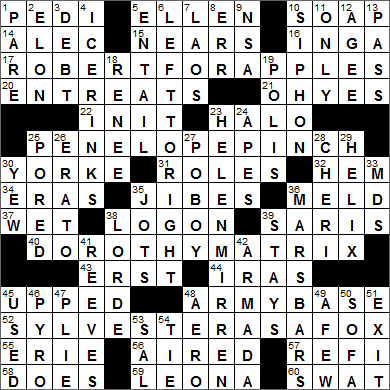 CROSSWORD SETTER: Megan Amram & David Kwong
THEME: Formally
Each of today’s themed answers is a common phrase in which the first word might be interpreted as a nickname. However, that nickname has been written out fully in the answer:

17A. Play a game on Halloween, formally? : ROBERT FOR APPLES (from “bob for apples”)
25A. Be exceedingly frugal, formally? : PENELOPE PINCH (from “penny-pinch”)
40A. Kind of printer, formally? : DOROTHY MATRIX (from “dot matrix”)
52A. Very cunning, formally? : SYLVESTER AS A FOX (from “sly as a fox”)

14. Writer Waugh : ALEC
Alec Waugh was the older brother of the more famous Evelyn Waugh. Both were successful novelists (Evelyn of “Brideshead Revisited” fame), but what I like about Alec is that he supposedly invented the cocktail party. He invited his friends around “for tea” in the twenties, and served them all rum swizzles instead!

16. Swenson of “Benson” : INGA
Inga Swenson is an American actress. Her best known role was “Gretchen Kraus”, the German cook and later housekeeper on the TV show “Benson”. Swenson also appeared in a couple of episodes of “Bonanza” playing the second wife of Ben Cartwright (Lorne Greene), and mother of Hoss Cartwright (Dan Blocker). This was despite the fact that in real life she was actually 4 years younger than Blocker!

17. Play a game on Halloween, formally? : ROBERT FOR APPLES (from “bob for apples”)
Bobbing for apples is a game played on Halloween. Participants must hold their hands behind their backs and grab apples floating in a large basin of water, using only their mouths.

23. Popular first-person shooter video game : HALO
“Halo” is a series of video games that was introduced in 2001. Apparently, there’s a lot of shooting, and a lot of aliens …

25. Be exceedingly frugal, formally? : PENELOPE PINCH (from “penny-pinch”)
A “penny-pincher” is a miser, someone who pinches every penny before handing it over.

30. Radiohead frontman Thom : YORKE
Radiohead is an alternative rock band from England that formed in 1985.

31. Hamlet and Ophelia, e.g. : ROLES
In William Shakespeare’s “Hamlet”, Ophelia is courted by Hamlet, the man himself. Ophelia is the daughter of nobleman Polonius. She dies …

34. Aces have low ones, briefly : ERAS
In the world of baseball, an ace is the best starting pitcher, and usually the pitcher who starts the game on day one of the season. An ace would have a relatively low earned run average (ERA).

37. Speakeasy-goer : WET
The 18th Amendment to the US Constitution was a great victory for the temperance movement (the “dry” movement), and in 1919 ushered in the Prohibition era. Highly unpopular (with the “wet” movement), Prohibition was repealed in 1933 by the 21st Amendment.

39. “Gandhi” garb : SARIS
“Gandhi” is a fabulous film released in 1982 that chronicles the life and times of Mahatma Gandhi. The film stars Ben Kingsley in the title role, and was directed by Sir Richard Attenborough. “Gandhi” won eight Oscars, including the award for Best Picture.

40. Kind of printer, formally? : DOROTHY MATRIX (from “dot matrix”)
A dot matrix printer works somewhat like an old typewriter. The printer head runs back and forth across the stage striking the paper through an inked ribbon, creating the printed characters from small dots.

43. Whilom : ERST
“Erst” is an archaic way of saying “formerly, before the present time”. The term is mostly seen as part of the word “erstwhile”, an adjective meaning “of times past”.

“Whilom” is an archaic term meaning “at one time”, and which can be used as an adjective or adverb.

48. Where many grunts may be heard? : ARMY BASE
The phrase grunt was first applied to a US infantryman during the Vietnam War. The equivalent term for a British infantryman is “squaddie”.

55. Pennsylvania’s northernmost county : ERIE
There are three Erie Counties in the US:

Down
2. North Carolina university : ELON
Elon is a city in the Piedmont region of North Carolina, close to the city of Burlington. Elon University is a private liberal arts school founded in 1889.

4. Winter Olympics venues : ICE RINKS
The first Winter Olympic Games was held in 1924, in Chamonix, France. The Winter and Summer Games were held in the same year until 1992, after which they were staggered so that we have an Olympic Games every two years.

7. French colony until 1953 : LAOS
The official name for the country of Laos is the Lao People’s Democratic Republic. In the Lao language, the country’s name is “Meuang Lao”. The French ruled Laos as part of French Indochina, having united three separate Lao kingdoms. As there was a plural of “Lao” entities united into one, the French added the “S” and so today we tend to use “Laos” instead of “Lao”.

9. Cryptanalysis org. : NSA
The National Security Agency (NSA) was set up in 1952 by President Truman, a replacement for the Armed Forces Security Agency that had existed in the Department of Defense since 1949. The NSA has always been clouded in secrecy and even the 1952 letter from President Truman that established the agency was kept under wraps from the public for over a generation. I really like the organization’s nickname … “No Such Agency”.

12. Jon who wrote and illustrated “Go Hang a Salami! I’m a Lasagna Hog!” : AGEE
Jon Agee is a writer who seems to like words. He writes books for children such as “Palindromania!”, which is a celebration of palindromes. He also wrote “Smart Feller Fart Smeller”, which is filled with spoonerisms.

18. “Hamilton” actress ___ Elise Goldsberry : RENEE
Renée Elise Goldsberry is an actress and singer who is best known to me for playing the attorney Geneva Pine on the TV show “The Good Wife”. Goldsberry also originated the role of Angelica Schuyler Church in the hit Broadway musical “Hamilton”.

“Hamilton” is a 2015 musical based on the life or US Founding Father Alexander Hamilton, as described in the 2004 biography by Ron Chernow. The representations of the main characters is quite ground-breaking. The show is rooted in hip-hop and the main roles such as Hamilton, Thomas Jefferson and George Washington are all played by African-American and Hispanic actors.

Helen Mirren, one of my favorite English actresses, won her Best Actress Oscar for playing the title role in the marvelous 2006 film “The Queen”. Mirren has played three different queens on film and television including Queen Elizabeth II. She also played the title role in the TV drama “Elizabeth I”, and Charlotte of Mecklenburg-Strelitz, wife of the title character in the 1994 film “The Madness of King George”.

24. Monkeys’ uncles? : APES
Apes and monkeys both belong to the order of primates. The most obvious way to distinguish apes from monkeys is by the presence or lack of a tail. Almost all apes have no tail, and almost all monkeys have tails.

26. One of a mythological nonet : ERATO
In Greek mythology, the muses are the goddesses who inspire the creation of literature and the arts. The number of muses is a subject of debate at times, but the most popular view is that there are nine:

27. Hero of New Orleans : PO’ BOY
A po’ boy is a submarine sandwich from Louisiana. There are a lot of theories about where the name came from, and none sound too convincing to me. A po’ boy differs from a regular submarine sandwich in that it uses Louisiana French bread, which is soft in the middle and crusty on the outside.

“Hero” is another name for a submarine sandwich. The hero originated in New York City in the 1800s among Italian immigrants who wanted an Italian sandwich that reminded them of home. The name “hero” was coined in the 1930s, supposedly by a food critic in the “New York Herald Tribune” when he wrote that “one had to be a hero” to finish the gigantic sandwich. Hero is a prevalent term to this day in New York City, reserved for a submarine sandwich with an Italian flavor.

28. French sweetie : CHERI
“Cheri” is a form of familiar address in French, meaning “dear, darling, precious”. “Cheri” is the form used when talking to/of a male, and “cherie” to/of a female.

30. Plant in an English hedge : YEW
The family of trees known as yews propagate by producing a seed surrounded by soft, sweet and brightly colored aril. Birds eat the fruit and then disperse the seed in their droppings. The birds leave the seed undamaged, and so are unharmed by the potent poisons taxine and taxol that are found within the seed. The seeds are highly toxic to humans.

36. Treats since 1932 : MARS BARS
Having lived on both sides of the Atlantic, I find the Mars Bar to be the most perplexing of candies! The original Mars Bar is a British confection (and delicious) first manufactured in 1932. The US version of the original Mars Bar is called a Milky Way. But there is candy bar called a Milky Way that is also produced in the UK, and it is completely different to its US cousin, being more like an American “3 Musketeers”. And then there is an American confection called a Mars Bar, something different again. No wonder I gave up eating candy bars …

39. Doesn’t fold, say : STAYS
That would be in the card game of blackjack, for example.

41. “Speed” star : REEVES
“Speed” is a 1994 action film, starring Keanu Reeves and Sandra Bullock, as well as the late Dennis Hopper as the bad guy.

42. Flotilla : ARMADA
The most famous Armada was the Spanish fleet that sailed against England in order to overthrow Queen Elizabeth I in 1588. It failed in its mission, partly due to bad weather encountered en route. Ironically, the English mounted a similar naval attack against Spain the following year, and it failed as well.

45. Played for a sap : USED
“Sap” is slang for a fool, someone easily scammed. The term arose in the early 1800s in Britain when it was used in “saphead” and “sapskull”. All these words derive from “sapwood”, which is the soft wood found in tree trunks between the bark and the heartwood at the center.

46. Match player? : PYRO
“Pyro” is the combining form of the Greek word for “fire”. A pyromaniac (pyro) is someone with an abnormal desire to start fires, or with a general obsession with fire.

“Swan Lake” is such a delightfully light and enjoyable ballet by Pyotr Ilyich Tchaikovsky. “Swan Lake” tells the story of Odette, a princess turned into a swan by a sorcerer. The ballet also features Odile, Odette’s “evil twin”. Odile is disguised to look like Odette with the goal of tricking the prince to fall in love with her. In the ballet, the roles of Odette and Odile are played by the same ballerina.

48. Commercial lead-in to méxico : AERO-
Aeroméxico is the flag carrier airline of Mexico. Aeroméxico started out in 1934 as Aeronaves de México.

50. Remote hiding place? : SOFA
That would a TV remote.

53. Lab compound, to a chemist : SAL
“Sal” is a pharmacological term meaning “salt”.