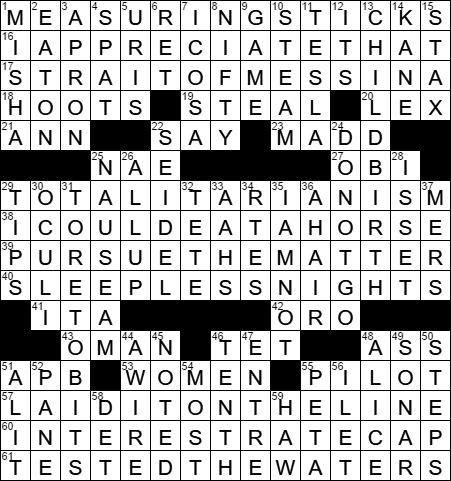 Today’s Wiki-est, Amazonian Googlies
Across
17. Passage between Sicily and the toe of Italy : STRAIT OF MESSINA
Messina is a port, and the third largest city on the Italian island of Sicily. The city’s natural harbor has a curved shape like that of a scythe. When founded by Greek colonists in the 8th century BC, the settlements first name was “Zancle”, from the Greek word for “scythe”. The port gives its name the Strait of Messina, the narrow passage between the island of Sicily and the Italian mainland.

19. Take home, perhaps? : STEAL
That would be in baseball.

27. Band from the East : OBI
The sash worn as part of traditional Japanese dress is known as an obi. The obi can be tied in what is called a butterfly knot.

29. “1984” concern : TOTALITARIANISM
Totalitarianism is the political system in which the state strives for complete control over all aspects of public and private life. One of the more famous leaders in recent times who openly embraced totalitarianism was Benito Mussolini, leader of Italy’s National Fascist Party up until his ousting in 1943.

38. Pre-buffet declaration : I COULD EAT A HORSE
Our word “buffet” comes from the French “bufet” meaning “bench, sideboard”. So, a buffet is a meal served from a “bufet”.

Francisco Pizarro was a Spanish conquistador, the man who led the conquest of the Incan Empire in 1533. Pizarro founded the city of Lima in Peru in 1535. Pizarro’s body was laid to rest in Lima after the son of a rival conquistador assassinated him.

43. Gulf War ally : OMAN
Oman lies on the southeast coast of the Arabian Peninsula and is neighbored by the OAE, Saudi Arabia and Yemen. Oman is a monarchy, and the official name of the state is the Sultanate of Oman. All of the country’s legislative, executive and judiciary power resides with the hereditary sultan.

The Gulf War was a response to Iraq’s invasion and annexation of Kuwait. The first major ground engagement of the conflict was the Battle Khafji. Saddam Hussein ordered his troops to invade Saudi Arabia from Kuwait, resulting in a brief Iraqi occupation of the Saudi city of Khafji. Coalition air and ground forces regained control of the city after just one night.

46. Occasion for dragon dances : TET
The full name for the New Year holiday in Vietnam is “Tet Nguyen Dan” meaning “Feast of the First Morning”, with the reference being to the arrival of the season of spring. Tet usually falls on the same day as Chinese New Year.

The lion dance is a traditional dance in Chinese cultures in which performers move around in an elaborate lion costume. Apparently we Westerners often mistake the lion for a dragon. The Chinese dragon dance does exist, and is similar, but the dancers perform outside of the costume and hold up the dragon on poles.

48. Cousin of a zebra : ASS
The name “zebra” comes from an old Portuguese word “zevra” meaning “wild ass”. Studies of zebra embryos show that zebras are basically black in color, with white stripes that develop with growth. Before this finding, it was believed they were white, with black stripes.

51. Something that might interrupt a flight, for short : APB
An All Points Bulletin (APB) is a broadcast from one US law enforcement agency to another.

53. “Little ___” : WOMEN
“Little Women” is a novel written by American author Louisa May Alcott. The quartet of little women is Meg, Jo, Beth and Amy March. Jo is a tomboy and the main character in the story, and is based on Alcott herself.

60. It’s of no concern to a usurer : INTEREST RATE CAP
“Usury” was originally the name given to the practice of lending money at interest, but the term now refers to lending at excessive rates of interest.

Down
1. Perfume named for Baryshnikov : MISHA
Mikhail “Misha” Baryshnikov started his dancing career with the Kirov Ballet in Leningrad before defecting to Canada in 1974. The only time my wife ever lined up to get an autograph was when she did so outside the stage door after seeing Baryshnikov dance in Syracuse, New York many moons ago. The man is a god in her eyes …

2. Shirley of “Goldfinger” : EATON
The English actress Shirley Eaton was one of the original Bond Girls, and is perhaps one of the most memorable as she appeared as Jill Masterson in “Goldfinger”. It is Masterson who is murdered by covering her body in gold paint.

5. “Mila 18” novelist : URIS
“Mila 18” is a novel by American author Leon Uris that is set during WWII in Warsaw, Poland after the occupation by Germany. The book’s title refers to the bunker that served as headquarters of the Jewish resistance group in the Warsaw Ghetto. The bunker was located at “Ulica Mila 18” (“18 Pleasant Street” in English).

7. Twenty: Prefix : ICOSA-
The prefix “icosa-” is most often seen in the word “icosahedron”, which describes a polyhedron with 20 faces shaped as equilateral triangles. “Icosa-” comes from the Greek “eikosi” meaning “twenty”.

8. Faboo : NIFTY
The slang “faboo” (also “fabu”) is a shortened version of “fabulous”, and has the same meaning.

9. Go, for one : GAME
Go is a strategy board game that was invented in China over 5,500 years ago. Go’s name in Chinese translates as “encircling game”, which reflects the objective of surrounding the largest area on the board.

11. Model X maker : TESLA
Tesla Motors is a manufacturer of electric vehicles based in Palo Alto, California. Tesla is noted for producing the first electric sports car, called the Tesla Roadster. The company followed the sports car with a luxury sedan, the Model S. The Model S was the world’s best selling plug-in electric vehicle of 2015. The Model S platform was then used for as the base for Tesla’s crossover SUV labeled the Model X.

15. Memphis- based record label : STAX
Stax Records was founded in 1957 as Satellite Records. The biggest star to record with Stax was the great Otis Redding.

22. Large beer mug : SEIDEL
A “seidel” is a large glass for beer, and is originally a German term.

25. Ad follower? : NAUSEAM
To do something “ad nauseum” is to do so to a ridiculous degree, to the point of nausea. “Ad nauseum” is the Latin for “to sickness”.

26. Hopeless : ALL UP
After an hour, it was all up for me, no hope that I could solve this crossword …

30. Round openings in domes : OCULI
Oculus (plural “oculi”) is the Latin word for “eye”, and is used in architecture for a circular window.

44. “Bird on ___” (Mel Gibson/Goldie Hawn comedy) : A WIRE
“Bird on a Wire” is a fun film released in 1990, starring Mel Gibson and Goldie Hawn. The movie title comes from the Leonard Cohen song “Bird on the Wire”.

46. Tin anniversary : TENTH
Some traditional gifts for wedding anniversaries are:

47. ___-deux : ENTRE
In French, something might perhaps be discussed “entre deux” (between two) or “entre nous” (between us).

48. Fictional title character who declares “How puzzling all these changes are!” : ALICE
Lewis Carroll wrote “Alice’s Adventures in Wonderland” in 1865, and the sequel called “Through the Looking-Glass, and What Alice Found There” in 1871. Because in the second adventure Alice went through a looking glass, the themes were deliberately chosen to be mirror images of the themes in “Wonderland”. Whereas “Wonderland” begins indoors, is set in summer, and uses playing card imagery, “Looking Glass” begins out of doors, is set in winter and uses images from the game of chess.

49. Sub standard? : SONAR
The British developed the first underwater detection system that used sound waves. Research was driven by defence demands during WWI, leading to production of working units in 1922. This new sound detection system was described as using “supersonics”, but for the purpose of secrecy the term was dropped in favor of an acronym. The work was done under the auspices of the Royal Navy’s Anti-Submarine Division, so ASD was combined with the IC from “superson-ic-s” to create the name ASDIC. The navy even went as far as renaming the quartz material at the heart of the technology “ASDivite”. By the time WWII came along, the Americans were producing their own systems and coined the term SONAR, playing off the related application, RADAR. And so the name ASDIC was deep-sixed …

55. Org. with many banned Super Bowl ads : PETA
People for the Ethical Treatment of Animals (PETA) is famous for ad campaigns featuring implied nudity, often with celebrities appearing front and center. Networks showing the Super Bowl have been known to ban such ads.

59. What’s left on a farm? : HAW
“Haw!” is a command given to a trained animal that is hauling something (like a horse or an ox). “Haw!” is used to instruct the animal to turn to the left. The equivalent command for a right turn is “Gee!” Just to confuse things, the same commands are used in the British Isles but with the opposite meanings. That must be pretty unsettling for jet-setting plow horses …