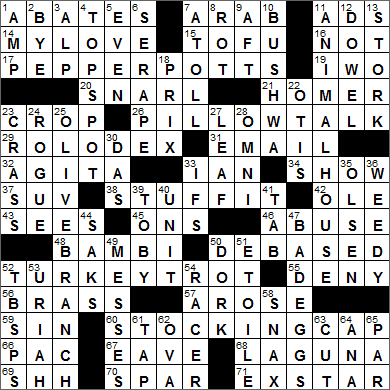 CROSSWORD SETTER: Timothy Polin
THEME: Stuff It!
Each of today’s themed answers starts with something that is often STUFFED:

38A. “Shut up already!” … or what you can do to the start of the answer to each starred clue : STUFF IT!

Today’s Wiki-est, Amazonian Googlies
Across
7. Resident of Oman or Yemen : ARAB
Oman lies on the southeast coast of the Arabian Peninsula and is neighbored by the OAE, Saudi Arabia and Yemen. Oman is a monarchy, and the official name of the state is the Sultanate of Oman. All of the country’s legislative, executive and judiciary power resides with the hereditary sultan.

Yemen is located on the Arabian Peninsula, lying just south of Saudi Arabia and west of Oman. Yemen is the only state on the peninsula that is a republic (its official name is the Republic of Yemen). Everyone over the age of 18 gets to vote, but only Muslims can hold elected office. Yemen has seen many rebellions over the centuries, and has been suffering through a Shia uprising since February 2015.

15. Protein-rich vegan staple : TOFU
Tofu is another name for bean curd, and is a Japanese word meaning just that … bean that has “curdled”. Tofu is produced by coagulating soy milk, using either salt or something acidic. Once the protein has coagulated, the curds are pressed into the familiar blocks. Personally I love tofu, but my wife, she absolutely hates it …

17. *Iron Man’s love interest : PEPPER POTTS
Iron Man is another one of those comic book superheroes, created by Stan Lee for Marvel Comics. The character has become very famous in recent years since the appearance of the 2008 action movie “Iron Man” starring Robert Downey, Jr. in the title role. Iron Man’s love interest, Pepper Potts, is routinely played by Gwyneth Paltrow in the same series of films.

19. ___ Jima : IWO
Iwo Jima is a volcanic island located south of Tokyo that today is uninhabited. The name is Japanese for “Sulfur Island”, referring to the sulfur mining on which Iwo Jima’s economy once depended. There were about a thousand Japanese civilians living on the island prior to WWII. In 1944, there was a massive influx of Japanese military personnel in anticipation of the inevitable US invasion. As the Japanese military moved in, the civilians were forced out and no one has lived there since.

29. Old-fashioned address organizer : ROLODEX
The name Rolodex is short for “rolling index”, and applies to a device that was invented back in 1956. Even in today’s world that is run by computers, Rolodexes are still quite popular.

33. Actor McKellen : IAN
Sir Ian McKellen is a marvelous English actor, someone who is comfortable playing anything from Macbeth on stage to Magneto in an “X-Men” movie. On the big screen, McKellen is very famous for playing Gandalf in “The Lord of Rings”. In the UK Sir Ian is noted for being at the forefront of the campaign for equal rights for gay people, a role he has enthusiastically embraced since the eighties.

37. Ford Escape or Jeep Cherokee, for short : SUV
The Ford Escape is an SUV that was developed jointly with Mazda and introduced in the 2001 model year. The Mazda version of the same vehicle is known as the Tribute.

The Jeep Cherokee is an SUV with some legs. The original SJ model was produced from 1974 until 1983, with derivative models very much alive today.

42. Cheer at a fútbol match : OLE!
“Fútbol” is the Spanish word for football, soccer.

48. Disney fawn : BAMBI
The 1942 Disney classic “Bambi” is based on a book written by Felix Salten called “Bambi, A Life in the Woods”. There is a documented phenomenon known as the Bambi Effect, whereby people become more interested in animal rights after having watched the scene where Bambi’s mother is shot by hunters.

52. *Annual Thanksgiving Day run : TURKEY TROT
“Turkey trots” are long-distance fun runs held around Thanksgiving here in the US, and around Christmas over the UK. The “turkey” reference is to the traditional dish served at both holidays.

A Political Action Committee (PAC) is a private group that works to influence the outcome of a particular election or group of elections. Any group becomes a PAC by law when it receives or spends more than $1,000 for the purpose of influencing the outcome of an election. In 2010 the Supreme Court ruled that PACS that did not make direct contributions to candidates or parties could accept unlimited contributions. These “independent-expenditure only committees” are commonly referred to as “super PACs”.

68. ___ Beach, Calif. : LAGUNA
Laguna Beach is seaside resort city in Orange County in southern California. The city takes its name from nearby Laguna Canyon, and was originally known as Lagonas.

Down
1. Concert haul? : AMP
An electric guitar, for example, needs an amplifier (amp) to take the weak signal created by the vibration of the strings and turn it into a signal powerful enough for a loudspeaker.

6. Mexican shawl : SERAPE
“Serape” is the English pronunciation and spelling of the Spanish word “zarape”. A zarape is like a Mexican poncho, a soft woolen blanket with a hole in the middle for the head. Most serapes have colorful designs that use traditional Mayan motifs.

7. Ring-shaped reef : ATOLL
An atoll is a coral island that is shaped in a ring and enclosing a lagoon. There is still some debate as to how an atoll forms, but a theory proposed by Charles Darwin while on his famous voyage aboard HMS Beagle still holds sway. Basically an atoll was once a volcanic island that had subsided and fallen into the sea. The coastline of the island is home to coral growth which persists even as the island continues to subside internal to the circling coral reef.

10. Complete rubbish : BUSHWA
“Bushwa” is “rubbish, nonsense, rot”. The term originated in the early 1900s and may be a derivative of “bourgeois”.

11. *Classic comedy set at the fictional Faber College : ANIMAL HOUSE
The very funny 1978 movie “Animal House” has the prefix “National Lampoon’s …” because the storyline came out of tales that had already appeared in “National Lampoon” magazine. “Animal House” was to become the first in a long line of successful “National Lampoon” films. The main pledges in the movie are Tom Hulce (Pinto), who later played a magnificent “Amadeus”, and Stephen Furst (Flounder), later played a regular role on television’s “Babylon 5”.

13. Bird on a birth announcement : STORK
In German and Dutch society, storks resting on the roof of a house were considered a sign of good luck. This tradition led to nursery stories that babies were brought to families by storks.

22. Soul singer Redding : OTIS
Otis Redding is often referred to as the “King of Soul”, and what a voice he had. Like so many of the greats in the world of popular music it seems, Redding was killed in a plane crash, in 1967 when he was just 26 years old. Just three days earlier he had recorded what was to be his biggest hit, “(Sittin’ On) The Dock of the Bay”.

35. Jimmy ___, reporter for the Daily Planet : OLSEN
In the “Superman” stories, Jimmy Olsen is a cub photographer who works on the “Daily Planet” newspaper with Clark Kent and Lois Lane.

39. ___ Keith, singer with 20 #1 country hits : TOBY
Toby Keith is a country music singer from Clinton, Oklahoma. One of Keith’s number one hits is a 2003 duet with Willie Nelson called “Beer for My Horses”.

41. Indenting computer key : TAB
Like most features on our computer keyboards, the tab key is a hangover from the days of typewriters. When using a typewriter, making entries into a table was very tedious, involving lots of tapping on the spacebar and backspace key. So, a lever was added to typewriters that allowed the operator to “jump” across the page to positions that could be set by hand. Later this was simplified to a tab key which could be depressed, causing the carriage to jump to the next tab stop in much the same way that the modern tab key works on a computer.

50. Nerd : DORK
I consider “dork” to be pretty offensive slang. It emanated in the sixties among American students, and has its roots in another slang term, a term for male genitalia.

51. Prima ballerina : ETOILE
In the world of ballet, the étoile is the leading dancer in a company (male or female). “Étoile” is the French word for “star”.

53. Dickens’s ___ Heep : URIAH
Uriah Heep is a sniveling insincere character in the novel “David Copperfield” by Charles Dickens. The character is such a “yes man” that today, if we know someone who behaves the same way, then we might call that person a “Uriah Heep”.

64. Santa ___, Calif. : ANA
Santa Ana is the county seat of Orange County, California and takes its name from the Santa Ana River that runs through the city.