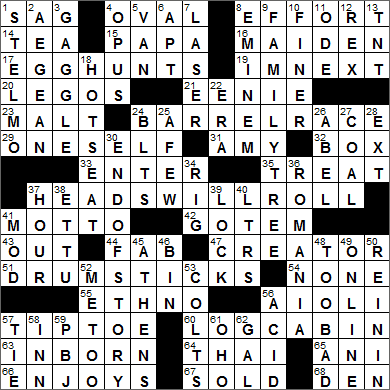 CROSSWORD SETTER: Sam Trabucco
THEME: Heads Will Roll
The start (HEAD) of each of today’s themed answers is something that WILL ROLL:

Today’s Wiki-est, Amazonian Googlies
Across
8. What to get an “E” for : EFFORT
Apparently the phrase “E for effort” originated as a WWII campaign in the US to help boost productivity in factories.

17. Easter Day activities : EGG HUNTS (giving “egg roll”)
Tradition states that the first Easter Egg Roll in the nation’s capitol was staged by Dolley Madison, wife of President James Madison. The inaugural event was held in 1814, but not at the White House, where it is held today. That first Egg Roll was held on the grounds of the US Capitol. After a new lawn was planted in 1877, Congress passed a law making it illegal to use the lawn as a children’s playground (boo! hiss!), and so President Rutherford and his wife Lucy brought the Egg Roll to the White House (hurrah!).

20. Detachable toy blocks : LEGOS
Lego is manufactured by Lego Group, a privately held company headquartered in Billund, Denmark. The company was founded by a carpenter called Ole Kirk Christiansen in 1934 and the now-famous plastic interlocking blocks were introduced in 1949. The blocks were originally sold under the name “Automatic Binding Bricks” but I think “Lego” is easier to remember! The name “Lego” comes from the Danish term “leg godt” meaning “play well”.

23. Grain used in making beer : MALT
Malt is germinated cereal grains that have been dried. The cereal is germinated by soaking it in water, and then germination is halted by drying the grains with hot air.

24. Competition in a rodeo ring : BARREL RACE (giving “barrel roll”)
A barrel roll is an aerial stunt in which a plane makes a complete rotation around the longitudinal axis. The manoeuvre is so called as the corkscrew path that the aircraft executes makes it appear as though it is rotating through the inside of an enormous barrel.

31. “Trainwreck” star Schumer : AMY
Amy Schumer is a stand-up comedian, and an alumna of the reality TV show “Last Comic Standing”, in which she placed fourth. Schumer now has her own comedy series “Inside Amy Schumer”, which airs on Comedy Central. Amy is a first cousin once removed of Chuck Schumer, the senior US Senator from New York.

“Trainwreck” is a romantic comedy released in 2015 that brings together the talents of Judd Apatow as director and Amy Schumer as writer. Schumer also stars.

41. “In God We Trust,” for the United States : MOTTO
“In God we trust” was adopted as the official motto of the US in 1956. The phrase apparently originated in the national anthem “The Star-Spangled Banner”, the words of which were written during the War of 1812. The actual wording in the anthem is “And this be our motto: ‘In God is our trust’”. Over time, this lyric evolved to “In God we trust”.

43. Openly gay : OUT
Back in the 1950s, to come “out of the closet” was to admit to being an alcoholic. By the seventies, the phrase mainly referred to gay people shrugging off secrecy about their orientation.

51. Legs at KFC : DRUMSTICKS (giving “drumroll”)
The famous “Colonel” of Kentucky Fried Chicken fame was Harland Sanders, an entrepreneur from Henryville, Indiana. Although not really a “Colonel”, Sanders did indeed serve in the military. He enlisted in the Army as a private in 1906 at the age of 16, lying about his age. He spent the whole of his time in the Army as a soldier in Cuba. It was much later, in the 1930s, that Sanders went into the restaurant business making his specialty deep-fried chicken. By 1935 his reputation as a “character” had grown, so much so that Governor Ruby Laffoon of Kentucky gave Sanders the honorary title of “Kentucky Colonel”. Later in the fifties, Sanders developed his trademark look with the white suit, string tie, mustache and goatee. When Sanders was 65 however, his business failed and in stepped Dave Thomas, the founder of Wendy’s. Thomas simplified the Sanders menu, cutting it back from over a hundred items to just fried chicken and salads. That was enough to launch KFC into the fast food business. Sanders sold the US franchise in 1964 for just $2 million and moved to Canada to grow KFC north of the border. He died in 1980 and is buried in Louisville, Kentucky. The Colonel’s secret recipe of 11 herbs and spices is indeed a trade secret. Apparently there is only one copy of the recipe, a handwritten piece of paper, written in pencil and signed by Colonel Sanders. Since 2009, the piece of paper has been locked in a computerized vault surrounded with motion detectors and security cameras.

56. Garlicky mayo : AIOLI
To the purist, especially in Provence in the South of France, the “home” of aioli, aioli is prepared just by grinding garlic with olive oil. However, other ingredients are often added to the mix, particularly egg yolks.

60. Early home for Lincoln : LOG CABIN (giving “logroll”)
Abraham Lincoln was born in a one-room log cabin in Hardin County, Kentucky making him the first president born in the West. His formal education was limited to a year and a half of schooling, but fortunately for us, Lincoln was an avid reader and educated himself over the years. Even though he was from a rural area, he avoided hunting and fishing because he did not like to kill animals even for food.

The log-rolling competition traditionally engaged in by lumberjacks is referred to as “Roleo”.

64. Bangkok native : THAI
Bangkok is the capital city of Thailand. The exact etymology of the name “Bangkok” seems unclear, although “bang” is a Thai word meaning “a village situated on a stream”.

67. Red-lettered announcement added to a real estate sign : SOLD
The terms “realty” and “real estate” date back to the later 1600s, and are derived from the earlier meaning “real possession”, something one owns that is tangible and real.

Down
1. Patron of mariners : ST ELMO
St. Elmo is the patron saint of sailors. He lends his name to the electrostatic weather phenomenon (often seen at sea) known as St. Elmo’s fire. The “fire” is actually a plasma discharge caused by air ionizing at the end of a pointed object (like the mast of a ship), something often observed during electrical storms.

2. Sea crossed by the Argonauts : AEGEAN
The Aegean Sea is that part of the Mediterranean that lies between Greece and Turkey. Within the Aegean Sea are found the Aegean Islands, a group that includes Crete and Rhodes.

3. Group of geese : GAGGLE
A collection of geese is referred to as a “gaggle” when on the ground. When geese are in v-formation in flight, they are referred to collectively as a “skein”.

4. Numbered musical work : OPUS
The Latin for “work” is “opus”, with the plural being “opera”.

5. What may help you make your move? : VAN
The vehicle we call a “van” takes its name from “caravan”, a shortening of the older term. Back in the 1600s, a caravan was a covered cart. We still used the term “caravan” in Ireland to mean what we call a mobile home or recreational vehicle here in the US.

8. “8 Mile” rapper : EMINEM
The movie “8 Mile” stars Eminem as a young rap artist in Detroit, and feature the song “Lose Yourself” that was performed and written by Eminem. The song won Eminem the 2002 Oscar for Best Original Song, making him the first rap artist to be so honored.

10. Like sand vis-à-vis gravel : FINER
We can use the French phrase “vis-à-vis” as a preposition meaning “compared with”. When used as an adverb or adjective, it means “face to face”, which is a more literal translation from French.

13. Detonation material : TNT
“TNT” is an abbreviation for trinitrotoluene. Trinitrotoluene was first produced in 1863 by the German chemist Joseph Wilbrand, who developed it for use as a yellow dye. TNT is relatively difficult to detonate so it was on the market as a dye for some years before its more explosive properties were discovered.

24. Usually toasted sandwiches, for short : BLTS
The BLT (bacon, lettuce and tomato) is the second most popular sandwich in the US, after the plain old ham sandwich.

26. Brother of Cain : ABEL
According to the Bible, Adam and Eve had several children, although only the first three are mentioned by name: Cain, Abel and Seth.

27. Big product of Kentucky : COAL
The Eastern Coalfield in Kentucky is the most productive coalfield in the whole of the US.

36. Bucharest’s home : ROMANIA
The city of Bucharest has been the capital of Romania since 1862. A native of the city is known as a “Bucharester”.

38. “___, Brute!” : ET TU
It was Shakespeare who popularized the words “Et tu, Brute?” (And you, Brutus?), in his play “Julius Caesar”, although the phrase had been around long before he penned his drama. It’s not known what Julius Caesar actually said in real life just before he was assassinated on the steps of the Senate in Rome.

41. “The ___ Squad” of TV and film : MOD
The 1999 movie “The Mod Squad” was an adaptation of the seventies television show of the same name. The part of Lincoln “Linc” Hayes was played by Omar Epps, Claire Danes played Julie Barnes and Giovanni Ribisi played Peter Cochran.

45. Home to Plato and Aristotle : ATHENS
Aristotle was actually a student of Plato in Ancient Greece (and in turn, Plato was a student of Socrates). Aristotle’s most famous student was Alexander the Great.

49. Connected to Wi-Fi, say : ONLINE
“Wi-Fi” is nothing more than a trademark, a trademark registered by an association of manufacturers of equipment that use wireless LAN (Local Area Network) technology. A device labeled with “Wi-Fi” has to meet certain defined technical standards, basically meaning that the devices can talk to each other. The name “Wi-Fi” suggests “Wireless Fidelity”, although apparently the term was never intended to mean anything at all.

53. Indianapolis footballers : COLTS
The Indianapolis Colts professional football team has been in Indiana since 1984. The team traces its roots back to the Dayton Triangles, one of the founding members of the NFL created in 1913. The Dayton Triangles relocated and became the Brooklyn Dodgers in 1930, and then the Brooklyn Tigers in 1944. The team merged with the Boston Yanks in 1945, so then played in Boston. The Yanks were moved to New York in 1949, and then to Dallas in 1952 as the Dallas Texans. The Texan franchise moved to Baltimore in 1953, forming the Colts. The Colts made their last move in 1984, to Indianapolis. Whew!

56. Boric ___ : ACID
Boric acid is a weak acid that usually comes as a white powder for domestic use. The powder can be dissolved in water and used as an antiseptic.

58. Word after Holiday or Days : INN
The Days Inn hotel chain was founded in 1970 by a real estate developer called Cecil B. Day. One of the features of a Days Inn hotel in those early days was an on-site gas pump, which dispensed gasoline at discount prices.