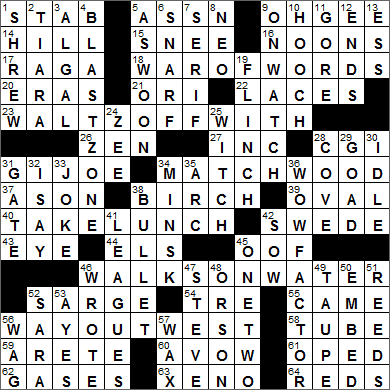 18A. Heated argument : WAR OF WORDS
23A. Take while no one’s looking, say : WALTZ OFF WITH
46A. Exhibits a superhuman ability : WALKS ON WATER
56A. 1937 Laurel and Hardy romp in the frontier : WAY OUT WEST

15. Bygone dagger : SNEE
A “snee” is a type of dagger formerly used by Scottish highlanders.

16. Middays : NOONS
Our word “noon”, meaning “midday”, comes from the Latin “nona hora” that translates as “ninth hour”. Back in Ancient Rome, the “ninth hour” was three in the afternoon. Over the centuries, traditions such as church prayers and “midday” meals shifted from 3 p.m. to 12 p.m., and so “noon” became understood as 12 noon.

17. Sitar piece : RAGA
Raga isn’t really a type of music, but has been described as the “tonal framework” in which Indian classical music is composed. Ravi Shankar was perhaps the most famous raga virtuoso (to us Westerners). Western rock music with a heavy Indian influence might be called raga rock.

The sitar has been around since the Middle Ages. The sitar is a stringed instrument that is played by plucking, and is used most often in Hindustani classical music. In the West we have been exposed to the instrument largely through the performances of Ravi Shankar and some music by George Harrison of the Beatles, a onetime student of Shankar.

26. ___ Buddhist : ZEN
Zen is a Buddhist school that developed its own tradition in China back in the 7th century AD. Zen is a Japanese spelling of the Chinese word “chan”, which in turn derives from the Sanskrit word “dhyana” meaning “meditation”.

“FX” is an abbreviation for “effects”, as in “special effects”.

31. Iconic action figure : GI JOE
G.I. Joe was the original “action figure”, the first toy to carry that description. G.I. Joe first hit the shelves in 1964. There have been a few movies based on the G.I. Joe figure, but, more famous than all of them I would say is the 1997 movie “G.I. Jane” starring Demi Moore in the title role. I thought that “G.I. Jane” had some potential, to be honest, but it really did not deliver in the end.

37. “Unto us ___ is given”: Isaiah : A SON
According to the Bible’s, Book of Isaiah:
For unto us a child is born, unto us a son is given: and the government shall be upon his shoulder: and his name shall be called Wonderful, Counselor, The mighty God, The everlasting Father, The Prince of Peace.

38. Tree with papery bark : BIRCH
The bark of birch trees (known as “birchbark”) is a useful material that has been used since prehistoric times as a building, crafting and writing material. Birchbark is readily cut, bent and sewn and resembles cardboard, although unlike cardboard, it is also water-resistant. Birchbark was a popular material with Native Americans, used for making canoes, wigwams, scrolls and maps.

42. Stockholm native : SWEDE
Stockholm is the capital of Sweden and most populous city in the country. Over one fifth of all Swedish residents live in Stockholm.

43. CBS symbol : EYE
CBS is the second-largest broadcaster in the world, second only to the BBC in the UK. CBS introduced its “eye” logo in 1951.

52. Beetle Bailey’s superior : SARGE
Sgt. Snorkel (“Sarge”) is Beetle Bailey’s nemesis in the cartoon strip that bears his name. Snorkel has a dog called Otto that he dresses up to look just like himself. Otto started off as a regular dog, but artist Mort Walker decide to draw him more like his owner, and soon Otto became a big hit.

58. London subway, with “the” : TUBE
The official name “London Underground”, used for the city’s train-based mass transit system, is a little deceptive. In fact, over half of the network’s track is “over ground”, with the underground sections reserved for the central areas. It is the oldest subway system in the world, opening in 1863. It was also the first system to use electric rolling stock, back in 1890. “The Tube”, as it is known by Londoners, isn’t the longest subway system in the world though. That honor belongs to the Shanghai Metro. My personal favorite part of the Tube is the Tube map! It is a marvel of design …

59. Mountain ridge : ARETE
An arete is ridge of rock defining the border between two parallel valleys that have been formed by glaciation. If this ridge is rounded, it is called a “col”. However if it is “sharpened”, with rock falling way due to successive freezing and thawing, then it is called an “arete”. “Arête“ is the French word for “fish bone”.

62. Argon and xenon : GASES
The chemical element argon has the symbol Ar. Argon is a noble gas, and so by definition is relatively nonreactive. The name “argon” comes from the Greek word for “lazy, inactive”. There’s a lot of argon around, as it is the third-most abundant gas in our atmosphere.

Down
1. Shakespeare’s “The Taming of the ___” : SHREW
William Shakespeare’s play “The Taming of the Shrew” is about a courting couple. The male is Petruchio, a gentleman of Verona, and the female is Katharina, the so-called “shrew”. As the play progresses, the “shrew” is “tamed” and becomes an “obedient” bride … a controversial storyline in the contemporary world, to say the least. Regardless, modern adaptations have been made, including 1948’s Broadway musical “Kiss Me Kate” and the 1999 romantic comedy “10 Things I Hate About You”.

6. Wolf (down) : SNARF
“To snarf down” is to gobble up, to eat voraciously. “Snarf” is a slang term that is probably related to “scarf”, which has the same meaning.

7. Feature of a font : SERIF
Serifs are details on the ends of characters in some typefaces. Typefaces without serifs are known as sans-serif, using the French word “sans” meaning “without” and “serif” from the Dutch “schreef” meaning “line”. Some people say that serif fonts are easier to read on paper, whereas sans-serif fonts work better on a computer screen. I’m not so sure though …

8. Opposite of paleo- : NEO-
The prefix “paleo-” means “prehistoric, primitive”. It comes from the Greek word “palaios” which means “old, ancient”. The prefix “neo-” would be the opposite, meaning “new, recent”.

10. Illegal liquor, informally : HOOCH
In the Klondike gold rush, a favorite tipple of the miners was “Hoochinoo”, a liquor made by the native Alaskans. Soon after “hooch” (also “hootch”) was adopted as a word for cheap whiskey.

11. What’s seen in “Saw” : GORE
I know just enough about the “Saw” series of films that I won’t be watching them. They fall into the horror genre and there is a lot of blood, gore and cruelty.

34. Capital of Belarus : MINSK
Minsk is the capital of Belarus, formerly known as the Belorussian Soviet Socialist Republic. One of Minsk’s more infamous residents was Lee Harvey Oswald who lived there from 1960 to 1962.

41. “Twenty Thousand ___ Under the Sea” : LEAGUES
The Jules Verne sci-fi novel “Twenty Thousand Leagues Under the Sea” was first published in 1869-1870 as a serial in a French magazine. Star of the novel (to me) is Captain Nemo’s magnificent submarine called the Nautilus. The distance traveled by the Nautilus is the “20,000 leagues” in the title, not a depth. 20,000 leagues is about three times the circumference of the Earth.

47. Rock’s Perry or Tyler : STEVE
Steve Perry was the lead singer of the band Journey for much of the eighties and nineties.

Steven Tyler is the lead singer of the rock band Aerosmith, which is based in Boston. Tyler likes to scream a lot on stage and is the known as the “Demon of Screamin’”. Tyler’s daughter is the actress Liv Tyler.

49. Stocking shade : TAUPE
Taupe is a dark, gray-brown color. The word “taupe” comes from the Latin name of the European Mole, which has skin with the same color.

51. Clarinets and such : REEDS
The clarinet is a lovely-sounding instrument, isn’t it? The name comes from the Italian word “clarino” meaning “trumpet” with the “-et” suffix indicating “small”.

52. Fleetwood Mac hit : SARA
Fleetwood Mac was founded in 1967 in London. The band was started by Peter Green, and he chose the name from two friends in former bands (named Fleetwood and McVie). This is despite the fact the drummer’s name happens to be Mick Fleetwood.