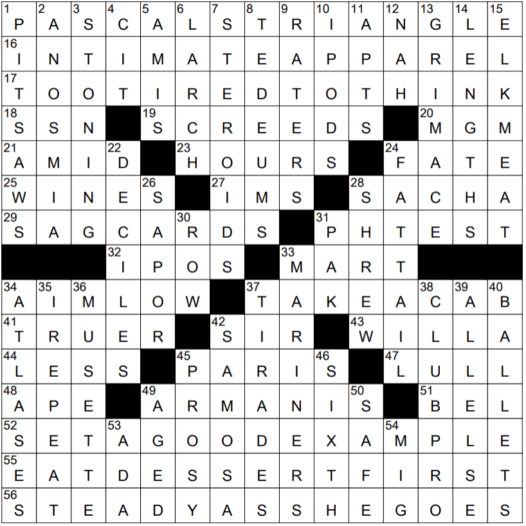 16 Teddies and such : INTIMATE APPAREL

The item of lingerie known as a teddy can also be called “camiknickers”. The alternative name was used when the one-piece garment was introduced in the twenties, a combination of a camisole and panties (aka “knickers”).

Sacha Gervasi is journalist, screenwriter and film director from London.

In the world of acoustics, one bel is equal to ten decibels (dBs). The bel is named in honor of the inventor of the telephone, Alexander Graham Bell.

A whipsaw (also “pit saw”) is a two-man saw that was originally designed for use in a saw pit. A large log would be placed on top of the pit. The “pit-man” would work under the log, and the “top-man” above it. The sawing action was in the vertical, with the blade cutting on the downstroke.

Lumber from the larch is valued because it is resistant to rot. The wood is particularly efficacious in boatbuilding and for exterior cladding of buildings. A more prosaic application is for fence posts that are placed in the ground.

10 Shuffles and such : IPODS

The iPod Shuffle was introduced in 2005 and is the smallest of Apple’s line of audio players. The Shuffle was the first iPod to use flash memory.

28 Mammal in the Soricidae family : SHREW

33 Only M.L.B. team never to have played in a World Series : MARINERS

“Knapsack” is a Low German word describing a bag with straps designed to be carried on the back. The word “knapsack” probably comes from the German verb “knappen” meaning “to eat”.

46 Like the most recent Pope Paul among all popes named Paul : SIXTH

Pope Paul VI was head of the Roman Catholic Church from 1963 to 1978. He was born in the village of Concesio in Lombardy, Italy as Giovanni Battista Montini. The future pope’s mother was from a noble family, and his father was a member of the Italian parliament.