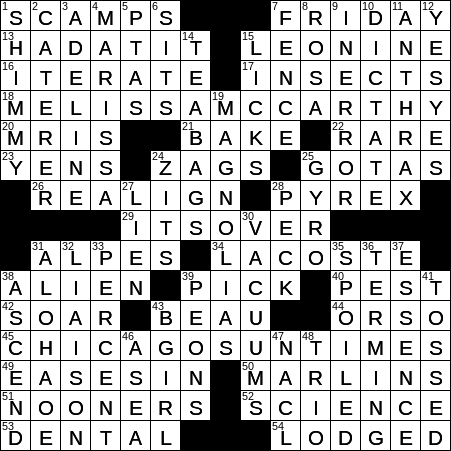 Today’s Wiki-est, Amazonian Googlies
Across
7. Man ___ : FRIDAY
In Daniel Defoe’s 1719 novel “Robinson Crusoe”, the castaway encounters a companion that Crusoe calls “Friday”, because the two first met on that day. Friday soon becomes his willing servant. This character is the source of our terms “Man Friday”, “Guy Friday” and “Girl Friday”, which are used to describe a particularly competent and loyal assistant.

15. Like some roars : LEONINE
Something described as “leonine” has the characteristics of a lion, is strong and regal. “Leo” is Latin for “lion”.

18. Player of Molly on “Mike & Molly” : MELISSA MCCARTHY
Melissa McCarthy is an actress and comedian who is perhaps best known on the small screen for playing Molly on the sitcom “Mike & Molly”, and on the big screen for playing the wild and wacky Megan Price in the 2011 comedy “Bridesmaids”. According to “Forbes”, McCarthy was the third-highest paid actress in 2014/2015, after Jennifer Lawrence and Scarlett Johansson.

20. Some hosp. tests : MRIS
An MRI (Magnetic Resonance Imaging) uses powerful magnetic fields to generate its images so there is no exposure to ionizing radiation (such as X-rays). We used MRI equipment in our chemistry labs at school, way back in the days when the technology was still called Nuclear Magnetic Resonance Imaging (NMRI). Apparently the marketing folks didn’t like the term “nuclear” because of its association with atomic bombs, so now it’s just called MRI.

22. Like tritium and triplets : RARE
There are three naturally occurring isotopes of hydrogen. The most common isotope is what we ordinarily refer to as hydrogen, and it has no neutrons. This particular isotope is sometimes called “protium”. The isotope with one neutron is called “deuterium”. When paired with two atoms of oxygen, deuterium forms “heavy water”. The hydrogen isotope with two neutrons is called “tritium”. Tritium is radioactive, with a half-life of 12.3 years.

23. Thirsts : YENS
The word “yen”, meaning “urge”, has been around in English since the very early 1900s. It comes from the earlier word “yin” imported from Chinese, which was used in English to describe an intense craving for opium!

25. Received high marks : GOT AS
Was graded A in several tests.

28. Flask material : PYREX
Pyrex is a brand of glassware that was developed by Corning. As well as being used in bakeware and laboratory glassware, Pyrex is often the material of choice for optics in large telescopes used in astronomy. Corning’s PYREX (note the capital letters) is made from borosilicate glass, the main ingredients of which are silica and boron trioxide. Such Corning products are only available now outside of the US. Corning divested its consumer products division in 1998, resulting in the formation of World Kitchen. World Kitchen purchased the rights to the “Pyrex” name in the US, and market it as “pyrex” (all lowercase letters). So “PYREX” glassware is made from borosilicate glass, and “pyrex” products are made from cheaper tempered soda-lime glass.

29. Gist of a Dear John letter : IT’S OVER
No one seems to be very certain of the origin of the phrase “that’s all she wrote”. One popular story though is that it stems from the unfortunate “Dear John” letters that some soldiers received during WWII.

31. Mont Cervin and others : ALPES
Matterhorn is the German name for the famous Alpine peak that lies on the border between Switzerland and Italy. The Italian name for the same mountain is Monte Cervino, and the French call it Mont Cervin. “Matterhorn” comes from the German words Matte and Horn meaning “meadow” and “peak”. Cervino and Cervin come from the Latin name for the mountain, Mons Silvius meaning “Forest Mountain”.

34. Tennis star nicknamed Le Crocodile : LACOSTE
René Lacoste was a French tennis player who went into the clothing business, and came up with a more comfortable shirt that players could use. This became known as a “tennis shirt”. When it was adopted for use in the sport of polo, the shirts also became known as “polo shirts”. And then the “golf shirt” is basically the same thing.

43. Sender of a billet-doux : BEAU
Billet-doux is a French term for a love letter. A “billet” is a short note, and “doux” means sweet.

45. Where Roger Ebert’s reviews appeared for 47 years : CHICAGO SUN-TIMES
Roger Ebert was a film critic for “The Chicago Sun-Times” for 50 years. He also co-hosted a succession of film review television programs for over 23 years, most famously with Gene Siskel until Siskel passed away in 1999. Siskel and Ebert famously gave their thumbs up or thumbs down to the movies they reviewed. Ebert was the first film to win the Pulitzer Prize for Criticism, which he did in 1975. He was diagnosed and treated for thyroid cancer in 2002, and finally succumbed to a recurrence of the disease in April 2013.

50. Team “spawned” in 1993 : MARLINS
The Miami Marlins baseball team started out life in 1993 as the Florida Marlins. The franchise changed its name to the Miami Marlins in 2011 when it relocated to the newly constructed Marlins Park.

51. Certain trysts : NOONERS
In its most general sense, a tryst is a meeting at an agreed time and place. More usually we consider a tryst to be a prearranged meeting between lovers. The term comes from the Old French “triste”, a waiting place designated when hunting. Further, a tryst taking place at lunchtime is sometimes referred to as a “nooner”.

52. “The great antidote to the poison of enthusiasm and superstition,” per Adam Smith : SCIENCE
Adam Smith was a pioneer in the field of “political economy”, an original term used for the study of production and trade and their relationship with law, government and the distribution of wealth. Adam Smith’s great work is called “The Wealth of Nations”, published in 1776. The book was a big hit within his own lifetime and went a long way to earning him the reputation as the father of modern economics and capitalism. Smith coined the phrase “the invisible hand of the market”, describing his assertion that a marketplace tends to self-regulate.

Down
3. Virginia Woolf’s given name at birth : ADELINE
Virginia Woolf was an English author active in the period between the two World Wars. Woolf’s most famous novels were “Mrs. Dalloway”, “To the Lighthouse” and “Orlando”. She also wrote a long essay entitled “A Room of One’s Own” in which she states “A woman must have money and a room of her own if she is to write fiction.”

19. Pair on Mississippi’s state quarter : MAGNOLIAS
The Mississippi state quarter features two magnolia blossoms, and was first issued on October 15, 2002. Mississippi is known as the home to many stately Magnolia trees, giving it the nickname “the Magnolia State”.

24. Dreaded dermal development : ZITS
The slang term “zit”, meaning “pimple”, came into the language in 1966, but no one seems to know its exact derivation.

25. Street cart offering : GYRO
A gyro is a traditional Greek dish of meat roasted on a tall vertical spit that is sliced from the spit as required. Gyros are usually served inside a lightly grilled piece of pita bread, along with tomato, onion and tzatziki (a yogurt and cucumber sauce).

27. Home security measure : LIEN
A lien is the right that one has to retain or secure someone’s property until a debt is paid. When an individual takes out a car loan, for example, the lending bank is usually a lien holder. The bank releases the lien on the car when the loan is paid in full.

31. Song sung to Lilo in “Lilo & Stitch” : ALOHA ‘OE
“Aloha ‘Oe” is a song of Hawaii composed by Liliuokalani, the last monarch of Hawaii and her only queen. The title translates as “Farewell to Thee”.

39. Drones : PEONS
A peon is a lowly worker with no real control over his/her working conditions. The word comes into English from Spanish, in which language it has the same meaning.

43. Female hip-hop fan : B-GIRL
A “b-boy” is a male fan of rap-music and breakdancing. Apparently the term comes from either “Bronx boy” or “break boy”. The corresponding female is a “b-girl”.

48. The Magi, e.g. : TRIO
“Magi” is the plural of the Latin word “magus”, a term applied to someone who was able to read the stars. Hence, magi is commonly used with reference to the “wise men from the East” who followed the star and visited Jesus soon after he was born.