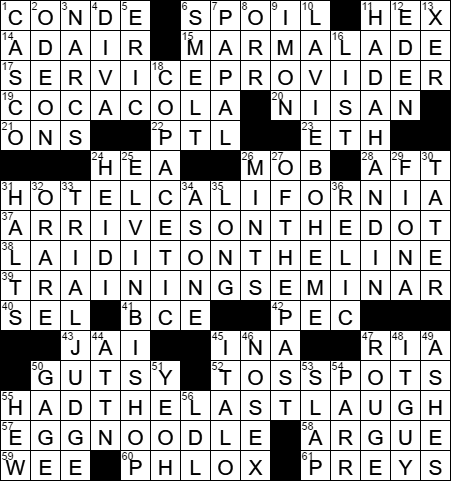 11. Voodoo doll action : HEX
“Hexen” is a German word meaning “to practice witchcraft”. The use of the word “hex” in English started with the Pennsylvania Dutch in the early 1800s.

14. “Robin ___” (old Irish ballad) : ADAIR
“Robin Adair” is an old Irish ballad about a real Irishman, a surgeon-colonel in the British army. The lyrics were written by Adair’s wife, Lady Caroline Keppel, in praise of her husband. Written in the 1750s, “Robin Adair” gets a mention in Jane Austen’s 1815 novel “Emma”.

19. Big name in pop : COCA-COLA
The first cola drink to become a commercial success was Coca-Cola, soon after it was invented by a druggist in 1886. That original Coca-Cola was flavored mainly with kola nuts and vanilla. The formulation was based on an alcoholic drink called Coca Wine that had been on sale for over twenty years.

22. Scandalous ’80s initials : PTL
“The PTL Club” was a daily television show hosted by televangelists Jim and Tammy Faye Bakker. PTL is short for both “Praise the Lord” and “People that Love”. The show ended its run of over ten years in 1987 when it was revealed that Jim Bakker was involvement in financial and sexual scandals. Bakker served 5 years in jail, part of an 18-year sentence.

“Nowhere Man” is an early song by the Beatles, released in 1966. “Nowhere Man” was one of the first songs that John Lennon wrote that was more philosophical than romantic in nature, indicative of songs to come. Apparently, Lennon himself is the inspirations for the “Nowhere Man” persona.

26. Black Friday scene : MOB
In the world of retail, “Black Friday” is the day after Thanksgiving in the US. Black Friday is when many stores start the holiday shopping season, and so offer deep discounts to get ahead of the competition.

31. Server of pink champagne on ice, in song : HOTEL CALIFORNIA
“Hotel California” is the title song from a 1976 album released by the Eagles. The song is allegorical in nature, and tells of a luxury hotel where one can check in, but never check out. The hotel is a symbol for the California music industry of the seventies that destroyed so many people who were trapped by it. There is an unrelated Hotel California in San Francisco, my favorite of the city’s “boutique” and reasonable priced places to stay.

41. Pre-A.D. : BCE
The designations Anno Domini (AD, “year of Our Lord”) and Before Christ (BC) are found in the Julian and Gregorian calendars. The dividing point between AD and BC is the year of the conception of Jesus, with AD 1 following 1 BC without a year “0” in between. The AD/BC scheme dates back to AD 525, and gained wide acceptance soon after AD 800. Nowadays a modified version has become popular, with CE (Common/Christian Era) used to replace AD, and BCE (Before the Common/Christian Era) used to replace BC.

42. Incline press target, briefly : PEC
“Pecs” is the familiar term for the chest muscle, more correctly known as the pectoralis major muscle. “Pectus” is a the Latin word for “breast, chest”.

45. Like Beethoven’s Symphony No. 7 : IN A
If I had to name which of Beethoven’s symphonies I listen to most often, at the top of the list comes the 7th followed closely by the 9th, and then the 5th a little further down. But that four-note opening of the 5th … that is superb …

50. Full of moxie : GUTSY
Back as far as 1876, Moxie was a brand name of a “medicine” peddled with the claim that it “built up your nerve”. In 1924, Moxie was registered as a trademark for a bitter, non-alcoholic beverage (no more claims of nerve-building). And we’ve used the term “moxie” to mean “nerve” ever since …

60. Flower known to attract butterflies : PHLOX
Phlox is a genus of flowering plants found mainly in North America. A common name for the plant is Jacob’s Ladder.

Down
1. Maine’s ___ Bay : CASCO
Casco Bay is on the southern part of the Maine coast, an inlet on the Gulf of Maine. The city of Portland lies on Casco Bay.

2. Classic theater name : ODEON
In Ancient Greece an odeon (also “odeum”) was like a small theater, with “odeon” literally meaning a “building for musical competition”. Odea were used in both Greece and Rome for entertainments such as musical shows and poetry readings.

3. Crack investigators? : NARCS
“Narc” is a slang term for a law enforcement officer who tracks down criminals associated with illegal drugs. “Narc” is short for “narcotics officer”.

Crack cocaine is manufactured from powdered cocaine in a simple process. The powder is dissolved in an aqueous solution of baking soda, and the liquid is boiled off leaving a solid residue. The residue is broken up into chunks, and sold as crack. Apparently the crack is smoked, delivering an awful lot of cocaine into the body very quickly though the lungs. Sounds like nasty stuff …

4. Agent’s handful, say : DIVA
The term “diva” comes to us from Latin via Italian. “Diva” is the feminine form of “divus” meaning “divine one”. The word is used in Italy to mean “goddess” or “fine lady”, and especially is applied to the prima donna in an opera. We often use the term to describe a singer with a big ego.

6. Silvery fish : SMELT
Smelt is the name given to several types of small silvery fish, examples being Great Lake smelts and whitebait smelts.

7. Like some bulls : PAPAL
A “bulla” (also “bull”) is a type of seal impression. A Papal Bull is a formal document from the Vatican that has such a seal attached, hence the name of the document.

8. Crash-prone “Catch-22” pilot : ORR
“Catch-22” is a novel by Joseph Heller set during WWII. The title refers to absurd bureaucratic constraints that soldiers had to suffer. Heller’s “Catch 22” was invoked by an army psychiatrist to explain that any pilot requesting to be evaluated for insanity, to avoid flying dangerous missions, had to be sane as only a sane man would try to get out of such missions. The term “catch-22 has entered the language and describes a paradoxical situation from which one can’t escape due to contradictory rules; one loses, no matter what choice one makes.

10. “Rent” showstopper : LA VIE BOHEME
The musical “Rent” by Jonathan Larson is based on the Puccini opera “La bohème”. “Rent” tells the story of struggling artists and musicians living in the Lower East Side of New York, and is set against the backdrop of the AIDS epidemic. We saw “Rent” on Broadway quite a few years ago and we were very disappointed …

13. Gen ___ : X-ER
The term Generation X originated in the UK where it was the name of a book by Jane Deverson. Her book detailed the results of a study of British youths in 1964, contrasting their lifestyle to those of previous generations. It was Canadian author Douglas Coupland who was responsible for popularizing the term, with his more successful publication “Generation X: Tales for an Accelerated Culture”. By the latest accepted definition, Gen-Xers were born between 1961 and 1981.

18. Fine and dandy : COPACETIC
Something described as “copacetic” is very fine, very acceptable.

24. 1937 Shirley Temple title role : HEIDI
“Heidi” is a Swiss children’s book written by Johanna Spyri and published in two parts. The first is “Heidi’s years of learning and travel”, and the second “Heidi makes use of what she has learned”. The books tell the story of a young girl in the care of her grandfather in the Swiss Alps. The most famous film adaptation of the story is the 1937 movie of the same name starring Shirley Temple in the title role.

26. Postprandial handouts : MINTS
Something described as “preprandial” takes place before a meal, with “postprandial” coming after the meal. The term derives from “prandium”, the Latin for “luncheon”.

29. Apple on an iPod, maybe : FIONA
Fiona Apple is a singer-songwriter and pianist from New York City.

30. Four-bagger : TATER
Apparently, a baseball has long been referred to as a potato, or a “tater”. In the seventies, a long ball started to be called a “long tater”, and from this a home run became a “tater”.

46. “___ Please, We’re British” (1971 stage farce) : NO SEX
A “farce” is a comedy play that features an exaggerated and improbable storyline, with lots of physical humor. I love a good farce …

50. Bunker Hill general : GAGE
Thomas Gage was a British general who fought in the early days of the American War of Independence. It was General Gage who was in charge of the victorious forces in the Battle of Bunker Hill. However, the “victory” resulted in such huge losses for the British that Gage was recalled and dismissed from office.

51. Michelle of “Crouching Tiger, Hidden Dragon” : YEOH
Michelle Yeoh is an actress from Malaysia who appeared in several Hong Kong action films in which she did her own stunts and martial arts scenes. Her most famous performance was in the 2000 movie “Crouching Tiger, Hidden Dragon”, although I best know her for playing opposite Pierce Brosnan in the Bond film “Tomorrow Never Dies”.

54. Henry VIII’s sixth : PARR
Henry VIII was the English King with the most wives. Well, something rubbed off on his last wife, Catherine Parr. She was to become the English Queen with the most husbands! By the time she married Henry she had been widowed twice, and after Henry died she married once again, racking up four husbands in all.

56. Bad cholesterol letters : LDL
LDL (low-density lipoprotein) is one of the compounds responsible for transporting fats around the body. When LDL is combined with cholesterol it can be referred to as “bad cholesterol”. This is because LDL actually transports cholesterol into the inner walls of blood vessels leading to atherosclerosis.