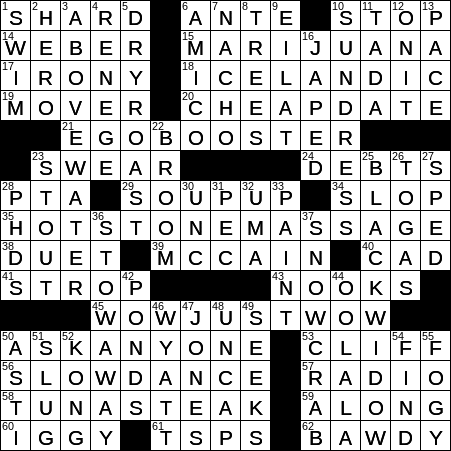 Today’s Wiki-est, Amazonian Googlies
Across
14. Magnetic flux unit : WEBER
In the world of physics, the weber is the unit of magnetic flux. The unit is named for the German physicist Wilhelm Eduard Weber who was the co-inventor of the electromagnetic telegraph.

18. Source of the word “geyser” : ICELANDIC
The Great Geysir in Iceland is the first known geyser to have been discovered and documented. The name “Geysir” comes from the Icelandic and Old Norse word “geysa” meaning “to gush”. It is the Great Geysir that gives us our English word “geyser”.

29. Make more powerful : SOUP UP
“To soup up” an engine is to increase its horsepower. The verb probably derives from the older slang term “soup”, which was a narcotic illegally injected into racehorses to make them run faster.

39. Senator who wrote “Why Courage Matters” and “Hard Call” : MCCAIN
John McCain went into the US Naval Academy in 1958, following a family tradition as his father and grandfather were both four-star admirals. The younger McCain did not achieve the same rank, retiring from the Navy as a captain in 1981, but his career development was interrupted by almost six years spent as a prisoner of war (POW) in North Vietnam. John McCain has been a US Senator from Arizona since 1987.

40. Sleazeball : CAD
Our word “cad”, meaning “a person lacking in finer feelings”, is a shortening of the word “cadet”. “Cad” was first used for a servant, and then students at British universities used “cad” as a term for a boy from the local town. “Cad” took on its current meaning in the 1830s.

41. Cutting edge producer : STROP
A strop is a strip of leather used to sharpen a razor.

43. Certain tablets : NOOKS
The Barnes & Noble electronic-book reader is called the Nook. The Nook accounts for 10-15% of electronic book readers in the world.

53. Fiscal ___ : CLIFF
The term “fiscal cliff” was used to describe a set of automatic cuts to the US federal budget scheduled to come into existence in January 2013.

57. BBC ___ : RADIO
The marvelous British Broadcasting Corporation (BBC) is mainly funded by the UK government through a television licence fee that is levied annually on all households watching TV transmissions. Currently the fee is 145 UK pounds, about 230 US dollars.

58. Serving of ahi : TUNA STEAK
Yellowfin and bigeye tuna are usually marketed as “ahi”, the Hawaiian name. They are both big fish, with yellowfish tuna often weighing over 300 pounds, and bigeye tuna getting up to 400 pounds.

60. Azalea with the 2014 #1 hit “Fancy” : IGGY
Iggy Azalea is the stage name of Australian rapper Amethyst Kelly. I haven’t heard of her outside of crosswords …

Down
1. Exercise at the Y, maybe : SWIM
The YMCA is a worldwide movement that has its roots in London, England. There, in 1844, the Young Men’s Christian Association (YMCA) was founded with the intent of promoting Christian principles through the development of “a healthy spirit, mind and body”. The founder, George Williams, saw the need to create YMCA facilities for young men who were flocking to the cities as the Industrial Revolution flourished. He saw that these men were frequenting taverns and brothels, and wanted to offer a more wholesome alternative.

4. Not follow suit : RENEGE
To renege on something is to back out of it. It’s a word commonly used in card games like bridge and whist. A renege is when a player doesn’t follow suit, even though there may be a card of the suit led in his/her hand.

6. Firenze friend : AMICO
Florence is the capital city of the Tuscany region in Italy. Something from or related to Florence is described as “Florentine”. The city is known as “Firenze” in Italian.

7. Sports bar bite : NACHO
The dish known as “nachos” were supposedly created by the maître d’ at a restaurant called the Victory Club in the city of Piedras Negras, Coahuila, Mexico. The maître d’’s name was Ignacio “Nacho” Anaya.

8. Joyce Kilmer poem that starts “I think that I shall never see” : TREES
The American journalist and poet Joyce Kilmer is primarily known for his 1913 poem titled “Trees”. The original text of the poem is:

9. Israeli seaport : EILAT
Eilat (sometimes “Elat”) the most southerly city in Israel, sitting right at the northern tip of the Red Sea, on the Gulf of Aqaba.

22. One stuck in the closet : BROOM
In old French a “clos” was an enclosure, with the diminutive form “closet” describing a small enclosure or private room. Over time this evolved into our modern usage, to describe a cabinet or cupboard.

26. Caesar dressing? : TOGAS
In Ancient Rome the classical attire known as a toga (plural “togae”) was usually worn over a tunic. The tunic was made from linen, and the toga itself was a piece of cloth about twenty feet long made from wool. The toga could only be worn by men, and only if those men were Roman citizens. The female equivalent of the toga was called a “stola”.

30. N.C.A.A. hoops giant : UNC
The University of North Carolina (UNC) at Chapel Hill started enrolling students way back in 1795, making it the oldest public university in the country (the first to enrol students).

31. Top part of a trunk, for short : PEC
“Pecs” is the familiar term for the chest muscle, more correctly known as the pectoralis major muscle. “Pectus” is a the Latin word for “breast, chest”.

32. Actress Thurman : UMA
Robert Thurman was the first westerner to be ordained a Tibetan Buddhist monk. Robert raised his children in the Tibetan Buddhist tradition and called his daughter “Uma” as it is a phonetic spelling of the Buddhist name “Dbuma”. Uma’s big break in movies came with her starring role in Quentin Tarantino’s 1994 hit “Pulp Fiction”. My favorite Uma Thurman film is the wonderful 1996 romantic comedy “The Truth About Cats and Dogs”.

46. One of the Earp brothers : WYATT
Wyatt Earp is famous as one of the participants in the gunfight at the O.K. Corral. Earp was a city policeman in Wichita, Kansas and also in Dodge City, Kansas. Earp was also deputy sheriff in Tombstone, Arizona where the O.K. Corral gunfight took place. Years later, Earp joined the Alaska Gold Rush and with a partner built and operated the Dexter Saloon in Nome.

47. Ache (for) : JONES
Back in the late 60s, “Jones” was a slang term for an intense desire or an addiction. This usage probably came from an earlier meaning for “Jones” as a synonym for “heroin”. The etymology of the heroin meaning is very unclear.