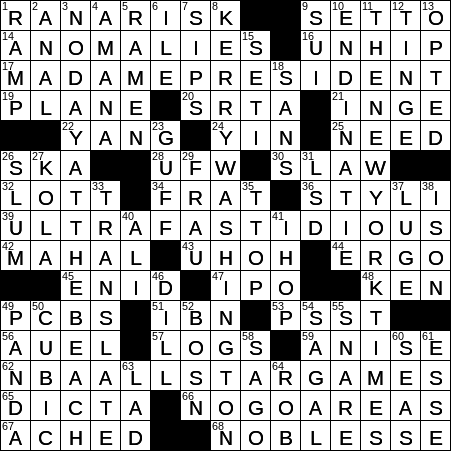 Today’s Wiki-est, Amazonian Googlies
Across
17. Title for the leader of Chile or South Korea : MADAME PRESIDENT
Michelle Bachelet became President of Chile in 2014, having previously served in that office from 2006 to 2010. In between terms, Madame Bachelet was the first Executive Director of UN Women, more completely known as the United Nations Entity for Gender Equality and the Empowerment of Women.

In 2013, Park Geun-hye became the woman to serve as President of South Korea. She is the daughter of Park Chung-hee, who was South Korean president from 1963 to 1979. Even though Park Geun-hye never married, she served as First Lady during her father’s presidency after her mother was assassinated by a North Korean sympathiser in 1974.

19. Blip on a radar screen : PLANE
Scientists have been using radio waves to detect the presence of objects since the late 1800s, but it was the demands of WWII that accelerated the practical application of the technology. The British called their system RDF standing for Range and Direction Finding. The system used by the US Navy was called Radio Detection And Ranging, which was shortened to the acronym RADAR.

21. His gravestone says simply “PLAYWRIGHT” : INGE
During his career, dramatist William Inge was known as the “Playwright of the Midwest”, as many of his works were set in the American heartland and explored small town life. When Inge was 60 years old, he committed suicide by poisoning himself with carbon monoxide. He was buried in his hometown of Independence, Missouri. Inge’s grave is marked with a headstone that reads simply “Playwright”.

22. Counterpart to 24-Across : YANG
24. Counterpart to 22-Across : YIN
The yin and the yang can be explained using many different metaphors. In one, as the sun shines on a mountain, the side in the shade is the yin and the side in the light is the yang. The yin is also regarded as the feminine side, and the yang the masculine. The yin can also be associated with the moon, while the yang is associated with the sun.

26. Precursor of rocksteady : SKA
Ska originated in Jamaica in the late fifties and was the precursor to reggae music. No one has a really definitive etymology of the term “ska”, but it is likely to be imitative of some sound.

28. Org. featured in 2014’s “Cesar Chavez” : UFW
The UFW is the United Farm Workers of America, a labor union formed by the merger of the Agricultural Workers Organizing Committee (AWOC), and the National Farm Workers Association (NFWA) that was led by Mexican American labor leader Cesar Chavez.

“César Chávez” is a 2014 biographical film about the labor leader who founded the United Farm Workers. Michael Peña played the title role, with John Malkovich co-starring.

César Chávez was a Mexican American farm worker, and co-founder of the union today known as the United Farm Workers. Chávez was born in Yuma, Arizona, but moved to California as a child with his family. He never attended high school, dropping out to become a full-time migrant farm worker. In 1944, at 17 years of age, he joined the US Navy and served for two years. 5-6 years after returning from the military, back working as a farm laborer, Chávez became politically active and rose to national attention as an articulate union leader during some high profile strikes. He is remembered annually here in California on his birthday, March 31, which is a state holiday.

30. Dish made with mayo : SLAW
The term “coleslaw” is an Anglicized version of the Dutch name “koolsla”, which in itself is a shortened form of “Koolsalade” meaning “cabbage salad”.

32. Former minority whip in both the House and Senate : LOTT
Trent Lott was raised Democrat in Mississippi, but served in Congress as a Republican. Lott held several important positions, including Minority Whip in both House and Senate.

45. Lady of Camelot : ENID
Enid is a Welsh name, from “einit” an old Welsh word meaning “purity”. Enid was the wife of Geraint, one of King Arthur’s knights. Enid is described as “the personification of spotless purity”.

Camelot is featured in Arthurian legend, as King Arthur’s castle and his court.

47. Event requiring an S.E.C. filing : IPO
An Initial Public Offering (IPO) is the very first offer of stock for sale by a company on the open market. In other words, an IPO marks the first time that a company is traded on a public exchange. Companies have an IPO to raise capital to expand (usually).

48. Cognizance : KEN
“Ken” is a noun meaning “understanding, perception”. One might say, for example, “half the clues in Saturday’s crossword are beyond my ken, beyond my understanding”.

49. Subj. of the Toxic Substances Control Act of 1976 : PCBS
Polychlorinated biphenyls (PCBs) were banned with good reason. Apart from their link to cancer and other disorders in humans and animals, they are extremely persistent in the environment once contamination has occurred. Among other things, PCBs were used as coolants and insulating fluids in electrical gear such as transformers and large capacitors, as well as a transfer agent in carbonless copy paper.

56. Author whose “Earth’s Children” series has sold more than 45 million copies : AUEL
As Jean Auel prepared her first book in the “Earth’s Children” series, she did a lot of research about the Ice Age, the setting for her stories. She went as far as taking a survival course in cold conditions, learning to build an ice cave and how to make fire, tan leather and knap stone.

57. “Paul Bunyan’s toothpicks” : LOGS
Paul Bunyan is a character of American myth, a skilled lumberjack. Bunyan had a sidekick called Babe the Blue Ox. Both Bunyan and Babe are gigantic in size.

59. Italian sausage ingredient : ANISE
Anis is a Spanish liqueur, equivalent to what’s called anisette in other countries (in France, for example). It has a licorice taste as it is produced by distilling the seeds of the anis plant. Like all anis-type drinks, it is usually mixed with water and turns a milky white color when the water is added.

4. Name on a range : AMANA
The Amana Corporation takes its name from the location of its original headquarters, in Middle Amana, Iowa. Today, the Amana name is very much associated with household appliances. The company was founded in 1934 to manufacture commercial walk-in coolers.

5. Common microwaveable dish : RAMEN
Ramen is a noodle dish composed of Chinese-style wheat noodles in a meat or fish broth flavored with soy or miso sauce. Ramen is usually topped with sliced pork and dried seaweed.

6. Haiti’s ___-à-Vache : ILE
Île-à-Vache is an island off the coast of southwest Haiti. The name translates from French as “Cow Island”.

11. It sold for a penny at its 1851 launch : THE NEW YORK TIMES
“The New York Times” has been published since 1851. These days a viable alternative to buying the paper is to read the news online. NYTimes.com is the most popular online newspaper website in the country.

15. Program whose prospects are looking up? : SETI
SETI is the name given to a number of projects that are searching for extraterrestrial life. The acronym stands for “search for extraterrestrial intelligence”. One of the main SETI activities is the monitoring of electromagnetic radiation (such as radio waves) reaching the Earth in the hope of finding a transmission from a civilization in another world.

26. Subject of “How the Other Half Lives” : SLUM
Jacob Riis is famous for his photographs and newspaper articles that highlighted the plight of the impoverished in New York City. He wrote “How the Other Half Lives”, originally an extensive article that appeared in “Scribner’s Magazine” at Christmas 1889. The article had such an impact that Riis was commissioned to expand it into a book, which was published the following year.

27. Rain forest nut : KOLA
The nut of the kola tree has a bitter taste, and is loaded with caffeine. Despite the taste, the nut is habitually chewed in some cultures, especially in West Africa where the tree is commonly found in the rainforest. Here in the US we best know the kola nut as a flavoring used in cola drinks.

31. Something taken in preparation for a trip : LSD
LSD (colloquially known as “acid”) is short for lysergic acid diethylamide. A Swiss chemist called Albert Hofmann first synthesized LSD in 1938 in a research project looking for medically efficacious ergot alkaloids. It wasn’t until some five years later when Hofmann ingested some of the drug accidentally that its psychedelic properties were discovered. Trippy, man …

35. Old Trans Am feature : T-TOP
A T-top is a car roof that has removable panels on either side of a rigid bar that runs down the center of the vehicle above the driver.

37. Olympic event with singles, doubles and team relay : LUGE
A luge is a small sled used by one or two people, on which one lies face up and feet first. The luge can be compared to the skeleton, a sled for only one person and on which the rider lies face down and goes down the hill head-first. Yikes!

40. Loser of the Drama in Bahama : ALI
The Drama in Bahama was a 1981 boxing match fought in Nassau, Bahamas between Muhammad Ali and Trevor Berbick. 27-year-old Berbick defeated 39-year-old Ali on points. It was to be Ali’s last fight. Apparently, it was a very sad and pathetic affair …

52. J. M. Barrie’s Mr. Smee, e.g. : BO’S’N
A boatswain works on the deck of a boat. A boatswain is unlicensed, and so is not involved in the navigation or handling of the vessel. He or she has charge of the other unlicensed workers on the deck. Boatswain is pronounced “bosun” and this phonetic spelling is often used interchangeably with “boatswain”. The contraction “bo’s’n” is also very popular.

54. Katey of “Sons of Anarchy” : SAGAL
Katey Sagal played Peggy Bundy on “Married … with Children”. Later she took over as star of the show “8 Simple Rules” in the middle of its run, when John Ritter passed away unexpectedly in 2003. More recently, Sagal appeared on the FX drama “Sons of Anarchy”. In 2004, she married Kurt Sutter who created the “Sons of Anarchy” series.

“Sons of Anarchy” is a popular FX crime series about an outlaw motorcycle club in California’s Central Valley. It is the most successful FX show ever.

58. ___ pearls (tapioca lookalike) : SAGO
When I was growing up in Ireland I was very familiar with pearl sago, which is very similar to pearl tapioca. Pearls of sago are simply little balls of sago starch used to make breads, pancakes, biscuits, or the steamed puddings that we ate as kids. Sago comes from pith of the sago palm tree. To get at the starch the tree has to be cut down and the trunk split to reveal the pith. The pith is crushed and manipulated to make the starch available, which is then washed out of a fibrous suspension. One sago palm tree yields about 150-300 kg of starch. Personally I love the stuff, but then, I am a bit weird …