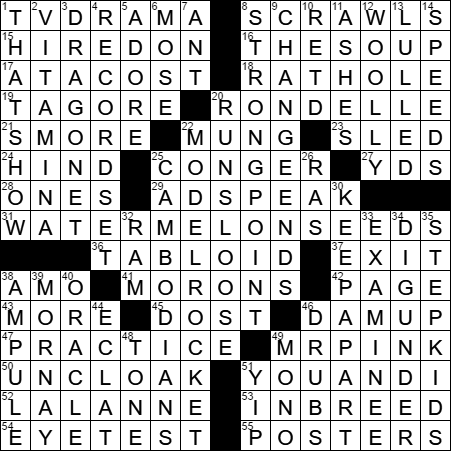 Today’s Wiki-est, Amazonian Googlies
Across
16. Long-running Joel McHale show on E! : THE SOUP
“The Soup” is a show on E! that aired from 2004 until 2015. “The Soup” aired clips from recent shows, with commentary from host Joel McHale. It is a successor to the similar show “Talk Soup” that also aired on E!, from 1991 to 2002, presenting clips from the previous day’s talk shows.

18. Seedy place : RATHOLE
We use the word “seedy” to mean “shabby”. The usage probably arose from the appearance of a flowering plant that has gone to seed.

19. Bengali who won the 1913 Literature Nobel : TAGORE
Rabindranath Tagore was a polymath from Bengal in India. Tagore was the first non-European to win the Nobel Prize in Literature, which he did in 1913.

21. Melted munchie : S’MORE
S’mores are treats peculiar to North America, usually eaten around a campfire. A s’more consists of a roasted marshmallow and a layer of chocolate sandwiched between two graham crackers. The earliest written reference to the recipe is in a 1927 publication called “Tramping and Trailing with the Girl Scouts”. Girl Scouts always did corner the market on cookies and the like!

22. Kind of bean : MUNG
Mung beans are native to India and are used in both savory and sweet dishes in many Asian cuisines.

25. Source of anago sushi : CONGER
Conger eels can grow to be very, very large, perhaps up to 10 feet in length.

“Unagi” is the Japanese word for freshwater eel, and “anago” is the word for salt-water eel.

28. Roughly half of all binary code : ONES
We use a base-ten numbering system, with ten digits (0 – 9). The binary system, or base two, uses just two digits (0 & 1). The binary system is used at a fundamental level in computing, because the number 0 and 1 can be represented by microcircuits being switched “on” or “off”.

36. Potential libel defendant : TABLOID
Tabloid is the trademarked name (owned by Burroughs, Wellcome and Co,) for a “small tablet of medicine”, a name that goes back to 1884. The word “tabloid” had entered into general use to mean a compressed form of anything, and by the early 1900s was used in “tabloid journalism”, applied to newspapers that had short, condensed articles and stories printed on smaller sheets of paper.

41. No-brainers? : MORONS
The unsavory term “moron” was formerly used by the medical community to describe someone with a degree of mental retardation. The term comes from the Greek “moros” meaning “foolish, dull”. Back in the early 1900s, IQ tests were used to classify those suffering from mental retardation into categories:

43. “Utopia” writer, 1516 : MORE
The word “Utopia” was coined by Sir Thomas More for his book “Utopia” published in 1516 describing an idyllic fictional island in the Atlantic Ocean. More’s use of the name Utopia comes from the Greek “ou” meaning “not” and “topos” meaning “place”. By calling his perfect island “Not Place”, More was apparently making the point that he didn’t think that the ideal could actually exist.

45. “___ thou love me?”: Juliet : DOST
William Shakespeare’s “Romeo and Juliet” doesn’t end well for the title characters. Juliet takes a potion as a ruse to fool her parents, to trick them into thinking she is dead. The potion puts her in a death-like coma for 24 hours, after which Juliet plans to awaken and run off with Romeo. Juliet’s sends a message to Romeo apprising him of the plan, but the message fails to arrive. Romeo hears of Juliet’s “death”, and grief-stricken he takes his own life by drinking poison. Juliet awakens from the coma, only to find her lover dead beside her. She picks up a dagger and commits suicide. And nobody lives happily ever after …

The talented actor Steve Buscemi has played many notable roles, particularly in the films by the Coen brothers like “The Big Lebowski”, “Paris, je t’aime”, and my personal favorite “Fargo”. Buscemi was a New York City firefighter for four years in the city’s Little Italy district. After the World Trade Center tragedy Buscemi volunteered at his old firehouse and worked 12-hour shifts for a week digging through rubble.

51. Triple-platinum Lady Gaga hit of 2011 : YOU AND I
Lady Gaga is the stage name of Stefani Germanotta. Germanotta is a big fan of the band Queen, and she took her stage name from the marvelous Queen song titled “Radio Ga Ga”.

52. Longtime fitness guru Jack : LALANNE
Jack LaLanne was a pioneer in the field of fitness and nutrition and was sometimes called “the godfather of fitness”. LaLanne was also a bodybuilder and actually beat 21-year-old Arnold Schwarzenegger in competition, when LaLanne was 54-years-old …

Down
2. Something sweet potatoes provide : VITAMIN A
Vitamin A is actually a group of chemicals, including retinol, retinal and beta-carotene.

6. Jazz pianist Allison : MOSE
Mose Allison is a pianist and singer of the jazz blues genre of music. Allison was born, raised and educated in Mississippi, but launched and maintained his career in New York.

7. Raid target : ANT
Raid insecticide has been killing bugs since 1956.

11. Lent symbols : ASHES
In the Christian tradition, the first day in the season of Lent is called Ash Wednesday. On Ash Wednesday, Palm Crosses from the prior year’s Palm Sunday are burned. The resulting ashes are mixed with sacred oil and then used to anoint worshipers on the forehead with the shape of a cross.

25. People ruled by an elective monarchy : CAMBODIANS
The Kingdom of Cambodia is located in the Indochina Peninsula of Southeast Asia, and is bordered by Thailand, Laos, Vietnam and the Gulf of Thailand. “Cambodia” is the English version of the country’s name, which in Khmer is “Kampuchea”.

26. ___ al Khaymah (one of U.A.E.’s seven emirates) : RAS
The United Arab Emirates (UAE) is a federation of seven emirates (states) in the Middle East. Included in the seven are Abu Dhabi and Dubai, with the city of Abu Dhabi being the UAE capital and cultural center.

35. “The Brady Bunch” bunch : STEPKIDS
The famous sitcom “The Brady Bunch” originally aired from 1969 to 1974 on ABC. If you ever see a movie called “Yours, Mine and Ours” starring Lucille Ball and Henry Fonda (and remade with Dennis Quaid and Rene Russo), you might notice a similarity in storyline. It was because of the success of the 1968 movie that ABC decided to go ahead with the development of “The Brady Bunch”.

38. Shot glass? : AMPULE
An ampule is a sealed vial that is commonly used to hold pharmaceuticals. Ampoules are usually made from glass, and are opened by snapping off the neck of the container.

39. Béchamel sauce with Gruyère added : MORNAY
Béchamel sauce is a roux made from butter and flour cooked in milk. It is sometimes known simply as white sauce. Béchamel is also considered the “mother sauce” in French cuisine as it is the base of other sauces. For example, Mornay sauce is Béchamel with cheese.

Béchamel sauce is a roux made from butter and flour cooked in milk. It is sometimes known simply as white sauce. Béchamel is also considered the “mother sauce” in French cuisine as it is the base of other sauces. For example, Mornay sauce is Béchamel with cheese.

40. Font of knowledge : ORACLE
In Ancient Greece and Rome, an oracle was someone believed inspired by the gods to give wise counsel. The word “oracle” derives from the Latin “orare” meaning “to speak”, which is the same root for our word “orator”.

44. Brilliance : ECLAT
“Éclat” can mean a brilliant show of success, or the applause or accolade that one receives. The word derives from the French “éclater” meaning “to splinter, burst out”.

46. Easily outscores : DRUBS
A drubbing is a beating, given either literally or figuratively. The term “drub” dates back in English to the 17th century when it was imported from the Arabic word for a beating: “darb”.