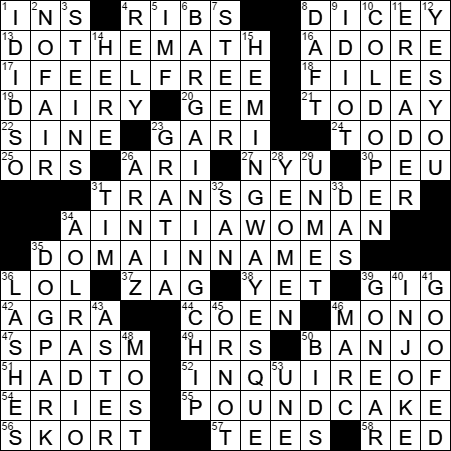 Today’s Wiki-est, Amazonian Googlies
Across
4. Connections to the sternum : RIBS
“Sternum” (plural “sterna”) is the Latin name for the breastbone. “Sternon” is a Greek for “chest, breastbone”.

17. Cream song with the lyric “Dance floor is like the sea, / Ceiling is the sky” : I FEEL FREE
Cream were a “supergroup” from Britain, meaning the band was comprised of musicians from other successful groups. The band’s members were Eric Clapton (from the Yardbirds), and Jack Bruce and Ginger Baker (both from the Graham Bond Organisation).

19. Excluded category in the Paleo diet : DAIRY
The paleolithic or caveman diet is a fad diet that became popular in the 2000s. The idea is to eat wild plants and animals that would have been available to humans during the Paleolithic era (roughly the Stone Age). This period precedes the introduction of agriculture and domestication of animals. As a result, someone on the diet avoids consuming grains, legumes, dairy and processed foods. The diet consists mainly of lean meat (about 45-65% of the total calorie intake), non-starchy vegetables, fruits, berries and nuts.

22. Kind of wave : SINE
A sine wave is a mathematical function that describes a simple, smooth, repetitive oscillation. The sine wave is found right throughout the natural world. Ocean waves, light waves and sound waves all have a sine wave pattern.

23. Wasabi go-with in sushi meals : GARI
Gari is the Japanese name for thinly-sliced ginger that is often served with sushi.

25. People who are in them are out, in brief : ORS
Surgery (surg.) is usually performed in an operating room (OR).

27. Where Spike Lee earned his M.F.A. : NYU
New York University (NYU) is comprised of fifteen schools, one of which it the Tisch School of the Arts. The Tisch is famous for its acting program, with notable alumni such as Debra Messing, Christopher Guest and Josh Radnor.

Film director Spike Lee was born in Atlanta, Georgia but has very much made New York City his home and place of work. Most of Lee’s films are set in New York City, including his first feature film, “She’s Gotta Have It”. That film was shot over two weeks, with a budget of $175,000. “She’s Gotta Have It” grossed over $7 million at the US box office.

34. 1851 Sojourner Truth speech : AIN’T I A WOMAN?
Sojourner Truth (real name Isabella Baumfree) was an African-American abolitionist and woman’s rights activist. Truth was born a slave in New York State, and freed in 1827. She became famous for her speeches against slavery, including her most famous address “Ain’t I a Woman?” that was delivered at the Women’s Convention in Akron, Ohio in 1851.

39. Two or three sets, say : GIG
Musicians use “gig” to describe a job, a performance. The term originated in the early 1900s in the world of jazz.

42. Where the Taj Mahotsav festival is held : AGRA
Agra is a medieval city on the banks of the river Yamuna in India. Agra was also the capital of the Mughal Empire from 1556 to 1658. The city is home to three UNESCO World Heritage Sites:

44. Either director of “Inside Llewyn Davis” : COEN
I think it’s great to see two brothers working together and being so successful. Joel and Ethan Coen are two movie producers and directors who both live in New York City. The Coen brothers do love the movie-making business and they even married industry “insiders”. Ethan’s wife is film editor Tricia Cooke, and Joel is married to one of my favorite actresses, the lovely Frances McDormand.

46. Part of MSG : MONO-
Monosodium glutamate (MSG) is the sodium salt of a naturally-occurring,non-essential amino acid called glutamic acid. It is used widely as a flavor enhancer, particularly in many Asian cuisines. Whether or not it is harmful seems to be still under debate. I say that something produced in a test tube shouldn’t be in our food …

50. Either half of a 1973 “duel” : BANJO
“Dueling Banjos” is a 1955 instrumental that was made famous by the 1972 movie “Deliverance”. “Dueling Banjos” was released as a single in 1973 and spent weeks at the number-two spot in the charts, held back by Roberta Flack’s “Killing Me Softly with His Song”. A kind blog reader pointed out the interesting fact that in “Deliverance”, “Dueling Banjos” was played by one banjo and one guitar … dueling guitar and banjo.

54. Tribe whose name means “long tail” : ERIES
The Erie people lived on lands south of Lake Erie. The Erie were sometimes referred to as the Cat Nation, a reference to the mountain lions that were ever-present in the area that they lived. The name “Erie” is a shortened form of “Erielhonan” meaning “long tail”, possibly a further reference to the mountain lion or cat, which was possibly used as a totem. The Erie people gave their name to the Great Lake.

55. Dessert so-called for its portions of flour, butter, eggs and sugar : POUND CAKE
“Pound cake” is so called because the traditional recipe calls for a pound of each of four ingredients:

56. Purchase at a golf pro shop : SKORT
The garment called a “skort” is a hybrid between shorts and a skirt.

Done
3. Round containers? : STEINS
A stein is a type of beer glass. The term is German in origin, and is short for “Steinkrug” meaning “stone jug”. “Stein” is the German for “stone”.

A round of drinks might be served in steins.

5. Subj. of many antiglobalization protests : IMF
The International Monetary Fund (IMF) was established at the end of 1945 with 29 major economies supporting and funding an effort to stabilize economies across the globe after WWII. Headquartered in Washington, D.C., today the IMF has 187 member countries.

10. Typical “S.N.L.” start : COLD OPEN
A “cold open” of a TV show or movie is a scene that is shown before the title sequence or opening credits. Cold opens became quite the rage on television starting in the mid-sixties.

11. Something you can control the volume with? : E-READER
One might control say the turning of pages while using an e-reader, while reading a book/volume.

15. Terse and unadorned, as writing : HEMINGWAYESQUE
Ernest Hemingway’s writing style has been described variously as lean, terse, economical, spare and tight. He didn’t waste words, and avoided complicated syntax. His writing is “Hemingwayesque”.

23. Part of MGM’s motto : GRATIA
It seems that the phrase “art for art’s sake” has its origins in France in the nineteenth century, where the slogan is expressed as “l’art pour l’art”. The Latin version “Ars gratia artis” came much later, in 1924, when MGM’s publicist chose it for the studio’s logo, sitting under Leo the lion. Who’d a thunk it?

26. “Babalú” bandleader : ARNAZ
“Babalú” is a popular song from Cuba that was first published in the USA in 1939. It was used as the signature song of the character Ricky Ricardo, played by Desi Arnaz, on the TV show “I Love Lucy”.

31. Fashion mogul Gunn : TIM
Tim Gunn is a fashion consultant, and these days a television personality as well. He makes regular appearances on the reality TV show “Project Runway”, and is so popular a character that he now has his own show called “Tim Gunn’s Guide in Style”.

32. ___ Marcos, Tex. : SAN
San Marcos is a city in central Texas, located between Austin and San Antonio. It is home to Texas State University.

The “CSI” franchise of TV shows has been tremendously successful, but seems to have finally wound down. “CSI: Miami” (the “worst” of the franchise, I think) was cancelled in 2012 after ten seasons. “CSI: NY” (the “best” of the franchise) was cancelled in 2013 after nine seasons. The original “CSI: Crime Scene Investigation”, set in Las Vegas, hung in there until 2015 when it ended with a two-hour TV movie. The youngest show in the series was “CSI: Cyber”. It lasted for two season before being canceled in 2016.

34. App with over 200 free stations : AOL RADIO
AOL Radio is an online service offering over 200 free Internet radio stations. The service is available online, and as an app for smartphones.

36. Things that might be batted at a ball : LASHES
At least as far back as the 1800s, the term “batting” was used in falconry to describe the fluttering of a hawk’s wings while on a perch or a fist, as if the bird intended to fly away. The usage of “batting” extended to the fluttering of a human’s eyelids, giving us the expressions “batting an eye” and “batting an eyelid”.

43. Floral symbol of patience : ASTER
Apparently, most aster species and cultivars bloom relatively late in the year, usually in the fall. The name “aster” comes into English via Latin from the Greek word “astéri” meaning “star”, a reference to the arrangement of the petals of the flower.

46. Comedian Maron : MARC
Stand-up comedian Marc Maron has been hosting the podcast “WTF with Marc Maron” since 2009. The online show features interviews with comedians and celebrities. The list of interviewees is pretty impressive, and includes Conan O’Brien, Robin Williams and even President Barack Obama.