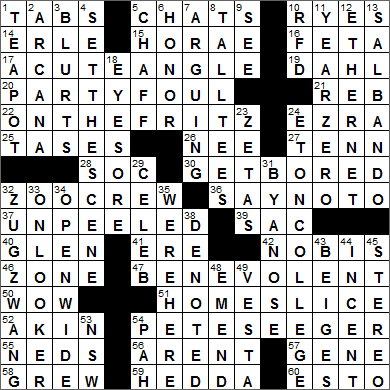 Today’s Wiki-est, Amazonian Googlies
Across
1. They get picked up at clubs : TABS
When we “run a tab” at a bar say, we are “running a tabulation”, a listing of what we owe. Such a use of “tab” is American slang that originated in the 1880s.

10. Bread and drink : RYES
For whiskey to be labelled as “rye” in the US, it has to be distilled from at least 51% rye grain. In Canada however, a drink called rye whiskey sometimes contains no rye at all.

14. First name in court fiction : ERLE
I must have read all of the Perry Mason books when I was in college. I think they kept me sane when I was facing the pressure of exams. Author Erle Stanley Gardner was himself a lawyer, although he didn’t get into the profession the easy way. Gardner went to law school, but got himself suspended after a month. So, he became a self-taught attorney and opened his own law office in Merced, California. Understandably, he gave up the law once his novels became successful.

16. Mediterranean pizza topping : FETA
Feta is a Greek cheese made from sheep’s milk, or a mixture of sheep’s and goat’s milk. The cheese is salted and cured in a brine solution for several months before it is eaten.

17. V feature : ACUTE ANGLE
In geometry, there are several classes of angles:

21. One on the Lee-ward side? : REB
Robert E. Lee is renowned as a southern officer in the Civil War. Lee was a somewhat reluctant participant in the war in that he opposed the secession of his home state of Virginia from the Union. At the beginning of the war, President Lincoln invited Lee to take command of the whole Union Army but he declined, choosing instead to stay loyal to his home state. During the Civil War, Lee’s men referred to him affectionately as “Marse Robert”, with “marse” being slang for “master”.

22. Not working : ON THE FRITZ
The American slang term “on the fritz” means “inoperative”. There doesn’t seem to be a definitive etymology for the term, although there are indications it has a theatrical origin.

26. Name-dropper’s word : NEE
“Née” is the French word for “born” when referring to a female. The male equivalent is “né”.

27. Volunteer’s place: Abbr. : TENN
Tennessee uses the nickname “Volunteer State” as during the War of 1812 volunteer soldiers from Tennessee fought with valor, especially during the Battle of New Orleans.

32. Wacky morning radio team : ZOO CREW
I guess some of those wild and wacky deejays, famous for morning drive-time antics, are called a zoo crew. Nope, NPR for me in the morning …

54. Singer with the 1954 album “Frontier Ballads” : PETE SEEGER
The American folk singer Pete Seeger wrote and co-wrote a lot of classic songs. The list includes “Where Have All the Flowers Gone?”, “If I had a Hammer”, and “Turn, Turn, Turn!”

57. Means of inheritance : GENE
A gene is a section of a chromosome that is responsible for a particular characteristic in an organism. For example, one gene may determine eye color and another balding pattern. We have two copies of each gene, one from each of our parents, with each copy known as an allele.

58. Waxed : GREW
The verbs “to wax” and “to wane” come from Old English. To wax is to increase gradually in size, strength, intensity or number. To wane is to decrease gradually.

60. Latin word on Missouri’s state seal : ESTO
Missouri’s State Motto is “Salus populi suprema lex esto”, which can be translated as “The welfare of the people shall be the supreme law”. It is a quotation from the “De Legibus” (“On the Laws) written by Cicero during the last years of the Roman Republic.

Down
1. Something to get a spot out of? : TEAPOT
I guess the reference here is to the oft quoted English phrase “a spot of tea”. Mind you, I’ve only ever heard that said in jest …

5. Refuse : CHAFF
The “chaff” is the dry husk that surrounds grains in cereal grasses, and it’s what’s left after threshing. We use the term “chaff” in a figurative sense as well, to mean “trivial or worthless matter”.

10. Old letters in the mail : RFD
Rural Free Delivery (RFD) was started in the US in 1891. Prior to RFD, rural Americans had to travel to the nearest post office to pick up their mail.

12. Alternative to Wi-Fi : ETHERNET
Ethernet is the name given to a standardized configuration of local area networks (LANs). An ethernet cable is that one that has a connector on the end that looks like a regular telephone connector, but is about twice as wide. Ethernet dates back to the mid seventies, when it was developed by the Xerox Corporation.

13. Four-time All-Star third baseman of the 1960s-’70s : SAL BANDO
Sal Bando is a former Major League Baseball player and baseball executive. After retiring as a player, Bando worked for while as a color analyst for NBC, working alongside Bob Costas.

24. Historic institution on the Jubilee River : ETON COLLEGE
The world-famous Eton College is located just outside London. It lies between the River Thames, and the Jubilee River. The Jubilee is a 7-mile stretch of man-made waterway that was built in the late 1990s to take overflow from the Thames and reduce flooding around the nearby towns.

32. Chess situation in which any move is a bad move : ZUGZWANG
In the game of chess, a player is said to be “in zugzwang” when any move made will worsen his or her position. The term was coined in chess literature in Germany in the mid-1800s, and was imported into English in the early 20th century. “Zugzwang” comes from the German “Zug” meaning “move” and “Zwang” meaning “being compelled to do something”.

45. Not one-sided, in a way : STEREO
Monophonic sound (“mono”) is sound reproduced using just one audio channel, which is usually played out of just one speaker. Stereophonic sound is reproduced using two audio channels, with the sound from each channel played out of two different speakers. The pair of stereo speakers are usually positioned apart from each other so that sound appears to come from between the two. Quadraphonic sound (4.0 surround sound) uses four audio channels with the sound played back through four speakers often positioned at the corners of the room in which one is listening.

48. Free from faults : EMEND
The verb “to amend” means “to change for the better, put right, alter by adding”. The related verb “to emend” is used more rarely and mainly in reference to the editing of professional writing. Both terms are derived from the Latin “emendare” meaning “to remove fault”.

54. “Poppycock!” : PAH!
It is thought that the relatively gentle term “poppycock”, meaning “nonsense”, comes from a Dutch word for “dung” combined with a Latin word for “excrete”. Not so gentle after all …