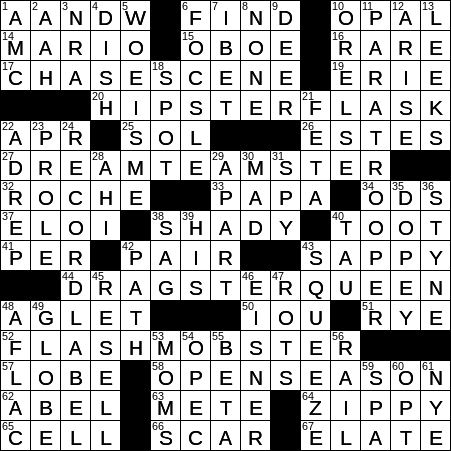 CROSSWORD SETTER: David Steinberg
THEME: Addster
Each of today’s themed answers is a common phrase, but with the suffix -STER inserted:

20A. Something carried surreptitiously into an alt-rock concert? : HIPSTER FLASK (from “hip flask”)
27A. Perfect truck driver for the job? : DREAM TEAMSTER (from “dream team”)
44A. Female street-racing champion? : DRAGSTER QUEEN (from “drag queen”)
52A. Ostentatious member of the Mafia? : FLASH MOBSTER (from “flash mob”)

Today’s Wiki-est, Amazonian Googlies
Across
1. Fast-food chain known for its root beer : A AND W
A&W is a brand of root beer that has been around since 1920, when Roy Allen partnered with Frank Wright to create the A&W moniker from their family names.

10. Iridescent stone : OPAL
An opal is often described as having a milky iridescence, known as “opalescence”.

19. Lakeside Ohio county : ERIE
There are three Erie Counties in the US:

26. ___ Park, Colo. : ESTES
Estes Park is a town in a beautiful part of the US, in northern Colorado. Estes Park is home to the headquarters of Rocky Mountain National Park.

32. Company that makes Valium : ROCHE
The generic name for Valium is diazepam. The drug was developed by Dr. Leo Sternbach of Hoffmann-La Roche, and approved for use in 1963. This was the second of Dr. Sternbach’s major developments, as he was responsible for the diazepam’s sister drug Librium, that went to market in 1960.

34. Some E.R. cases : ODS
Someone taking an overdose (OD) often ends up in an emergency room (ER).

37. Race in an H. G. Wells book : ELOI
In the 1895 novel by H. G. Wells called “The Time Machine”, there are two races that the hero encounter in his travels into the future. The Eloi are the “beautiful people” who live on the planet’s surface. The Morlocks are a race of cannibals living underground who use the Eloi as food.

44. Female street-racing champion? : DRAGSTER QUEEN (from “drag queen”)
Back in the 18th century “drag” was slang for a wagon or buggy, as it was “dragged” along by a horse or horses. In the 1930s, the underworld adopted “drag” as slang for an automobile. This sense of the word was imported into automobile racing in the forties, giving the name to “drag racing”. A drag race is basically a competition between two cars to determine which can accelerate faster from a standstill.

48. Tip on a sweatshirt string : AGLET
An aglet is a plastic or metal sheath that is found on the end of a shoelace or perhaps a drawstring. The name “aglet” comes from the Old French word “aguillette” meaning “needle”.

51. Bagel variety : RYE
The bagel was invented in the Polish city of Kraków in the 16th century. Bagels were brought to this country by Jewish immigrants from Poland who mainly established homes in and around New York City.

52. Ostentatious member of the Mafia? : FLASH MOBSTER (from “flash mob”)
Apparently “Cosa Nostra” is the real name for the Italian Mafia. “Cosa Nostra” translates as “our thing” or “this thing of ours”. The term first became public in the US when the FBI managed to turn some members of the American Mafia. The Italian authorities established that “Cosa Nostra” was also used in Sicily when they penetrated the Sicilian Mafia in the 1980s. The term “mafia” seems to be just a literary invention that has become popular with the public.

Down
1. “The Walking Dead” network : AMC
“The Walking Dead” is a horror television show that is made by AMC that is based on a comic book series of the same name. There are lots of flesh-eating zombies featured, so I won’t be seen “dead” watching it …

6. Ship part spelled with two apostrophes : FO’C’SLE
The forecastle (usually abbreviated to “fo’c’sle”) is the forward part of a ship where the sailors’ sleeping quarters are located. The term is also used to describe the upper deck, forward of the foremost mast. The related phrase “before the mast” is used to describe anything related to a ship’s enlisted men, those sailors who are not officers.

9. Animal in “Home on the Range” : DEER
The words of “Home on the Range” came before the music, a poem called “My Western Home” from the 1870s written by a Dr. Brewster Higley of Kansas. The music was added by Daniel Kelley, a friend of Higley. And now, a version of the song is the state song of Kansas.

13. Vichyssoise vegetables : LEEKS
Vichyssoise is a thick puréed potato soup that can be served hot, but is usually served cold. As well as potatoes, a classic vichyssoise contains leeks, onions, cream and chicken stock. Although the origin is disputed, it seems that the vichyssoise was invented in America, albeit by a French chef. That chef named his soup after the town of Vichy in France.

18. Help at the gym, say : SPOT
People at the gym who are doing weight training will often “spot” for each other. This means that the person who is spotting assists in the lift, allowing the “lifter” to work with more weight than usual.

21. Salty salad topping : FETA
Feta is a Greek cheese made from sheep’s milk, or a mixture of sheep’s and goat’s milk. The cheese is salted and cured in a brine solution for several months before it is eaten.

23. “1984” worker : PROLE
George Orwell introduced us to the “proles”, the working class folk in his famous novel “Nineteen Eighty-Four”. Collectively, the proles make up the section of society known as the proletariat.

24. RCA, for one : RECORD LABEL
RCA Records is the second-oldest recording label in the US, after Columbia Records.

28. Sushi tuna : AHI
Yellowfin and bigeye tuna are usually marketed as “ahi”, the Hawaiian name. They are both big fish, with yellowfish tuna often weighing over 300 pounds, and bigeye tuna getting up to 400 pounds.

30. “What, me worry?” magazine : MAD
“Mad” magazine has been around since 1952, although back then it was more of a comic book than a magazine. The original founder and editor was Harvey Kurtzman and in order to convince him to stay, the publisher changed the format to a magazine in 1955. That’s when the publication really took off in terms of popularity.

31. Nathan Hale, for the Colonies : SPY
Nathan Hale fought for the Continental Army during the American Revolution, and was most famous for operating as a spy against the British. It was Nathan Hale who uttered the words, just before he was hanged by his British captors, “I only regret that I have but one life to lose for my country”.

35. One of a Disney septet : DOPEY
In the original Brothers Grimm fairy tale called “Snow White”, the seven dwarfs were not given any names. The names were added for the 1937 classic Disney film “Snow White and the Seven Dwarfs”. The seven dwarfs are:

36. Composer Jule : STYNE
Jule Styne was an English songwriter who made a name for himself in America with a series of popular musicals. Styne wrote a number of famous songs including “Don’t Rain on My Parade” from “Funny Girl”, “Diamonds Are a Girl’s Best Friend” from “Gentlemen Prefer Blondes”, and “Everything’s Coming Up Roses” from “Gypsy”.

40. T, on a fraternity house : TAU
Tau is the 19th letter of the Greek alphabet, the letter which gave rise to our Roman “T”. Both the letters tau (T) and chi (X) have long been symbolically associated with the cross.

45. Scalp, say : RESELL
“Scalping” of tickets, selling them above retail price for an excessive profit, originated in the mid-1800s with scalpers making money off theater tickets. There was also quite a bit of money made by people scalping railway tickets. Railroads gave discounts on tickets for longer journeys, so someone trying to get from San Francisco to Chicago say, might buy a ticket to New York. Once in Chicago the passenger would scalp the remainder of his/her ticket to someone wanting to get to New York, and make his or her invested money back with a bonus. The exact etymology of the term “scalper” seems unclear.

46. Longtime Disney C.E.O. : EISNER
Michael Eisner took over as CEO of the Walt Disney Company in 1984. Eisner has been attributed with turning Disney around, as the company was floundering really since 1966 when Walt Disney died. Eisner had a good run, but ran foul of Walt Disney’s nephew Roy Disney who led a revolt that resulted in Eisner’s resignation in 2005.

48. Company whose spokesduck is on Twitter : AFLAC
In 1999, Aflac (American Family Life Assurance Company) was huge in the world of insurance but it wasn’t a household name, so a New York advertising agency was given the task of making the Aflac brand more memorable. One of the agency’s art directors, while walking around Central Park one lunchtime, heard a duck quacking and in his mind linked it with “Aflac”, and that duck has been “Aflacking” ever since …

49. Boston daily : GLOBE
“The Boston Globe” is a daily newspaper that was founded in 1872 as a morning daily. “The Boston Evening Globe” followed a few years later, although it ceased publication in 1979. Today you can read the online version of “The Globe” at Boston.com.

54. Crude letters? : OPEC
The OPEC cartel (the Organization of the Petroleum Exporting Countries) was formally established in 1960 and has been headquartered in Vienna since 1965. The US is actually the third largest oil producer in the world (after Russia and Saudi Arabia). One reason America isn’t in OPEC, even though we are a big producer, is that we import a lot more than we export. But we all probably knew that already …

55. Testing stage : BETA
In the world of software development, the first tested issue of a new program is usually called the “alpha” version. Expected to have a lot of bugs that need to be fixed, the alpha release is usually distributed to a small number of testers. After reported bugs have been eliminated, the refined version is called a “beta” and is released to a wider audience, but with the program clearly labeled as “beta”. The users generally check functionality and report further bugs that are encountered. The beta version feeds into a release candidate, the version that is tested just prior to the software being sold into the market, bug-free. Yeah, right …