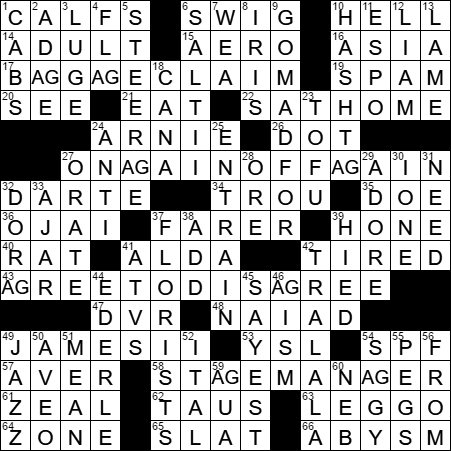 17A. Carousel locale : BAGGAGE CLAIM
27A. Sporadic : ON-AGAIN, OFF-AGAIN
43A. Leave a dispute unsettled : AGREE TO DISAGREE
58A. Role in “Our Town” : STAGE MANAGER

Today’s Wiki-est, Amazonian Googlies
Across
1. ___-foot jelly : CALF’S
Calf’s-foot jelly is made from the stock of boiled calves’ feet. As such, it is an aspic. Calf’s-foot jelly was a dish traditionally served to the sick.

Go to Heaven for the climate, Hell for the company.

24. Noted “army” leader : ARNIE
Arnold Palmer was one of the greats of the world of golf. He was very popular with many fans of the game, and his followers were usually referred to as “Arnie’s Army”. Off the course, Palmer was an avid pilot, until his latter years. He resided in Latrobe, Pennsylvania for much of the year and the local airport is named in his honor: Arnold Palmer Regional Airport.

32. “Vissi ___” (Puccini aria) : D’ARTE
“Vissi d’arte” is an aria from Puccini’s “Tosca” that is sung by the title character Floria Tosca. The title translates from Italian as “I lived for art”.

36. City whose name sounds like a surprised greeting : OJAI
The city of Ojai, California is located just northwest of Los Angeles. One of the city’s claims to fame is that according to the TV shows “The Bionic Woman” and “The Six Million Dollar Man”, Jaime Sommers and Steve Austin grew up in Ojai and were childhood sweethearts!

41. “What Women Want” actor : ALDA
Alan Alda has had a great television career, especially of course on “M*A*S*H”. Alda won his first Emmy in 1972, for playing Hawkeye Pierce on “M*A*S*H”. He won his most recent Emmy in 2006 for his portrayal of Presidential candidate Arnold Vinick in “The West Wing”. When it comes to the big screen, my favorite of Alda’s movies is the 1978 romantic comedy “Same Time, Next Year” in which he starred opposite Ellen Burstyn.

“What Women Want” is a romantic comedy released in 2000 starring Mel Gibson and Helen Hunt. It’s a fun film about an ad man who magically gets the ability to hear women’s thoughts.

48. Swimmer of myth : NAIAD
The Naiads of Greek mythology were water nymphs, associated with fountains, wells, springs and streams. The saltwater equivalents to the freshwater Naiads were the Oceanids.

49. English king deposed in the Glorious Revolution : JAMES II
The Glorious Revolution took place in 1688, resulting in the overthrow of the Catholic King James II of England. English Parliamentarians had been looking to the Protestant daughter of the king to ascend to the throne, along with her husband William of Orange. These plans were jeopardized with the birth of a son to King James II. And so, William of Orange led an invasion of England, and him seizing the throne as William III beside his wife Mary II. This action marked the transition from the rule of the House of Stuarts to the rule of the House of Hanover.

53. Fashion monogram : YSL
Yves Saint-Laurent (YSL) was a French fashion designer, actually born in Algeria. Saint-Laurent started off working as an assistant to Christian Dior at the age of 17. Dior died just four years later, and as a very young man Saint-Laurent was named head of the House of Dior. However, in 1950 Saint-Laurent was conscripted into the French Army and ended up in a military hospital after suffering a mental breakdown from the hazing inflicted on him by his fellow soldiers. His treatment included electroshock therapy and administration of sedatives and psychoactive drugs. He was released from hospital, managed to pull his life back together and started his own fashion house. A remarkable story …

54. Beach lotion letters : SPF
In theory, the sun protection factor (SPF) is a calibrated measure of the effectiveness of a sunscreen in protecting the skin from harmful UV rays. The idea is that if you wear a lotion with say SPF 20, then it takes 20 times as much UV radiation to cause the skin to burn than it would take without protection. I say just stay out of the sun …

58. Role in “Our Town” : STAGE MANAGER
“Our Town” is a play by Thornton Wilder, first performed in 1938. Wilder won a Pulitzer for the work. “Our Town” was actually banned by the Soviet authorities in East Berlin in 1946. Their reasoning was that “the drama was too depressing and could inspire a German suicide wave”.

66. “In the dark backward and ___ of time?”: Shak. : ABYSM
The following lines are from William Shakespeare’s play “The Tempest”.

What seest thou else
In the dark backward and abysm of time?

Down
3. Olympics racer : LUGE
A luge is a small sled used by one or two people, on which one lies face up and feet first. The luge can be compared to the skeleton, a sled for only one person and on which the rider lies face down and goes down the hill head-first. Yikes!

4. Important Stratego piece : FLAG
The wonderful board game called Stratego derives from a traditional Chinese game called “Jungle” or “Animal Chess”. The major difference between Stratego and Jungle is that in the latter the identity of the pieces is not hidden from one’s opponent.

5. Inexpensive way to go : STEERAGE
Originally, “steerage” was that part of a ship holding the steering tackle that ran from the rudder up to the tiller or wheel. The steerage area also served as cheap accommodation (with dire conditions) for passengers who could only afford to pay a small amount for travel. This usage evolved into the name of the cheapest class of ticket even when amenities improved on board.

6. Carter/Brezhnev pact : SALT II
There were two rounds of Strategic Arms Limitation Talks (SALT) between the US and the Soviet Union, and two resulting treaties (SALT I & SALT II). The opening round of SALT I talks were held in Helsinki as far back as 1970, with the resulting treaty signed by President Richard Nixon and General Secretary Leonid Brezhnev in 1972.

8. It’s all about the pupil : IRIS
The pupil of the eye is the “hole” located in the center of the iris through which light enters the retina. The term “pupil” came into English via French from the latin “pupilla”, which is the diminutive form of “pupa” meaning “girl, doll”. The term came about due to the tiny doll-like image that one can see of oneself when looking into the center of another’s eyes.

10. Part of a tweet : HASHTAG
A hashtag is a word preceded by the symbol #. Hashtags are big these days because of Twitter, a microblogging service that I don’t think I will ever understand …

12. Actor Hemsworth of “The Hunger Games” : LIAM
Liam Hemsworth is an Australian actor who is best known these days for playing Gale Hawthorne in “The Hunger Games” series of films. Hemsworth met Miley Cyrus while working on the movie “The Last Song”, and the two actors were engaged for a while. Liam is a younger brother of actor Chris Hemsworth, who plays the superhero “Thor” on the big screen.

18. Biblical miracle town : CANA
According to the Christian Bible, Cana is the place where Jesus performed his first public miracle. Jesus was attending a wedding feast with his mother when the party ran out of wine. Jesus turned water into wine, wine that was judged to be the best served at the feast.

23. Staple of a vegan diet : TOFU
Tofu is another name for bean curd, and is a Japanese word meaning just that … bean that has “curdled”. Tofu is produced by coagulating soy milk, using either salt or something acidic. Once the protein has coagulated, the curds are pressed into the familiar blocks. Personally I love tofu, but my wife, she absolutely hates it …

27. Speak like Cicero : ORATE
Cicero was a very influential senator in Ancient Rome, in part due to his renowned ability to deliver a persuasive speech. His full name was Marcus Tullius Cicero.

29. Verb in “O Come, All Ye Faithful” : ADORE
The lovely Christmas hymn “Adeste Fideles” (entitle “O Come, All Ye Faithful” in English) was written by one John Francis Wade in the 13th century. Well, he wrote the original four verses, with four more verses being added over time. A kind blog reader pointed out to me that the English translation is in fact a little “off”. The term “adeste” best translates from Latin as “be present, attend”, rather that “come”. The verb “come” appears later in the lyrics in “venite adoremus”, meaning “come, let us worship”.

30. Skye of film : IONE
Ione Skye is an American actress born in Hertfordshire in England. She is best known for portraying the character Diane Court in the 1989 high school romance movie “Say Anything …”, starring opposite John Cusack. Skye is the daughter of the Scottish folk singer Donovan.

31. Triage criterion : NEED
“Triage” is the process of prioritizing patients for treatment, especially on a battlefield. The term “triage” is French and means “a sorting”.

32. Rapper’s headwear : DO-RAG
Hip-hoppers might wear do-rags today, but they have been around for centuries. If you recall the famous image of Rosie the Riveter, she was wearing a do-rag. The etymology is pretty evident, a piece of cloth (rag) to hold a hairstyle (do) in place.

33. Not shut tight : AJAR
Our word “ajar” is thought to come from Scottish dialect, in which “a char” means “slightly open”.

37. Glad handlers? : FLORISTS
The gladiolus is a perennial flower in the iris family, and is sometimes called the Sword Lily.

38. Ritalin target, for short : ADD
The “official” name for the condition we sometimes still refer to as “attention deficit disorder” (ADD) is “attention-deficit hyperactivity disorder” (ADHD).

44. Gertrude of 1926 news : EDERLE
Gertrude Ederle was an American swimmer, from New York City. Ederle became the first woman to cross the English Channel, in 1926. Only five men had made the same swim before Ederle, with the fastest crossing being in 16 hours 33 minutes. Ederle blew that record out of the water (pun!), arriving in Dover in 14 hours 39 minutes.

46. Issue of concern to the AARP: Var. : AGISM
AARP is now the official name for the interest group that used to be called the American Association of Retired Persons. The name change reflects the current focus of the group on all Americans aged 50 or over, as opposed to just people who have retired.

50. Chevy that debuted in 2004 : AVEO
The Chevrolet Aveo is a subcompact automobile that has been around since 2002. The Aveo is manufactured by GM Daewoo, the GM subsidiary in South Korea. Although the Aveo name is still used in some markets, here in North America the Aveo has been sold as the Chevrolet Sonic since 2012. By the way, GM Daewoo is the third largest manufacturer of automobiles in South Korea, after Hyundai and Kia.

52. Typographer’s abbr. : ITAL
Italic type leans to the right, and is often used to provide emphasis in text. The style is known as “italic” because the stylized calligraphic form of writing originated in Italy, probably in the Vatican.

60. Home of Creighton U. : NEB
Creighton University is a private Jesuit school in Omaha, Nebraska that was founded in 1878. Originally called Creighton College, it was funded with a bequest of $200,000 from Mary Lucretia Creighton in honor of her husband, banker Edward Creighton.