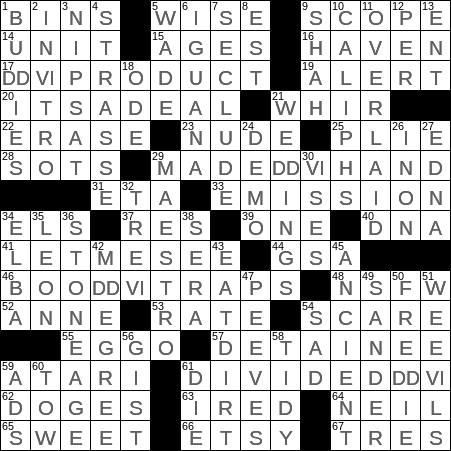 Today’s Wiki-est, Amazonian Googlies
Across
9. Brand of mouthwash : SCOPE
Scope is a brand of mouthwash made by Procter & Gamble. Scope has been marketed as the “better-tasting alternative” to Listerine.

16. Word after New or tax : HAVEN
The city of New Haven, Connecticut was founded in 1638 by Puritan immigrants from England. New Haven is home to Yale University. The city also initiated the first public tree planting program in the country. The large elms included in the program led to New Haven being called “the Elm City”.

21. Drone of a drone, say : WHIR
That would be the whir or drone of an unmanned aerial vehicle, also known as a drone.

28. Barflies : SOTS
Our word “sot” comes from the Old English “sott”, meaning “fool”. The word “sot” started to be associated with alcohol and not just foolery in the late 1500s.

37. Law “thing” : RES
“Res” is the Latin for “thing”. “Res” is used in a lot of phrases in the law, including “res ipsa loquitur”. The literal translation of “res ipsa loquitur” is “the thing speaks for itself”. It refers to situations when there is an injury, and the nature of the injury is such that one can assume that negligence had to have taken place.

40. Part of a modern police database : DNA
I’ve always been fascinated by the fact that the DNA of living things is so very similar across different species. Human DNA is almost exactly the same for every individual (to the degree of 99.9%). However, those small differences are sufficient to distinguish one individual from another, and to determine whether or not individuals are close family relations.

44. Fed. property overseer : GSA
The US Government’s General Services Administration (GSA), as the name suggests, provides general services to other federal agencies. So for example, the GSA manages office space for the other agencies, and transportation.

46. Staples of Indiana Jones films : BOOBY TRAPS
Raiders of the Lost Ark is, in my humble opinion, the best of the Indiana Jones franchise of movies. This first Indiana Jones film was released in 1981, produced by George Lucas and directed by Steven Spielberg. Harrison Ford was Spielberg’s first choice to play the lead, but Lucas resisted as he was concerned that he would be too closely associated with the actor (as Ford played Han Solo in “Star Wars”, and also appeared in Lucas’s “American Graffiti”). Tom Selleck was offered the role but he couldn’t get out of his commitments to “Magnum, P.I.” Eventually Spielberg got his way and Ford was hired, a good thing I say …

48. Warning next to an internet link : NSFW
The abbreviation “NSFW” stands for “not safe/suitable for work”. It’s Internet slang used to describe online content that is best not viewed at work.

52. Sullivan who taught Helen Keller : ANNE
Helen Keller became a noted author despite been deaf and blind, largely through the work of her teacher, Anne Sullivan. Keller was left deaf and blind after an illness (possible meningitis or scarlet fever). when she was about 18 months old. She was to become the first deaf and blind person to earn a Bachelor of Arts degree. The relationship between Sullivan and Keller is immortalized in the play and film called “The Miracle Worker”.

54. Hiccup cure, it’s said : SCARE
Hiccups is a series of forced intakes of breath, caused by spasms in the muscles of the chest and throat. The most common cause of hiccups is some sort of irritation to the stomach or oesophagus, usually taking place while eating. Apparently, we don’t really understand the reason why we hiccup, but a favored suggestion is that it may be something that we inherited from our ancestors of long ago who didn’t stand up quite as straight as we do. Gravity helps us swallow our food, but animals who walk on all fours don’t have that advantage as the food moves horizontally down the throat and into the stomach. Such beasts are in greater need of an involuntary hiccup should some food get stuck. Just a theory …

55. Brand with a Thick & Fluffy variety : EGGO
Eggo is the brand name of a line of frozen waffles made by Kellogg’s. When they were introduced in the 1930s, the name “Eggo” was chosen to promote the “egginess” of the batter. “Eggo” replaced the original name chosen, which was “Froffles”, created by melding “frozen” and “waffles”.

62. Onetime Venetian leaders : DOGES
Doges were the elected chief magistrates of the former republics of Venice and Genoa.

64. Buzz preceder, famously : NEIL
Neil Armstrong was the most private of individuals. You didn’t often see him giving interviews, unlike so many of the more approachable astronauts of the Apollo space program. His famous, “That’s one small step for (a) man, one giant leap for mankind” statement; that was something that he came up with himself while Apollo 11 was making its way to the moon.

Buzz Aldrin is a true American hero, I’d say. He flew 66 combat missions in Korea, shot down two MiGs, earned his Sc. D. degree from MIT, and was one of the two men who landed on the moon for the first time. Now that man, he has lived a life worth living.

66. Popular crafts site : ETSY
Etsy.com is an e-commerce website where you can buy and sell the kind of items that you might find at a craft fair.

67. Número of Disney Caballeros : TRES
“The Three Caballeros” is a 1944 Disney film, the seventh animated feature released by the studio. Star of the movie is Donald Duck.

Down
2. Kind of fertilization : IN VITRO
In vitro fertilization is the process in which egg cells are fertilized by sperm cells outside of the body “in vitro”, meaning “in glass”, usually in a culture dish.

5. Flamingos do it : WADE
The name “flamingo” comes from the Greek word for “purple wing”. The flamingo’s pink or reddish color comes from the bird’s diet, and in particular the pigments ingested from animal and plant sources.

6. Pet that’s a herbivore : IGUANA
An iguana is a lizard, and as such is cold-blooded. There are times when pet iguanas need heat from an IR lamp to maintain body temperature.

The papyrus plant was commonly found in the Nile Delta of Europe. The pith of the plant was used to make a thick, paper-like material on which one could write. This writing material, which became known as papyrus (plural “papyri”), became a competitor for the most popular writing surface of the day known as parchment, which was made from animal skins.

9. Noted exile of 1979 : SHAH
The last Shah of Iran was Mohammed-Reza Shah Pahlavi, as he was overthrown in the revolution led by the Ayatollah Khomeini in 1979. The post-revolution government sought the extradition of the Shah back to Iran while he was in the United States seeking medical care (he had cancer). His prolonged stay in the United States, recovering from surgery, caused some unrest back in Iran and resentment towards the United States. Some say that this resentment precipitated the storming of the US Embassy in Tehran and the resulting hostage crisis.

12. Pay-click connection : PER
“Pay-per-click” is an advertising model commonly used on the Internet. The scheme allows advertisers to place ads for free, only paying every time that a reader clicks on an ad.

13. Specialist in three of the five senses, for short : ENT
Ear, nose and throat specialist (ENT)

18. Shelley’s “___ to Liberty” : ODE
Percy Bysshe Shelley was an English Romantic poet. Shelley had strong views on vegetarianism. He was dedicated to the cause of all sentient beings, believing that the slaughter of animals by humans for the use of food was a barbaric practice. He wrote a famous essay on the subject called “A Vindication of Natural Diet” in 1813.

27. Designer Mode of “The Incredibles” : EDNA
“The Incredibles” is a 2004 animated feature from Pixar, not a great movie if you ask me. But asking me probably isn’t a good idea, as the film won two Oscars …

29. Leader in a pit : MAESTRO
“Maestro” is often used to address a musical conductor. “Maestro” (plural “maestri”) is the Italian word for “master, teacher”. The plural in English is usually “maestros”.

32. Noted fountain name : TREVI
The Trevi Fountain is a huge fountain in Rome, the largest constructed in the Baroque style. The tradition is that if one throws a coin in the fountain then one is guaranteed a return visit to the city. Tourists throw in an amazing 3,000 euros (over $4,000) every day. The money is collected and is used to stock a supermarket for the needy of the city.

34. Actor Idris : ELBA
The English actor Idris Elba is probably best known in North America for playing the drug lord Stringer Bell in the marvelous HBO drama series “The Wire”, and the title character in the 2013 film “Mandela: Long Walk to Freedom”. Off the screen, Elba works as a disk jockey using the name DJ Big Driis.

35. Spanish provincial capital : LEON
León is a province in the autonomous community of Castile and León in the northwest of Spain. The province’s capital is the city of León, which was founded as Roman military encampment around 29 BC.

36. Very primitive : STONE-AGE
Ancient societies can be classified by the “three-age system”, which depends on the prevalence of materials used to make tools. The three ages are:

45. Like the Aramaic language : ANCIENT
The ancient Biblical land of Aram was named after Aram, a grandson of Noah. Aram was located in the center of modern-day Syria. Aramaic became the everyday language of Syria, Mesopotamia and Palestine.

47. Overuse of the word “like,” and others : PEEVES
The phrase “pet peeve”, meaning “thing that provokes one most”, seems to be somewhat ironic. A “peeve” is a source of irritation, and the adjective “pet” means “especially cherished”.

51. Boring things : WEEVILS
A weevil is a small beetle, known for the damage that it can do to crops. The boll weevil damages cotton plants by laying eggs inside cotton bolls. The young weevils then eat their way out. Some weevils have snouts that are as long as their body.