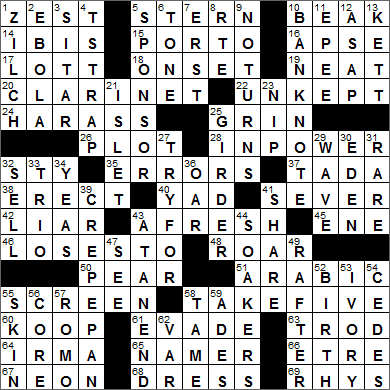 CROSSWORD SETTER: Morton J. Mendelson
THEME: Double-Duty Clues
We have just one set of clues today, labeled neither across nor down. As a result, some pairs of answers in the grid use the same clue, once in the across-direction and once in the down-direction:

Today’s Wiki-est, Amazonian Googlies
Across
1. Zip : ZEST / ZILCH
We use the term “zilch” to mean “nothing”. Our current usage evolved in the sixties, before which the term was used to describe “meaningless speech”. There was a comic character called Mr. Zilch in the 1930s in “Ballyhoo” magazine. Mr. Zilch’s name probably came from the American college slang “Joe Zilch” that was used in the early 1900s for “an insignificant person”.

2. Subject of some 2015 border control measures : EBOLA
The Ebola virus causes a very nasty form of hemorrhagic fever. The name of the virus comes from the site of the first known outbreak, in a mission hospital in the Ebola River Valley in the Democratic Republic of the Congo. The disease is transmitted from human to human by exposure to bodily fluids. In nature, the main carrier of Ebola is the fruit bat.

3. Instrument with 18+ strings : SITAR
The sitar has been around since the Middle Ages. The sitar is a stringed instrument that is played by plucking, and is used most often in Hindustani classical music. In the West we have been exposed to the instrument largely through the performances of Ravi Shankar and some music by George Harrison of the Beatles, a onetime student of Shankar.

4. Women’s shoe feature : T-STRAP
A t-strap is a t-shaped strap that is part of many women’s shoes. The strap is in two parts, with one part going across the ankle, and the other lying along the length of the foot on top.

11. One guarded in a duel? : EPEE
“En garde” is a French term that has been absorbed into the sport of fencing. Originally a warning “on guard!”, it is spoken at the start of an encounter to warn the fencers to take a defensive position.

13. Etta of old comics : KETT
“Etta Kett” was a comic strip that first ran in 1925. The strip ceased to be published in 1974, when creator Paul Robinson passed away. The initial intent was to offer tips to teenagers on manners and social graces, hence the name of the title character Etta Kett (sounds like “etiquette”).

14. Bird with a forcepslike bill : IBIS
The ibis is a wading bird that was revered in ancient Egypt. “Ibis” is an interesting word grammatically speaking. You can have one “ibis” or two “ibises”, and then again one has a flock of “ibis”. And if you want to go with the classical plural, instead of two “ibises” you would have two “ibides”!

15. City north of Lisboa : PORTO
In Portuguese, “Lisboa” (Lisbon) and “Porto” (Oporto) are the two largest cities in Portugal.

16. Something that sticks out in a church? : APSE
The apse of a church or cathedral is a semicircular recess in an outer wall, usually with a half-dome as a roof and often where there resides an altar. Originally, apses were used as burial places for the clergy and also for storage of important relics.

17. Former Mississippi senator Trent : LOTT
Trent Lott was raised Democrat in Mississippi, but served in Congress as a Republican. Lott ran into trouble for remarks he made that were interpreted as being racially motivated, and ended up resigning in 2007.

20. Mozart was the first major composer to write specifically for it : CLARINET
The clarinet is a lovely-sounding instrument, isn’t it? The name comes from the Italian word “clarino” meaning “trumpet” with the “-et” suffix indicating “small”.

21. Key : ISLET
A “key” (also “cay”) is a low island offshore, as in the Florida Keys. Our term in English comes from the Spanish “cayo” meaning “shoal, reef”.

23. Chill : NIP
The air might be described as “crisp” on a frosty morning. One might also say that there is a “nip” in the air.

24. Razz : HARASS
Not so much here in America, but over in the British Isles “blowing a raspberry” is a way of insulting someone (I think it’s called “a Bronx cheer” in the US). The verb “to razz” comes from a shortened form of “raspberry”.

30. Starter home? : EDEN
According to the Book of Genesis, Adam and Eve lived in a garden “in” Eden, with Eden being geographically located by reference to four rivers including the Tigris and the Euphrates. Some scholars hypothesize that Eden was located in Mesopotamia, which encompasses much of modern-day Iraq.

31. Like black rhinos : RARE
There are five types of rhinoceros that survive today, and the smaller Javan Rhino is the most rare. The rhinoceros is probably the rarest large mammal on the planet, thanks to poaching. Hunters mainly prize the horn of the rhino as it is used in powdered form in traditional Chinese medicine.

35. Heading in a baseball box score : ERRORS
In baseball, the line square is a summary set of statistics for the game. It is seen at every baseball stadium, and includes the number of runs scored by each team per innings, as well as the total number of hits and errors. The more comprehensive box score includes the line score, but also shows the individual performance of each player.

40. ___ Vashem, Israel’s Holocaust memorial : YAD
Jerusalem’s Yad Vashem is a memorial to the victims of the Holocaust was opened to the public in 1957. The name “Yad Vashem” can be translated from Hebrew as “a place and a name”, and comes from a verse in the Book of Isaiah in the Hebrew Bible:

Even unto them will I give in my house and within my walls a place and a name better than of sons and of daughters: I will give them an everlasting name, that shall not be cut off

42. Mythomaniac : LIAR
A “mythomaniac” has a propensity for telling lies, for creating “myths”.

44. Super ___ (toy water guns) : SOAKERS
The Super Soaker brand of water gun first went on sale in toy shops in 1989. Since then, over a billion dollars worth of Super Soakers have been sold.

45. Suffix with acetyl : -ENE
Acetylene is one of the simplest hydrocarbons, and has the formula C2H2. About 20% of the acetylene produced in the world is used for oxyacetylene gas welding and cutting.

49. Murder : crows :: ___ : turkeys : RAFTER
There doesn’t seem to be a definitive etymology for “murder” as the collective noun for crows. One suggestion is that it comes from the scavenging behavior of crows, sometime feeding on rotting bodies of dead animals.

50. Word with prickly or alligator : PEAR
“Alligator pear” is another name for the avocado.

53. Something the U.S. government bans the sale of : IVORY
The hard, white material called ivory has mainly been sourced from the tusks of elephants, although it can also be collected from the walrus, hippopotamus, killer whale, wart hog and others. The word “ivory” comes into English via Latin from the Ancient Egyptian word for “elephant”.

57. Longtime Dallas Cowboys QB Tony : ROMO
Tony Romo is a quarterback for the Dallas Cowboys. Romo is also an avid amateur golfer and has even tried (albeit unsuccessfully) to qualify for the US Open golf championship.

59. Sources of vitamin C : ADES
The essential nutrient referred to as vitamin C is also called L-ascorbic acid or ascorbate. A lack of vitamin C causes the disease scurvy.

60. C. Everett ___, 1980s surgeon general : KOOP
C. Everett Koop was Surgeon General from 1982-89, appointed by President Reagan. Koop was a somewhat controversial character and one who brought the position of Surgeon General into the spotlight more than was historically the case. Partly this was due to his pro-life position, his anti-tobacco stance and the fact that AIDS became a prominent issue while he was in office.

62. What “whisky” is to “whiskey”: Abbr. : VAR
Don’t forget that we use the spelling “whiskey” for American and Irish versions of the drink, and “whisky” for Scotch, the Scottish version.

67. Commercial light : NEON
The basic design of neon lighting was first demonstrated at the Paris Motor Show in 1910. Such lighting is made up of glass tubes containing a vacuum into which has been introduced a small amount of neon gas. When a voltage is applied between two electrodes inside the tube, the neon gas “glows” and gives off the familiar light.

69. Novelist Jean who wrote “Wide Sargasso Sea” : RHYS
Wide Sargasso Sea” was written by Jean Rhys and first published in 1966. It’s a clever work, written as a sort of prequel to Charlotte Bronte’s famous “Jane Eyre”, which dates back to 1847.