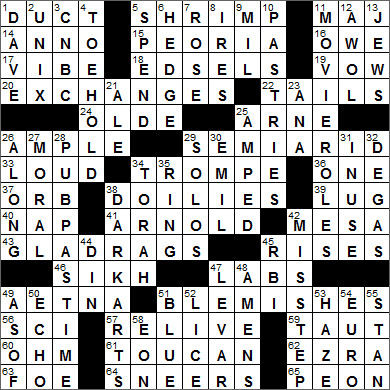 38D. What sorcerers practice … or a hint to interpreting five clues in this puzzle : DARK ARTS

Today’s Wiki-est, Amazonian Googlies
Across
5. Gulf Coast catch : SHRIMP
The terms “prawn” and “shrimp” are often used interchangeable on menus. Over in the UK, the term “prawn” is most common, while “shrimp” is seen more often here in North America. Sometimes there is a differentiation from a food standpoint, with “prawn” being used for larger species and “shrimp” for smaller species. As a result, “jumbo prawns” seems to be an acceptable descriptor for a dish, whereas “jumbo shrimp” seems to be an oxymoron.

14. Part of A.D. : ANNO
The designations Anno Domini (AD, “year of Our Lord”) and Before Christ (BC) are found in the Julian and Gregorian calendars. The dividing point between AD and BC is the year of the conception of Jesus, with AD 1 following 1 BC without a year “0” in between. The AD/BC scheme dates back to AD 525, and gained wide acceptance soon after AD 800. Nowadays a modified version has become popular, with CE (Common/Christian Era) used to replace AD, and BCE (Before the Common/Christian Era) used to replace BC.

15. Where Caterpillar is headquartered : PEORIA
Peoria is the oldest European settlement in the state of Illinois, having been settled by the French in 1680. The city is famous for being cited as “the average American city”.

Back in the early 1900s, Benjamin Holt invented a steam tractor that was able to move over soggy land. The new vehicle crawled over the ground using wheels that drove tracks. Someone apparently noted that the tractor moved along like a caterpillar, and so the enterprise that was to be known as the Caterpillar Tractor Company was born.

18. Cars introduced with much fanfare on “E Day” : EDSELS
The Edsel brand of automobile was named for Edsel, son of Henry Ford. Sadly, the name “Edsel” has become synonymous with “failure”, which was no fault of Edsel himself who had died several years before the Edsel line was introduced. When the Ford Motor Company introduced the Edsel on 4 September 1957, Ford proclaimed the day to be “E Day”.

22. It has a 50% chance : TAILS
The two sides of a coin are known as the “obverse” and the “reverse”. The obverse is commonly referred to as “heads”, as it often depicts someone’s head. The reverse is commonly called “tails”, as it is the opposite of “heads”.

24. Shoppe descriptor : OLDE
The word “olde” wasn’t actually used much earlier than the 1920s. “Olde” was introduced to give a quaint antique feel to brand names, shop names etc. as in “Ye Olde Shoppe”.

25. Composer Thomas : ARNE
Thomas Arne was an English composer from London. Arne wrote some iconic compositions including “Rule, Britannia!” He also wrote a version of “God Save the King” that became the British national anthem.

34. ___-l’oeil (illusion) : TROMPE
“Trompe l’oeil” is a technique in art that creates the optical illusion that a drawn object exists in three dimensions. “Trompe-l’oeil” is French for “deceive the eye”.

38. Dining table decorations : DOILIES
There was a draper in London in the seventeenth century called Doiley, and he gave his name to the lace fabric that he sold, which in turn gave its name to the ornamental mats we call doilies. I can’t stand doilies …

41. Traitor in the Revolutionary War : ARNOLD
Benedict Arnold was a general in the Continental Army during the American War of Independence, who defected to the British Army. While serving with the Continental Army, Arnold was given command of the fort at West Point. He planned on surrendering the fort to the British, but his plot was discovered before he could do so and he made a narrow escape. Arnold was made a brigadier general in the British Army and he led British forces in several raids against American troops. After the war ended, Arnold moved to London and worked in the merchant business. He died there in 1791.

47. “Chocolate” dogs : LABS
The Labrador (Lab) breed of dog has been around at least since 1814. The breed comes in three registered colors: black, yellow and chocolate.

49. Hartford-based insurance giant : AETNA
When the healthcare management and insurance company known as Aetna was founded, the name was chosen to evoke images of Mt. Etna, the European volcano.

51. W # # # # : BLEMISHES (Warts)
A wart is a small eruption on the skin caused by a localized viral infection. The most successful treatment is topical use of salicylic acid, with a cure rate of 75%. I think it’s best to try to avoid getting them …

56. Part of STEM: Abbr. : SCI
The acronym STEM stands for the disciplines of science, technology, engineering and mathematics. An alternative acronym with a similar meaning is MINT, standing for mathematics, information sciences, natural sciences and technology.

60. Resistance unit : OHM
The unit of electrical resistance is the ohm (with the symbol omega) named after German physicist Georg Simon Ohm. Ohm was the guy who established experimentally that the amount of current flowing through a circuit is directly proportional to the voltage applied, (V=IR) a relationship that every schoolkid knows as Ohm’s Law.

61. Bird on a Froot Loops box : TOUCAN
Froot Loops (ugh!) is a breakfast cereal from Kellogg’s that has been around since 1963. The little loops come in different colors, originally red, orange and yellow, but now there are green, purple and blue loops as well. Notice I said “different colors” not “different flavors”. Each loop tastes the same, so I wonder where the color comes from …?

62. ___ Taft Benson (1980s-’90s Mormon leader) : EZRA
Ezra Taft Benson was the thirteenth president of the Church of Jesus Christ of Latter Day Saints, serving from 1985 until 1994. Benson was also the US Secretary of Agriculture in the Eisenhower administration.

65. Common laborer : PEON
A peon is a lowly worker with no real control over his/her working conditions. The word comes into English from Spanish, in which language it has the same meaning.

3. Stock watcher’s network : CNBC
CNBC is a business news channel owned by NBC. Launched in 1989, up until 1991 CNBC was known as the Consumer News and Business Channel.

7. Wine variety : ROSE
Rosé wines get their color from the skins of the grapes, although the intensity of the color is not sufficient to make them red wines. Of the varying type of rosé wines available, we are most familiar with sweet White Zinfandels. Personally I am fond of the really dry Provençal rosé wines.

8. States of pique : IRES
Our term “pique” meaning a “fit of ill feeling” is a French word meaning a “prick, sting, irritation”.

13. Seder celebrants : JEWS
The Passover Seder is a ritual feast that marks the beginning of the Jewish Passover holiday, celebrating the liberation of the Israelites from slavery in Egypt. One of the traditions at the meal is that the youngest child at the table asks “The Four Questions”, all relating to why this night is different from all other nights in the year:

23. Santa ___ winds : ANA
The Santa Ana winds are the very dry air currents that sweep offshore late in the year in Southern California. Because these air currents are so dry, they are noted for their influence over forest fires in the area, especially in the heat of the fall. The winds arise from a buildup of air pressure in the Great Basin that lies between the Rocky Mountains and the Sierra Nevada. Under the right conditions, that air spills over the peaks of the Sierra Nevada and basically “falls” down the side of the Sierra range, heading for the ocean. As the air falls it becomes drier and heats up so that relative humidity can fall to below 10% by the time it hits the coast.

28. D # # # # : PUB PASTIME (Darts)
Darts is a wonderful game often played in English and Irish pubs, even over here in America. The scoring in a traditional game of darts is difficult to describe in a sentence or two, but the game of darts called “Round the Clock” is simply hitting the numbers 1 through 20 in sequence.

30. Pianist Gilels : EMIL
Emil Gilels was a pianist from the old Soviet Union, born in Odessa (now part of Ukraine). Gilels was one of the first musicians allowed to perform concerts outside of the Eastern Bloc. His debut appearance in Philadelphia with Eugene Ormandy was a resounding success.

31. Occupied, as a lav : IN USE
Our word “lavatory” originally referred to a washbasin, and comes from the Latin “lavatorium”, a place for washing. In the 1600s a “lavatory” came to mean a washroom, and in the 1920s a toilet.

32. “At the Milliner’s” painter : DEGAS
Edgar Degas was a French artist, famous for his paintings and sculptures. Some of Degas’ most beautiful works feature female ballet dancers, and others depict women bathing.

34. Holy text : TORAH
The word “Torah” best translates as “teaching”, I am told.

44. Cacophony : DIN
“Cacophony” is such a lovely word, one used to describe a harsh or jarring sound. The term arises from the Greek “kakos” (bad) and “phone” (voice).

47. Actor Burton : LEVAR
The actor LeVar Burton is very much associated with two iconic roles on television: young Kunta Kinte in “Roots”, and Geordi La Forge in “Star Trek: The Next Generation”. Burton also hosted the children’s PBS show “Reading Rainbow” for many years. His portrayal of Kunta Kinte in 1977 was Burton’s first acting job. Indeed, Burton’s audition for the part was the first in his professional career!

48. Church chorus? : AMENS
The word “amen” is translated as “so be it”. “Amen” is said to be of Hebrew origin, but it is likely to be also influenced by Aramaic and Arabic.

52. Big nits : LICE
Lice (singular “louse”) are small wingless insects of which there are thousands of species, three of which are human disease agents. The three kinds of lice affecting humans are head lice, body lice and pubic lice. Most lice feed on dead skin found on the body of the host animal, although some feed on blood. Ick …

53. Hangover feeling : HAZE
The main cause of hangover symptoms seems to be dehydration. Ethanol causes increased urine production, leaving the body short of water and resulting in headaches, dry mouth and a lack of energy. The symptoms can be alleviated by drinking a lot of water.

54. Lead-in to zone : EURO-
The “eurozone” or “euro area” is a monetary and economic union within the European Union that uses the euro as a shared legal tender and sole currency.

55. Musial in Cooperstown : STAN
Stan Musial was a retired baseball player who went by the nickname “Stan the Man”, a moniker he was awarded by the Brooklyn Dodgers fans in 1946. Apparently, off the field Stan was quite the harmonica player.