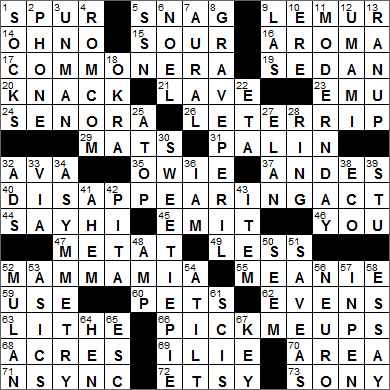 CROSSWORD SETTER: Tom McCoy
THEME: 3-Letter Initialisms
Today’s themed answers are common phrases that have been reinterpreted as if they end with a 3-letter initialism:

Today’s Wiki-est, Amazonian Googlies
Across
9. King Julien in “Madagascar,” for one : LEMUR
Lemurs are the most unusual-looking creatures, native to the island of Madagascar off the east coast of Africa. With their white fur and dark eyes that are very reflective at night, they have a “ghostly” appearance. Indeed, the animals takes their name from Roman mythology in which “lemures” were spirits of the restless dead.

23. Bird with large green eggs : EMU
Emu eggs are very large, with a thick shell that is dark-green in color. One emu egg weighs about the same as a dozen chicken eggs.

32. Gardner who played the Barefoot Contessa : AVA
Ava Gardner is noted for her association with some big movies, but also for her association with some big names when it came to the men in her life. In the world of film, she appeared in the likes of “Mogambo” (1953), “On the Beach” (1959), “The Night of the Iguana” (1964) and “Earthquake” (1974). The men in her life included husbands Mickey Rooney, Artie Shaw and Frank Sinatra. After her marriages had failed (and perhaps before!) she had long-term relationships with Howard Hughes and bullfighter Luis Miguel Dominguin whom she met through her friend Ernest Hemingway.

“The Barefoot Contessa” is an excellent film released in 1954, with Ava Gardner in the title and also starring Humphrey Bogart and Edmond O’Brien. The movie tells the story of Maria Vargas, a nightclub dancer who eventually weds a count, and who likes to go around in bare feet. Hence, the title …

The Andes range is the longest continuous chain of mountains in the world, running right down the length of the west coast of South America for about 4,300 miles. The highest peak in the Andes is Mt. Aconcagua, at an elevation of 22,841 feet. Interestingly, the peak of Mt. Chimborazo in Ecuador is the furthest point on the Earth’s surface from the center of the planet. That’s because of the equatorial “bulge” around the Earth’s “waist”.

47. Rendezvoused near : MET AT
A rendezvous is a meeting, from the French “rendez vous” meaning “present yourselves”.

52. Example of bad parenting? : MAMMA MIA (missing in action)
The hit musical “Mamma Mia!” was written to showcase the songs of ABBA. I’m a big fan of ABBA’s music, so I’ve seen this show a couple of times and just love it. “Mamma Mia!” is such a big hit on the stage that on any given day there are at least seven performances going on somewhere in the world. There is a really interesting film version of the show that was released in 2008. I think the female lead Meryl Streep is wonderful in the movie, but the male leads … not so much! By the way, one can tell the difference between “Mamma Mia” the ABBA song and “Mamma Mia!” the musical, by noting the difference in the punctuation in the titles.

71. “Bye Bye Bye” boy band : NSYNC
NSYNC was a boy band from Orlando, Florida that was formed in 1995. The name of the group came from a comment by the mother of band member Justin Timberlake, who said the boys voices sounded “in sync”. But, it’s also true that the letters of the name NSYNC are the last letters of the given names of the five band members:

72. Crafts website : ETSY
Etsy.com is an e-commerce website where you can buy and sell the kind of items that you might find at a craft fair.

Down
4. “Sleepless in Seattle,” for one : ROM-COM
“Sleepless in Seattle” is a lovely romantic comedy directed and co-written by Nora Ephron, released in 1993. The film’s storyline is based on the excellent 1957 movie “An Affair to Remember”, and there are numerous direct references to the Cary Grant/Deborah Kerr classic throughout the “remake”. The lead roles in “Sleepless …” are played by Tom Hanks and Meg Ryan.

5. Nine-digit ID : SSN
A Social Security number (SSN) is divided into three parts i.e AAA-GG-SSSS, Originally, the Area Number (AAA) was the code for the office that issued the card. Since 1973, the Area Number reflects the ZIP code from which the application was made. The GG in the SSN is the Group Number, and the SSSS in the number is the Serial Number. However, this is all moot, as since 2011 SSN’s are assigned randomly.

9. ___ Palmas (province of Spain) : LAS
The Spanish province of Las Palmas comprises about half of the islands of Gran Canaria, and several other small islands, located off the northwest coast of Africa. Gran Canaria is perhaps better known as the “Canary Islands” in English.

The Canary Islands are located off the northwest coast of Africa. The islands aren’t named for the canary bird and in fact the bird is named for the islands. The name of the Canary Islands comes from the Latin “Canariae Insulae” which translates as “Island of the Dogs”, the original name for the biggest island now called Gran Canaria. In the days of Ancient Rome the island was noted as a home to a large number of very large dogs.

12. Savory sensation : UMAMI
Umami is one of the five basic tastes, along with sweet, sour, bitter and salty. “Umami” is a Japanese word used to describe “a pleasant savory taste”. Umami was proposed as a basic taste in 1908, but it wasn’t until 1985 that the scientific community finally accepted it as such.

18. Vegetable that’s a good source of protein : OKRA
The plant known as okra is mainly grown for it edible green pods. The pods are said to resemble “ladies’ fingers”, which is an alternative name for the plant. Okra is known as “ngombo” in Bantu, a name that might give us the word “gumbo”, the name for the name of the southern Louisiana stew that includes okra as a key ingredient.

27. Flair : ELAN
Our word “élan” was imported from French, in which language the word has a similar meaning to ours, i.e “style” or “flair”.

43. Couple : ITEM
An unmarried couple known to be involved with each other might appear in the gossip columns. This appearance as “an item” in the papers, led to the use of “item” to refer to such a couple, but only since the very early seventies.

52. 1998 movie with the song “I’ll Make a Man Out of You” : MULAN
“Mulan” is a 1998 animated feature film made by Walt Disney studios. The film is based on the Chinese legend of Hua Mulan, a woman who takes the place of her father in the army and serves with distinction for twelve years without reward. Disney’s lead character was given the name Fa Mulan. Donny Osmond provided the singing voice for one of the lead characters, after which his sons remarked that he had finally made it in show business as he was in a Disney film.

ASICS is a Japanese company that produces athletic gear, including running shoes. The name comes from the Latin phrase “”anima sana in corpore sano” which translates to “a healthy soul in a healthy body”.

54. With lance in hand : ATILT
Tilting is the most recognized form of jousting. Jousting can involve the use of a number of different weapons, but when lances are used the competition is called “tilting”. Jousting took place in a roped-off enclosure that was called the lists, or list field. In later medieval times, some castles and palaces had purpose-built “tiltyards” that were used for jousting. Do you remember where the Beach Volleyball events were held in the 2012 London Olympics? Well that was Horse Guards Parade, the former tiltyard for the Palace of Whitehall that was used in the time of King Henry VIII.

65. With 67-Down, tool for getting out of a window, in brief : ESC
67. See 65-Down : KEY
The escape key (esc) was originally used to control computer peripherals. It was a key that allowed the computer operator to stop what the peripheral was doing (cancel a print job, for example). Nowadays the escape key is used for all sorts of things, especially in gaming programs.