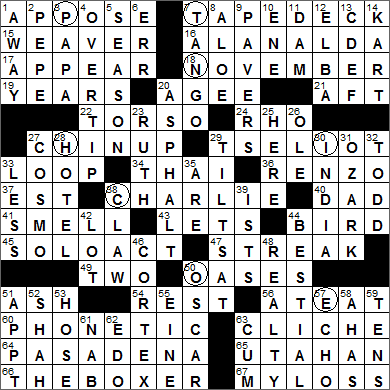 CROSSWORD SETTER: David J. Kahn
THEME: Phonetic
Today’s themed answers are the names of letters in the NATO PHONETIC alphabet. The initial letter of each themed answer is circled in the grid, and those letters can be arranged to spell out the word PHONETIC:

60A. Like the alphabet that includes the answers to the starred clues … and an anagram of the eight circled letters : PHONETIC

Today’s Wiki-est, Amazonian Googlies
Across
15. Relative of a finch known for building intricate nests : WEAVER
Weavers are small birds related to finches. Weavers are so called because they are known to weave the most elaborate nests of any bird.

16. “Bridge of Spies” actor : ALAN ALDA
Alan Alda has had a great television career, especially of course on “M*A*S*H”. Alda won his first Emmy in 1972, for playing Hawkeye Pierce on “M*A*S*H”. He won his most recent Emmy in 2006 for his portrayal of Presidential candidate Arnold Vinick in “The West Wing”. When it comes to the big screen, my favorite of Alda’s movies is the 1978 romantic comedy “Same Time, Next Year” in which he starred opposite Ellen Burstyn.

18. *When daylight saving time ends : NOVEMBER
November is the eleventh month in our calendar. The name comes from the Latin “novem” meaning “nine”, as November was the ninth month in the ancient Roman calendar.

20. 1940s film critic James : AGEE
James Agee was a noted American film critic and screenwriter. Agee wrote an autobiographical novel “A Death in the Family” that won him his Pulitzer in 1958, albeit posthumously. He was also one of the screenwriters for the 1951 classic movie “The African Queen”.

22. Where the heart lies : TORSO
“Torso” (plural “torsi”) is an Italian word meaning the “trunk of a statue”, and is a term that we imported into English.

24. Aristotle character : RHO
Rho is the Greek letter that looks just like our Roman letter “p”.

29. Poet who said “Most editors are failed writers – but so are most writers” : TS ELIOT
T. S. Eliot was born in New England but grew up in St. Louis, Missouri. Much of Eliot’s college education was at Oxford, and clearly he became comfortable with life in England. In 1927 he became a British citizen and lived the rest of life in the UK.

34. Cuisine with curry : THAI
Curry powder is a mixture of spices used in South Asian cuisine. The actual composition of curry powder varies depending on the cuisine. The term “curry” is an anglicization of the Tamil “kari” meaning “sauce”.

36. ___ Piano, designer of The New York Times Building : RENZO
Renzo Piano is renowned architect from Italy who was selected in 2006 as one of “Time” magazine’s 100 most influential people in the world. Piano was one of the designers of the Pompidou Centre in Paris completed in 1977. He also designed the New York Times Building completed in 2007 and the Shard in London, which was completed in 2012 and is the tallest building in the EU.

38. *Angels’ leader : CHARLIE
When the TV show “Charlie’s Angels” started airing in the mid-seventies, it was a little unusual in that it featured three women playing private detectives, a role usually reserved for men. The name first chosen for the show was “The Alley Cats”, then “Harry’s Angels”, before finally settling on “Charlie’s Angels”.

47. Run out of clothes? : STREAK
People have been running around naked for an awfully long time, but the application of the word “streaking” to the phenomenon only dates back to 1973. A journalist was reporting on a mass nude run of 533 people at the University of Maryland in 1973, and used the words “they are streaking (i.e. moving quickly) past me right now. It’s an incredible sight!”. The Associated Press picked up the story the next day, and interpreting “streaking” as the term to describe “running naked”, and we’ve been using it that way ever since.

60. Like the alphabet that includes the answers to the starred clues … and an anagram of the eight circled letters : PHONETIC
The NATO phonetic alphabet is also called the International Civil Aviation Organization (ICAO) phonetic alphabet. It goes Alfa, Bravo, Charlie … Zulu.

63. You’ve heard it many times before : CLICHE
“Cliché” is a word that comes from the world of printing. In the days when type was added as individual letters into a printing plate, for efficiency some oft-used phrases and words were created as one single slug of metal. The word “cliché” was used for such a grouping of letters. It’s easy to see how the same word would become a term to describe any overused phrase. Supposedly, “cliché” comes from French, from the verb “clicher” meaning “to click”. The idea is that when a matrix of letters was dropped in molten metal to make a cliché, it made a clicking sound.

64. Annual parade locale : PASADENA
The first Rose Parade was staged in 1890, on New Years Day in Pasadena, California. The initial parades were organized by the Pasadena Valley Hunt Club, whose members wanted to highlight the mild winter weather in the area. The initial parades did not feature flowers, but these were added to underscore the favorable climate. It was the inclusion of the flowers that gave rise to the name “Tournament of Roses”. The first Rose Bowl football game was played in 1902.

65. Brigham Young, e.g. : UTAHAN
Brigham Young was the second President of the Church of Jesus Christ of Latter-Day Saints. Young believed in and practiced polygamy, so he has a large family of descendants. One of his more famous great-great-great-grandsons is Steve Young, the retired quarterback for the San Francisco 49ers.

66. 1969 Simon & Garfunkel hit in which “lie-la-lie” is repeatedly sung : THE BOXER
Simon & Garfunkel’s 1968 hit “The Boxer” is remarkable for several reasons, I think, not least of which is the lovely chorus that simply uses the lyrics “lie-la-lie”. Paul Simon tells us that he originally intended to come up with words, and just used “lie-la-lie” as a placeholder, a temporary measure. Well, sometimes we don’t need to hear the words …

Down
2. Pet form of José : PEPE
“José” is the Spanish for “Joseph”. Friends might also refer to José as “Pepe”. Both José and Pepe derive from Saint Joseph, the father of Jesus. Saint Joseph is sometimes referred to as “padre putativo” meaning “presumed father”. The acronym “PP”, standing for “padre putativo”, led to the name “Pepe”.

3. *___ John’s : PAPA
Papa John’s is the third largest takeout and delivery pizza chain in the US, with Pizza Hut and Domino’s taking the top spots.

7. *Dance craze of the 1910s : TANGO
The dramatic dance called the tango originated in the late 1800s in the area along the border between Argentina and Uruguay. Dancers and orchestras from Buenos Aires in particular traveled to Europe and beyond in the early twentieth century and brought the tango with them. The tango craze first struck Europe in Paris in the 1910s, and from there spread to London and Berlin, crossing the Atlantic to New York in 1913.

8. What may come as a relief? : ALOE
Aloe vera has a number of alternate names that are descriptive of its efficacy as a medicine. These include the First Aid plant, Wand of Heaven, Silent Healer and Miracle Plant.

10. Chemistry suffix : -ENE
An alkene is an organic compound made up of carbon and hydrogen atoms. It differs from an alkane in that it has at least one C=C double bond. The simplest alkene is the gas ethylene, a major raw material used in the manufacture of plastics (like polyethylene).

12. Mandela player in a 2013 biopic : ELBA
The English actor Idris Elba is probably best known in North America for playing the drug lord Stringer Bell in the marvelous HBO drama series “The Wire”, and the title character in the 2013 film “Mandela: Long Walk to Freedom”. Off the screen, Elba works as a disk jockey using the name DJ Big Driis.

13. Scale opening : CDEF
That would the key of C in the world of music.

20. Supply for 9-Down : ASPHALT
(9D. Ones laying down 20-Down : PAVERS)
The asphalt surface on roads (or basketball courts) is more properly called asphaltic concrete, because asphalt itself is just a sticky black liquid that comes from crude petroleum. Asphalt is used as a binder with aggregate to form asphaltic concrete.

23. Legendary #3 on the diamond : RUTH
Baseball legend George Herman Ruth, Jr. had several nicknames, the best known being “Babe”. He was also called “the Bambino” and “the Sultan of Swat”.

27. Hearst mag : COSMO
“Cosmopolitan” magazine was first published way back in 1886! It started out life as a family magazine, then as a literary publication. “Cosmo” took its present form as a women’s magazine in the sixties.

29. Battles against : TILTS AT
The verb phrase “tilt at” meaning “fight with” derives from the sport of jousting, or “tilting”, in which contestants fought each other on horseback with lances.

30. *Origin of the game Parcheesi : INDIA
Pachisi is an ancient Indian game that has been commercialized in the West as Ludo, Sorry! and Parcheesi. The name derives from the Hindi “pachis” meaning “twenty-five”, which is the largest score that can thrown in one move in the original game.

32. Newsman Chuck : TODD
Chuck Todd is a television journalist. Todd was the Chief White House Correspondent for NBC, before taking over as moderator of “Meet the Press” in 2014.

46. Part of the cerebrum : CORTEX
The outermost layer of an organ is known as the cortex. The cortical layer that is most familiar to the man on the street (like me!) is that of the brain, the cerebral cortex.

48. Land : REALTY
The terms “realty” and “real estate” date back to the later 1600s, and are derived from the earlier meaning “real possession”, something one owns that is tangible and real.

50. *To get one, act now! : OSCAR
The Academy of Motion Picture Arts and Sciences (AMPAS) is the organization that gives the annual Academy Awards also known as the “Oscars”. The root of the name “Oscar” is hotly debated, but what is agreed is that the award was officially named “Oscar” in 1939. The first Academy Awards were presented at a brunch in 1929 with an audience of just 29 people. The Awards ceremony is a slightly bigger event these days …

52. Onetime royal : SHAH
The last Shah of Iran was Mohammed-Reza Shah Pahlavi, as he was overthrown in the revolution led by the Ayatollah Khomeini in 1979. The post-revolution government sought the extradition of the Shah back to Iran while he was in the United States seeking medical care (he had cancer). His prolonged stay in the United States, recovering from surgery, caused some unrest back in Iran and resentment towards the United States. Some say that this resentment precipitated the storming of the US Embassy in Tehran and the resulting hostage crisis.

55. One from Germany : EINE
“Eine” is the German indefinite article used with feminine nouns.

58. Epiphanies : AHAS
An “epiphany” is an appearance or manifestation, especially of a supreme being. By extension, “epiphany” can also apply to a sudden insight or intuitive perception. The term derives from the Greek “epiphainein” meaning “to manifest, display”.