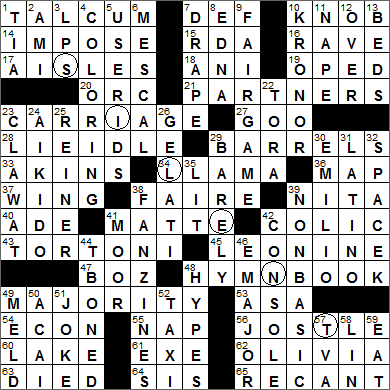 CROSSWORD SETTER: Damon J. Gulczynski
THEME: Silent Letters
The circled letters running diagonally across the grid spell the word SILENT. That letter is actually SILENT in the across-answer. And, the word SILENT is needed to complete a couple of answers:

Today’s Wiki-est, Amazonian Googlies
Across
1. Powder used to combat moisture : TALCUM
Talc is a mineral, actually hydrated magnesium silicate. Talcum powder is composed of loose talc, although these days “baby powder” is also made from cornstarch.

16. Party that might start after midnight : RAVE
As you might imagine, I’ve never been to a rave, and don’t have one upcoming in my diary. And as raves often start at 2 a.m. then I’m unlikely ever to experience one. A rave is generally an all-night party featuring loud, electronically-synthesized music usually played by a DJ as opposed to a live band.

17. Pair of big jets? : AISLES
There are a pair of aisles in wide-body jets.

18. “Evolve” artist DiFranco : ANI
Ani DiFranco is a folk-rock singer and songwriter. DiFranco has also been labeled a “feminist icon”, and in 2006 won the “Woman of Courage Award” from National Organization of Women.

20. Monster of fantasy : ORC
Orcs are mythical humanoid creatures that appear in the writings of J. R. R. Tolkien. Since Tolkien’s use of orcs, they have also been featured in other fantasy fiction and in fantasy games.

29. Crude measurements? : BARRELS
The volume of one oil barrel is equivalent to 42 US gallons. A barrel is correctly abbreviated to “bbl”. Barrels aren’t really used for transporting crude oil anymore. Instead, oil moves in bulk through pipelines and in tankers. “Barrel” is just a quantity these days.

33. Claude who played Sheriff Lobo : AKINS
Claude Akins was an actor from Nelson, Georgia. Although Akins acted in many Hollywood films, he is best remembered for playing Sheriff Lobo in the seventies TV show “B. J. and the Bear”.

34. Source of soft wool : LLAMA
The wool from a llama is much softer than that from a sheep, and it is also free from lanolin.

41. Photo finish : MATTE
“Matte”, meaning flat and lusterless, comes from the Old French word “mat” meaning beaten down and withered. In turn, the French “mat” comes from the Latin “maddus”, meaning “maudlin with drink”. Sometimes I wonder about these derivations …

42. Woe for newborns (and thus new parents as well) : COLIC
Baby colic is a condition in which a baby cries for no apparent reason for extended periods. At least one study has shown that breastfed babies are about half as likely to suffer from colic.

43. Trattoria dessert : TORTONI
Biscuit Tortoni is an ice cream dessert made with eggs and heavy cream and usually enhanced with a couple of teaspoons of rum. “Tortoni” was apparently an 18th century owner of an Italian café in Paris.

45. Strong and proud : LEONINE
Something described as “leonine” has the characteristics of a lion, is strong and regal. “Leo” is Latin for “lion”.

47. Dickens pen name : BOZ
The English author Charles Dickens used the pen-name “Boz” early in his career. He had already established himself as the most famous novelist of the Victorian Era when he came to visit America in 1842. He was honored by 3,000 of New York’s elite at a “Boz Ball” in the Park Theater.

48. Singer’s volume? : HYMN BOOK
A “hymn” is a song of praise or thanksgiving to a deity. The term comes into English via Old French and is ultimately derived from the Greek “hymnos”, the word for an ode or song in praise of the gods. The Greek term is possibly a variant of “hymenaios” meaning “wedding song”, derived from Hymen, the Greek god of marriage.

54. Nobel Prize subj. : ECON
The Peace Prize is the most famous of the five prizes bequeathed by Alfred Nobel. The others are for Physics, Chemistry, Physiology or Medicine, and Literature. There is also a Nobel Prize in Economics that is awarded along with the original five, but it is funded separately and is awarded “in memory of Alfred Nobel”. Four of the prizes are awarded by Swedish organizations (Alfred Nobel was a Swede) and so the award ceremonies take place in Stockholm. The Peace Prize is awarded by the Norwegian Nobel Committee, and that award is presented in Oslo.

61. Computer file suffix : EXE
In the Windows Operating System, a file with the extension .exe is an “executable” file.

62. Wilde of TV’s “House” : OLIVIA
The actress Olivia Wilde’s break came with role of “Thirteen” on the medical drama “House”. Olivia’s birth name is Cockburn, and she chose her stage name in honor of Irish author Oscar Wilde.

64. Paige, to Jason, in “FoxTrot” : SIS
“FoxTrot” is a comic strip by Bill Amend that was first published in 1988. Originally appearing seven days a week, “Foxtrot” has been a Sunday-only offering since 2007. The strip’s main characters are the five members of the Fox family, and Quincy, the pet iguana belonging to the youngest Fox child.

65. Unsay : RECANT
Our term “to recant”, meaning “to retract, take back” comes directly from the Latin “recantare”, which has the same meaning. In turn, “recantare” derives from “re-” (back) and “cantare” (to chant).

3. A D.J. might spin them : LPS
The world’s first radio disk jockey (DJ) was one Ray Newby of Stockton, California who made his debut broadcast in 1909, would you believe? When he was 16 years old and a student, Newby started to play his records on a primitive radio located in the Herrold College of Engineering and Wireless in San Jose. The records played back then were mostly recordings of Enrico Caruso.

6. Agave drink : MESCAL
Tequila is a city in Mexico that is located about 40 miles northwest of Guadalajara in the state of Jalisco. The city is the birthplace of the drink called “tequila”. Local people made a variety of a drink called mescal by fermenting the heart of the blue agave plant that is native to the area surrounding Tequila. It was the Spanish who introduced the distillation process to the mescal, giving us what we now know as “tequila”.

8. “Downton Abbey” maid : EDNA
Edna Braithwaite was a general maid at Downton Abbey who leaves and returns in the storyline as a lady’s maid.

10. Swedish money : KRONOR
“Krona” translates in English as “crown”, and is the currency of Sweden (plural “kronor”). As a member of the European Union, Sweden is required to adopt the euro as its official currency. Such a move isn’t really popular in Sweden and so the Swedish government has been using a legal loophole to allow the country to retain the krona.

25. “Stand by Me” director, 1986 : REINER
The great director and actor Rob Reiner first came to prominence playing “Meathead”, Archie and Edith Bunker’s son-in-law in “All in the Family” (for which he won Emmy Awards in 1974 and 1978). Since then, Reiner has directed a long string of hit movies including, “The Princess Bride”, “Stand by Me”, “This Is Spinal Tap”, “When Harry Met Sally”, “Misery” and “A Few Good Men”.

“Stand by Me” is 1986 film directed by Rob Reiner that is based on a Stephen King novella called “The Body”. The title of the movie comes from the wonderful Ben E. King song of the same name.

26. Trattoria desserts : GELATI
Gelato (plural “gelati”) is the Italian version of American ice cream, differing in that it has a lower butterfat content than its US counterpart.

30. Estevez of the Brat Pack : EMILIO
Emilio Estevez is one of the members of Hollywood’s famous “Brat Pack”, having appeared in “The Breakfast Club” and “St. Elmo’s Fire”. Estevez’s father (and can’t you tell it from looking at him?) is actor Martin Sheen. Estevez decided to keep his father’s real name, and not the stage name of “Sheen”. Charlie Sheen is Emilio’s brother, and Charlie’s real name is Carlos Estevez.

31. Many a Dream Act beneficiary : LATINO
The DREAM Act is proposed legislation that has been floating Washington around since 2001. The bill provides permanent residency to some immigrants who are deemed to be of good character and who have fulfilled certain conditions mainly related to education or to public service. The acronym DREAM stands for “Development, Relief, and Education for Alien Minors”.

32. Sissy of Netflix’s “Bloodline” : SPACEK
The actress Sissy Spacek probably got her big break in movies when she played the title role in the 1976 horror movie “Carrie”, which is based on the Stephen King novel. Her most acclaimed role is the lead in the 1980 biopic about Loretta Lynn called “Coal Miner’s Daughter”, for which she won an Oscar. Spacek’s first cousin is the actor Rip Torn.

“Bloodline” is a Netflix original TV drama show. I haven’t seen this one, but I hear good things.

38. Publications for and by aficionados : FANZINES
Fanboys (and fangirls) are fans, but fans of a very specific subject in a particular field. So, someone might be a fan of home computing, but an Intel fanboy would have an enthusiasm for CPUs made by Intel. A fanzine (also “zine”) is a fan publication with a very limited circulation, dealing with a very specific subject matter. Fanzines are usually desktop published and distributed electronically or as photocopies.

An “aficionado” is an enthusiast, a word that came to us from Spanish. “Aficionado” was originally used in English to describe a devotee of bullfighting.

39. 7 or below on the pH scale : NONBASIC
As we all recall from chemistry class, a pH of 7 is considered neutral. Anything less than 7 is an acid, and anything above 7 is a base.

42. Wii, for one : CONSOLE
The Wii is the biggest-selling game console in the world.

44. Broadsided, informally : T-BONED
A broadside collision between two cars is also known as a right-angle or t-bone collision. The side of one vehicle is impacted by the front of another, often leaving the vehicles locked in a T-formation.

50. Berry advertised as healthful : ACAI
Açaí is a palm tree native to Central and South America. The fruit has become very popular in recent years and its juice is a very fashionable addition to juice mixes and smoothies.

57. F.D.R. program, for short : TVA
The Tennessee Valley Authority (TVA) has to be one of America’s great success stories when it comes to economic development. Created in 1933, the TVA spearheaded economic development in the Tennessee Valley at the height of the Great Depression. Central to the success was the federally-funded construction of flood-control and electricity-generation facilities.