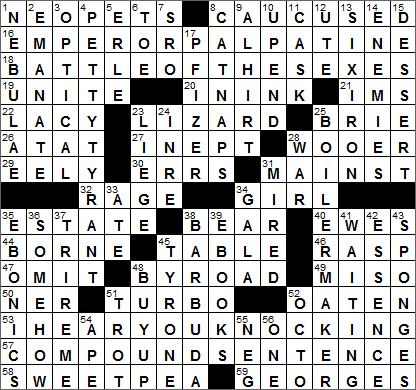 Today’s Wiki-est, Amazonian Googlies
Across
1. Popular website with virtual animals : NEOPETS
Neopets is website where one can own a virtual pet. I wouldn’t bother …

8. Met for a party? : CAUCUSED
A “caucus” is a meeting of supporters of a particular political group. It is believed that the term was first used in the original North American colonies.

16. Film villain who says “Your feeble skills are no match for the power of the dark side” : EMPEROR PALPATINE
Palpatine is the Dark Lord of the Sith in the “Star Wars” universe. In most of the films in the series, Palpatine is played by Scottish actor Ian McDiarmid. In “The Empire Strikes Back”, he was actually played by a woman, the wife of special makeup effects artist Rick Baker, and voiced by New Zealand actor Clive Revill.

21. Some AOL exchanges : IMS
Even though instant messaging (sending IMs) has been around since the 1960s, it was AOL that popularized the term “instant message” in the eighties and nineties.

22. Like teddies, often : LACY
The item of lingerie known as a teddy can also be called “camiknickers”. The alternative name was used when the one-piece garment was introduced in the twenties, a combination of a camisole and panties (aka knickers).

25. Wheel that runs? : BRIE
Brie is a soft cheese, named after the French region from which it originated. Brie is similar to the equally famous (and delicious) Camembert.

35. Executor’s charge : ESTATE
In general terms, an executor is a person responsible for the execution of some task. Most commonly, it is the person who has been designated to carry out the directions called out in someone’s will after the person is deceased. So, the executor has the necessary authority to distribute assets, pay bills etc. The executor usually works alongside the attorney for the estate.

40. Bellwether’s “belles” : EWES
A “wether” is a castrated male sheep. A “bellwether” is one such sheep that leads the flock, usually wearing a bell around its neck, hence the name. We use the term “bellwether” more generally to mean any person or thing which assumes leadership or indicates a trend.

45. Put on hold : TABLE
These “tabling” and “shelving” idioms drive me crazy, because they are often misused. If a topic is shelved, it is set aside. If a topic is tabled, it is brought “off the shelf” and put “on the table” for discussion. But, maybe it’s just me …

48. Route through the boondocks : BYROAD
“Boondocks” is a term used in North America for a remote, usually rural area. Often the term is used derogatively, implying that a remote location is unsophisticated. “Boondocks” was first used by American soldiers stationed in the Philippines in the early 1900s. The word evolved from the Tagalog “bundok” meaning “mountain”.

49. Protein-rich paste : MISO
Miso is the name of the seasoning that makes the soup. Basic miso seasoning is made by fermenting rice, barley and soybeans with salt and a fungus to produce a paste. The paste can be added to stock to make miso soup, or perhaps to flavor tofu.

50. ___ Tamid (synagogue lamp) : NER
“Ner tamid” is the Hebrew term for a sanctuary lamp, although it is often referred to in English as “eternal flame”.

51. Raiser of horses? : TURBO
A turbocharger is a device that is designed to extract more power out of an internal combustion engine. It does so by increasing the pressure of the air entering the intake. The pressure increase comes from the use of a compressor, which is cleverly powered by the engine’s own exhaust gases.

53. Classic R&B hit about a returning lover : I HEAR YOU KNOCKING
“I Hear You Knocking” is and R&B classic that was first recorded by Smiley Lewis in 1955. For my money, the 1970 cover version by Welshman Dave Edmunds is the definitive rendition. Great song …

59. Post-Impressionist Seurat : GEORGES
Georges Seurat was a French Post-Impressionist. His most famous work, in the pointillist style, can be viewed in the Art Institute of Chicago, “A Sunday Afternoon on the Island of La Grande Jatte – 1884”. If you’ve seen the movie “Ferris Bueller’s Day Off”, it features quite prominently in a wonderful, wonderful scene shot at the gallery.

Down
1. Very distant clouds : NEBULAE
In astronomical terms a nebula is a cloud of dust and ionized gases (“nebula” is the Latin for “cloud”). Many nebulae form as gases collapse in on themselves under the influence of enormous gravitational forces. Ultimately these collapses can result in the creation of new stars.

3. Like spectroscopes and microscopes : OPTICAL
A spectrometer (also “spectroscope”) is a scientific instrument that produces a spectrum using a prism, and also measures the intensity of radiation at varying wavelengths within that spectrum.

5. Director ___ C. Kenton : ERLE
Erle Kenton was a film director from Norbro, Montana. Kenton directed 131 films between 1916 and 1957, including “The Ghost of Frankenstein”, “House of Frankenstein” and “House of Dracula”.

12. Literally, “land of the sun” : UTE
The Ute is a group of Native American tribes that now resides in Utah and Colorado. The Ute were not a unified people as such, but rather a loose association of nomadic groups. The word “Ute” means “Land of the Sun”, and “Ute” also gave us the state name “Utah”.

14. Adams and Jefferson, e.g. : ENEMIES
Thomas Jefferson was a very close friend of John Adams, a friendship dating back to the time of the Second Continental Congress. Jefferson and Adams developed differing views on important subjects and had many debates, both directly and in correspondence. They also had an “up and down” relationship, with long periods of coolness. The two former presidents both died on the same day, in 1826. If that isn’t an amazing enough coincidence, they passed away on July 4th, Independence Day.

17. Big name in drugs : PFIZER
Pfizer is a pharmaceutical company based in New York City that was founded in 1849 by cousins Charles Pfizer and Charles Erhart. Pfizer has an impressive list of successful products that includes Lipitor (to lower cholesterol), Viagra (to help with erectile disfunction) and Celebrex (an anti-inflammatory).

23. Feudal lord : LIEGE
A liege was a feudal lord, one to whom service or allegiance was owed under feudal law. “Liege” was also the term used for one who owed allegiance or service to a lord. Very confusing …

25. Beer-and-whiskey cocktail : BOILERMAKER
A boilermaker is a beer cocktail, a serving of beer mixed with a shot of whiskey, or sometimes a shot of tequila or vodka. If the whiskey is still in a shot glass when it’s dropped into the beer, then it’s known as a depth charge.

28. “… let slip the dogs of ___”: Shak. : WAR
The phrase “dogs of war” comes from William Shakespeare’s “Julius Caesar”. The “dogs of war” are soldiers. Marc Anthony speaks the following lines:

And Caesar’s spirit, raging for revenge,
With Ate by his side come hot from hell,
Shall in these confines with a monarch’s voice
Cry “Havoc!” and let slip the dogs of war,
That this foul deed shall smell above the earth
With carrion men, groaning for burial.

35. Vernacular much debated in the 1990s : EBONICS
The term “Ebonics” refers to vernacular English used by African Americans. “Ebonics” is a blend of the words “ebony” and “phonics”. It is not a term that is embraced universally.

37. Ancient Greek craft : TRIREME
Triremes were galleys used in the Mediterranean by a number of cultures, including the Ancient Greeks and Romans. The trireme was so called because there were three rows of oars on each side of the vessel. The term “trireme” comes from the Latin “tres remi” meaning “three-oar”. There was also a less ambitious version of the trireme that had only two banks of oars, and that was known as a bireme.

38. Island north of Antigua : BARBUDA
Antigua is an island in the West Indies, and is the main island of the country of Antigua and Barbuda. These twin islands take their names from the Spanish for “ancient” and “bearded”.

45. Power in old films : TYRONE
Tyrone Power was a Hollywood actor from Cincinnati, Ohio. Power tended to play the romantic lead, as well as the swashbuckler that was so popular in the thirties. His career was interrupted during WWII when he volunteered to serve with the Marine Corps as a pilot. Power served with distinction and resumed his career after the war. He died on set, suffering a massive heart attack while filming a sword duel with his friend George Sanders. Power was only 44 years of age.

55. Bit of blood-typing shorthand : NEG
The most important grouping of blood types is the ABO system. Blood is classified as either A, B, AB or O, depending on the type of antigens on the surface of the red blood cells. A secondary designation of blood is the Rh factor, in which other antigens are labelled as either positive or negative. When a patient receives a blood transfusion, ideally the donor blood should be the same type as that of the recipient, as incompatible blood cells can be rejected. However, blood type O-neg can be accepted by recipients with all blood types, A, B, AB or O, and positive or negative. Hence someone with O-neg blood type is called a “universal donor”.

1892: I pledge allegiance to my flag and the republic for which it stands: one nation indivisible with liberty and justice for all.

1954: I pledge allegiance to the flag of the United States of America, and to the republic for which it stands, one nation under God, indivisible, with liberty and justice for all.