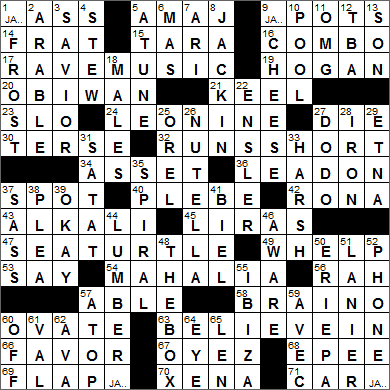 CROSSWORD SETTER: Susan Gelfand
THEME: Jack-in-the-Box
We have a rebus puzzle today, with the word JACK in several squares/BOXES (“JA..” in my grid).

Today’s Wiki-est, Amazonian Googlies
Across
1. Fool : JACKASS
A female donkey is known as a jenny, and a male is known as a jack, or sometimes a “jackass”. We started using the term “jackass” to mean “fool” in the 1820s.

5. Key of Beethoven’s Symphony No. 7: Abbr. : A MAJ
If I had to name which of Beethoven’s symphonies I listen to most often, at the top of the list comes the 7th followed closely by the 9th, and then the 5th a little further down. But that four-note opening of the 5th … that is superb …

9. Top prizes : JACKPOTS
The term “jackpot” dates back to the 1800s and is from the game of poker. In some variants there are progressive antes, meaning that players have to “ante up” when no player has a pair of “jacks” or better … building a “jackpot”.

15. Fictional home that was won in an all-night poker game : TARA
Scarlett O’Hara’s home is the Tara plantation, in Margaret Mitchell’s “Gone with the Wind”. Tara was founded not far from the Georgia city of Jonesboro by Scarlett’s father, Irish immigrant Gerald O’Hara. Gerald won the square mile of land on which Tara was built in an all-night poker. He named his new abode after the Hill of Tara back in his home country, the ancient seat of the High King of Ireland.

17. Electro house or dubstep : RAVE MUSIC
As you might imagine, I’ve never been to a rave, and don’t have one upcoming in my diary. And as raves often start at 2 a.m. then I’m unlikely ever to experience one. A rave is generally an all-night party featuring loud, electronically-synthesized music usually played by a DJ as opposed to a live band.

19. Navajo dwelling : HOGAN
Hogan is the anglicization of a Navajo word meaning “the home place”.

20. Luke’s mentor : OBI-WAN
Obi-Wan Kenobi is one of the more beloved of the “Star Wars” characters. Kenobi was portrayed by two fabulous actors in the series of films. As a young man he is played by Scottish actor Ewan McGregor, and as an older man he is played by Alec Guinness.

24. Strong and majestic : LEONINE
Something described as “leonine” has the characteristics of a lion, is strong and regal. “Leo” is Latin for “lion”.

27. Something that may be loaded : DIE
The numbers on dice are arranged so that the opposite faces add up to seven. Given this arrangement, the numbers 1, 2 and 3 all meet at a common vertex. There are two ways of arranging the 1, 2 and 3 around the common vertex, a so called right-handed die (clockwise 1-2-3) or a left-handed die (counterclockwise 1-2-3). Traditionally, dice used in Western cultures are right-handed, whereas Chinese dice are left-handed. Quite interesting …

36. Play the siren to : LEAD ON
In Greek mythology, the Sirens were seductive bird-women who lured men to their deaths with their song. When Odysseus sailed closed to the island home of the Sirens he wanted to hear their voices, but in safety. He had his men plug their ears with beeswax and then ordered them to tie him to the mast and not to free him until they were safe. On hearing their song Odysseus begged to be let loose, but the sailors just tightened his bonds and and the whole crew sailed away unharmed.

40. Academy newbie : PLEBE
Plebe is a slang term for a freshman in the US military and naval academies. Plebe is probably short for “plebeian”, the name given to someone of the common class in Ancient Rome (as opposed to a Patrician). “Pleb” is a shortened version of plebeian, and is a term used outside of the military schools.

42. Literary Jaffe : RONA
Rona Jaffe was an American novelist perhaps most famous for two of her books, “The Best of Everything” and “Mazes and Monsters”. “The Best of Everything” was published in 1958 and has been compared with the HBO television series “Sex and the City” as it depicts women in the working world. “Mazes and Monsters” was published in 1981 and explores a role-playing game similar to Dungeons & Dragons and the impact it has on players.

45. Turkish moolah : LIRAS
The currency of Turkey is the Turkish lira, which is divided into 100 kuruş.

47. Creature that comes ashore to lay eggs : SEA TURTLE
Sea turtles don’t reach sexual maturity until they are decades old. Turtles mate at sea and then the females head to the shore to lay their eggs. Often times, the female turtle returns to the very same beach where she herself hatched.

54. First name in gospel : MAHALIA
Mahalia Jackson was an African-American gospel singer, known as the first Queen of Gospel Music. She recorded many records, including 12 that went “gold”, sold more than a million copies each.

67. Court call : OYEZ!
Town criers make public announcements on the streets, usually shouting “Oyez! Oyez! Oyez!” to attract attention. The term “oyez” derives from the Anglo-Norman word for “listen” and is used in this instance to me “Hear ye!”

68. Jabber? : EPEE
The sword known as an épée has a three-sided blade. The épée is similar to a foil and sabre, both of which are also thrusting weapons. However, the foil and saber have rectangular cross-sections.

70. “Hercules” spinoff, informally : XENA
The Xena character, played by New Zealander Lucy Lawless, was introduced in a made-for-TV movie called “Hercules and the Amazon Women”. Lawless reprised the role in a series called “Hercules: The Legendary Journeys”. Xena became so popular that a series was built around her character, with Lawless retained for the title role. The fictional Xena supposedly came from the “non-fictional” Greek city of Amphipolis.

Down
1. Nose nipper : JACK FROST
Our Jack Frost is based on a character in Viking lore called Jokul Frosti, meaning “icicle frost”.

8. With 48-Down, children’s toy … or a hint to this puzzle’s theme : JACK-IN
48. See 8-Down : -THE-BOX
A Jack-in-the-box is child’s toy. It’s a box with a crank handle at the side. Turning the crank causes a tune to play (usually “Pop Goes the Weasel”), and at the right moment the lid pops open and a spring loaded clown character jumps up out of the box.

9. Common quesadilla filler : JACK CHEESE
What we now call Monterey Jack cheese was originally made by Franciscan friars in Monterey, California in the 19th century. In the 1800s, a powerful landowner called David Jack started to make the same cheese as the friars in his own dairy, and marketed it as “Jack’s Cheese” and later “Monterey Jack”.

12. Sched. uncertainty : TBA
Something not yet on the schedule (sked) is to be advised (TBA)

22. Playwright Eve : ENSLER
Eve Ensler is a playwright whose most famous work is “The Vagina Monologues”. When Ensler was only 23 years of age she adopted a 15 year old boy. We are familiar with that boy on the big screen these days: actor Dylan McDermott.

25. Cy Young winner Hershiser : OREL
Orel Hershiser is big into poker now that he has retired from Major League Baseball. Hershiser lives in Las Vegas and when he isn’t working for ESPN, apparently he is at the poker tables, playing professionally. When Hershiser is eliminated in a poker tournament, he is in the habit of presenting the person who ousts him with an autographed baseball.

26. Chocolaty spread : NUTELLA
Nutella is a delicious hazelnut chocolate spread made by Ferrero, a company based in Italy. Sadly, 70% of the Nutella recipe is saturated fat and processed sugar.

29. European erupter : ETNA
Mt. Etna is the largest of three active volcanoes in Italy. Mt Etna is about 2 1/2 times the height of its equally famous sister, Mt. Vesuvius. Etna is home to a 110-km long narrow-guage railway, and two ski resorts.

35. Rotini shape : SPIRAL
Rotini is the corkscrew-shaped pasta that is often used in pasta salads. Even though “rotini” sounds like it comes from a word meaning “twist, rotate”, the word “rotini” doesn’t exist in Italian, other than as the name for the pasta.

50. Home of Gannon Univ. : ERIE, PA
Gannon University in Erie, PA is a private Catholic school founded in 1925. It is named after the then Bishop of Erie, John Mark Gannon, the man most influential in the establishment of the university.

51. N.B.A. Hall-of-Famer Bob : LANIER
Bob Lanier is a retired NBA player who turned out for the Detroit Pistons and the Milwaukee Bucks.

55. Neighbor of Majorca : IBIZA
Ibiza is a Mediterranean island almost 100 miles off the Spanish coast. It is a very popular tourist destination, largely for its legendary nightlife.

62. Sinatra’s wife between Nancy and Mia : AVA
Ava Gardner is noted for her association with some big movies, but also for her association with some big names when it came to the men in her life. In the world of film, she appeared in the likes of “Mogambo” (1953), “On the Beach” (1959), “The Night of the Iguana” (1964) and “Earthquake” (1974). The men in her life included husbands Mickey Rooney, Artie Shaw and Frank Sinatra. After her marriages had failed (and perhaps before!) she had long-term relationships with Howard Hughes and bullfighter Luis Miguel Dominguin whom she met through her friend Ernest Hemingway.

65. Writer Deighton : LEN
I used to walk my dog right past author Len Deighton’s house years ago, as we lived in the same village in Ireland (probably my only claim to fame!). Deighton wrote the excellent espionage thriller “The IPCRESS File”, made into a 1965 movie starring Michael Caine.