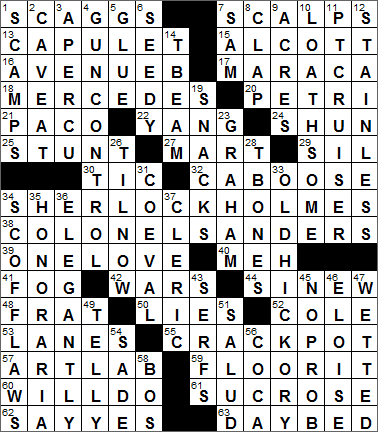 13. House of Tybalt and Juliet : CAPULET
In William Shakespeare’s play “Romeo and Juliet”, the main antagonist of the piece is Tybalt, who is a very combative cousin of Juliet and a sworn enemy of Romeo.

17. Staple of Caribbean music : MARACA
Maracas are percussion instruments native to Latin America. They are constructed from a dried shell, like that of a coconut, to which a handle is attached. The shell is filled with dried seeds or beans, and shaken.

18. Car mentioned in “Hotel California,” informally : MERCEDES
“Hotel California” is the title song from a 1997 album released by the Eagles. The song is allegorical in nature, and tells of a luxury hotel where one can check in, but never check out. The hotel is a symbol for the California music industry of the seventies that destroyed so many people who were trapped by it. There is an unrelated Hotel California in San Francisco, my favorite of the city’s “boutique” and reasonable priced places to stay.

20. Eponymous bacteriologist Julius : PETRI
Julius Richard Petri was a German bacteriologist and was the man after whom the Petri dish is named. The petri dish can have an agar gel on the bottom which acts a nutrient source for the specimen being grown and studied, in which case the dish plus agar is referred to as an “agar plate”.

21. Nickname for Francisco : PACO
Both “Paco” and “Pancho” are nicknames for the Spanish name Francisco.

22. The so-called “sunny side” : YANG
The yin and the yang can be explained using many different metaphors. In one, as the sun shines on a mountain, the side in the shade is the yin and the side in the light is the yang. The yin is also regarded as the feminine side, and the yang the masculine. The yin can also be associated with the moon, while the yang is associated with the sun.

29. Steven Van Zandt’s role on “The Sopranos,” informally : SIL
The character Silvio Dante on HBO’s excellent series “The Sopranos” really is comical looking. He has the dyed hair, possibly a wig that’s truly “big hair”, and all the jewelry and mannerisms that one possibly does not expect from a Consigliere. “Sil” is played by actor Steven Van Zandt, who is also a member of Bruce Springsteen’s E Street Band, in which he plays guitar and mandolin. Who knew … ?!

32. Back on track? : CABOOSE
The word “caboose” originally came from Middle Dutch and was the word for a ship’s galley. When the last car in a train in North America was given a stove for the comfort of the crew, it took on the name “caboose”. The term has also become slang for a person’s backside.

34. Who said “There is nothing more deceptive than an obvious fact” : SHERLOCK HOLMES
According to author Sir Arthur Conan Doyle, his Sherlock Holmes character was based on a Dr. Joseph Bell for whom Doyle worked in Edinburgh. That said, Bell actually wrote a letter to Doyle in which he said “you are yourself Sherlock Holmes and well you know it”.

38. Wing man? : COLONEL SANDERS
The famous “Colonel” of Kentucky Fried Chicken fame was Harland Sanders, an entrepreneur from Henryville, Indiana. Although not really a “Colonel”, Sanders did indeed serve in the military. He enlisted in the Army as a private in 1906 at the age of 16, lying about his age. He spent the whole of his time in the Army as a soldier in Cuba. It was much later, in the 1930s, that Sanders went into the restaurant business making his specialty deep-fried chicken. By 1935 his reputation as a “character” had grown, so much so that Governor Ruby Laffoon of Kentucky gave Sanders the honorary title of “Kentucky Colonel”. Later in the fifties, Sanders developed his trademark look with the white suit, string tie, mustache and goatee. When Sanders was 65 however, his business failed and in stepped Dave Thomas, the founder of Wendy’s. Thomas simplified the Sanders menu, cutting it back from over a hundred items to just fried chicken and salads. That was enough to launch KFC into the fast food business. Sanders sold the US franchise in 1964 for just $2 million and moved to Canada to grow KFC north of the border. He died in 1980 and is buried in Louisville, Kentucky. The Colonel’s secret recipe of 11 herbs and spices is indeed a trade secret. Apparently there is only one copy of the recipe, a handwritten piece of paper, written in pencil and signed by Colonel Sanders. Since 2009, the piece of paper has been locked in a computerized vault surrounded with motion detectors and security cameras.

42. Polemologists study them : WARS
“Polemology” is the study of war and human conflict. The term comes from the Greek “polemos” meaning “war”.

61. Rock candy, essentially : SUCROSE
Rock candy is made up of extra large crystals of sugar. It is made by growing sugar crystals in a supersaturated solution of sugar and water, just like we all did in science class at school, remember?

Down
2. But : CAVEAT
A caveat is a warning or a qualification. “Caveat” is the Latin for “let him beware”.

3. Illuminating comment : APERCU
An “apercu” is a first view, a glance. By extension, the term “apercu” can also be used for a detached view, an overview or a short synopsis. “Aperçu” is French for “perceived”.

4. Something a politician proposes that takes heat? : GUN CONTROL
“Packing” and “packing heat” are underworld slang for “carrying a gun”.

6. Slummy : SEEDY
We use the word “seedy” to mean “shabby”. The usage probably arose from the appearance of a flowering plant that has gone to seed.

7. Who sings “As Time Goes By” in “Casablanca” : SAM
The movie “Casablanca” was released in January of 1943, timed to coincide with the Casablanca Conference, the high-level meeting between Roosevelt and Churchill. The film wasn’t a box-office hit, but gained critical acclaim, winning three Oscars including Best Picture. The signature song “As Time Goes By” was written many years earlier for a 1931 Broadway musical called “Everybody’s Welcome”, and was a hit in 1931 for Rudy Vallee. But today we all remember the Casablanca version, sung by Dooley Wilson (who played “Sam” in the film). Poor Dooley didn’t get to record it as a single, due to a musician’s strike in 1943, so the 1931 Rudy Vallee version was re-released that year and became an even bigger hit second time round.

11. 2000s retro Chrysler : PT CRUISER
Chrysler’s PT Cruiser has a lovely retro styling (I think). The look and feel of the car was heavily influenced by the Chrysler Airflow from the 1930s. The PT Cruiser was introduced in 2000, and sadly was withdrawn in 2010.

12. Kind of steel : STAINLESS
In order to resist the tendency to rust, stainless steel (as opposed to carbon steel) has about 11% chromium. Stainless steel does in fact tend to rust, but just not as easily as regular carbon steel.

23. Katharine ___, onetime publisher of the Washington Post : GRAHAM
Katharine Graham was part of the Graham family that owned “The Washington Post” for many years. Katharine herself was at the helm at “The Post” for over 20 years, including the period when the paper was breaking the Watergate story that eventually brought down President Richard Nixon.

28. Hits on the side … or cuts from the back : T-BONES
A broadside collision between two cars is also known as a right-angle or t-bone collision. The side of one vehicle is impacted by the front of another, often leaving the vehicles locked in a T-formation.

31. Agemate : COEVAL
Things or people that are of equal age are said to be “coeval”. “Aevum” is Latin for “age”.

33. Andrew Jackson nickname : OLD HICKORY
Like many of the earlier US presidents, Andrew Jackson was a career military man. Jackson distinguished himself as commander of American forces during the War of 1812, particularly in the defense of New Orleans. He had a reputation of being fair to his troops, but strict. It was during this time that he was described as “tough as old hickory”, giving rise to the nickname “Old Hickory” that stuck with him for life.

34. Jaywalkers, e.g. : SCOFFLAWS
A “scofflaw” is someone who flouts the law, although usually the term applies to folks commit misdemeanors such as jaywalking and not paying parking fines.

35. Payments to speakers, say : HONORARIA
An “honorarium” is a payment made to a professional for a service that usually does not merit a fee. The term is Latin, and was originally used for a bribe that was paid to be awarded an honorary post.

43. Low class : SERFS
A serf was a member of the lowest feudal class, someone attached to land owned by a lord. “Serf” comes from the Latin “servus”, meaning “slave”.

46. Title six-year-old of literature : ELOISE
Kay Thompson wrote the “Eloise” series of children’s books. Kay Thompson actually lived at the Plaza Hotel in New York, the setting she would choose for her “Eloise” stories. Eloise started out as a hit song for Thompson, a success that she parlayed into the book franchise.

49. Where to watch the Beeb : TELLY
“Telly” is a term commonly used in the UK that is short for “television”.

Skoal is a Swedish toast, with roots in the old Norse word “skaal” meaning “cup”.

54. “The 120 Days of Sodom” author : SADE
“The 120 Days of Sodom, or the School of Libertinism” is 1785 novel by the Marquis de Sade. Described variously as erotica and pornography, the novel wasn’t published for the first time until 1904, almost a century after the passing of the author. The book’s title is descriptive of the plot, in which four wealthy men seal themselves away for 120 days with a harem of 46 victims with the intent of experiencing ultimate sexual gratification.

56. Colombian crop : COCA
The coca plant is native to South America and is similar in appearance to a blackthorn bush. Coca leaves have been chewed by humans for centuries, perhaps even as far back as 3,000 years ago. Chewing the leaves apparently produces a pleasurable numb sensation in the mouth and a pleasant taste. The most famous alkaloid in the leaf is cocaine, but this wasn’t extracted in its pure form until the mid-1800s. The extracted cocaine was used in a medicines and tonics and other beverages.

58. Team on which Larry Bird played, on scoreboards : BOS
Larry Bird played basketball for the Boston Celtics from 1978 to 1992. Bird has a lot of very loyal fans, and some might even be described as fanatical. In 2005 an Oklahoma City man was convicted of a crime involving a shooting. On being sentenced to 30 years imprisonment, the guilty man requested that the sentence be changed to 33 years so that it matched the number on Larry Bird’s jersey. The judge obliged …