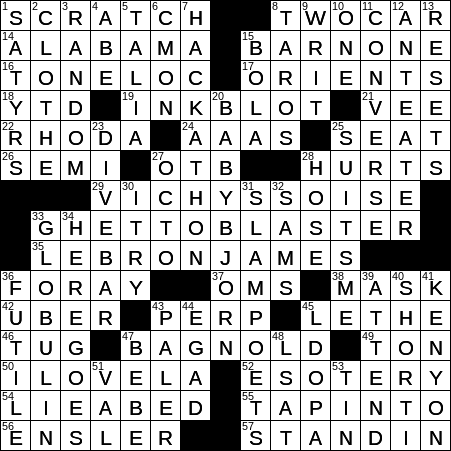 Today’s Wiki-est, Amazonian Googlies
Across
14. Where Forrest Gump played college football : ALABAMA
The epic 1994 movie “Forrest Gump” is based on a 1986 novel of the same name by Winston Groom. Groom said that he had envisioned John Goodman playing the title role, and not Tom Hanks.

19. Test pattern? : INKBLOT
The Rorschach test is a psychological test in which a subject is asked to interpret a series of inkblots. The test was created by Swiss Freudian psychoanalyst Hermann Rorschach in the 1920s.

21. Certain flight pattern : VEE
Apparently geese fly in a V-formation for a couple of reasons. One is that it makes for efficient flight and conserves energy. The leading bird gets no advantage, but every following bird gets to “slipstream” a little. It has been noted that the lead bird drops to the back of the formation when he/she gets fatigued. It’s also thought that the flock can stick together more easily when in formation, so it is more difficult to lose someone along the way.

22. 1970s TV spinoff : RHODA
The seventies sitcom “Rhoda” was a spinoff of “The Mary Tyler Moore Show” that starred Valerie Harper. The eighth episode of the show was an hour-long special in which Rhoda married her fiance Joe (played by David Groh). At the time of airing it was the second-most watched television episode in history, second only to the 1953 birth of Little Ricky on “I Love Lucy”.

24. Some mouse cells : AAAS
The first computer mouse was invented at the Stanford Research Institute in 1963, by one Douglas Engelbart. Sadly for him, his patent ran out before mice became standard equipment on computers, so he never made any money from his amazing invention.

27. Place to go when you’re not going to the races, for short? : OTB
Off-Track Betting (OTB) is the legal gambling that takes place on horse races outside of a race track. A betting parlor can be referred to as an OTB.

28. Joneses (for) : HURTS
Back in the late 60s, “Jones” was a slang term for an intense desire or an addiction. This usage probably came from an earlier meaning for “Jones” as a synonym for “heroin”. The etymology of the heroin meaning is very unclear.

29. Creamy chilled soup : VICHYSSOISE
Vichyssoise is a thick puréed potato soup that can be served hot, but is usually served cold. As well as potatoes, a classic vichyssoise contains leeks, onions, cream and chicken stock. Although the origin is disputed, it seems that the vichyssoise was invented in America, albeit by a French chef. That chef named his soup after the town of Vichy in France.

35. N.B.A. M.V.P. who has hosted “Saturday Night Live” : LEBRON JAMES
Basketball player LeBron James (nicknamed “King James”) seems to be in demand for the covers of magazines. James became the first African American man to adorn the front cover of “Vogue” in March 2008. That made him only the third male to make the “Vogue” cover, following Richard Gere and George Clooney.

37. New Agey sounds : OMS
“Om” is a sacred mystic word from the Hindu tradition. “Om” is sometimes used as a mantra, a focus for the mind in meditation.

New-Age music is created to provide a relaxing and stress-free atmosphere. The New Age movement is often said to have begun with the release of an album called “Spectrum Suite” by Steven Halpern in 1975.

42. “Everyone’s private driver” sloganeer : UBER
Uber is a ridesharing service that was founded in 2009 and is based in San Francisco. The service is somewhat controversial and has been described as an illegal taxicab operation. Central to Uber’s service is the company’s mobile app, which can use the client’s GPS location to help find the nearest available ride. Uber’s main competitor is Lyft. Personally, I love the service and have only had good experiences …

43. Kind of walk : PERP
When a crime suspect in the custody of the police is walked through a public place, often to and from a courthouse, it is known as a “perp walk”.

45. River of forgetfulness : LETHE
The Lethe is one of the five rivers of Hades in Greek mythology. All the souls who drank from the river Lethe experienced complete forgetfulness. The Greek word “lethe” means “oblivion, forgetfulness”.

47. “The Chalk Garden” playwright, 1955 : BAGNOLD
Enid Bagnold was a British author and is best known for her 1935 novel “National Velvet”, which was of course adapted into a very successful film starring Elizabeth Taylor.

50. 1983 hit song that mentions Santa Monica Boulevard : I LOVE LA
“I Love L.A.” is a song written and recorded by Randy Newman in 1983. The song is played at major sporting events in the city, after the home team scores or wins.

56. Playwright Eve : ENSLER
Eve Ensler is a playwright whose most famous work is “The Vagina Monologues”. When Ensler was only 23 years of age she adopted a 15 year old boy. We are familiar with that boy on the big screen these days: actor Dylan McDermott.

Down
1. Figures in ribald Greek plays : SATYRS
The satyrs of Greek mythology came with a very high sex drive. They are the “rude” male subjects drawn on the side of old Greek vases. The nubile maidens known as nymphs were often an object of attention for the satyrs.

4. Vigoda of “The Godfather” : ABE
Abe Vigoda played Detective Sergeant Phil Fish in television’s “Barney Miller” in the seventies, and even got his own spinoff show called “Fish”. On the big screen, Vigoda played Sal Tessio in “The Godfather” and Grandpa Ubriacco in “Look Who’s Talking”.

5. Shire of “The Godfather” : TALIA
The actress Talia Shire is best-known for playing Rocky’s wife Adrian in the “Rocky” series of movies. She also played Connie, the daughter of Don Corleone, in “The Godfather” films. Shire is the sister of movie director Francis Ford Coppola and the aunt of actor Nicolas Cage. Her son is the actor Jason Schwartzman.

7. Collaborative computer coding event : HACKATHON
A “hackathon” is an event in which software developers collaborate intensively on a project, usually for a day or a week. It is a “hack marathon”, with “hack” in this case being legal, explorative programming. Apparently, the first event described as a hackathon was held by ten American developers who met in Calgary to work on cryptographic software. Calgary was chosen so as to avoid US export regulations relating to software.

8. Plants sometimes used to make flour : TAROS
The corm of some taro plants is used to make poi, the traditional Hawaiian dish (that I think tastes horrible). When a taro plant is grown as an ornamental, it is often called Elephant Ears due to the shape of its large leaves.

9. Letter of the law? : WRIT
A writ is an order issued by some formal body (these days, usually a court) with the order being in written form. Warrants and subpoenas are examples of writs.

12. Creature that Dalí walked on a leash in public : ANTEATER
The artist Salvador Dalí liked to make a splash in public. He was known to walk an anteater on a lead around Paris. He also brought an anteater on stage to an interview on “The Dick Cavett Show” in 1970.

15. Weapon that’s thrown : BOLA
Bolas are heavy balls connected by cords that constitute a throwing weapon. Bolas are often used to capture animals by tripping them as they run. The weapon is usually associated with gauchos, the South American cowboys, although there is evidence that the Inca army used them in battle.

20. Swedish-based maker of infant carriers : BABYBJORN
Babybjörn is a Swedish company known for manufacturing and selling baby products, and is especially known for its baby carriers. The company was named for its founder Björn Jakobson.

23. Seedy place to drink : DIVE BAR
We’ve been using the word “dive” in American English for a run-down bar since the latter half of the 19th century. The term comes from the fact that disreputable taverns were usually located in basements, so one had to literally and figuratively dive into them.

30. Reply that’s a bit of a humblebrag : I TRY
The term “humblebrag”, meaning “self-deprecating boast”, was coined by Harris Wittels, a writer for the sitcom “Parks and Recreation”.

31. Contestants in a war of words? : SLAM POETS
A poetry slam is a competition in which poets read their own work (usually), with winners being chosen by members of audience. Apparently the first poetry slam took place in Chicago in 1984. Now there is a Nation Poetry Slam that takes place each year, with representatives from the US, Canada and France.

32. BJ’s competitor, informally : SAM’S
Sam’s Club is owned and operated by Walmart and is named after the company’s founder, Sam Walton.

BJ’s Wholesale Club is a membership-only warehouse club that operates mainly on the East Coast of the US. When BJ’s was founded in 1984, the president of the company was Mervyn Welch. Welch chose the name BJ’s from the initials of his daughter Beverly Jean Welch.

40. What it always starts with? : SHORT I
The word “it” starts with a short letter I.

41. College where Rutherford B. Hayes was valedictorian : KENYON
Kenyon College is a private school in Gambier, Ohio that was founded in 1824. The college was established largely with funds from English peers Lord Kenyon and Lord Gambier. The list of Kenyon graduates includes President Rutherford B. Hayes, actor Paul Newman, comedian Jonathan Winters and actress Allison Janney.

45. Component of the combo drug Sinemet : L-DOPA
The name of the drug L-3,4-DihydrOxyPhenylAlanine can be shortened, thankfully, to L-DOPA. Swedish scientist Arvid Carlsson won a Nobel Prize for showing that L-DOPA could be used to reduce the symptoms of Parkinson’s Syndrome.

47. Actress Daniels or Neuwirth : BEBE
Bebe Daniels was a singer, dancer and a prolific actress. Starting in the silent movie era, Daniels made over 230 films.

Bebe Neuwirth is a wonderful actress and dancer, very famous for portraying Dr. Lilith Sternin, the wife of Dr. Frasier Crane on “Cheers” and “Frasier”. Neuwirth is a fabulous dancer, having studied ballet at Juilliard. In more recent years she has had starring roles on Broadway, and in 2010 played opposite Nathan Lane in “The Addams Family”. Neuwirth also plays a leading role on the show “Madame Secretary”.

48. Practice exam? : LSAT
The Law School Admission Test (LSAT) has been around since 1948.

51. ___ d’Isère (French ski resort) : VAL
Val d’Isère is a noted ski resort in south-eastern France, lying just 3 miles from the Italian border. If you’ve ever watched the British sitcom “Absolutely Fabulous”, Edina and Patsy used to holiday in Val d’Isère whenever they got they chance.

53. Spam’s place : TIN
Spam is a precooked meat product that is sold in cans. It was introduced by Hormel Foods in 1937. The main meat ingredients are pork shoulder meat and ham. The name “Spam” was chosen as the result of a competition at Hormel, with the winner earning himself a hundred dollars. According to the company, the derivation of the name “Spam” is a secret known by only a few former executives, but the speculation is that it stands for “spiced ham” or “shoulders of pork and ham”.