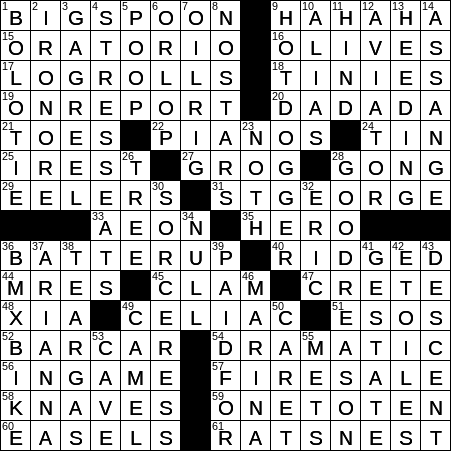 Today’s Wiki-est, Amazonian Googlies
Across
1. One of a pair of cuddlers : BIG SPOON
When two people cuddle in bed, “spooning”, the person in the back is referred to as the “big spoon”, and the person in front is the “little spoon”.

15. Handel bars : ORATORIO
An oratorio is a large musical work for orchestra, choir and solo singers, and usually has a religious theme. It is similar to an opera, but without the action, costume and scenery.

George Frideric Handel was the King of the Oratorio. Handel’s most famous oratorio is “Messiah”, which had its debut performance in Dublin, Ireland back in 1742.

17. Participates in quid pro quo : LOGROLLS
“Logrolling” is the name given to the exchange of favors, and more specifically the trading of votes in a legislature. The term comes from an old custom in which friendly neighbors would assist each other by rolling logs into a pile for later burning.

“Quid pro quo” is Latin for “something for something”, a swap.

18. Edward Gorey’s “The Gashlycrumb ___” : TINIES
The author Edward Gorey is a famous for writing illustrated books that feature pen-and-ink drawings. Gorey described his works as literary nonsense, a style made famous by Edward Lear and Lewis Carroll.

20. 1982 international chart-topper by Trio with a repetitive title : DA DA DA
“Da Da Da” is a quirky and infectious song by the band Trio that they released in 1982. It was Trio’s only hit outside of their native Germany.

21. Digits in flats, maybe : TOES
Flats are shoes that are not high-heeled.

24. About 92% of britannium : TIN
Britannia metal (also called “britannium”) is an alloy made from 92% tin, 6% antimony and 2% copper. Britannia metal is a type of pewter.

27. Tar liquid : GROG
Edward Vernon was a naval officer with the nickname “Old Grog”. In 1740, Vernon ordered that the daily ration of rum for his sailors should be watered down, in order to reduce discipline problems caused by drunkenness. The diluted rum was sweetened with sugar, and lemon or lime added to help preserve it on long voyages. This recipe, found to reduce scurvy among sailors (because of the citrus) spread throughout the Royal Navy, and “grog” was born.

A Jack Tar, or just “tar”, was a seaman in the days of the British Empire. The term probably arose due to a sailor’s various uses of tar back then, including waterproofing his clothes and using tar in his hair to slick down his ponytail.

29. Some workers along Chesapeake Bay : EELERS
An eeler is someone who fishes for eels, (also known as “sniggling”).

Chesapeake Bay is on the Atlantic coast and is surrounded by the states of Maryland and Virginia. Chesapeake Bay is the largest estuary in the whole country, with over 150 rivers and streams draining into it.

33. Very long span : AEON
Geological time is divided into a number of units of varying lengths. These are, starting from the largest:

35. Grinder : HERO
“Hero” is another name for a submarine sandwich. The hero originated in New York City in the 1800s among Italian immigrants who wanted an Italian sandwich that reminded them of home. The name “hero” was coined in the 1930s, supposedly by a food critic in the “New York Herald Tribune” when he wrote that “one had to be a hero” to finish the gigantic sandwich. Hero is a prevalent term to this day in New York City, reserved for a submarine sandwich with an Italian flavor.

The etymology of “grinder” as a sandwich is unknown, although the term does date back to 1954. It is speculated that eating the large sandwich requires a lot of chewing, and hence the name “grinder”.

44. G.I. portions : MRES
The Meal, Ready-to-Eat (MRE) comes in a lightweight package that’s easy to tote around. The MRE replaced the more cumbersome Meal, Combat, Individual (MCI) in 1981, a meal-in-a-can. In turn, the MCI had replaced the C-ration in 1958, a less sophisticated meal-in-a-can with a more limited choice.

45. Symbol of happiness : CLAM
Our phrase “happy as a clam” dates back to the mid-1600s. Back then it was a more lengthy expression: “happy as a clam in the mud at high tide”. The idea was that a clam would be happy in its muddy home at high tide, because no one from land could get to it and eat it.

47. Iraklion is its capital : CRETE
Heraklion (also “Iraklion”) is the largest city on the Greek island of Crete. Heraklion is situated near to the ruins of Knossos, which is deemed to be Europe’s oldest city.

58. Deceitful sorts : KNAVES
We’ve been using “knave” to mean a cad since about 1200, and as an alternative name for the jack in a deck of cards since the mid-1500s. “Knave” comes from the Old English word “cnafa”, a “boy, male servant”.

60. Three-footers : EASELS
The word “easel” comes from an old Dutch word meaning “donkey” would you believe? The idea is that an easel carries its load (an oil painting, say) just as a donkey would be made to carry a load.

Down
1. Western wear : BOLO TIE
I’ve never worn a bolo tie, and was surprised to discover that it is a relatively recent invention. The first bolo tie was apparently produced in Wickenburg, Arizona in the late 1940s by a silversmith. The bolo takes its name from the boleadora, an Argentine lariat.

2. Major export of Western Australia : IRON ORE
Iron ore comes in a number of different forms, like magnetite (the most magnetic of all minerals) and hematite (the most commonly exploited iron ore).

5. ___ deck : POOP
A poop deck is a deck located on the roof of the cabin at the stern of a ship. The term “poop” comes from the French “poupe” meaning “stern”.

Not too long ago we replaced the deck in our backyard, and now actually have two of them, one higher than the other. We’ve christened the lower of the two “the poop deck”. Darned dog …

6. ___ deck : ORLOP
The orlop is the lowest deck on the ship, the place where cables and ropes used to be stored. The name “orlop” comes from the Dutch word “overlopen” meaning “to run over”. The idea is that all these ropes “ran over” each other while in storage.

9. Showboat : HOTDOGGER
Although “hotdogging” is a term now used across all sports, it was primarily associated with skiing and described the performance of showy and risky stunts on the slopes.

10. Billy the Kid, e.g. : ALIAS
I’m guessing that Billy the Kid was of Irish stock as his family name was McCarty. Another indication of an Irish connection is that he also used the aliases, William Antrim, Henry Antrim, and Kid Antrim, as Antrim is one of the six counties of Northern Ireland.

14. Subject of the 2013 film “The Fifth Estate” : ASSANGE
Julian Assange founded WikiLeaks, the website that is notorious for publishing information provided by whistleblowers. Assange is currently in England and recently lost an appeal to avoid extradition to Sweden to face charges of sexual assault. Assange entered the Ecuadorian Embassy in London seeking political asylum in 2012. He was granted that asylum and now lives at the embassy.

23. Chris of CBS’s “The Good Wife” : NOTH
The actor Chris Noth is best known for his television roles. Noth played Detective Mike Logan on “Law & Order” and Big on “Sex and the City”. More recently, he played the “bad husband” on the excellent show “The Good Wife”.

“The Good Wife” is a legal drama showing on CBS starring Julianna Margulies as Alicia Florrick, a litigator who returns to practicing the law after spending 13 years as a stay-at-home mom. I binge-watched the show some time back and found it to be well-written, with a great cast and great acting …

36. Off-road racer : BMX BIKE
BMX stands for Bicycle Motocross. It’s the sport where folks on bicycles race around what is in effect a regular motocross track. Medals were awarded for BMX for the first time at the Beijing Olympics, with a Latvian winning for the men, and a Française winning for the women.

38. March interrupter, maybe : TEAR GAS
The technical name for tear gas is a lachrymatory agent, meaning that it causes tearing (“lacrima” is the Latin for “tear”).

41. Take to term : GESTATE
The normal gestation period for humans is 280 days, a little over 9 months. The gestation period can be a little shorter, or longer. Back in 1945, a pregnancy was confirmed at 375 days, just over a year.

43. Spelunker’s activity : DESCENT
Spelunking is an American term for caving, although the word has Latin roots (“spelunca” is the Latin for “cave”). The term originated in the 1940s in New England when it was adopted by a group of men who explored caves in the area.

49. Brand once advertised with the line “They never get on your nerves” : CAMEL
The advertising mascot for Camel cigarettes was officially known as “Old Joe”, but was popularly known as “Joe Camel”. Joe originated in the seventies, in an advertising campaign that ran only in Europe where sometimes he was depicted wearing a French Foreign Legion cap. He was imported to the US in 1988 on the occasion of the 75th anniversary of the Camel brand. The big controversy surrounding the use of the camel character was that a 1991 study found that 5-6 year old children could recognize Joe Camel more readily than either Mickey Mouse or Fred Flintstone. Also, soon after Old Joe was introduced in the US, the Camel brand’s share of the illegal market to underage smokers went up from 1% to just under 33%.

50. Addition sign : CARET
The character known as a caret was originally a proofreading mark, used to indicate where a punctuation mark was to be inserted. “Caret” is Latin for “it lacks”.

55. Subway Series squad : METS
The term “Subway Series” has been used to describe World Series baseball games when both participating teams are based in New York.