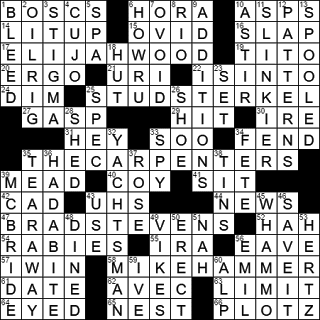 CROSSWORD SETTER: Brendan Emmett Quigley
THEME: The Carpenters
Today’s themed answers are names of celebrities, each of which includes a word associated with CARPENTRY:

17A. Player of Frodo in “The Lord of the Rings” : ELIJAH WOOD
25A. “The Good War” Pulitzer Prize winner : STUDS TERKEL
47A. Boston Celtics coach beginning in 2013 : BRAD STEVENS
58A. Detective whose first book was “I, the Jury” : MIKE HAMMER

Today’s Wiki-est, Amazonian Googlies
Across
1. Some pears : BOSCS
Bosc is a cultivar of the European Pear grown in the northwest of the United States. The Bosc is that pear with a skin the color of a potato, with a long neck. I always seem to use the potato as my point of reference. How Irish am I …?

6. Joyous wedding dance : HORA
The hora is a circle dance that originated in the Balkans. It was brought to Israel by Romanian settlers, and is often performed to traditional, Israeli folk songs. The hora (also horah) is a regular sight at Jewish weddings. Sometimes the honoree at an event is raised on a chair during the hora.

10. Lethal injection providers? : ASPS
The asp is a venomous snake found in the Nile region of Africa. It is so venomous that the asp was used in ancient Egypt and Greece as a means of execution. Cleopatra observed such executions noting that the venom brought on sleepiness without any painful spasms. When the great queen opted to commit suicide, the asp was therefore her chosen method.

14. Electrified, as a Christmas tree : LIT UP
The custom of decorating trees at Christmas seems to have originated in Renaissance Germany. Those first trees were placed in guildhalls and were decorated with sweets and candy for the apprentices and children. After the Protestant Reformation, the Christmas tree became an alternative in Protestant homes for the Roman Catholic Christmas cribs. The Christmas tree tradition was imported into Britain by the royal family because of its German heritage. That tradition spread from Britain into North America.

15. Poet who wrote “If you want to be loved, be lovable” : OVID
The Roman poet Publius Ovidius Naso is today known simply as Ovid. Ovid is usually listed alongside the two other great Roman poets: Horace and Virgil.

16. Many a hockey shot : SLAP
A slapshot in ice hockey involves slapping the ice just behind the puck with the stick, causing the stick to bend and store up extra energy. When the stick finally hits the puck, all that extra energy is released along with the energy from the swing resulting in the hardest shot in hockey.

21. New England state sch. : URI
The University of Rhode Island (URI) was first chartered as an agricultural school, back in 1888. URI’s main campus today is located in the village of Kingston.

25. “The Good War” Pulitzer Prize winner : STUDS TERKEL
Studs Terkel was an author, historian and broadcaster. Terkel won a Pulitzer in 1985 for his book “The Good War”, an oral history of WWII consisting of interviews he conducted with many ordinary people about their experiences during the conflict.

29. Runner-advancing action : HIT
That would be in baseball.

35. Pop group suggested by 17-, 25-, 47- and 58-Across : THE CARPENTERS
Karen Carpenter was an accomplished drummer, although she only started playing drums in high school, as a member of the school band. After she graduated she started playing jazz with her brother, Richard, and a college friend. Later, she and Richard played with a group called Spectrum, and submitted many demo tapes to recording companies, but all were unsuccessful. Finally, Karen and Richard got a recording contract with A&M Records, and when they had Karen take the lead on their songs, they hit the big time and toured as the Carpenters. Sadly, Karen passed away at only 32-years-old, dying from heart failure brought on by anorexia.

39. Renaissance Faire quaff : MEAD
Mead is a lovely drink, made from fermented honey and water.

42. Real heel : CAD
Our word “cad”, meaning “a person lacking in finer feelings”, is a shortening of the word “cadet”. “Cad” was first used for a servant, and then students at British universities used “cad” as a term for a boy from the local town. “Cad” took on its current meaning in the 1830s.

54. Worry after a raccoon attack : RABIES
“Rabies” is actually the Latin word for “madness”. The name is a good choice for the viral disease, as once the virus spreads to the brain the infected person or animal exhibits very tortured and bizarre behavior including hydrophobia, a fear of water. The virus is passed on to humans most often through a bite from an infected dog. It is curable if it is caught in time, basically before symptoms develop. Once the virus passes up the peripheral nervous system to the spine and the brain, there isn’t much that can be done.

58. Detective whose first book was “I, the Jury” : MIKE HAMMER
Mike Hammer is the protagonist in a series of private detective novels by Mickey Spillane. The novels have been adapted for radio, television and the big screen. The actor most associated with Mike Hammer is Stacy Keach, who played the role in the TV series “Mickey Spillane’s Mike Hammer” from 1984 to 1987.

“I, The Jury” is the first novel in the “Mike Hammer” series written by Mickey Spillane. The story was filmed twice, once in 1953 with Biff Elliot playing Hammer, and again in 1982 with Armand Assante taking the lead.

66. Collapse in frustration : PLOTZ
The verb “to plotz” is slang for “faint, collapse from surprise or exhaustion”.

Down
3. Bad mark : STIGMA
A stigma (plural “stigmata), in a social sense, is a distinguishing mark of disgrace. For example, one might have to suffer the stigma of being in prison. The term derives from the Greek “stigma”, which was a mark or brand.

4. 1981 thriller whose title character is a St. Bernard : CUJO
“Cujo” is a Stephen King horror novel, which means that I have never read it (I don’t do horror). The character Cujo is a rabid St. Bernard dog which besieges a young couple for three days in their stalled car. King tells us that he lifted the dog’s name from real life, as Cujo was the nickname of Willie Wolfe, one of the men responsible for the 1974 kidnapping of Patty Hearst by the Symbionese Liberation Army.

5. Where you might get rubbed the right way : SPA
The word “spa” migrated into English from Belgium, as Spa is the name of a municipality in the east of the country that is famous for its healing hot springs. The name “Spa” comes from the Walloon word “espa” meaning “spring, fountain”.

18. Hiking signal : HUT
The quarterback (QB) starts each play in football with a “snap” (also called a “hike”). He announces to his teammates the exact moment of the snap by calling out signals, usually including the word “hut” one or more times in a prearranged sequence.

25. Guideline for a freelancer, for short : SPEC
The term “free lance” was coined by Sir Walter Scott in his 1820 novel “Ivanhoe”, using it to describe a medieval mercenary warrior. Forty years later, a freelancer was a journalist who did work for more than one publication without a long-term commitment.

26. There might be a spat about this : SHOE
Spats are footwear accessories that cover the ankle and instep. Spats were primarily worn by men, and originally had the purpose of protecting shoes and socks from mud or rain. Eventually, spats became a feature in stylish dress. The term “spats” is a contraction of “spatterdashes”.

32. America’s Cup competitor : YACHTSMAN
The America’s Cup is a trophy that has been awarded for yacht racing since 1851. It was first presented to the winner of a race around the Isle of Wight in England that was won by a schooner called “America”. The trophy was eventually renamed to “the America’s Cup” in honor of that first race winner.

37. Tudor symbol : ROSE
The Wars of the Roses was a series of civil wars fought for the throne of England between the rival Houses of Lancaster and York. Ultimately the Lancastrians emerged victorious after Henry Tudor defeated King Richard III at the Battle of Bosworth Field. Henry was crowned King Henry VII, and so began the Tudor dynasty. Henry Tudor united the rival houses by marrying his cousin Elizabeth of York. Henry VII had a relatively long reign of 23 years that lasted until his death, after which his son succeeded to the throne as Henry VIII, continuing the relatively short-lived Tudor dynasty. Henry VIII ruled from 1509 until his death in 1547. Henry VIII was the last male to lead the the House of Tudor, as his daughter Queen Elizabeth I died without issue. When Elizabeth died, the Scottish King James VI succeeded to the throne as James I of England and Ireland. James I was the first English monarch of the House of Stuart.

39. Country singer Martina : MCBRIDE
Martina McBride is a country music singer and songwriter. She is sometimes known as the “Céline Dion of Country Music”, which means nothing to me!

49. Minnesota team, for short : VIKES
The Minnesota Vikings joined the NFL as an expansion team in 1960. Founded in Minnesota, the team’s name reflects the location’s reputation as a center of Scandinavian American culture.

53. Dollar alternative : HERTZ
The Hertz car rental company was started in 1918 by Walter L. Jacobs in Chicago. He began with just twelve model T Ford cars available for rent. In 1923, the car rental operation was bought out by John D. Hertz who incorporated it into his truck and coach manufacturing company.

56. Oscar winner Jannings : EMIL
Emil Jannings was an actor from Switzerland, who also held German and Austrian citizenship. Jannings was the first person to receive an Oscar, as the star of the 1928 silent movie called “The Last Command”. He also starred opposite Marlene Dietrich in the 1930 classic “The Blue Angel”.