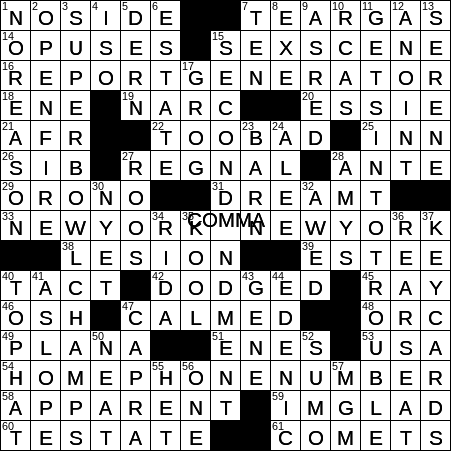 Today’s Wiki-est, Amazonian Googlies
Across
1. End of a match, in rugby : NO SIDE
“No side” is an obsolete term for the end of a rugby match. Nowadays, a match ends at “full time”.

14. Works in a conservatory? : OPUSES
The Latin for “work” is “opus”, with the plural being “opera”.

18. Liverpool-to-Leeds dir. : ENE
Liverpool is a large port city in the northwest of England, located on the estuary of the River Mersey. With a sense of humor that is typical of the area, people from Liverpool are often called “Liverpudlians”. The term comes from the jocular “Liver-puddle”, a diminutive of “Liver-pool”.

19. Deal breaker? : NARC
“Narc” is a slang term for a law enforcement officer who tracks down criminals associated with illegal drugs. “Narc” is short for “narcotics officer”.

21. It’s west of the Indian O. : AFR
The Carthaginian Republic was centered on the city of Carthage, the ruins of which are located on the coast of modern-day Tunisia. The Latin name for the people of Carthage was “Afri”. When the Romans took over Carthage, they created a province they called “Africa”. That name extended over time to the whole continent.

The Indian Ocean is the third largest of the world’s oceans, and was named for the country of India that forms much of its northern boundary.

Frank Sinatra recorded the album “Duets” in 1993 and “Duets II” in 1994. Both of these marvelous sets of recordings featured Sinatra performing with another celebrity singer. However, some folks felt “conned” as the duets didn’t involve Sinatra and the second artist singing together. Instead, the tracks were made using vocal parts pre-recorded by Sinatra.

38. Wound : LESION
A lesion is a wound or any abnormal tissue found in an organism. The word “lesion” comes from the Latin word “laesio” meaning “injury”.

40. “The art of making a point without making an enemy” : TACT
According to English polymath Sir Isaac Newton

Tact is the art of making a point without making an enemy.

46. Old city in Kyrgyzstan : OSH
Osh is the second largest city in the former Soviet Republic of Kyrgyzstan (after the capital Bishkek). Osh was a center of silk production and lies along the old Silk Road, the trade route that traversed Asia.

48. Literary terror : ORC
Orcs are mythical humanoid creatures that appear in the writings of J. R. R. Tolkien. Since Tolkien’s use of orcs, they have also been featured in other fantasy fiction and in fantasy games.

51. 6’11” Kanter of the N.B.A. : ENES
Enes Kanter is a professional basketball player who was born in Switzerland, although he is a Turkish national who was raised in Turkey. Kanter moved to the US in 2009 and has played basketball here since attending high school in Simi Valley, California.

53. Moscow Olympics boycotter : USA
The USA led a group of 65 countries in boycotting the 1980 Summer Olympic Games held in Moscow. The boycott was at the insistence of President Jimmy Carter, a response to the Soviet War in Afghanistan. The Soviet Union eventually retaliated, by leading a group of nations in boycotting the next Summer Olympics, held in 1984 in Los Angeles.

60. Acting willfully? : TESTATE
Someone who dies “intestate” does so without having made a will.

61. “Dirty snowballs,” to some astronomers : COMETS
Comets and asteroids are similar, both being relatively small celestial bodies orbiting the sun. Comets differ from asteroids in that they have a coma or tail, especially when they are close enough to the sun. The coma and tail are temporary fuzzy atmospheres that develop due to the presence of solar radiation. Comets are sometimes referred to as “dirty snowballs”, a reference to their composition: rock, dust, water ice and frozen gases.

Down
4. Prefix with -tonic : ISO-
“Isotonic” means “of equal tension” and is of Greek origin. There are two common uses of the term. Solutions of equal concentration are said to be isotonic. An isotonic solution of saline has the same amount of salt (NaCl) as there is in blood. Also, in the isotonic contraction of a muscle, the amount of tension stays the same whereas the muscle’s length changes. Lifting an object at a constant speed causes the isotonic contract of the lifting muscle.

6. ___ car (British station wagon) : ESTATE
The style of automobile that we call “station wagon” here in North America, is known as “estate car” in the British Isles. Both names are really references to the vehicle’s utility in hauling baggage in the extra space provided in the rear. A station wagon could haul bags to the station, and an estate car could haul bags to one’s country estate!

8. Application ending : EXE
In the Windows Operating System, a file with the extension .exe is an “executable” file.

12. Dub … or rub : ANOINT
Kneel, and the Queen might “dub thee a knight” if you’re lucky. “Dub” is a specific term derived from Old English that was used to mean “make a knight”. As the knight was also given a knightly name at the same time, “dub” has come to mean “give someone a name”.

15. Precept about idol worship : SECOND COMMANDMENT
In the Christian tradition, the second commandment prohibits the worship of “any graven image”. Usually this means that graven images can be created, but not worshipped.

17. Sea spirits : GROG
Edward Vernon was a naval officer with the nickname “Old Grog”. In 1740, Vernon ordered that the daily ration of rum for his sailors should be watered down, in order to reduce discipline problems caused by drunkenness. The diluted rum was sweetened with sugar, and lemon or lime added to help preserve it on long voyages. This recipe, found to reduce scurvy among sailors (because of the citrus) spread throughout the Royal Navy, and “grog” was born. As an aside, George Washington’s older half-brother named the famous Washington Mount Vernon Plantation in honor of Edward Vernon.

24. Protected, in a way : ALEE
“Alee” is the direction away from the wind. If a sailor points into the wind, he or she is pointing “aweather”.

27. Aussie critters : ROOS
The name “kangaroo” comes from the Australian Aborigine term for the animal. There’s an oft-quoted story that the explorer James Cook (later Captain Cook) asked a local native what was the name of this remarkable-looking animal, and the native responded with “kangaroo”. The story is that the native was actually saying “I don’t understand you”, but as cute as that tale is, it’s just an urban myth.

28. Grant and Adams : AMYS
Amy Grant is known as “The Queen of Christian Pop” and her most famous songs are Gospel and Contemporary Christian works. Grant recorded two songs that made it to number one in the commercial charts: “The Next Time I Fall” (1981, duet with Peter Cetera) and “Baby Baby” (1991).

34. Rap’s Flo ___ : RIDA
Tramar Dillard is better known as rapper Flo Rida. As you might have guessed, Flo Rida was born in the state of Florida.

35. Newport rival : KOOL
Kools cigarettes were introduced in 1933, and are still around today. The brand is marketed as being “smooth”, as the ingredient menthol numbs the mouth and dulls the taste of the tobacco.

Newport menthol cigarettes are the second best selling cigarette brand in the US, after Marlboros. The brand was named for Newport, Rhode Island. Newport is a seaport very much associated with sailing, hence the spinnaker sail logo on each box.

43. Code part : GENE
A gene is a section of a chromosome that is responsible for a particular characteristic in an organism. For example, one gene may determine eye color and another balding pattern. We have two copies of each gene, one from each of our parents, with each copy known as an allele.

47. Director of the first film to win all five top Oscars (Best Picture, Director, Actor, Actress and Screenplay) : CAPRA
I can’t tell you how many of Frank Capra’s movies are on my list of all-time favorites. He directed such classics as “It Happened One Night”, “Mr. Deeds Goes to Town”, “Lost Horizon”, “Mr. Smith Goes to Washington”, “Meet John Doe”, “Arsenic and Old Lace” and the holiday favorite “It’s a Wonderful Life”. Capra was the first person to win three directorial Oscars: for “It Happened One Night”, “Mr. Deeds Goes to Town” and “You Can’t Take It With You”. Capra also did his bit during WWII, enlisting just a few days after Pearl Harbor was attacked. Given his great talent, and the fact that he enlisted at the relatively advanced age of 44, the US Army put him to work directing 11 documentary war films in the “Why We Fight” series, for which he was awarded the Distinguished Service Medal.

“It Happened One Night” is a favorite film of mine, a 1934 romantic comedy starring Claudette Colbert and Clark Gable, and directed by Frank Capra. It was the first movie to win all five of the top Oscars. Only two other films have achieved that feat since then: “One Flew Over the Cuckoo’s Nest” (1975), and “The Silence of the Lambs” (1991). “It Happened One Night” has one of the sexiest scenes in movies (I think), where Claudette Colbert shows a little leg in order to hitch a ride for her and Gable.

52. Ring sport : SUMO
Sumo is a sport that is practiced professionally only in Japan, the country of its origin. There is an international federation of sumo wrestling now, and one of the organization’s aims is to have the sport accepted as an Olympic event.

57. ___ lion : MGM
There has been a lion in the logo of the MGM studio since 1924. The original was an Irishman (!), a lion named Slats who was born in Dublin Zoo in 1919. However, it wasn’t until Jackie took over from Slats in 1928 that the roar was heard, as the era of silent movies was coming to an end. The current lion is called Leo, and he has been around since 1957.