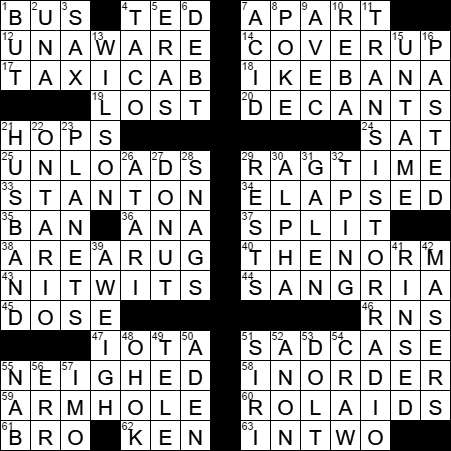 CROSSWORD SETTER: Joe Krozel
THEME: Separated Answers
Today’s grid is divided vertically down the center. Three of the rows in the grid contain themed answers. The themed answers are two-word phrases, but the words on the left of the divided line are “divided” into two separate answers. And, the word on the right of the divided line is a synonym of “divided”. Divided, divided, divided. Cool …

Today’s Wiki-est, Amazonian Googlies
Across
4. ___ Conference : TED
The acronym TED stands for Technology Entertainment and Design. TED is a set of conferences held around the world by a non-profit group called the Sapling Foundation. The conference subjects are varied, and the meetings are often led by big names such as Bill Clinton, Al Gore, Bill Gates and Jane Goodall. The Sapling Foundation then makes recordings of the conferences available for free online with the intent of disseminating the ideas globally. These conferences are known as “TED Talks”.

14. The scandal of Watergate, essentially : COVER-UP
The Watergate scandal is so named because it involved a break-in at the Democratic National Committee (DNC) headquarters in the Watergate office complex in Washington, D.C. The Watergate complex is made up of five units, three of which are apartment buildings, one an office building, and one a hotel-office building (which housed the DNC headquarters). Watergate led to the “-gate” suffix being used for many subsequent scandals, such as “Irangate”, “Bridgegate” and “Deflategate”.

17. Its distance is measured within a meter : TAXICAB
We call cabs “taxis”, a word derived from “taximeter cabs” that were introduced in London in 1907. A taximeter was an automated meter designed to record distance travelled and fare to be charged. The term “taximeter” evolved from “taxameter”, with “taxa” being Latin for “tax, charge”.

18. Japanese flower-arranging art : IKEBANA
The Japanese art of flower arranging is very much focused on minimalism, the use of a minimum number of blooms arranged among a few stalks and leaves.

21. Brewing need : HOPS
The foodstuff that we call “hops” are actually the female flower of the hop plant. The main use of hops is to add flavor to beer. The town in which I live here in California used to be home to the largest hop farm in the whole world. Most of the harvested hops were exported all the way to the breweries of London where they could fetch the best price.

24. Subject of some prep classes : SAT
Today the standardized test for admission to colleges is known as the SAT Reasoning Test, but it used to be called the Scholastic Aptitude Test and Scholastic Assessment Test, which led to the abbreviation SAT.

29. Some piano music : RAGTIME
Ragtime music was at the height of it popularity in the early 1900s. It takes its name from its characteristic “ragged” rhythms. The most famous ragtime composer was Scott Joplin, who had a big hit with his “Maple Leaf Rag” when it was published in 1899. He followed that up with a string of hits, including the “Pine Apple Rag” (sic). Ragtime fell out of favor about 1917 when the public turned to jazz. It had a resurgence in the forties when jazz musicians started to include ragtime tunes in their repertoires. But it was the 1973 movie “The Sting” that brought the true revival, as the hit soundtrack included numerous ragtime tunes by Scott Joplin, including the celebrated “The Entertainer” originally published in 1902.

33. Edwin M. ___, war secretary under Lincoln : STANTON
Edwin Stanton was Secretary of War in the administration of President Abraham Lincoln. In his role, Stanton had the daunting responsibility of organizing the North’s military resources during the Civil War. After President Lincoln was assassinated, Stanton took charge of the manhunt for the assassin and his accomplices.

36. Santa ___ : ANA
Santa Ana is the county seat of Orange County, California and takes its name from the Santa Ana River that runs through the city.

37. Word following 35-/36-Across, appropriately : SPLIT (giving “ban-ana split”)
The banana split was created in Latrobe, Pennsylvania in 1904. This particular sundae was the idea of David Stickler, a young apprentice pharmacist at the Tassel Pharmacy’s soda fountain.

44. Fruity libation : SANGRIA
Sangria is red wine punch, usually associated with Portugal and Spain. Recipes for sangria vary, but almost all include a robust red wine, sliced fruit, something sweet (e.g. orange juice, sugar), a spirit (e.g. brandy, triple sec), carbonated water or perhaps 7up, and ice. The drink is named for its color, as “sangre” is the Spanish for blood.

46. Ones attending to patients, for short : RNS
Registered nurses (RNs) might be found in an operating room (OR) or emergency room (ER).

47. Tiny bit : IOTA
Iota is the ninth letter in the Greek alphabet. We use the word “iota” to portray something very small as it is the smallest of all Greek letters.

60. Antacid brand : ROLAIDS
The Rolaids brand of antacid was invented in the late twenties. The “Rolaids” name came from the fact that original packing was a foil “roll”.

62. ___ doll : KEN
Barbie’s male counterpart doll is Ken, and Ken’s family name is Carson. Barbie’s full name is Barbie Millicent Roberts. When Ken was introduced in 1959, it was as Barbie’s boyfriend. In 2004 it was announced that Ken and Barbie were splitting up, and needed to spend quality time apart. Soon after the split, Barbie “met” Blaine, a boogie boarder from Australia.

Down
9. With, to Renoir : AVEC
Pierre-Auguste Renoir was a French painter, very much at the forefront of the Impressionist Movement. Renoir was a prolific artist, with several thousand works attributed to him. The largest collection of Renoirs is actually in the United States. You can see 181 of his paintings at the Barnes Foundation just outside Philadelphia.

10. Onetime CW sitcom : REBA
Reba McEntire is a country music singer and television actress. McEntire starred in her own sitcom called “Reba” that aired on the WB and the CW cable channels from 2001 to 2007.

22. Its postal codes start with K, L, M, N and P – but, oddly, not O : ONTARIO
The Canadian province of Ontario takes its name from the Great Lake. In turn, Lake Ontario’s name is thought to be derived from “Ontari:io”, a Huron word meaning “great lake”. Ontario is home to the nation’s capital of Ottawa as well as Toronto, Canada’s most populous city (and the capital of the province).

23. Well-known octet : PLANETS
There are several mnemonics used to remember the planets and the order in which they are found in the Solar System. One example is “My Very Easy Method Just Shows Us Nine Planets” which doesn’t really work since Pluto was relegated from “planethood”. The most oft-quoted mnemonic for the eight planets is “My Very Eager Mother Just Served Us Nachos”. Given the relegation of Pluto, I kind of like “Many Very Educated Men Just Screwed Up Nature”.

26. Old video game maker : ATARI
At one point, the electronics and video game manufacturer Atari was the fastest growing company in US history. However, Atari never really recovered from the video game industry crash of 1983.

31. Ancient physician : GALEN
Galen of Pergamum was a physician of Ancient Rome (of Greek ethnicity). He mainly worked on monkeys, dissecting their bodies to learn about physiology as it was not permitted to dissect human bodies in his day.

32. Pulling a prank outside a house : TP’ING
TP’ing (toilet papering) is a prank involving the covering of some object or location with rolls and rolls of toilet paper. If you live in Texas or Minnesota, that little “prank” is legal, but if you live here in California it is classed as mischief or vandalism.

39. Out of bed, in a way? : AWEIGH
When an anchor is “aweigh” or “atrip”, it is just clear of the bottom, having just been lifted.

42. Atomic clock components : MASERS
A MASER is a device that was around long before LASERs came into the public consciousness. A MASER (Microwave Amplification by Stimulated Emission of Radiation) is similar to a LASER, but microwaves are emitted rather than light waves.

50. Gulf of ___ (waters off the coast of Djibouti) : ADEN
Djibouti is a country in the Horn of Africa, located to the northwest of Somalia, with coasts on the Red Sea and the Gulf of Aden. Once known as French Somaliland, the country gained independence from France in 1977. The newly independent nation adopted the same name as Djibouti, the capital city.

51. Voice-activated assistant : SIRI
Siri is software application that works with Apple’s iOS operating system. “Siri” is an acronym standing for Speech Interpretation and Recognition Interface. You’ve probably seen the ads on television, with folks talking to their iPhones asking for information and responding with a voice. I hear that Google is a little scared by Siri, as Siri is non-visual. There’s no need to touch a screen or a keyboard to work with Siri, no opportunity to click on one of Google’s ads! By the way, voice-over artist Susan Bennett revealed herself as the female American voice of Siri not that long ago. The British version of Siri is called Daniel, and the Australian version is called Karen. Also, “Siri” is a Norwegian name meaning “beautiful woman who leads you to victory”, and was the name the developer had chosen for his first child.

54. Where annoying things stick : CRAW
“Craw” is another name for the “crop”, a portion of the alimentary tract of some animals, including birds. The crop is used for the storage of food prior to digestion. The crop allows the animal to eat large amounts and then digest that food with efficiency over an extended period. The expression “to stick in one’s craw” is used one when one cannot accept something, cannot “swallow” it.

56. Foozle : ERR
“To foozle” something is to bungle it, especially a shot at golf. The term derives from the German “fuseln” meaning “to bungle”.