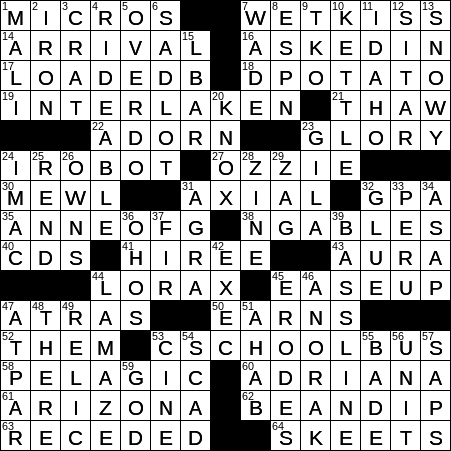 CROSSWORD SETTER: Timothy Polin
THEME: Bean Dip
Today’s themed answers include a type of BEAN, and that BEAN is spelled out by DIPPING into the row below the rest of the answer:

Today’s Wiki-est, Amazonian Googlies
Across
19. Swiss tourist destination : INTERLAKEN
Interlaken is town in the Swiss Alps that is a well-known tourist destination. It is situated between Lake Brienz to the east and Lake Thun to the west, and this position gives the town its name. The Latin “inter lacus” translates as “between the lakes”.

24. 2004 film about artificial intelligence : I, ROBOT
“I, Robot” is an interesting 2004 science fiction film starring Will Smith that is loosely based on the excellent collection of short stories of the same name by Isaac Asimov.

27. Football Hall-of-Famer Newsome : OZZIE
Ozzie Newsome is a former professional footballer who played his whole career with the Cleveland Browns. In fact, Newsome never missed one game in the whole of his 13-years with the NFL.

30. Cry feebly : MEWL
“To mewl” is to cry weakly like a baby, with the word being somewhat imitative.

44. Seussian environmentalist : LORAX
“The Lorax” is a children’s book written by Dr. Seuss. It is an allegorical work questioning the problems created by industrialization, and in particular its impact on the environment. At one point in the story, the Lorax “speaks for the trees, for the trees have no tongues”. “The Lorax” was adapted into an animated film that was released in 2012, with Danny DeVito voicing the title character.

47. Gillette razors : ATRAS
Fortunately for crossword constructors, the Atra razor was introduced by Gillette in 1977. The Atra was sold as the Contour in some markets and its derivative products are still around today.

52. Edutainment cartoon featuring a teacher named Ms. Frizzle : THE MAGIC SCHOOL BUS
“The Magic School Bus” is a children’s cartoon show that originally aired on PBS in the nineties. The show was based on a series of books of the same name by Joanna Cole and Bruce Degen.

58. Of the open sea : PELAGIC
Something described as “pelagic” lives in or is related to the open sea. The Greek word “pelagos” translates as “open sea, high sea”.

60. Supermodel Lima : ADRIANA
Adriana Lima is fashion model from Brazil. Lima is perhaps best known as one of the Victoria’s Secret Angels. Her modelling career started when she won a “Supermodel of Brazil” competition in 1996, at 15 years of age.

61. Cardinals’ home : ARIZONA
The Arizona Cardinals were founded in 1898 as the Chicago Cardinals. That makes the Cardinals the oldest, continuously-run professional football team in the whole country.

62. Nacho accompaniment … or a feature of 17-, 35- and 52-Across? : BEAN DIP
The dish known as “nachos” were supposedly created by the maître d’ at a restaurant called the Victory Club in the city of Piedras Negras, Coahuila, Mexico. The maître d’’s name was Ignacio “Nacho” Anaya.

Down
1. Neighbor of Burkina Faso : MALI
The Republic of Mali is a landlocked country in western Africa, south of Algeria. Formerly known as French Sudan, the nation’s most famous city is Timbuktu. Mali is the third-largest producer of gold on the continent, after South Africa and Ghana.

3. Suffix with klepto- : -CRAT
Kleptocrats are corrupt rulers who use their power to their own benefit, stealing resources from their realm and exploiting their people. The word “kleptocracy” comes from the related term “kleptomania”.

Kleptomania is the compulsion to steal, whether or not one is need of what is stolen. The term derives from the Greek word for “to steal”, “kleptein”, with the suffix “-mania”.

9. Fight stopper, for short : TKO
In boxing, a knockout (KO) is when one of the fighters can’t get up from the canvas within a specified time, usually 10 seconds. This can be due to fatigue, injury, or the participant may be truly “knocked out”. A referee, fighter or doctor may also decide to stop a fight without a physical knockout, especially if there is concern about a fighter’s safety. In this case the bout is said to end with a technical knockout (TKO).

11. About 45 miles of it touch Canada : IDAHO
The US state of Idaho has a panhandle that extends northwards between Washington and Montana, right up to the border with Canada. Across that border is the Canadian province of British Columbia. Most of Idaho is in the Mountain Time Zone, but Northern Idaho (the Panhandle) is in the Pacific Time Zone.

12. Stringed instrument usually played sitting down : SITAR
The sitar has been around since the Middle Ages. The sitar is a stringed instrument that is played by plucking, and is used most often in Hindustani classical music. In the West we have been exposed to the instrument largely through the performances of Ravi Shankar and some music by George Harrison of the Beatles, a onetime student of Shankar.

20. Kentucky’s Fort ___ : KNOX
Fort Knox is actually a US Army base, but it lends its name to the adjacent facility that is more correctly called the United States Bullion Depository. Most of the US gold reserves are in “Fort Knox”, although it isn’t the biggest gold repository in the US. That honor goes to the vault under the Federal Reserve Bank of New York in Manhattan. Most of the gold stored in the New York vault belongs to foreign nations and banks.

23. Sonoran Desert river : GILA
The Gila River is a tributary of the Colorado and flows through New Mexico and Arizona. From 1848 to 1853, the Gila marked part of the border between the US and Mexico.

24. Yosemite runner : IMAC
Apple introduced the OS X Operating System in 2000. Each version of this operating system has had a code name, and that code name until recently has been a type of big cat. The versions and code names are:

31. Home to a famous mausoleum : AGRA
The most famous mausoleum in the world has to be the Taj Mahal in Agra, India. The Taj Mahal was built after the death of the third wife of Shah Jahan, Mumtaz Mahal (hence the name of the mausoleum). The poor woman died in childbirth delivering the couple’s 14th child.

33. South American territory in the game Risk : PERU
Risk is a fabulous board game, first sold in France in 1957. Risk was invented by a very successful French director of short films called Albert Lamorisse. Lamorisse called his new game “La Conquête du Monde”, which translates into English as “The Conquest of the World”. A game of Risk is a must during the holidays in our house …

44. Labor day class? : LAMAZE
The Lamaze technique for childbirth was developed by a French obstetrician called Fernand Lamaze. He introduced the technique in the west after observing similar practices in the Soviet Union during a visit there in 1951.

46. Skimobiler’s wear : ANORAK
Anoraks aren’t very popular over here in America. Everyone has one in Ireland! An anorak is a heavy jacket with a hood, often lined with fur (or fake fur), and is an invention of the Inuit people.

47. How some bonds are sold : AT PAR
Stocks, and other financial vehicles, may be sold “at par”, meaning at the original price, neither discounted nor at a premium.

51. Fictional character who says “I’d strike the sun if it insulted me” : AHAB
Captain Ahab is the obsessed and far from friendly captain of the Pequod in Herman Melville’s “Moby-Dick”. The role of Captain Ahab was played by Gregory Peck in the 1956 John Huston film adaptation. Patrick Stewart played Ahab in a 1998 miniseries in which Peck made another appearance, as Father Mapple.

59. Quetzalcoatl, e.g. : GOD
The Aztec god Quetzalcoatl’s name means “feathered serpent”. He was worshiped as the god of wind and of learning.