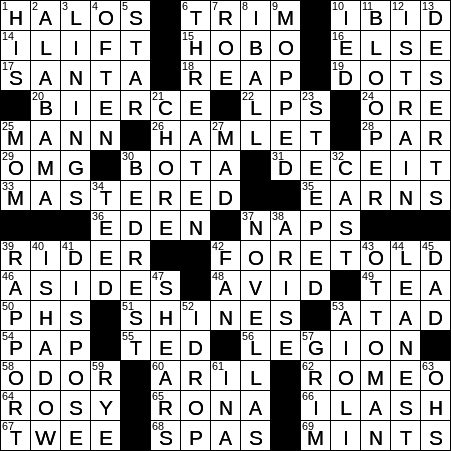 CROSSWORD SETTER: Molly Young
THEME: Products from Apple?
Today’s themed answers are written as if they are Apple products (i.e. iProduct), but sound like eye-related items:

Today’s Wiki-est, Amazonian Googlies
Across
10. Footnote abbr. : IBID
Ibid. is short for the Latin word “ibidem” and is typically found in footnotes and bibliographies. Ibid. is used to refer the reader to the prior citation, instead of giving the same information all over again (title, author etc.).

14. New push-up bra from Apple? : ILIFT (sounds like “eye lift”)
The word “brassière” is French in origin, but it isn’t the word the French use for a “bra”. In France, what we call a bra is known as a “soutien-gorge”, translating to “held under the neck”. The word “brassière” is indeed used in France but there it describes a baby’s undershirt, a lifebelt or a harness. “Brassière” comes from the Old French word for an “arm protector” in a military uniform (“bras” is the French for “arm”). Later “brassière” came to mean “breastplate” and from there the word was used for a type of woman’s corset. The word jumped into English around 1900.

15. ___ purse : HOBO
A hobo bag is rather unstructured-looking, a crescent-shaped bag with a long strap and soft sides that tends to slump when set down. It’s called a hobo bag because the shape resembles that of the bundle carried by archetypal hobos on the ends of sticks resting on their shoulders.

The Santa Clara Valley, just a few miles from me at the south of San Francisco Bay, is better known as “Silicon Valley”. The term “Silicon Valley” dates back to 1971 when it was apparently first used in a weekly trade newspaper called “Electronic News” in articles written by journalist Don Hoefler.

19. What Pac-Man eats : DOTS
The Pac-Man arcade game was first released in Japan in 1980, and is as popular today as it ever was. The game features characters that are maneuvered around the screen to eat up dots and earn points. The name comes from the Japanese folk hero “Paku”, known for his voracious appetite. The spin-off game called Ms. Pac-Man was released in 1981.

20. Ambrose who wrote “The Devil’s Dictionary” : BIERCE
Ambrose Bierce was, among other things, an American satirist. He wrote a satirical lexicon called “The Devil’s Dictionary” published in 1911. The book is still popular today, with an updated version released in 2009. It includes “new” definitions from Bierce that were not included in his original work. Roy Morris, Jr. wrote a biography about Bierce called “Ambrose Bierce: Alone in Bad Company”.

25. Thomas who wrote “Buddenbrooks” : MANN
Thomas Mann was a German novelist whose most famous work is probably his novella “Death in Venice”, originally published in German in 1912 as “Der Tod in Venedig”. The story was famously adapted for the big screen in 1971, in a movie starring Dirk Bogarde.

26. Great Dane? : HAMLET
The full title of William Shakespeare’s play that we tend to call “Hamlet” is “The Tragedy of Hamlet, Prince of Denmark”. It is the most performed of all Shakespeare’s plays and it is also his longest, the only one of his works comprising over 4,000 lines. That’s about a 4-hour sitting in a theater …

30. Leather bag for wine : BOTA
A bota bag is a traditional Spanish receptacle used to hold liquids. Also known as a wineskin, it is usually made of leather and carries wine.

31. Perfidy : DECEIT
“Perfidy” is a deliberate breach of trust. The term originated from the Latin phrase “per fidem decipere”, meaning “to deceive through trustingness”.

36. British P.M. between Churchill and Macmillan : EDEN
Sir Anthony Eden served as Britain’s Foreign Secretary during WWII, and then as Prime Minister from 1955-57. I think it’s fair to say that Eden doesn’t have a great reputation as a statesman. He was proud of his stance in favor of peace over war, so his critics characterized him as an appeaser. His major stumble on the world stage occurred with the Suez Crisis in 1956. Egypt’s President Nasser unilaterally nationalized the Suez Canal causing war to be declared on Egypt by Britain, France and Israel. Within a few months political pressure from the US and the USSR caused the allies to withdraw, bolstering Egypt’s national reputation. Eden never recovered from the loss of face at home, and it is felt that the stress even affected his health. Eden resigned in January 1957.

50. Acidity measures : PHS
As we all recall from chemistry class, a pH of 7 is considered neutral. Anything less than 7 is an acid, and anything above 7 is a base.

55. Kind of talk : TED
The acronym TED stands for Technology Entertainment and Design. TED is a set of conferences held around the world by a non-profit group called the Sapling Foundation. The conference subjects are varied, and the meetings are often led by big names such as Bill Clinton, Al Gore, Bill Gates and Jane Goodall. The Sapling Foundation then makes recordings of the conferences available for free online with the intent of disseminating the ideas globally. These conferences are known as “TED Talks”.

56. Numerous : LEGION
The word “legion” can be used to mean “a large number”.

60. Seed cover : ARIL
The casing surrounding many seeds is called the aril, and it may be quite fleshy. This fruit-like characteristic makes it desirable as a food and aids in the dispersion of the seeds.

65. Writer Jaffe : RONA
Rona Jaffe was an American novelist perhaps most famous for two of her books, “The Best of Everything” and “Mazes and Monsters”. “The Best of Everything” was published in 1958 and has been compared with the HBO television series “Sex and the City” as it depicts women in the working world. “Mazes and Monsters” was published in 1981 and explores a role-playing game similar to Dungeons & Dragons and the impact it has on players.

10. Iraq war danger, for short : IED
Having spent much of my life in the border areas between southern and Northern Ireland, sadly I am all too familiar with the devastating effects of Improvised Explosive Devices (IEDs). One has to admire the bravery of soldiers who spend their careers defusing (or attempting to defuse) such devices in order to save the lives and property of others.

12. New colander from Apple? : ISTRAIN (sounds like “eye strain”)
A colander is a bowl-shaped utensil with holes in it that is used for draining liquid from food. The term “colander” comes from the Latin word “colum” meaning “sieve”.

27. Magazine with a fold-in back cover : MAD
“Mad” magazine has been around since 1952, although back then it was more of a comic book than a magazine. The original founder and editor was Harvey Kurtzman and in order to convince him to stay, the publisher changed the format to a magazine in 1955. That’s when the publication really took off in terms of popularity.

37. Orwell’s “Animal Farm” and Kafka’s “The Metamorphosis,” for two : NOVELLAS
“Animal Farm” is a 1945 novella written by George Orwell, a satire of life in the Soviet Union under Joseph Stalin. Orwell had trouble getting his novel published in his homeland of the UK during WWII, as anti-Soviet literature wasn’t a good thing to publish while the UK and USSR were on the same side of a World War. In fact, one publisher who was willing to distribute the book changed his mind after being warned off by the British Ministry of Information. Given his experiences, I find it interesting that Orwell should write “Nineteen Eighty-Four” a few years later, and introduce the world to Big Brother.

“The Metamorphosis” is a famous novella by Franz Kafka, regarded by many as one of the greatest pieces of short fiction written in the 20th century. The story tells of the metamorphosis of Gregor Samsa into a gigantic insect. His sister, Grete Samsa, becomes his caregiver.

43. It can help you get a leg up : OTTOMAN
The piece of furniture known as an ottoman can be a couch, usually with a head but no back or sides. Here in the US, the term more usually applies to a padded and upholstered seat or bench that can also be used as a footrest. The original ottoman couch came from the Ottoman Empire, hence the name.

52. New parachute from Apple? : IDROP (sounds like “eye drop”)
The term “parachute” was coined by Frenchman François Blanchard, from “para-” meaning “defence against” and “chute” meaning “a fall”.

53. Garlicky mayonnaise : AIOLI
To the purist, especially in Provence in the South of France, the “home” of aioli, aioli is prepared just by grinding garlic with olive oil. However, other ingredients are often added to the mix, particularly egg yolks.