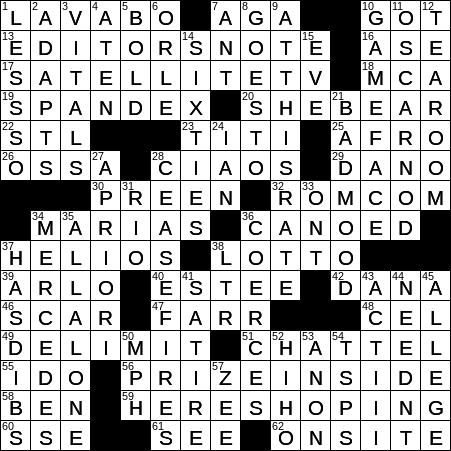 Today’s Wiki-est, Amazonian Googlies
Across
1. Ceremonial basin : LAVABO
A “lavabo” is a basin with water used for washing the hands, particularly for use in ceremonial rites.

16. Suffix with lip- : -ASE
Lipase is an enzyme that breaks down fat. Most human lipases are secreted by the pancreas.

19. Athletic wear named for an anagram of what it does : SPANDEX
What we call spandex in the US is known as Lycra in the British Isles. “Spandex” was chosen as the name for the elastic fiber as it is an anagram of “expands”.

22. Card initials : STL
The St. Louis Cardinals were originally called the “Brown Stockings”, changing their name to the “Perfectos” in 1899. That obviously didn’t go down well with the locals, as the owners changed it one year later to the Cardinals.

23. Monkey with a repetitive name : TITI
Titis are monkeys found in much of South America. Totis have tails that are a little bit longer than the length of their heads and bodies.

26. “Odyssey” peak : OSSA
Mount Ossa in Greece is located between Mt. Pelion in the south, and the famed Mt. Olympus in the north. Mount Ossa is also known as Kissavos.

“The Odyssey” is one of two epic poems from ancient Greece that is attributed to Homer. “The Odyssey” is largely a sequel to Homer’s other epic, “The Iliad”. “The Odyssey” centers on the heroic figure Odysseus, and his adventures on his journey home to Greece following the fall of Troy. We now use the term “odyssey” to describe any long series of adventures.

28. Parting words : CIAOS
“Ciao” is the Italian for “‘bye”. “Arrivederci” is more formal, and translates as “goodbye”.

29. Paul of “There Will Be Blood” : DANO
Paul Dano is an actor and musician from New York City. I best know him for playing Brian Wilson in “Love & Mercy”, a fascinating film about the Beach Boys.

32. “Annie Hall” or “Notting Hill” : ROMCOM
I suppose if there is any Woody Allen movie that I enjoy watching, it’s “Annie Hall” from 1977. I think Diane Keaton is a great actress and she is wonderful in this film. You’ll see Paul Simon as well, making a rare movie appearance, and even Truman Capote playing himself. The film is also famous for sparking a movement in the fashion world to adopt the “Annie Hall” look, that very distinctive appearance championed by Diane Keaton as the Annie Hall character.

Maria Sharapova is professional tennis player from the town of Nyagan in the Russian Federation. She is a former World No. 1.

36. Sat in a dugout? : CANOED
The boat called a canoe takes its name from the Carib word “kenu” meaning “dugout”. It was Christopher Columbus who brought “kenu” into Spanish as “canoa”, which evolved into our English “canoe”.

38. Ball game : LOTTO
Originally “Lotto” was a type of card game, with “lotto” being the Italian for “a lot”. We’ve used “lotto” to mean a gambling game since the late 1700s.

47. “M*A*S*H” co-star : FARR
Actor Jamie Farr is best known for playing the cross-dressing Max Klinger in the sitcom ”M*A*S*H”. Although Farr landed a role in the 1955 movie “Blackboard Jungle”, his career didn’t really take off until he started appearing regularly on “The Red Skelton Show”. Years later he managed to get a one-episode appearance in ”M*A*S*H”, and his character and performance were received so well that he became a regular on the show. Farr actually did serve in the US Army in Korea, although it was after hostilities had ended. The dog tags that Farr wore when filming ”M*A*S*H” were the one’s he actually wore while serving in the military.

48. Picture frame? : CEL
In the world of animation, a cel is a transparent sheet on which objects and characters are drawn. In the first half of the 20th century the sheet was actually made of celluloid, giving the “cel” its name.

56. Cracker Jack come-on : PRIZE INSIDE
Cracker Jack snack food was introduced to the public at the 1893 Chicago World Fair. It didn’t get the name “Cracker Jack” until a few years later when someone declared to the producers that the candied snack was “crackerjack!”. Prizes were introduced into each box starting in 1912. The list of toy surprises included rings, plastic figurines, temporary tattoos and decoder rings.

58. Jerry’s partner : BEN
Ben Cohen and Jerry Greenfield did a correspondence course on ice-cream making in 1977 given by Pennsylvania State University’s Creamery. The following year they opened an ice cream parlor in an old gas station in Burlington, Vermont. Today Ben & Jerry’s has locations in over 20 countries around the world, and theirs was the first brand ice-cream to go into space.

61. Verb that can combine with its past tense : SEE
The past tense of “see” is “saw”, and the pair can make “seesaw”.

Down
6. Heraldic wreath : ORLE
In heraldry, an orle is a decorative band that lies close to the edge of the front-surface of a shield. With such a design, the orle necessarily takes on the shape of the shield.

7. Only creature besides humans to farm other creatures : ANT
Amazon ants are referred to as “slave-raiding” ants. They rob the pupae from related species and use the captured ants as “slaves”. The “slaves” do virtually all the work needed to maintain the Amazon ant nest, including provision of food and nursing the young.

Duran Duran is a New Wave band from Birmingham in England. Duran Duran’s success was partially driven by some well-received MTV music videos in the 1980s. The band also worked hard on their image and paid a lot of money for very fashionable clothes in which they performed. As a result, one of Duran Duran’s nicknames is “the prettiest boys in rock”.

33. It borders Hudson Bay: Abbr. : ONT
The Canadian province of Ontario takes its name from the Great Lake. In turn, Lake Ontario’s name is thought to be derived from “Ontari:io”, a Huron word meaning “great lake”. Ontario is home to the nation’s capital of Ottawa as well as Toronto, Canada’s most populous city (and the capital of the province).

Hudson Bay in northern Canada is the second largest bay in the world, after the Bay of Bengal. Hudson Bay was named by English explorers after Henry Hudson who explored the area in 1610 on his ship “Discovery”. Hudson’s crew mutinied during that voyage and set Hudson and his officers adrift in a small boat. It is presumed that the castaways didn’t survive for very long.

37. Claims, with “on” : HAS DIBS
The phrase “to have dibs on” expresses a claim on something. Apparently, the term “dibs” is a contraction of “dibstone”, which was a knucklebone or jack used in a children’s game.

38. Xerox setting: Abbr. : LTR
Our paper sizes here in North America don’t conform with the standards in the rest of the world. ISO standard sizes used elsewhere were chosen so that the ratio of width to length is usually one to the square root of two. This mathematical relationship means that when you cut a piece of paper in two each half preserves the aspect ratio of the original, which can be useful in making reduced or enlarged copies of documents. Our standard size of “letter” (ltr., 8.5 x 11 inches) was determined in 1980 by the Reagan administration to be the official paper size for the US government. Prior to this, the “legal” size (8.5 x 14 inches) had been the standard, since 1921.

41. “Dr. Strangelove” or “Borat” : SATIRE
“Dr. Strangelove” is a black comedy directed and produced by Stanley Kubrick, released in 1964. The big star in the film is the great Peter Sellers, who plays three key roles. The full name of the movie is “Dr. Strangelove or: How I learned to Stop Worrying and Love the Bomb”.

The full name of the 2006 “mockumentary” is “Borat: Cultural Learnings of America for Make Benefit Glorious Nation of Kazakhstan”. Borat is played by a British comedian, Sacha Baron Cohen. Not my cup of tea …

43. When Banquo dies in “Macbeth” : ACT III
Banquo is a character in William Shakespeare’s “Macbeth”. Banquo is the thane of the Scottish province of Lochaber. Macbeth has him murdered, only to have Banquo’s ghost return and haunt him.

53. Shortly : ANON
“Anon” originally meant “at once” and evolved into today’s meaning of “soon” apparently just because the word was misused over time.