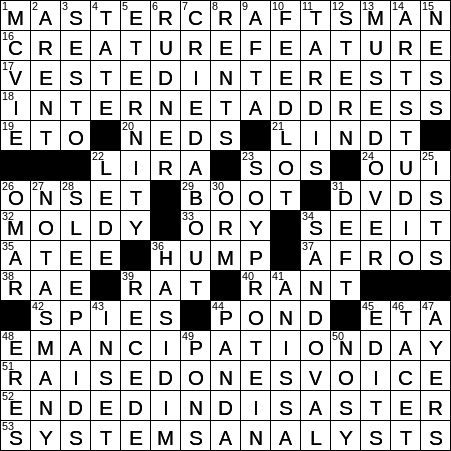 Today’s Wiki-est, Amazonian Googlies
Across
16. “Them!” or “The Fly” : CREATURE FEATURE
“Them!” is a 1954 science fiction movie about giant ants attacking humans after receiving a dose of nuclear radiation in the New Mexico desert. “Them!” was the first of a whole host of “giant bug” films, of which I think I’ve seen … none …

The 1986 sci-fi horror film “The Fly” stars Jeff Goldblum as a scientist who gradually turns into a fly-like creature as the result of a teleportation experiment that goes awry. The 1986 film is loosely based on a 1957 short story by George Langelaan. I saw the original 1958 movie adaptation of that story when I was just a lad, and it really scared me. I’ve avoided the two sequels and the 1986 remake …

19. Where many saw action in the ’40s : ETO
General Dwight D. Eisenhower (DDE) was in command of the European Theater of Operations (ETO) during WWII.

21. Swiss chocolate brand : LINDT
The delicious Swiss chocolate sold under the Lindt brand name has its origins in a small confectionery store in Zurich in the 1840s. Lindt purchased our local chocolate company here in San Francisco (Ghirardelli) back in 1998.

22. Currency replaced by the euro : LIRA
The word “lira” is used in a number of countries for currency. “Lira” comes from the Latin for “pound” and is derived from a British pound sterling, the value of a Troy pound of silver. For example, the lira (plural “lire”) was the official currency of Italy before the country changed over to the euro in 2002.

23. Message that might be spelled with rocks : SOS
The combination of three dots – three dashes – three dots, is a Morse signal first introduced by the German government as a standard distress call in 1905. The sequence is remembered as the letters SOS (three dots – pause – three dashes – pause – three dots), although in the emergency signal there is no pause between the dots and dashes, so SOS is in effect only a mnemonic. Similarly, the phrases “Save Our Souls” and “Save Our Ship” are also mnemonics, introduced after the “SOS” signal was adopted.

29. Start up, in a way : BOOT
The verb “to boot” as used in the world of computers comes from the phrase “pull oneself up by one’s bootstraps”. The idea is that the software that has to be loaded before a computer can do anything useful is called a “bootstrap load”.

36. Distinctive part of a bison : HUMP
There two species of bison left (four species are extinct). We are most familiar with the American bison (commonly called the American buffalo), but there is a also a European bison, sometimes called a “wisent”.

40. Bit of blogorrhea : RANT
I suppose some might say that I suffer from “blogorrhea”, a term used for excessive and compulsive blogging. That said, the term usually applies to posts with very little structure, just a continuous flow of thoughts. “Blogorrhea” is a portmanteau of “blog” and “logorrhea”, with the latter term describing an excessive and uncontrollable flow of words. “Logorrhea” dates back to the mid-1800s, and combines “logo-”, meaning speech, with the ending of the word “diarrhea”.

44. Giverny backdrop for Monet : POND
Giverny is a commune in northern France, most famous as the location of artist Claude Monet’s home. It was in Giverny that Monet produced his famous “Water Lilies” series of paintings.

45. You may give it when you are running late for a meeting, informally : ETA
Expected time of arrival (ETA)

48. Juneteenth : EMANCIPATION DAY
“Juneteenth” is a holiday celebrated on June 19th every year, a commemoration of the emancipation of slaves throughout the Confederate South. President Abraham Lincoln’s executive order known as the Emancipation Proclamation came into effect on January 1st, 1863 but it only applied to Confederate State that were not in Union hands. The order freeing the last slaves in the US was issued at the end of the Civil War, on June 19th 1865. That order applied specifically to the State of Texas. Over a decade later, in 1980, Texas became the first state to declare June 19th (“Juneteenth”) a state holiday.

53. Some STEM jobs : SYSTEMS ANALYSTS
The acronym STEM stands for the disciplines of science, technology, engineering and mathematics. An alternative acronym with a similar meaning is MINT, standing for mathematics, information sciences, natural sciences and technology.

Down
1. John or Christine of Fleetwood Mac : MCVIE
Fleetwood Mac was founded in 1967 in London. The band was started by Peter Green, and he chose the name from two friends in former bands (named Fleetwood and McVie). This is despite the fact the drummer’s name happens to be Mick Fleetwood.

4. London tourist destination, with “the” : TATE
The museum known as “the Tate” is actually made up of four separate galleries in England. The original Tate gallery was founded by Sir Henry Tate as the National Gallery of British Art. It is located on Millbank in London, on the site of the old Millbank Prison, and is now called Tate Britain. There is also the Tate Liverpool in the north of England located in an old warehouse, and the Tate St. Ives in the west country located in an old gas works. My favorite of the Tate galleries is the Tate Modern which lies on the banks of the Thames in London. It’s a beautiful building, a converted power station that you have to see to believe.

9. Skin Bracer alternative : AFTA
Afta is an aftershave in the Mennen range of products that is owned by Colgate-Palmolive.

11. Time machine on “Doctor Who” : TARDIS
“Dr Who” is an iconic sci-fi television series that is made in the UK by the BBC. First broadcast in 1963, the show is still running today, making it the longest running sci-fi television show in the world. Dr. Who is a time traveler,from the planet Gallifrey, who “regenerates” from time to time (pun!) so that a new actor fits seamlessly into the storyline. He travels in his famous TARDIS spacecraft. Outwardly, the TARDIS looks like a police call box from the 1950s, but inside it is an enormous, multi-roomed time machine. TARDIS is an acronym standing for Time And Relative Dimensions In Space.

15. Noted Volstead Act enforcer : NESS
Eliot Ness was the Treasury agent charged with the task of bringing down the notorious Chicago gangster Al Capone. When Ness took on the job in 1930, Chicago law-enforcement agents were renowned for being corrupt, for being on the take. Ness handpicked 50 prohibition agents who he thought he could rely on, later reducing the group to a cadre of 15 and ultimately just 11 trusted men. That group of 11 earned the nickname “The Untouchables”, the agents who couldn’t be bought.

22. Start of a news story, in journalism lingo : LEDE
The opening paragraph in any work of literature is often just called “the lead”. In the world of journalism, this is usually referred to as “the lede”.

26. ___ Little, stickup man on “The Wire” : OMAR
I didn’t watch the HBO series called “The Wire” when it first aired. We ending up buying all five series on DVD and we watched the whole thing a few years ago. It’s is a great drama series, and I thoroughly recommend it. Personally, I think that HBO produces some of the best dramas on American television.

34. Pablo ___, 2012 World Series M.V.P. nicknamed “The 44-Down” : SANDOVAL
Pablo Sandoval is a Major League third baseman from Venezuela. Sandoval has the cute and cuddly nickname “Kung Fu Panda”, a nickname given to him by teammate Barry Zito when they played together for the San Francisco Giants.

36. Orthodox group : HASIDIM
The Hasidic Jewish movement was founded in the 18th century by Baal Shem Tov, a mystical rabbi from Eastern Europe.

41. Child actress Jones of “Family Affair” : ANISSA
Anissa Jones was a child actress best-known for playing Buffy on the sixties sitcom “Family Affair”. Jones had a troubled life in her teens, especially after her parents divorced and then engaged in a drawn-out battle for custody of Anissa and her younger brother. Anissa died from a severe drug overdose when she was 18-years-old, and just a few years later, Anissa’s brother suffered the same fate.

46. “It is silent,” musically : TACET
“Tacet” is a musical direction meaning “be silent”. It is typically written on a score to instruct a particular voice or instrument to remain silent for a whole movement. “Tacet” is Latin for “it is silent”.