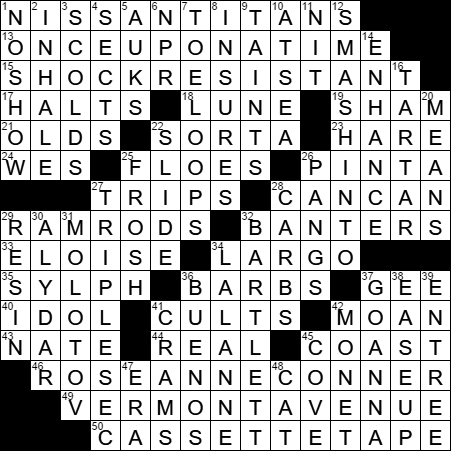 Today’s Wiki-est, Amazonian Googlies
Across
1. Pickup trucks from a foreign-owned company made and sold only in North America : NISSAN TITANS
The Titan is a pickup truck manufactured in the US by Nissan for the North American market. The first Nissan Titans rolled off the production line in 2003.

13. Familiar story line : ONCE UPON A TIME
The stock phrase “Once upon a time” has been used in various forms as the start of a narrative at least since 1380. The stock phrase at the end of stories such as folktales is often “and they all lived happily ever after”. The earlier version of this ending was “happily until their deaths”.

18. Moon, in Montreuil : LUNE
Montreuil is a commune located just a few miles from the center of Paris.

19. Imitation : SHAM
A “sham” is something that is imitation, fake. In the world of bed linens a sham is also imitation and fake, in the sense that it is a decorative cover designed to cover up a regular pillow used for sleeping.

21. Ford contemporary : OLDS
The REO Motor Company was founded by Ransom Eli Olds (hence the name REO). The company made cars, trucks and buses, and was in business from 1905 to 1975 in Lansing, Michigan. Among the company’s most famous models were the REO Royale and the REO Flying Cloud.

23. Jugged ___ (old British delicacy) : HARE
Jugged hare is a traditional dish made by stewing a whole hare in a tall jug placed in hot water. The hare’s blood is added to the dish at the end of the cooking process, along with port wine. Yuck …

25. White sheets : FLOES
An ice floe is a sheet of ice that has separated from an ice field and is floating freely on the ocean.

26. Second part of a historic trio : PINTA
Famously, Christopher Columbus used three ships in his first voyage across the Atlantic: the Santa Maria, the Niña and the Pinta. The Pinta was the fastest of the three, and it was from the Pinta that the New World was first spotted, by a sailor called Rodrigo de Triana who was a lookout on the fateful day. Pinta was a nickname for the ship that translated as “the painted one”. The Pinta’s real name has been lost in mists of time.

27. Some prizes on “The Price Is Right” : TRIPS
“The Price is Right” is a television game show that first aired way back in 1956.

28. Dance with high kicks : CAN-CAN
The Moulin Rouge cabaret is located right in the middle of one of the red light districts of Paris, the district of Pigalle. You can’t miss the Moulin Rouge as it has a huge red windmill on its roof (“moulin rouge” is French for “red windmill”). The nightclub opened its doors in 1889 and soon after, the working girls of the cabaret adopted a “respectable” party dance and used it to entice their clients. That was the birth of the can-can. Nowadays, the Moulin Rouge is home to a lavish, Las Vegas-style show that costs millions of euros to stage. It features showgirls, dancers and acrobats, a whole host of entertainers in fact. And I am sure the can-can features as well …

29. They’re put in barrels : RAMRODS
A ramrod is a “stick” that is inserted into the barrel of an older firearm in order to pack the bullet or ball tightly against the charge of gunpowder. A ramrod can also be used to push a cleaning rag through the barrel of a gun.

33. “___ in Moscow” (1959 children’s book) : ELOISE
Kay Thompson wrote the “Eloise” series of children’s books. Kay Thompson actually lived at the Plaza Hotel in New York, the setting she would choose for her “Eloise” stories. Eloise started out as a hit song for Thompson, a success that she parlayed into the book franchise.

34. Funereal tempo : LARGO
Largo is a instruction to play a piece of music with a very slow tempo. “Largo” is the Italian word for “broadly”.

35. Air spirit, in folklore : SYLPH
A sylph (also “sylphid”) is a mythological creature, an invisible and wispy being of the air. We also use the term “sylph” to describe a slender and graceful woman.

37. “Golly Gosh Oh ___” (Conway Twitty song) : GEE
Conway Twitty was a country singer who crossed over to the rock and roll and pop genres. Twitty’s real name was Harold Lloyd Jenkins, and he was named for the silent movie actor Harold Lloyd. There doesn’t seem to be a definitive explanation for how Twitty chose his stage name, but one suggestion is that he combined the names of the cities of Conway, Arkansas and Twitty, Texas.

43. ___ Parker, director and star of 2016’s “The Birth of a Nation” : NATE
Nate Parker is a an actor and director from Norfolk, Virginia. Parker directed, co-wrote and stars in the 2016 film “Birth of a Nation”, which is about the life of Nat Turner. “Birth of a Nation” premiered at the Sundance Film Festival and was picked up by Fox Searchlight for $17.5 million, a record deal for Sundance.

46. Sitcom mom whose kids were named Becky, Darlene and D.J. : ROSEANNE CONNER
The comedian Roseanne Barr is perhaps best known as the star of her own sitcom called “Roseanne” in which she played the character Roseanne Conner. In 2012 Barr unsuccessfully vied for the Green Party’s nomination for US President. She didn’t give up though, and was successful in winning the nomination of the Peace and Freedom Party. In the 2012 presidential election she earned over 60,000 votes, and placed sixth in the list of candidates.

49. $100 purchase in Monopoly : VERMONT AVENUE
The street names in the US version of Monopoly are locations in or around Atlantic City, New Jersey.

6. “This is ___” : NPR
National Public Radio (now just called NPR) was launched in 1970 after President Johnson signed into law the Public Broadcasting Act of 1967. The intent of the act was to provide funding for radio and television broadcasting that wasn’t simply driven by profit. As a longtime fan of the state-funded BBC in the UK, I’d have to agree with that intent …

11. Small carp : NIT
The word “carp” used to mean simply “talk” back in the 13th century, with its roots in the Old Norwegian “karpa” meaning “to brag”. A century later the Latin word “carpere” meaning “to slander” influenced the use of “carp” so that it came to mean “find fault with”.

16. Winemaking byproduct : TARTAR
The crystals that can sometimes precipitate out of wine stored in bottles are potassium bitartrate. The same chemical can be used in cooking, when it is referred to as cream of tartar.

22. Go down toward home? : SLIDE
That would be in baseball.

25. Campus newbie : FROSH
“Frosh” is a slang term for a college freshman. We call them “freshers” back in Ireland …

27. Liqueur in a margarita : TRIPLE SEC
Triple sec is liqueur made from the dried peels of bitter and sweet oranges. I tend to use it in cocktails calling for Grand Marnier or Cointreau, as it is a cheaper alternative and tastes very similar …

31. Protégé of Stalin : MOLOTOV
Vyacheslav Molotov was a prominent Soviet politician and protégé of Joseph Stalin. During the Winter War of WWII, between the Soviet Union and Finland, Molotov claimed in radio broadcasts that Finland was not being bombed, but rather that the Soviet Union was dropping food to relieve famine. With a sense of irony, the Finns started to call the Soviet bombs “Molotov bread baskets”. The Finns also improvised incendiary bombs using bottles and a gasoline-based fuel, and called these devices “Molotov cocktails”, a name that persists to this day.

32. Compiler of an 1855 reference work : BARTLETT
“Bartlett’s Familiar Quotations” is a popular reference work containing tons of quotations. Bartlett’s was first issued in 1855, and as such is the longest-lived collection of quotations that we have available to us. The book started as a private list of quotes gathered by John Bartlett who ran the University Bookstore in Cambridge, Massachusetts. He kept the list as he was always being asked “who said?” by customers.

34. “The Jack ___ Show,” 1959-85 : LALANNE
Jack LaLanne was a pioneer in the field of fitness and nutrition and was sometimes called “the godfather of fitness”. LaLanne was also a bodybuilder and actually beat 21-year-old Arnold Schwarzenegger in competition, when LaLanne was 54-years-old …

36. Start of a Spanish greeting : BUENOS …
“Buenos dias” translates from Spanish as “good day”, but can also be used to say “good morning”.

37. Australian monitor lizard : GOANNA
Monitor lizards are so called because they tend to stand up on their hind legs and “monitor” their surroundings.

39. Starter follower : ENTREE
Entrée means “entry” in French. An entrée can be something that helps one get “a way in”, an interview for example perhaps helped along by a recommendation letter. In Europe, even in English-speaking countries, the entrée is the name for the “entry” to the meal, the first course. I found it very confusing to order meals when I first came to America!

42. His house in Giverny is a now a museum : MONET
Giverny is a commune in northern France, most famous as the location of artist Claude Monet’s home. It was in Giverny that Monet painted his famous “Water Lilies”.