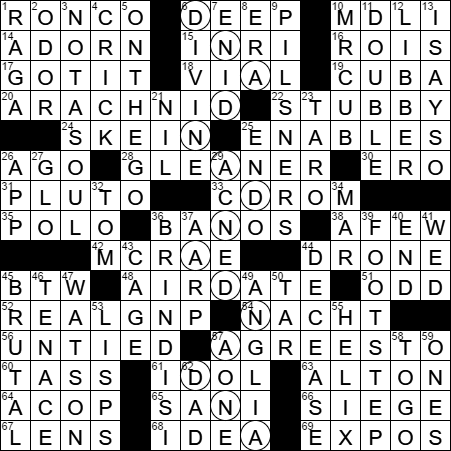 CROSSWORD SETTER: Peter A. Collins
THEME: DNA
We have a DNA DOUBLE HELIX highlighted in circled letters running down the middle of the grid, and several references to DNA in themed down-answers:

Today’s Wiki-est, Amazonian Googlies
Across
1. Infomercial pioneer : RONCO
Ronco is a company the builds and sells products mainly for the kitchen. Over the years the company has been closely associated with the “-O-Matic” suffix, especially the “Veg-O-Matic” vegetable slicer. It is also associated with the phrase “set it and forget it”, which was used for Ronco’s Showtime Rotisserie Grill.

14. Add bling to : ADORN
Bling-bling (often simply “bling”) is the name given to all the shiny stuff sported by rap stars in particular i.e. the jewelry, watches, metallic cell phones, even gold caps on the teeth. The term comes from the supposed “bling” sound caused by light striking a shiny metal surface.

15. Cross initials : INRI
The letters written on the cross on which Jesus died were “INRI”. INRI is an initialism for the Latin “Iesus Nazarenus, Rex Iudaeorum”, which translates into English as “Jesus the Nazarene, King of the Jews”.

18. Apothecary container : VIAL
Nowadays, we would call an apothecary a pharmacist. “Apotecaire” is an Old French word from the 13th century meaning simply “storekeeper”.

19. Historic 2016 Obama destination : CUBA
Cuba is the largest island in the Caribbean. The exact etymology of the name “Cuba” seems a little unclear. Most believe “Cuba” to be derived from the Taíno terms for “where fertile land is abundant” (cubao) or “great place” (coabana).

20. Scorpion, for one : ARACHNID
Arachnids are creatures with eight jointed legs. The name of the class Arachnida comes from the Greek “aráchnē” meaning “spider”.

28. Farmworker in a Millet painting : GLEANER
Jean-François Millet was a French painter of the Barbizon school who is famous for his depictions of peasant farming. I’ve had the privilege of viewing some of his paintings in the Musée d’Orsay in Paris a few times. Millet spent much of his time painting in the countryside surrounding Barbizon, where he lived in France. Millet’s most celebrated work is called “The Gleaners”, which depicts poor women taking advantage of their centuries-old right to remove the bits of grain left in the fields following the harvest.

30. Suffix with ranch : -ERO
A “ranchero” is someone who owns, operates or is employed on a ranch, and is a word with Spanish roots.

35. Lacoste product : POLO
René Lacoste was a French tennis player who went into the clothing business, and came up with a more comfortable shirt that players could use. This became known as a “tennis shirt”. When it was adopted for use in the sport of polo, the shirts also became known as “polo shirts”. And then the “golf shirt” is basically the same thing.

42. Jazz singer Carmen : MCRAE
Carmen McRae was a jazz singer from Harlem in New York City. McRae’s inspiration was singer Billie Holiday, whom McRae met when she was 17 years old.

51. Like all primes except 2 : ODD
A prime number is a number greater than 1 that can only be divided evenly by 1 and itself. There are still some unanswered questions involving prime numbers, perhaps most notably Goldbach’s Conjecture. This conjecture dates back to the 1740s and is assumed to be true, but has never been proven. It states that every even integer greater than 2 can be expressed as the sum of two prime numbers.

52. Inflation-adjusted econ. stat : REAL GNP
A country’s Gross National Product (GNP) is the value of all services and products produced by its residents in a particular year. GNP includes all production wherever it is in the world, as long as the business is owned by residents of the country concerned. Gross Domestic Product (GDP) is different, although related, and is the value of all services and goods produced within the borders of the country for that year.

60. Moscow news source : TASS
TASS is the abbreviation used for the former news agency that had the full name Telegraph Association of the Soviet Union (Telegrafnoe Agentstvo Sovetskogo Soyuza). When the Soviet Union dissolved in 1992, the Moscow-based agency’s scope changed along with its name. It is now known as the Information Telegraph Agency of Russia (ITAR-TASS).

63. Food Network host Brown : ALTON
Alton Brown is a celebrity chef who is behind the Food Network show “Good Eats”, and the host of “Iron Chef America”.

66. Attack on a walled city, maybe : SIEGE
Our word “siege” comes from a 13th century word for a “seat”. The military usage derives from the concept of a besieging force “sitting down” outside a fortress until it falls.

69. First Canadian M.L.B. team : EXPOS
The Washington Nationals (“The Nats”) baseball team started out life as the Montreal Expos in 1969, and were the first Major League Baseball team in Canada. The Expos moved to Washington in 2005 becoming the Nats. There are only two Major Leagues teams that have never played in a World Series, one being the Mariners and the other the Nats.

Down
1. Music often heard in Bollywood films : RAGA
Raga isn’t really a type of music, but has been described as the “tonal framework” in which Indian classical music is composed. Ravi Shankar was perhaps the most famous raga virtuoso (to us Westerners). Western rock music with a heavy Indian influence might be called raga rock.

6. What “to forgive” is : DIVINE
Alexander Pope’s 1709 poem “An Essay on Criticism” is the source of at least three well-known quotations:

7. Children’s author Blyton : ENID
Enid Blyton wrote stories for children that were very popular when I was growing up in the British Isles. Not so long ago, I purchased and reread my favorite of her stories growing up, a children’s novel called “The Secret Island”.

9. Pale lagers : PILSNERS
Pilsener (also “pilsner” or “pils”) is a pale lager. The name “pilsener” comes from the city of Pilsen, now in the Czech Republic. It was in Pilsen, in 1842, that the first bottom-fermented lager was produced. A bottom-fermented beer is much clearer that a top-fermented beer, and has a crisper taste. The “top” and “bottom” refers to where the yeast gathers during the brewing process.

10. Ernie Banks, to fans : MR CUB
First baseman Ernie Banks was known as “Mr. Cub”, and played his entire 19-year professional career with the Chicago Cubs. The Cubs retired Banks’ uniform number 14 in 1982, making him the first Cubs player to be so honored. Banks was known for his catchphrase, “It’s a beautiful day for a ballgame … Let’s play two!”, a reference to his love of the game, always wanting to play a doubleheader.

11. With 55-Down, form of the contents of the circled letters : DOUBLE
55. See 11-Down : HELIX
Famously, James Watson and Francis Crick worked out that the structure of DNA is a double helix. Well, it turns out that some strands of DNA can twist into different shapes. For example, the DNA at the ends of our chromosomes can form a rectangular structure called a triplex or quadruplex.

12. Ad-___ : LIBBER
Ad libitum is a Latin phrase meaning “at one’s pleasure”. In common usage the phrase is usually shortened to “ad lib”. On the stage the concept of an “ad lib” is very familiar.

13. Close of a parental veto : … I SAY SO
“Veto” comes directly from Latin and means “I forbid”. The word was used by tribunes of Ancient Rome to indicate that they opposed measures passed by the Senate.

21. Zilch : NIL
We use the term “zilch” to mean “nothing”. Our current usage evolved in the sixties, before which the term was used to describe “meaningless speech”. There was a comic character called Mr. Zilch in the 1930s in “Ballyhoo” magazine. Mr. Zilch’s name probably came from the American college slang “Joe Zilch” that was used in the early 1900s for “an insignificant person”.

23. Poi base : TARO
The corm of some taro plants is used to make poi, the traditional Hawaiian dish (that I think tastes horrible). When a taro plant is grown as an ornamental, it is often called Elephant Ears due to the shape of its large leaves.

25. Prefix with -morphic : ENDO-
The psychologist William Herbert Sheldon proposed a now-discredited theory that a person’s intelligence, future achievement and temperament could be associated with particular body types. Sheldon proposed three “somatotypes”, a classification that is still used today:

36. Port city at one terminus of the Appian Way : BRINDISI
The Appian Way has to be the most famous of the amazing roads of Ancient Rome. It stretched from Rome right into the south of Italy, terminating in the city of Brindisi in the southeast. The first section of the military road was completed in 312 BC, by the Roman censor called Appius Claudius Caecus, who gave the road its name “Via Appia”, or “Appian Way”.

37. Org. whose magazine was once called Modern Maturity : AARP
AARP is now the official name for the interest group that used to be called the American Association of Retired Persons. The name change reflects the current focus of the group on all Americans aged 50 or over, as opposed to just people who have retired.

39. Fitbit datum : FOOTSTEP
Fitbits are wearable activity trackers that are mainly used to track the number of steps walked. Fitbit Inc. was founded in 2007 in San Francisco.

46. Highish bridge combo : TENACE
In the wonderful card game of bridge, a tenace is a broken sequence of honor cards, like AQ or KJ.

49. East ___ (Norfolk and Suffolk’s locale) : ANGLIA
East Anglia is a region in on the east coast of England, located to the immediate northeast of London. East Anglia is home to the famous university city of Cambridge.

50. Cigarette stat : TAR
The partially-combusted particulate matter that is produced as a cigarette burns forms a resinous material called “tar”. Cigarette tar is different than the tar used on roads, but is very toxic. Marijuana smoke produces a very similar tar to cigarette smoke, and is just as dangerous.

53. Talks like Sylvester : LISPS
Sylvester J. Pussycat was also known as Puddy Tat, and was a character who appeared in “Looney Tunes” and “Merrie Melodies” cartoons. Sylvester was the cat who was often trying to get the better of Tweety Bird, Speedy Gonzales and Hippety Hopper. Sylvester’s trademark line is the exclamation “Sufferin’ succotash!”, which emphasizes the characters pronounced lisp.

58. Deli option : TO GO
The word “delicatessen” (or “deli” for short) came into English from the German “Delikatessen”. The Germans borrowed the word from French, in which language “délicatesse” means “delicious things (to eat)”. The term’s ultimate root is “delicatus”, the Latin for “giving pleasure, delightful”.