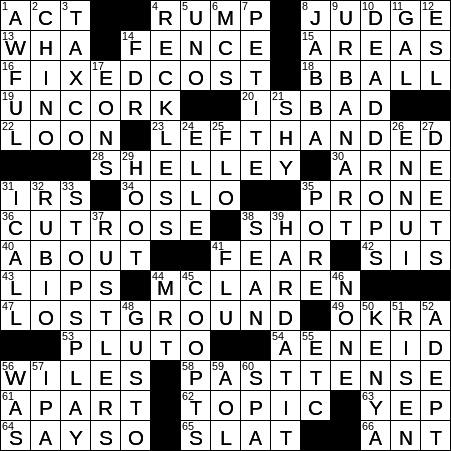 CROSSWORD SETTER: David Steinberg
THEME: Past Tense
Today’s themed answers comprise two words, each of which is a verb in the PAST TENSE:

58A. Like either word in the answers to the five starred clues : PAST TENSE

16A. *Expense independent of production : FIXED COST
23A. *How Clayton Kershaw pitches : LEFT-HANDED
36A. *One of a dozen for a sweetheart : CUT ROSE
38A. *Decathlon event : SHOT PUT
47A. *Something to make up : LOST GROUND

Today’s Wiki-est, Amazonian Googlies
Across
1. One of two in “Hamilton” : ACT
“Hamilton” is a 2015 musical based on the life or US Founding Father Alexander Hamilton, as described in the 2004 biography by Ron Chernow. The representations of the main characters is decidedly ground-breaking. The show is rooted in hip-hop and the main roles such as Hamilton, Thomas Jefferson and George Washington are all played by African-American and Hispanic actors.

16. *Expense independent of production : FIXED COST
In a statement of accounts, gross profit is the difference between revenue from sales and the cost of making goods or providing a service. So-called fixed costs, i.e. overhead, payroll, taxes and interest payments, are not included in gross profits. When these fixed costs have been deducted, what is left is called the net profit, also known as “the bottom line”.

18. Hoops : B-BALL
Basketball is truly a North American sport. It was created in 1891 by Canadian James Naismith at the YMCA in Springfield, Massachusetts. His goal was to create something active and interesting for his students in the gym. The first “hoops” were actually peach baskets, with the bottoms of the baskets intact. When a player got the ball into the “net”, someone had to clamber up and get the ball back out again in order to continue the game!

22. Bird on Canada’s $1 coin : LOON
The great northern loon is the provincial bird of Ontario, and the state bird of Minnesota. The loon once appeared on Canadian $20 bills and also appears on the Canadian one-dollar coin, giving the coin the nickname “the Loonie”.

23. *How Clayton Kershaw pitches : LEFT-HANDED
Clayton Kershaw is a pitcher for the LA Dodgers. Outside of baseball, Kershaw is noted for his charitable work, especially his efforts to raise money for an orphanage in Zambia.

28. “Frankenstein” author : SHELLEY
Mary Shelley’s Gothic novel has the full title of “Frankenstein; or, The Modern Prometheus”. The subtitle underscores one of the themes of the book, a warning about man’s expansion into the Industrial Revolution.

30. ___ Duncan, Obama education secretary : ARNE
Long before Arne Duncan became Secretary of Education he was a professional basketball player, but not in the NBA. Duncan played for the National Basketball League of Australia, for the Eastside Spectres in Melbourne.

31. Org. that investigated Al Capone : IRS
The Chicago gangster Al Capone was eventually jailed for tax evasion. He was given a record 11-year sentence in federal prison, of which he served 8 years. He left prison suffering dementia caused by late-stage syphilis. Capone suffered through 7-8 sickly years before passing away in 1947.

34. Munch Museum’s city : OSLO
Edvard Munch was a Norwegian expressionist, most famous for his painting “The Scream”, painted in 1893. What a wonderful work that is, a true representation of expressionism. The Munch Museum in Oslo is dedicated to his work and life. In 2004, two of Munch’s paintings, “The Scream” and “Madonna”, were stolen from the Munch Museum by armed robbers who subdued the museum guards. The paintings were missing for two years, but recovered in 2006.

38. *Decathlon event : SHOT PUT
Shot put, or events like shot put, have been around for millennia, but the first events that truly resemble today’s track and field event had to come with the invention of the cannonball. Soldiers would “putt” (throw) cannonballs as far as possible in attempts to outperform each other. Shot put has been in the modern Olympic Games since day-one, with an American winning the gold in the first games in 1896, one Robert Garrett.

49. Fried ___ (Southern dish) : OKRA
The plant known as okra is mainly grown for it edible green pods. The pods are said to resemble “ladies’ fingers”, which is an alternative name for the plant. Okra is known as “ngombo” in Bantu, a name that might give us the word “gumbo”, the name for the name of the southern Louisiana stew that includes okra as a key ingredient.

53. Designated dwarf planet since 2006 : PLUTO
Pluto was discovered in 1930, and was welcomed as the ninth planet in our solar system. Pluto is relatively small in size, just one fifth of the mass of our own moon. In the seventies, astronomers began to discover more large objects in the solar system, including Eris, a “scattered disc object” at the outer reaches. Given that Eris is actually bigger than Pluto, and other objects really aren’t that much smaller, Pluto’s status as a planet was drawn into question. In 2006 there was a scientific definition for a “planet” agreed for the first time, resulting in Pluto being relegated to the status of “dwarf planet”, along with Eris.

54. A.P. Latin reading : AENEID
Aeneas was a Trojan who traveled to Italy and became the ancestor of all Romans. Aeneas’s story is told in Virgil’s epic poem “The Aeneid”.

66. Certain female soldier : ANT
In an ant colony, soldier ants differ from worker ants in that they have stronger mandibles and are hence more suitable for fighting. However, when they aren’t fighting, that basically carry out the same functions as the workers. All worker and soldier ants are sterile females.

Down
2. Slacks material : CHINO
Chino is a twill cloth most often used to make hard-wearing pants. The pants have come to be referred to as chinos. Chino cloth was originally developed for use by the military, but quickly became popular with civilians.

3. Mexican tourist city known for its silver : TAXCO
Taxco de Alarcón is a small city in southern Mexico. Taxco is a center for silver mining, and is also well known for the production of silverware and fine items made using silver.

6. Hosts : MCS
The term “emcee” comes from “MC”, an initialism standing for Master or Mistress of Ceremonies.

8. Obese “Star Wars” character : JABBA
Jabba the Hutt is the big blob of an alien that appears in the “Star Wars” movie “The Return of the Jedi”. Jabba’s claim to fame is that he enslaved Princess Leia and kitted her out in that celebrated metal bikini.

10. Spy communication spots : DEAD DROPS
A “dead drop” is a system used by spies to pass along information. The dead drop is essentially a secret location in which a spy can leave information. A case officer, perhaps, picks up the information at a later time. This can be compared to a “live drop”, in which the individuals meet directly.

12. Subj. for many green card seekers : ESL
English as a Second Language (ESL) is sometimes referred to as English for Speakers of Other Languages (ESOL) and English as a Foreign Language (EFL).

14. Only four-term prez : FDR
Since the days of President George Washington, there was an informal tradition that a US President could hold office for two terms, but would not run for a third. Franklin D. Roosevelt was the only president to break with this tradition. President Roosevelt was elected to office four times, and died a few months after starting his fourth term. It was President Roosevelt’s decision to ignore the term limit tradition that led to the adoption of the Twenty-Second Amendment of the Constitution, which provides that “no person shall be elected to the office of President more than twice”.

24. Vogue competitor : ELLE
“Elle” magazine was founded in 1945 in France and today has the highest circulation of any fashion magazine in the world. “Elle” is the French word for “she”. “Elle” is published monthly worldwide, although you can pick up a weekly edition if you live in France.

25. ___ Rida (“My House” rapper) : FLO
Tramar Dillard is better known as rapper Flo Rida. As you might have guessed, Flo Rida was born in the state of Florida.

26. Jaded feeling : ENNUI
“Ennui” is the French word for boredom, a word that we now use in English. It’s one of the few French words we’ve imported that we haven’t anglicized and actually pronounce “correctly”.

31. Bluff-busting words : I CALL
That would be poker.

38. Actor Penn of “Milk” : SEAN
Actor Sean Penn is a two-time Oscar winner, for his roles in “Mystic River” released in 2003 and “Milk” released in 2008. Penn’s celebrity on screen is only matched with his fame off the screen. Apart from his “big name” marriages to singer Madonna and actress Robin Wright, Penn is also well known for political and social activism. He perhaps inherited some of his political views from his father, actor and director Leo Penn. As an actor, Leo refused to “name names” in front of the House Un-American Activities Committee and so was blacklisted in Hollywood and had to move into directing to put bread on the table. In later years as a director he gave his son Sean his first acting role, in a 1974 episode of “Little House on the Prairie”.

41. Bug that thrives in the winter : FLU
Influenza (flu) is an ailment that is caused by a virus. The virus is readily inactivated by the use of soap, so washing hands and surfaces is especially helpful in containing flu outbreaks.

44. “I pity the fool” speaker : MR T
Mr. T’s real name is Laurence Tero Tureaud. Mr. T is famous for many things, including the wearing of excessive amounts of jewelry. He started this habit when he was working as a bouncer, wearing jewelry items that had been left behind by customers at a nightclub so that the items might be recognized and claimed. It was also as a bouncer that he adopted the name Mr. T. His catch phrase comes from the movie “Rocky III”. In the film, before he goes up against Rocky Balboa, Mr. T says, “No, I don’t hate Balboa, but I pity the fool”. He parlayed that line into quite a bit of success. He had a reality TV show called “I Pity the Fool”, and produced a motivational video called “Be Somebody … or Be Somebody’s Fool!”.

48. Zip : GUSTO
“Gusto” is an Italian word meaning “taste”. We use it in English in the phrase “with gusto”, with great enjoyment.

57. Sam Adams Rebel ___ : IPA
India Pale Ale (IPA) is a style of beer that originated in England. The beer was originally intended for transportation from England to India, hence the name.

Samuel Adams was one of the Founding Fathers of the United States, from Boston Massachusetts. Adams followed his father into the family’s malthouse business a few years after young Samuel graduated from Harvard. There were generations of Adams family members who were “maltsters” i.e. those producing malt needed for making beer. Samuel Adams is often described as a brewer, but he was actually a malster. The Samuel Adams brand of beer isn’t directly associated with the Adams family, but it is named in honor of the patriot.

60. Eponymous Belgian tourist locale : SPA
The word “spa” migrated into English from Belgium, as Spa is the name of a municipality in the east of the country that is famous for its healing hot springs. The name “Spa” comes from the Walloon word “espa” meaning “spring, fountain”.