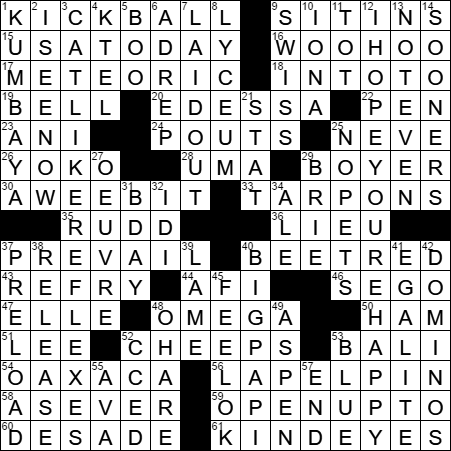 Today’s Wiki-est, Amazonian Googlies
Across
15. News source with a “For the Record” feature : USA TODAY
The title of widest circulation of any American newspaper is an honor competed for by “The Wall Street Journal” and “USA Today”, with each paper selling about 2 million copies each day (including online subscribers). “USA Today” was launched in 1982.

20. City in Central Macedonia : EDESSA
The Greek city of Edessa is in the Central Macedonian region of the country. Edessa was the ancient capital of Macedon, and home to fabled King Midas.

Macedonia is a country in the Balkans of Southeast Europe. Macedonia declared independence from former Yugoslavia in 1991. The country is landlocked and is surrounded by Kosovo, Serbia, Bulgaria, Greece and Albania.

25. Actress Campbell : NEVE
Neve Campbell is a Canadian actress whose big break in movies came with the “Scream” horror film series, in which she had a leading role. I don’t do horror films, so I haven’t seen any of the “Scream” movies. Nor have I seen the TV series “Party of Five” which launched the acting careers of both Campbell and Jennifer Love Hewitt in the nineties.

28. Actress Thurman : UMA
Robert Thurman was the first westerner to be ordained a Tibetan Buddhist monk. Robert raised his children in the Tibetan Buddhist tradition and called his daughter “Uma” as it is a phonetic spelling of the Buddhist name “Dbuma”. Uma’s big break in movies came with her starring role in Quentin Tarantino’s 1994 hit “Pulp Fiction”. My favorite Uma Thurman film is the wonderful 1996 romantic comedy “The Truth About Cats and Dogs”.

29. Charles who starred in the 1938 drama “Algiers” : BOYER
The marvelous actor Charles Boyer was a success in French theater in the 1920s, and then a Hollywood star from the 1930s. In the thirties Boyer played mainly romantic leads, but my favorite role of his is the menacing male lead in the 1944 thriller “Gaslight”. Boyer was married once, to British actress Pat Paterson, a marriage that lasted for 44 years. Boyer committed suicide just two days after his wife died in 1978.

“Algiers” is a 1938 film starring Charles Boyer as a French jewel thief hiding out in the Casbah in Algiers. “Algiers” was a big box-office hit, largely due to the Hollywood debut of Austrian actress Hedy Lamarr. It is said that the screenwriters of the 1942 film “Casablanca” were inspired by the success of “Algiers”, and indeed wrote the “Casablanca” screenplay with Lamarr in mind for the female lead. Lamarr was offered the role, MGM refused to release her from her contract, and so Ingrid Bergman was chosen to play Ilsa Lund.

33. Prized game fish : TARPONS
There are only two species of the fish known as the tarpon: the Atlantic tarpon and Indo-Pacific tarpon. Many fish have swim bladders, organs that are related evolutionarily to the lungs, and are used to control buoyancy. What is unique about the tarpon is that it uses its swim bladder not only for buoyancy, but also as an accessory respiratory organ. In fact, unless the tarpon gets access to air at the water’s surface, it will die.

35. He played Ant-Man in 2015’s “Ant-Man” : RUDD
I think Paul Rudd is a very talented actor. He has played a variety of roles in movies but is probably best known on television for playing Phoebe Buffay’s boyfriend and then husband on the sitcom “Friends”.

In the Marvel universe, the original Ant-Man was a scientist who used a drug to change his size, becoming small in scale while increasing his strength. Ant-Man featured in a 2015 superhero film, with Paul Rudd in the title role.

44. Movie-archiving org. : AFI
The American Film Institute (AFI) was founded in 1967 by the National Endowment for the Arts (NEA). One of the AFI’s more visible programs is the “100 Year Series”, including lists of Best Movies in several categories and a list of the Best Movie Quotes in 100 years of movie-making.

46. Bulbous perennial : SEGO
The Sego Lily is the state flower of Utah, and is a perennial plant found throughout the Western United States.

47. Women’s issue? : ELLE
“Elle” magazine was founded in 1945 in France and today has the highest circulation of any fashion magazine in the world. “Elle” is the French word for “she”. “Elle” is published monthly worldwide, although you can pick up a weekly edition if you live in France.

51. Downwind : LEE
The lee side of an island, say, is the side away from the wind, the sheltered side.

52. What small cranes may produce : CHEEPS
The magnificent birds known as cranes have long legs and long necks. The species called the Sarus Crane is the world’s tallest flying bird.

53. Tourist haven with the capital Denpasar : BALI
Denpasar is the capital city of the Indonesian island province of Bali. The city started its like as a market town, and indeed the name “Denpasar” can be translated from Balinese as “North Market”.

54. Home to the Zapotec people : OAXACA
Oaxaca is a state in the southern part of Mexico on the Pacific coast. The state takes the name of Oaxaca, its largest city.

60. He wrote “Lust’s passion will be served; it demands, it militates, it tyrannizes” : DE SADE
The Marquis de Sade was a French aristocrat with a reputation for a libertine lifestyle. De Sade was also a writer, well known for his works of erotica. He fell foul of the law for some of his more extreme practices and for blaspheming the Catholic church. On an off, de Sade spent 32 years of his life in prison and in insane asylums.

Down
1. Camp classic : KUMBAYA
We tend to use the term “kumbaya” now to mean “naive and unrealistic optimism”. That usage comes from the image of boy scouts and girl guides sitting around a campfire singing the song “Kumbaya”. The song was originally recorded as “Come by here, my Lord”, back in 1927.

4. “Superhits of the Superstars” label : K-TEL
K-Tel was founded in 1962 in Winnipeg, Manitoba by one Philip Kives. K-Tel’s recipe for success was the sale of inexpensive goods with a simple sales pitch and mail-order distribution.

8. Oration location : LYCEUM
The Academy was founded by Plato circa 387 BC in Athens. Aristotle studied at the Academy for twenty years and then founded his own school called the Lyceum.

14. Longhorns’ rivals : SOONERS
They would be the Texas Longhorns and Oklahoma Sooners.

27. Works of a lifetime : OEUVRE
The sum of an artist’s work in his or her lifetime is known as his or her “oeuvre”.

29. Imported wheels? : BRIE
Brie is a soft cheese, named after the French region in which it originated. Brie is similar to the equally famous (and delicious) Camembert.

31. Xmas, for Jimmy Buffett : B’DAY
Here are some famous people who were born on Christmas Day:

32. First name in infamy : IDI
Idi Amin received most of his military training in the British armed forces, eventually achieving the highest rank possible for a Black African in the British Colonial Army in 1959, that of Warrant Officer. On his return to Uganda Amin joined his country’s military and quickly rose to the rank of Deputy Commander of the Army. During that time he was quite the athlete. He was a noted rugby player and swimmer, and for nine years held the Ugandan national light-heavyweight boxing title. By the early seventies, Amin was commander of all the armed forces of Uganda and in 1971 seized power in a military coup, displacing the country’s president Milton Obote. There followed seven years of brutal rule by Amin during which it is estimated that between 100,000 and 500,000 people were murdered. Amin was ousted from power in 1979 after a war with Tanzania, and fled to Libya where he stayed for a year. He then moved to Saudi Arabia, where he was financially supported by the Saudi Royal Family for the remainder of his life. Amin died in 2003.

40. 2013 World Series M.V.P., to fans : BIG PAPI
The Dominican American baseball player David Ortiz has the nickname “Big Papi”. After each home run that Ortiz scores, he looks upwards and points to the sky, a tribute to his mother who died in a car crash in 2002 when she was only 46 years old.

41. French motto part : EGALITE
“Égal” (feminine “égale”) is the French word for “equal, alike”, and a word we sometimes use in English. The national motto of France is “Liberté, égalité, fraternité”, meaning “Liberty, equality, fraternity (brotherhood).

42. Restaurant with a “playful” name : DOMINO’S
Domino’s Pizza started out as DomiNick’s, a pizza store in Ypsilanti, Michigan. The store was purchased by Dominic’s founder Tom Monaghan in 1960, along with his brother. Tom bought out his brother a few months later, for the price of a used VW! The store was renamed Domino’s Pizza in 1965, and two years later the first franchise store was opened. There are now over 8,000 stores worldwide, including one in Tallaght in Ireland, the town where I lived for many years in my youth. That Tallaght store became the first Domino’s outlet in the world to hit a turnover of $3 million a year. We Irish obviously have terrible taste when it comes to pizza …

White masks with black spots were commonly seen in the old Venetian Carnival. The masks were known as “domini”. The domini lent their name to the game of dominoes, due to the similarity in appearance between the mask and a domino tile.

48. United base : O’HARE
United Airlines (UAL) has a complicated history, but can trace its roots back to Aviation Enterprises, founded in 1944 and later called Texas International. The first use of the “United” name in the company’s history was when airplane pioneer William Boeing merged his Boeing Air Transport with Pratt & Whitney to form the United Aircraft and Transport Corporation (UATC) in 1929. The Air Mail Act of 1934 required that UATC be broken up into United Aircraft (which became United Technologies), the Boeing Aircraft Company and United Air Lines.

49. “Dumb and Dumber” drive destination : ASPEN
Aspen, Colorado used to be known as Ute City, with the name change taking place in 1880. Like many communities in the area, Aspen was a mining town, and in 1891 and 1892 it was at the center of the highest production of silver in the US. Nowadays, it’s all about skiing and movie stars.

52. Looped in, in a way : CCED
I wonder do the kids of today know that “cc” stands for carbon copy, and do they have any idea what a carbon copy was? Do you remember how messy carbon paper was to handle?

57. Appropriate answer for this clue : END
Because this is the end of the list of clues.