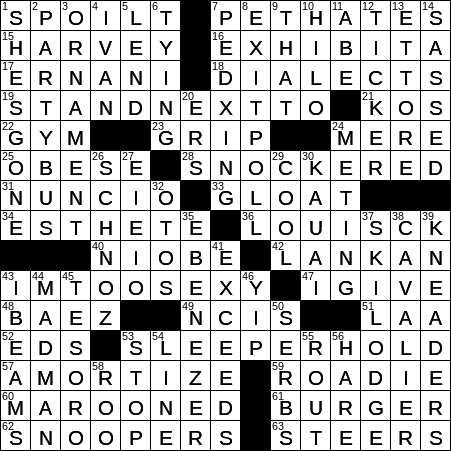 O sweet Fancy! let her loose;
Summer’s joys are spoilt by use,
And the enjoying of the Spring
Fades as does its blossoming;
Autumn’s red-lipp’d fruitage too,
Blushing through the mist and dew,
Cloys with tasting: What do then?

15. Play with an imaginary friend : HARVEY
“Harvey” is a Pulitzer-winning 1944 play by playwright Mary Chase. It’s all about a man who has a man-sized rabbit as an imaginary friend, a rabbit named Harvey. The play was adapted into a famous 1950 play of the same name starring Jimmy Stewart. Harvey became so closely associated with the character that the Jimmy Stewart Museum in Indiana, Pennsylvania presents an annual Harvey Award, to the celebrity who best represents Stewart’s spirit of humanitarianism.

17. Elvira’s love, in opera : ERNANI
“Ernani” is an 1844 opera by Giuseppe Verdi that is based on a play called “Hernani” by Victor Hugo. For over a decade, “Ernani” was Verdi’s most popular opera, and then along came “Il trovatore” in 1853.

23. Film set schlepper : GRIP
On a film set, grips are lighting and rigging technicians who set up the infrastructure that supports lights, cameras etc. The “key grip” is the leader of the whole team. The first “grips” were technicians that worked in circuses in its early days. The name “grip” possibly comes from the bags called grips. in which the technicians carried their tools.

31. Ambassador sent by the Vatican : NUNCIO
The Latin word for “envoy” is nuntius. The Vatican usednuntius for the title of Papal Nuncio, or more correctly, Apostolic Nuncio, a permanent representative of the Holy See to a particular state or even to an international organization. In 1961, the Vienna Convention on Diplomatic Relations declared that a Papal Nuncio is an ambassador like those from any other country, and affords them the same rights and privileges.

34. Gallery habitué : ESTHETE
An aesthete (also “esthete”) is someone who appreciates beauty in art or in nature. Often someone described as an aesthete might show excessive or affected admiration of beauty.

36. Comedian who voiced the lead in “The Secret Life of Pets” : LOUIS CK
“Louis C.K.” is the stage name of comedian Louis Szekely. The family name “Szekely” is Hungarian, and “CK” is an approximation of the name in English. “Louis” has a successful comedy drama show that airs on FX called “Louie”.

40. Analogue of Lot’s wife in Greek mythology : NIOBE
In Greek mythology, when her children were killed, Niobe fled to Mount Sipylus where she was turned into stone and wept for eternity. There is in fact a Niobe’s Rock on Mount Sipylus (in modern-day Turkey) that resembles a female face, and so is known as “The Weeping Rock”.

Lot was a nephew of Abraham, with his story appearing in the Book of Genesis. At one point Lot had to flee the doomed city of Sodom with his wife. God gave instructions that the couple should not look back as they left the city, but Lot’s wife disobeyed and she was turned into a pillar of salt.

42. Sri ___ : LANKAN
The island nation of Sri Lanka lies off the southeast coast of India. The name “Sri Lanka” translates from Sanskrit into English as “venerable island”. Before 1970, Sri Lanka was known as Ceylon, a name given to the country during British rule.

43. Runner-up to “Baby Got Back” on VH1’s “40 Greatest One-Hit Wonders of the ’90s” : I’M TOO SEXY
The English band called Right Said Fred is named for a famous song back in the UK that was a hit for comic actor Bernard Cribbins in 1962. Right Said Fred’s best known hit is “I’m Too Sexy”. Fun song …

48. “And a Voice to Sing With” memoirist : BAEZ
Joan Baez is an American folk singer and a prominent activist in the fields of non-violence, civil rights, human rights and environmental protection. Baez has dated some high-profile figures in her life including Bob Dylan, Steve Jobs (of Apple) and Mickey Hart of the Grateful Dead.

49. “JAG” spinoff : NCIS
NCIS is the Naval Criminal Investigative Service, which investigates crimes in the U.S. Navy and Marine Corps. The service gives its name to the CBS TV show “NCIS”, a spin-off drama from “JAG” in which the main “NCIS” characters were first introduced. The big star in “NCIS” is the actor Mark Harmon. “NCIS” is now a franchise, with spinoff shows “NCIS: Los Angeles” and “NCIS: New Orleans”.

The legal drama “JAG” is named for the highest ranking uniformed lawyer in the US Navy, the Judge Advocate General. Apparently the show was created as a cross between “Top Gun” and “A Few Good Men”.

59. Tour schlepper : ROADIE
A “roadie” is someone who loads, unloads and sets up equipment for musicians on tour, on the road.

60. Like Robinson Crusoe : MAROONED
When Daniel Defoe wrote his marvelous 1719 novel called “Robinson Crusoe”, he was likely thinking of real-life Scottish castaway, Alexander Selkirk. Selkirk was marooned and lived alone on the Pacific Island called “Mas a Tierra” off the coast of Chile, for four years. The island was officially renamed in 1966, and is now called Robinson Crusoe Island.

When Daniel Defoe wrote his marvelous 1719 novel called “Robinson Crusoe”, he was likely thinking of real-life Scottish castaway, Alexander Selkirk. Selkirk was marooned and lived alone on the Pacific Island called “Mas a Tierra” off the coast of Chile, for four years. The island was officially renamed in 1966, and is now called Robinson Crusoe Island.

Down
1. Hall & Oates hit that asks “What went wrong?” : SHE’S GONE
Daryl Hall & John Oates are a pop music duo, most successful in the late seventies and early eighties. They had six number one hits, including the 1982 release “Maneater”.

4. The middle Karamazov brother : IVAN
“The Brothers Karamazov” is the last novel completed by Russian author Fyodor Dostoyevsky, as the author died just four months after it was published.

10. U.S. city whose name looks like a form of poker : HILO
Hilo is the largest settlement on the big island of Hawai’i, with a population of over 43,000 (that’s not very many!). I love the Big Island …

11. Prime minister who helped his country land the 2020 Summer Olympics : ABE
Shinzo Abe first became Prime Minister of Japan in 2006, at which time he was the youngest person to hold the post since WWII and was the first PM born after the war. Abe was in office for less than a year, but was voted in again in 2012. Abe is usually characterized as a right-wing nationalist.

12. Crawl on CNBC : TICKER
CNBC is a business news channel owned by NBC. Launched in 1989, up until 1991 CNBC was known as the Consumer News and Business Channel.

13. Automotive pioneer Bugatti : ETTORE
Italian Ettore Bugatti founded his company Automobiles E. Bugatti in 1909 in Alsace, then part of Germany. Bugatti cars were noted for the beauty of their design as well as their performance. Ettore came from an artistic family. His younger brother Rembrandt Bugatti was a noted sculptor.

26. Beak : SCHNOZ
“Schnoz” is a slang term for a nose, particularly a large one.

27. Trailer for farm animals? : E-I-E-I-O
There was an American version of the English children’s song “Old MacDonald Had a Farm” (E-I-E-I-O), that was around in the days of WWI. The first line of the US version goes “Old MacDougal had a farm, in Ohio-i-o”.

30. Island home to the Sleeping Giant mountain : KAUAI
Because the Hawaiian island of Kauai is one of the wettest places on earth, all the rainfall has helped to carve out magnificent canyons and left superb waterfalls. The island is often used as a backdrop for movies. The facilities at the island’s Lihue Airport reflect the pleasant climate enjoyed by the Hawaiian Islands. Check-in takes place completely outdoors!

44. Gogol’s Aksenty Poprishchin, per the title : MADMAN
Nikolai Gogol was a Russian writer, born in Ukraine. Gogol wrote a lot of satirical pieces that attacked corrupt bureaucracy in Russia, which led to his being exiled. His most famous work is probably “Taras Bulba”, from 1836.

45. San Antonio-based refinery giant that acquired Arco in 2013 : TESORO
The company name ARCO stands for the Atlantic Richfield Company. One of ARCO’s claims to fame is that it is responsible for the nation’s largest Superfund site. Mining and smelting in the area around Butte, Montana polluted the region’s water and soil, and ARCO have agreed to pay $187 million to help clean up the area.

50. Spenders of 100-dinar notes depicting Nikola Tesla : SERBS
Nikola Tesla was born in Serbia, but later moved to the US. Tesla’s work on mechanical and electrical engineering was crucial to the development of alternating current technology, the same technology that is used by equipment at the backbone of modern power generation and distribution systems.

58. Baby boomer, in Aussie slang : ROO
In Australia, male kangaroos are known by several names including bucks, boomers, jacks or old men. Females are called does, flyers, or jills. There seems to be just the one name for young kangaroos: joeys. A group of kangaroos might be called a mob, troop or court.