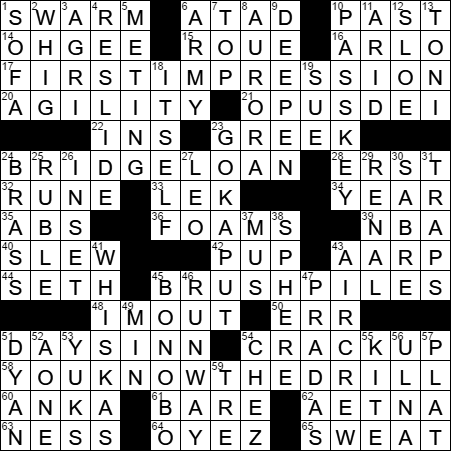 CROSSWORD SETTER: Samuel A. Donaldson
THEME: The Dentist …
Each of today’s themed answers is a well-known phrase that is used to finish off a “punny” statement involving a DENTIST:

17A. The new dentist wanted to make a good … : … FIRST IMPRESSION
24A. The dentist helped the patient afford the visit with a … : … BRIDGE LOAN
45A. The dentist sorted all the bristled instruments into … : … BRUSH PILES
58A. When it was time for the filling, the dentist asked for, well, … : … YOU KNOW THE DRILL

Today’s Wiki-est, Amazonian Googlies
Across
6. Somewhat : A TAD
Back in the 1800s, “tad” was used to describe a young child, and this extended into our usage of “small amount” in the early 1900s. The original use of “tad” for a child is very likely a shortened version of “tadpole”.

15. Hedonistic sort : ROUE
“Roue” is a lovely word, I think, describing a less than lovely man. A roue could otherwise be described as a cad, someone of loose morals. “Roue” comes from the French word “rouer” meaning “to break on a wheel”. This describes the ancient form of capital punishment where a poor soul was lashed to a wheel and then beaten to death with cudgels and bars. I guess the suggestion is that a roue, with his loose morals, deserves such a punishment.

16. Janis’s spouse in the comics : ARLO
The comic strip “Arlo and Janis” is written by Jimmy Johnson. Introduced in 1985, Arlo and Janis are a baby booming couple with an easy approach to life, and who are very much in love.

21. Secret group in “The Da Vinci Code” : OPUS DEI
Opus Dei is Roman Catholic institution that was founded in Spain in 1928, and officially approved by the church in 1950. In 2010, Opus Dei had over 90,000 members, mostly lay people. The institution’s mission is to promote certain aspects of the Roman Catholic doctrine. Opus Dei was portrayed as a sinister organization by Dan Brown in his novel “The Da Vinci Code”.

32. Mystical character : RUNE
A rune is a character in an alphabet that is believed to have mysterious powers. In Norse mythology, the runic alphabet was said to have a divine origin.

33. Albanian currency : LEK
The official currency of Albania is called the lek. The first lek was introduced in 1926, and was apparently named after Alexander the Great.

35. Target of crunches : ABS
The abdominal muscles (abs) are more correctly referred to as the rectus abdominis muscles. They are all called a “six-pack” in a person who has developed the muscles and who has low body fat. In my case, more like a keg …

36. Heads for the bar? : FOAMS
That would be the foam that forms the head of a glass of beer.

43. Big D.C. lobby : AARP
AARP is now the official name for the interest group that used to be called the American Association of Retired Persons. The name change reflects the current focus of the group on all Americans aged 50 or over, as opposed to just people who have retired.

44. Rogen of “Sausage Party” : SETH
Seth Rogen is a Canadian comedian who got a lot of credit for his supporting role in “The 40-Year-Old Virgin”. That led to him being cast as the lead in the 1970 film “Knocked Up”. More recently, Rogen co-directed and and co-starred in the movie “The Interview”, which created a huge ruckus in North Korea.

51. Super 8 alternative : DAYS INN
The Days Inn hotel chain was founded in 1970 by a real estate developer called Cecil B. Day. One of the features of a Days Inn hotel in those early days was an on-site gas pump, which dispensed gasoline at discount prices.

Supposedly, Super 8 is the biggest budget hotel chain in the world. The chain got the name as the original room rate (back in 1972) was $8.88.

62. Insurance giant : AETNA
When the healthcare management and insurance company known as Aetna was founded, the name was chosen to evoke images of Mt. Etna, the European volcano.

63. Capone’s nemesis : NESS
Eliot Ness was the Treasury agent charged with the task of bringing down the notorious Chicago gangster Al Capone. When Ness took on the job in 1930, Chicago law-enforcement agents were renowned for being corrupt, for being on the take. Ness handpicked 50 prohibition agents who he thought he could rely on, later reducing the group to a cadre of 15 and ultimately just 11 trusted men. That group of 11 earned the nickname “The Untouchables”, the agents who couldn’t be bought.

2. Fillmore’s party : WHIG
The Whig Party (in the US) was active from 1833 to 1856, and was the opposition party to the Democrats at that time. One of the tenets of the Whig Party was the supremacy of Congress over the Executive branch. Prominent members of the party included Presidents Zachary Taylor and John Tyler. Abraham Lincoln was also a Whig while he served a two-year term as a US Representative for the state of Illinois. By the time he became President, Lincoln was a member of the Republican Party.

Vice President Millard Fillmore took over the US Presidency when Zachary Taylor died after only 16 months in office. Fillmore was born in the Finger Lakes region of New York State, but grew up around Buffalo. He was one of the founders of the University of Buffalo and served as chancellor there after he left office in 1853.

7. Word after carrot or muffin : TOP
The term “muffin top” is used to describe fatty tissue that spills over a tight waistline of a skirt or pants. I guess the idea is that such a phenomenon resembles the top of a muffin hanging over its case.

8. Night light up north : AURORA
The spectacular aurora phenomenon is seen lighting up the night sky at both poles of the earth (the Aurora Borealis in the north, and the Aurora Australis in the south). The eerie effect is caused by charged particles colliding with atoms at high latitudes.

12. Plum used to flavor gin : SLOE
The sloe is the fruit of the blackthorn bush, and the main flavoring ingredient in sloe gin.

13. Singer Tennille : TONI
The seventies singing duo known as Captain & Tennille was made up of husband and wife Daryl Dragon and Toni Tennille. Early in 2014, Tennille filed for divorce from Dragon after 39 years of marriage. Sad to see that …

23. Die : GO KAPUT
“Kaput” is a familiar term meaning “incapacitated, destroyed”, and comes to us from French (via German). The original word “capot” means “not having won a single trick” in the French card game called Piquet.

24. Pentagon V.I.P.s : BRASS
The incredible building known as the Pentagon was built during WWII, and dedicated on January 15, 1943. It is the largest office building in the world (by floor space) covering an area of about 6.5 million square feet. As it was built during the war years, a major requirement was that it use a minimum amount of steel. So the steel shortage dictated that the building be no more than four stories in height, covering an awful lot of real estate.

25. Belarussian money : RUBLE
The ruble (also “rouble”) is the unit of currency in Russia, as well as several other countries of the former Soviet Union. One ruble is divided into one hundred kopecks (also “kopeks”).

26. Atlas extra : INSET
The famous Flemish geographer Gerardus Mercator published his first collection of maps in 1578. Mercator’s collection contained a frontispiece with an image of Atlas the Titan from Greek mythology holding up the world on his shoulders. That image gave us our term “atlas”.

29. Kidney-related : RENAL
Something described as “renal” is related to the kidneys. “Ren” is the Latin word for “kidney”.

37. M M M : MUS
The Greek letter mu is the forerunner to our Roman letter M.

41. Friskies rival : WHISKAS
The brand name “Whiskas” has been used for the cat food since 1988, but the product itself has been made in McLean, Virginia since 1936. Whiskas was originally sold under the name “Kal Kan”.

47. Some luxury bags : PRADAS
Prada was started in 1913 as a leathergoods shop in Milan, by the two Prada brothers. One of the brothers, Mario Prada, prevented the female members of his family participating in the company as he didn’t believe women should be involved in business (!). When the sexist brother died, his son had no interest in the business so it was his daughter who took over and ran the company for about twenty years, handing it over to her own daughter. I’d say the devil loved that …

51. Cannon on screen : DYAN
The actress Dyan Cannon is perhaps best known for playing Alice in the 1969 film “Bob & Carol & Ted & Alice”, for which she received a Best Actress Oscar nomination. Cannon is also famous for having been on Cary Grant’s long list of wives, from 1965 to 1968 (and he was 33 years her senior).

54. Word in some French restaurant names : CHEZ
“Chez” is a French term meaning “at the house of”, which comes from the Latin word “casa” meaning “cottage” or “hut”.

55. Franklin’s flier : KITE
Benjamin Franklin may not have discovered electricity, but he did important work that helped us understand the nature of electricity. He is reputed to have flown a kite at the end of wet string during a thunderstorm. At the end of the string was a key, and Franklin noted that sparks jumped from the key to the back of his hand, showing that lightning was an electrical phenomenon.

57. Surveyor’s map : PLAT
A plat is a map showing actual and planned features, so a town might have a plat showing existing and intended buildings.