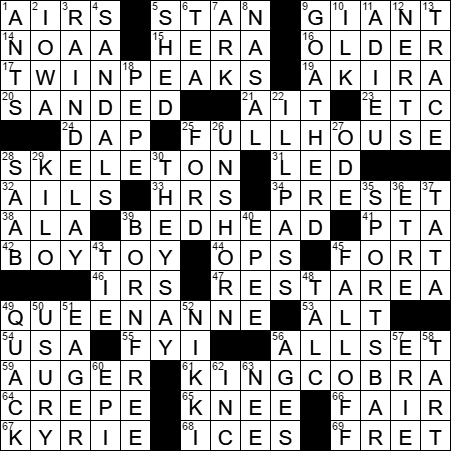 CROSSWORD SETTER: Neville Fogarty
THEME: Bed Head
Each of today’s themed answers is HEADED by (starts with) a size of BED:

Today’s Wiki-est, Amazonian Googlies
Across
5. Ending on several central Asian country names : -STAN
The suffix “-stan” in many place names is Persian for “place of”.

14. U.S. weather agcy. : NOAA
The National Oceanic and Atmospheric Administration (NOAA) is one of the seven federal uniformed services, namely:

15. Zeus’ wife : HERA
In Greek mythology, Hera was the wife of Zeus and was noted for her jealous and vengeful nature, particularly against those who vied for the affections of her husband. The equivalent character to Hera in Roman mythology was Juno. Hera was the daughter of Cronus and Rhea.

17. 1990s TV series about a murder in a town in Washington : TWIN PEAKS
“Twin Peaks” is a TV drama about an FBI murder investigation in the fictional town of Twin Peaks, Washington. I’ve never seen it, but I hear good things …

19. Film director Kurosawa : AKIRA
Akira Kurosawa was an Oscar-winning Japanese film director. His most famous movie to us in the West has to be “The Seven Samurai”, the inspiration for “The Magnificent Seven” starring Yul Brynner, and indeed a basis for “Star Wars: The Clone Wars”.

21. Part of the conjugation of the French “avoir” : AIT
Avoir is French for “to have”. “Ait” is the third person singular form of “avoir” in the subjunctive tense. Got that …?

24. Bump fists : DAP
The dap is a form of handshake, nowadays often a complicated and showy routine of fist bumps, slaps and shakes. Some say that “dap” is an acronym standing for “Dignity And Pride”.

38. Pie ___ mode : A LA
In French, “à la mode” simply means “fashionable”. In America, the term has also come to describe a way of serving pie. Pie served à la mode includes a dollop of cream or ice cream, or as I recall from my time living in Upstate New York, with a wedge of cheddar cheese.

44. Black ___ (covert doings) : OPS
“Black ops” is the name given to covert operations, activities that are usually outside of standard military protocol and may even be against the law. Funding for black ops is usually provided by a secret “black budget”.

45. ___ Ticonderoga : FORT
Fort Ticonderoga was built near the south end of Lake Champlain in New York in the 1750s during the French and Indian War. The most famous engagement at the fort took place during the American Revolution. Fort Ticonderoga was under British control in 1775 when it was captured in a surprise attack by the Green Mountain Boys led by Ethan Allen and Benedict Arnold.

49. English monarch with a “lace” named after her : QUEEN ANNE
What we call “Queen Anne’s Lace” over here in the US is known by many in the British Isles as “wild carrot”. The roots of Queen Anne’s Lace are indeed edible, just like carrots, but only when they are very young because later in life they get very woody. The wild carrot was given the name Queen Anne’s Lace when it was introduced into America as the flowers do resemble white lace. There is one small red flower in the center of the plant that is said to be a drop of blood that Queen Anne spilled when she pricked herself as she was making the lace.

61. Hooded snake : KING COBRA
The king cobra isn’t a cobra at all and rather belongs to its own genus. The king cobra is the world’s longest venomous snake and can grow to over 18 feet in length.

65. Place for the banjo in “Oh! Susanna” : KNEE
“Oh! Susanna” is a song that was published in 1848, written by Stephen Foster. The song is often called “Banjo on My Knee”, an understandable slip given the words of the chorus. “Oh! Susanna” came to be associated with the Forty-Niners, the miners who traveled to California in the 1849 Gold Rush. The lyrics were changed to suit the Gold rush theme with “Alabama” being replaced by “California”, and “banjo” being replaced by “washpan”.

67. N.B.A. star ___ Irving : KYRIE
Kyrie Irving is a professional basketball player who grew up in New Jersey, although he was born in Melbourne, Australia to American parents. Irving played for Duke University before being picked by the Cleveland Cavaliers in the 2011 NBA draft.

Down
6. Lipton offering : TEA
Sir Thomas Lipton was a grocer in Glasgow, Scotland. He founded a tea packing company in North America in 1893, in Hoboken, New Jersey. He was very successful as his blends of tea became popular in the US. Despite the Lipton roots in the UK, Lipton black tea isn’t available there, so I’ve always thought of it as an American brand.

7. Genesis vessel : ARK
The term “ark”, when used with reference to Noah, is a translation of the Hebrew word “tebah”. The word “tebah” is also used in the Bible for the basket in which Moses was placed by his mother when she floated him down the Nile. It seems that the word “tebah” doesn’t mean “boat” and nor does it mean “basket”. Rather, a more appropriate translation is “life-preserver” or “life-saver”. So, Noah’s ark was Noah’s life-preserver during the flood.

18. Amorous cartoon skunk : PEPE
Pepé Le Pew is a very likeable cartoon character from the Looney Tunes and Merrie Melodies series. Pepé is a French skunk, first introduced way back in 1945. He is always thinking of “l’amour” and chases the lady skunks, or a black cat with a white stripe painted down her back accidently.

25. President after Nixon : FORD
Gerald Ford was the only person to have served as both Vice President and President of the US, without having been elected to those positions. Ford was nominated by President Richard Nixon to replace Vice President Spiro Agnew after he resigned in 1973. Vice President Ford assumed the presidency the following year after President Nixon resigned.

28. Onetime Volvo competitor : SAAB
SAAB stands for Svenska Aeroplan AB, which translates into English as Swedish Aeroplane Limited. SAAB was, and still is, mainly an aircraft manufacturer. If you take small hops in Europe you might find yourself on a SAAB passenger plane. The SAAB automotive division was acquired by General Motors in the year 2000, who then sold it to a Dutch concern in 2010. However, SAAB (automotive) finally went bankrupt in 2011. A Chinese consortium purchased the assets of SAAB Automotive in 2012, and so SAAB vehicles are in production again. The new vehicles are using the SAAB name, but cannot use the SAAB griffin logo, the rights to which have been retained by the mother company.

39. Joy Adamson book about Elsa the lioness : BORN FREE
The life story of Elsa the lion was told by game warden Joy Adamson, who had a very close relationship with the lioness from when Elsa was orphaned as a young cub. Adamson wrote the book “Born Free” about Elsa, and then “Living Free” which tells the story of Elsa and her three lion cubs. In the 1966 film based on “Born Free”, Adamson is played by the talented actress Virginia McKenna.

48. Soft mineral : TALC
Talc is a mineral, actually hydrated magnesium silicate. Talcum powder is composed of loose talc, although these days “baby powder” is also made from cornstarch.

49. Phony doc : QUACK
A “quack” is a person who pretends to have knowledge that he or she does not in fact possess. The term especially applies to someone fraudulently pretending to have medical skills. Our modern word is an abbreviation of “quacksalver”, an archaic term with Dutch roots that translates as “hawker of salve”, Back in the Middle Ages, quacksalvers would shout out (quack) as they sold their pseudo-medical wares.

50. Unscrupulous moneylending : USURY
“Usury” was originally the name given to the practice of lending money at interest, but the term now refers to lending at excessive rates of interest.

52. Republican pol Haley from South Carolina : NIKKI
Nikki Haley became Governor of South Carolina in 2011, the first woman to hold the office in the history of the state. Haley was chosen in 2016 to be Ambassador to the United Nations for the Trump administration.

57. Buffalo’s lake : ERIE
Buffalo is the second most-populous city in the state of New York. The city takes its name from Buffalo Creek that runs through the metropolis (although the waterway is called Buffalo River within the city). The source of the name Buffalo Creek is the subject of much speculation, but one thing is clear, there were never any bison in the area.

60. Prefix with dermis : EPI-
The epidermis is the outermost layer of the skin. The thickest piece of epidermal tissue in humans is on the soles of the feet and the palms, measuring about 1.5 mm. The thinnest measures 0.1 mm, and that would be the human eyelid.

62. “Monsters, ___” (2001 movie) : INC
The animated feature “Monsters, Inc.” was released in 2001, and was Pixar’s fourth full-length movie. It’s about cute monsters, and that’s all I know other than that the voice cast included the likes of John Goodman, Billy Crystal and Steve Buscemi.

63. Word before a maiden name : NEE
“Née” is the French word for “born” when referring to a female. The male equivalent is “né”.