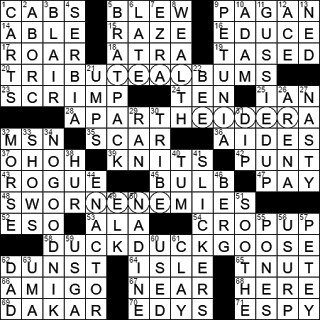 CROSSWORD SETTER: Kristian House
THEME: Duck, Duck, Goose
Today’s themed answers contain hidden words made from the circled letters in the grid. Reading from the top, those hidden words are a DUCK, DUCK and a GOOSE. That sequence reminds of the children’s game DUCK, DUCK, GOOSE:

Today’s Wiki-est, Amazonian Googlies
Across
1. Taxis : CABS
A hansom cab is a very specific design of horse and buggy that was patented by Joseph Hansom in 1834 in England. The “cab” in the name is short for “cabriolet”, an earlier design of carriage on which the hansom was based. It’s from “hansom cab” that we get our modern term “cab”.

9. Wiccan or Druid : PAGAN
A pagan is someone who holds religious beliefs that are different from the main religions of the world. In classical Latin, “paganus” was a villager, a rustic.

18. Razor brand : ATRA
Fortunately for crossword constructors, the Atra razor was introduced by Gillette in 1977. The Atra was sold as the Contour in some markets and its derivative products are still around today.

19. Zapped with a stun gun : TASED
Victor Appleton wrote a novel for young adults called “Tom Swift and His Electric Rifle”. The company that developed the TASER electroshock weapon partly named its product as a homage to the novel. The acronym “TASER” stands for “Thomas A. Swift’s Electric Rifle”.

20. “Bowiemania” and “Come Together: America Salutes the Beatles” : TRIBUTE ALBUMS (hiding “teal”)
The beautiful color of teal takes it name from the duck called a “teal”, which has dark greenish-blue (teal) markings on its head and wings.

25. McKellen who played Gandalf : IAN
Sir Ian McKellen is a marvelous English actor, someone who is comfortable playing anything from Macbeth on stage to Magneto in an “X-Men” movie. On the big screen, McKellen is very famous for playing Gandalf in “The Lord of Rings”. In the UK, Sir Ian is noted for being at the forefront of the campaign for equal rights for gay people, a role he has enthusiastically embraced since the eighties.

28. 1948-94, in South Africa : APARTHEID ERA (hiding “eider”)
Apartheid was the system of racial segregation used in South Africa from 1948 to 1994. “Apartheid” is an Afrikaans word meaning “apart-hood, the state of being apart”. Eiders are large sea ducks. Their down feathers are used to fill pillows and quilts, giving the name to the quilt called an “eiderdown”.

32. I.S.P. with a butterfly logo : MSN
The Microsoft Network (MSN) used to be an Internet service provider (ISP). These days, MSN is mainly a web portal.

42. Common play on fourth down : PUNT
That would be football.

48. Bitter rivals : SWORN ENEMIES (hiding “nene”)
The bird called a nene is a native of Hawaii, and is also known as the Hawaiian goose. The name “nene” is imitative of its call. When Captain Cook landed on the islands in 1778, there were 25,000 nene living there. By 1950, the number was reduced by hunting to just 30 birds. Conservation efforts in recent years have been somewhat successful.

52. That, in Tabasco : ESO
Tabasco is one of Mexico’s 31 “estados” (states), and is located in the very southeast of the country.

53. Chicken ___ king : A LA
A dish prepared “a la king” (usually chicken or turkey), is food prepared in a cream sauce, with mushrooms, pimentos, green peppers and sherry.

62. Actress Kirsten of “Spider-Man” : DUNST
Kirsten Dunst is a Hollywood actress from Point Pleasant, New Jersey. Dunst is perhaps best known for playing the love interest and female lead in the “Spider-Man” series of movies opposite Tobey Maguire. Personally, my favorite Dunst films are “Wimbledon” and “Marie Antoinette”. Dunst is a dual citizen of the US and Germany, as her father is from Hamburg.

69. Senegal’s capital : DAKAR
The Republic of Senegal is a country on the far western coast of Africa. For many years Senegal was a French colony, gaining independence in 1960. The capital of Senegal is Dakar, a city located on the Cap-Vert Peninsula that juts out into the Atlantic Ocean.

70. Ice cream brand known as Dreyer’s west of the Rockies : EDY’S
Dreyers’ ice cream sells its products under the name Dreyers in the Western United States, and Edy’s in the Eastern states. The company’s founders were William Dreyer and Joseph Edy.

Down
3. Tony ___, 1990s-2000s British P.M. : BLAIR
Tony Blair was Prime Minister of the United Kingdom for ten years, from 1997 to 2007. Blair led his Labour Party from the left towards the center, helped along by the phrase “New Labour”. Under his leadership, Labour won a landslide victory in 1997, and was comfortably elected into power again in 2001 and 2005. Blair stepped down in 2007 and Gordon Blair took over as prime minister. Labour was soundly defeated at the polls in the next general election, in 2010.

4. Balkan country once part of Yugoslavia : SERBIA
Serbia is a landlocked country in southeast Europe. After WWII, Serbia became one of several states making up the nation called Yugoslavia. Serbia became independent again in 2006 as Yugoslavia broke up after the declaration of independence by Montenegro.

5. Group that included Demi Moore and Emilio Estevez : BRAT PACK
The Brat Pack moniker is reminiscent of the Rat Pack of the fifties and sixties (Franks Sinatra & co.). To qualify as a “founding” member of the Brat Pack, the actor had to appear in either “The Breakfast Club” or “St. Elmo’s Fire”, or both. So we have Emilio Estevez, Anthony Michael Hall, Rob Lowe, Andrew McCarthy, Demi Moore, Judd Nelson, Molly Ringwald and Ally Sheedy.

6. After curfew : LATE
Our word “curfew” comes from an Old French word meaning “cover fire”. In medieval days a bell would be ring in the evenings as a signal to bank the hearths in preparation for sleeping. The intent was to prevent uncontrolled fires starting from fireplaces that were not tended during the night.

Vox is a news and opinion website that was founded by former “Washington Post” journalist Ezra Klein in 2014.

8. What the Forbes 400 measures : WEALTH
The Forbes 400 is a list published annually by “Forbes Magazine”, a list of the 400 Americans with the largest net worth. Top of the list for the 17 years up to 2010 was Bill Gates. In the year 2000, the 400 wealthiest people controlled 12.2% of the country’s Gross Domestic Product. That’s 12.2% … I wonder what Thomas Jefferson would have thought of that …

9. Flower that’s also a girl’s name : PETUNIA
The flowering plants known as petunias are in a genus that related to the tobacco plant. The name “petunia” comes from the obsolete French word “petun” meaning “tobacco plant”.

10. Economist Smith : ADAM
Adam Smith was a pioneer in the field of “political economy”, an original term used for the study of production and trade and their relationship with law, government and the distribution of wealth. Adam Smith’s great work is called “The Wealth of Nations”, published in 1776. The book was a big hit within his own lifetime and went a long way to earning him the reputation as the father of modern economics and capitalism. Smith coined the phrase “the invisible hand of the market”, describing his assertion that a marketplace tends to self-regulate.

11. Dressed to the nines : GUSSIED UP
“To gussy up” is to dress showily, and is derived from the slang term “gussy” that was used for an overly-dressed person.

The term “to the nines” means “to perfection”. The first person to use the term in literature was Robbie Burns. Apparently the idea behind the use of “nines” is figurative (pun!), with the number nine considered “ideal” as it is arrived at by multiplying three by three.

13. Homer Simpson’s neighbor : NED
Ned Flanders lives next door to Homer on TV’s “The Simpsons”. Ned is voiced by actor Harry Shearer and has been around since the very first episode aired in 1989.

21. Diamond officials, informally : UMPS
That would be baseball.

32. Inventor of a “code” : MORSE
Samuel Morse came up with the forerunner to modern Morse code for use on the electric telegraph, of which he was the co-inventor. Morse code uses a series of dots and dashes to represent letters and numbers. The most common letters are assigned the simplest code elements e.g. E is represented by one dot, and T is represented by one dash. When words are spelled aloud in Morse code, a dot is pronounced as “dit”, and a dash is pronounced as “dah”.

38. “Ben-___” : HUR
Lew Wallace was a general for the Union Army during the Civil War, and was also an author. He wrote a very successful and celebrated book called “Ben-Hur: A Tale of the Christ”, first published in 1880, which was made into a movie starring Charlton Heston.

49. Majestic Yellowstone creature : ELK
Yellowstone was the first National Park to be established in the world, when it was designated as such by President Grant in 1872. What a great tradition it started! The American National Parks truly are a treasure.

50. Literature Nobelist Gordimer : NADINE
Nadine Gordimer is an author and political activist from South Africa. Gordimer’s writing was recognized in 1991 when she was awarded the Nobel Prize in Literature. One of the main focuses of her works is the apartheid that was once part of South African culture and law.

57. “Our Gang” dog : PETEY
Hal Roach made a whole series of comedy shorts with “The Little Rascals”, also known as “Our Gang”. The gang included a Pit Bull Terrier that we should remember, as he had that distinctive ring around his eye. When the dog first appeared on screen, he was called “Pansy”, but the name was soon changed to “Pete the Pup”, or sometimes simply “Petey”.

59. Links org. : USGA
The United States Golf Association (USGA) was formed in 1894. The need for a governing body for the sport became evident that year when both the Newport Country Club and the St. Andrew’s Golf Club in Yonkers, declared that the winner of a tournament at each of their courses was the “national amateur champion”. The first president of the USGA was Theodore Havemeyer, and to this day the one and only US Amateur Trophy bears his name.

61. Adobe material : CLAY
The building material known as adobe has been around a long time, and has been used in dry climates all over the world. The original form of the word “adobe” dates back to Middle Egyptian times, about 2000 BC. The original spelling is “dj-b-t”, and translates as mud (sun-dried) brick.