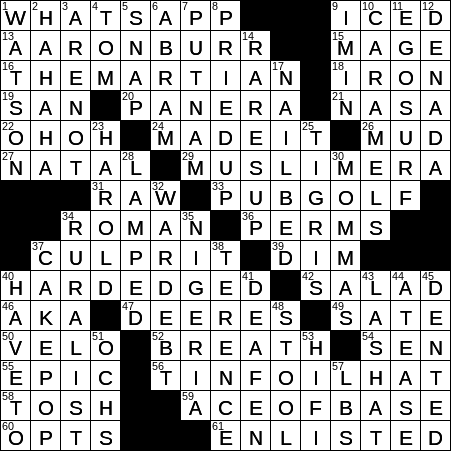 Today’s Wiki-est, Amazonian Googlies
Across
1. Facebook acquired it in 2014 for $19.3 billion : WHATSAPP
WhatsApp is a popular messaging service used on smartphones that sends messages and other files from one mobile phone number to another. Launched in 2011, WhatsApp is incredibly popular, most popular messaging service used today. Facebook acquired WhatsApp in 2014, paying over $19 billion.

13. Narrator of Broadway’s “Hamilton” : AARON BURR
Aaron Burr was the third vice-president of the US, serving under Thomas Jefferson. In the final year of his term in office, Burr fought an illegal duel and killed his political rival Alexander Hamilton. Burr wasn’t brought to justice, but he did pay the price politically. Thomas Jefferson dropped him from his ticket in the election held the following year.

“Hamilton” is a 2015 musical based on the life or US Founding Father Alexander Hamilton, as described in the 2004 biography by Ron Chernow. The representations of the main characters is decidedly ground-breaking. The show is rooted in hip-hop and the main roles such as Hamilton, Thomas Jefferson and George Washington are all played by African-American and Hispanic actors.

15. Dungeons & Dragons class : MAGE
Mage is an archaic word for a magician.

16. Sci-fi hit whose tagline is “Bring him home” : THE MARTIAN
“The Martian” is a very intriguing 2015 science fiction film starring Matt Damon as an astronaut who is accidentally stranded on Mars. The movie is based on a 2011 novel of the same name by Andrew Weir. One thing that I liked about the film is that the science cited is fairly realistic. In fact, NASA collaborated with the filmmakers extensively from script development to principal casting.

18. Core component : IRON
The Earth’s core is divided into two zones, a relatively “solid” inner core and a liquid outer core. Both inner and outer core are comprised mainly of iron and nickel. It is believed that the Earth’s magnetic field is generated by electric currents created by convection currents in the outer core.

20. Subway alternative : PANERA
Panera Bread is a chain of bakery/coffeehouses. It’s a good place to get online while having a cup of coffee. Back in 2006 and 2007, Panera was the largest provider of free Wi-Fi access in the whole of the US.

21. Org. featured in 16-Across : NASA
(16A. Sci-fi hit whose tagline is “Bring him home” : THE MARTIAN)
National Aeronautics and Space Administration (NASA)

29. Religious period dating from A.D. 622 : MUSLIM ERA
What is known as the Muslim era started in with Muhammad’s emigration from Mecca to Medina, defined as year 1 in the Muslim calendar, and AD 622 in the Gregorian calendar.

33. Drinking game where each bar that’s visited is considered a hole : PUB GOLF
Pub Golf is a “game” involving a pub crawl. There are usually nine or eighteen pubs (“holes”) on the crawl. Before starting out, each pub/hole is assigned a “par”. A par-4 hole/pub implies that a pint of beer be consumed in 4 drinks or gulps.

36. Locks in place for a while? : PERMS
“Perm” is the name given to a permanent wave, a chemical or thermal treatment of hair to produce waves or curls. I don’t worry about such things, as it’s a number-one all over for me …

42. Leaves on the menu? : SALAD
Our word “salad” comes from the Latin “salare” meaning “to salt”. The Latin “herba salata” translates as “salted vegetables”, which I guess could be a salad …

47. Some farm vehicles : DEERES
John Deere invented the first commercially successful steel plow in 1837. Prior to Deere’s invention, farmers used an iron or wooden plow that constantly had to be cleaned as rich soil stuck to its surfaces. The cast-steel plow was revolutionary as its smooth sides solved the problem of “stickiness”. The Deere company that John founded uses the slogan “Nothing Runs Like a Deere”, and has a leaping deer as its logo.

49. Asian appetizer : SATE
The dish known as “satay” originated in Java, Indonesia and is marinated pieces of meat served on a skewer in a sauce, often a spicy peanut sauce. “Satay” is the Indonesian spelling, and “sate” is the Malay spelling.

50. Lead-in to -drome : VELO-
An arena used for competitive track cycling is known as a velodrome. “Vélo” is the familiar term used as an abbreviation for “vélocipède” (“velocipede” in English). A velocipede is a human-powered, wheeled vehicle. Tricycles, bicycles and unicycles are all velocipedes.

54. Sanders, for one: Abbr. : SEN
Bernie Sanders has served as US Senator from Vermont since 2007. Sanders describes himself as a democratic socialist, and used to appear on the ballot as an independent. Prior to joining the Democratic Party in 2015, Sanders had been the longest-serving independent in the history of the US Congress.

55. Longfellow’s “Evangeline,” e.g. : EPIC
“Evangeline, A Tale of Acadie” is an epic poem by Henry Wadsworth Longfellow, first published in 1847. Nowadays we tend to think first of “Hiawatha” when we see the name Longfellow, but within his own lifetime “Evangeline” was Longfellow’s most famous work. The poem tells the tale of Evangeline Bellefontaine who is separated from her beloved when the Acadians were forcibly removed from their land by the British.

56. Stereotypical wear for a crackpot theorist : TIN FOIL HAT
Before thin sheets of aluminum metal were available, thin sheets of tin were used in various applications. Tin foil isn’t a great choice for wrapping food though, as it imparts a tinny taste. On the other side of the pond, aluminum foil has a different name. No, it’s not just the different spelling of aluminum (“aluminium”). We still call it “tin foil”. You see, we live in the past …

58. Reggae’s Peter : TOSH
Peter Tosh was a musician from Jamaica, a member of the Wailers reggae band. Sadly, Tosh was murdered in a home invasion and extortion attempt in 1987.

59. Swedish pop group whose 1994 hit “The Sign” was #1 for six weeks : ACE OF BASE
Ace of Base is a pop group from Sweden. The band had several names before settling on Ace of Base, which was inspired by the Motörhead song “Ace of Spades”.

Down
4. With 1-Down, five-time winner of the British Open : TOM
(1D. See 4-Down : WATSON)
Tom Watson is a professional golfer from Kansas City, Missouri. Watson was the world number one from 1978 to 1982. In 2009, he got very close to winning the British Open Championship, losing in a 4-hole playoff. At the time, Watson was just a few months shy of 60 years age …

6. Presidential middle name : ABRAM
President James Abram Garfield was born in Orange Township in Ohio, the youngest son of Abram Garfield. Abram had moved from New York to Ohio specifically to court his childhood sweetheart Mehitabel Ballou. When Abram arrived in Ohio, however, he found that Mehitabel had already married. Abram did manage to join the Ballou family though, as he eventually married Mehitabel’s sister Eliza.

7. General Israel of the American Revolution : PUTNAM
Israel Putnam was a officer in the American army during the Revolutionary War. Putnam is best known for the key role that he played in the Battle of Bunker HIll during the Siege of Boston. Many believe that it was Israel Putnam who coined the phrase “Don’t fire until you see the whites of their eyes” during the battle.

11. Search for oneself on Google, e.g. : EGOSURF
We’ve all done it, googling our own names to see what comes up. It’s called “egosurfing”.

23. Kid-lit character with a “Purple Crayon” : HAROLD
“Harold and the Purple Crayon” is a children’s book by Crockett Johnson that was first published in 1955. Harold is a 4-year-old boy who can create a world of his own simply by drawing it with a purple crayon.

25. River flowing from the Garden of Eden, in the Bible : TIGRIS
According to the Book of Genesis, Adam and Eve lived in a garden “in” Eden, with Eden being geographically located by reference to four rivers including the Tigris and the Euphrates. Some scholars hypothesize that Eden was located in Mesopotamia, which encompasses much of modern-day Iraq.

28. Clobbered, in British slang : LAMPED
“To lamp” a guy is to hit him, pretty hard, to clobber him.

30. May honorees, colloquially : MOMMAS
Note the official punctuation in “Mother’s Day”, even though one might think it should be “Mothers’ Day”. President Wilson, and Anna Jarvis who created the tradition, specifically wanted Mother’s Day to honor the mothers within each family and not just “mothers” in general, so they went with the “Mother’s Day” punctuation.

35. Country of 180+ million people that has never participated in the Winter Olympics : NIGERIA
Nigeria is in West Africa, and it takes its name from the Niger River which flows through the country. Nigeria is the most populous country on the continent, with over 180 million inhabitants. It is also the most populous member of the Organization of the Petroleum Exporting Countries (OPEC).

38. Ancient playwright who specialized in New Comedy : TERENCE
Terence is a the common name used in English when referring to the Roman playwright Publius Terentius Afer.

51. Adolph who coined the motto “All the News That’s Fit to Print” : OCHS
Adolph Ochs was a former owner of “The New York Times”. Ochs had purchased a controlling interest in “The Chattanooga Times” when he was only 19 years of age, and took control of “The New York Times” in 1896 when he was 38 years old. Soon after taking charge, Ochs coined the paper’s slogan “All the News That’s Fit to Print”. It was also Ochs who moved the paper’s headquarters to a new building on Longacre Square in Manhattan, which the city later renamed to the famous “Times Square” after the newspaper. The Ochs-Sulzberger family has owned the paper ever since.

53. Player of oldies when they were newies : HI-FI
Hi-fi systems were introduced in the late forties, and is audio equipment designed to give a much higher quality reproduction of sound than cheaper systems available up to that point. “Hi-fi” stands for “high fidelity”.

57. Birth announcement info: Abbr. : LBS
The unit of mass that we know today as a “pound” is descended from the old Roman unit of weight known as a “libra”. That “libra” connection is why we abbreviate “pound” to “lb”. The name “pound” though comes from the Latin “pondo” meaning “weight”. Our term “ounce” (abbreviated to “oz.”) comes from the Latin “uncia”, which was 1/12 of a Roman “libra”.