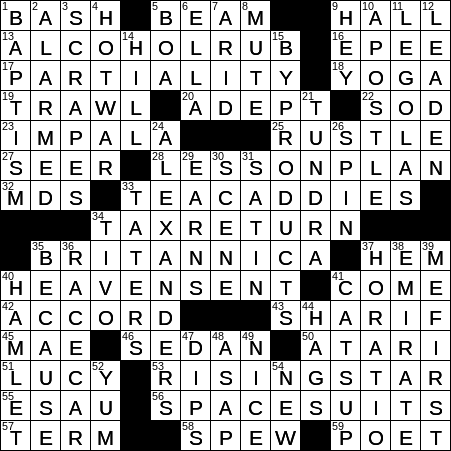 Today’s Wiki-est, Amazonian Googlies
Across
16. Pentathlete’s need : EPEE
The original pentathlon of the ancient Olympic games consisted of a foot race, wrestling, long jump, javelin and discus. When a new pentathlon was created as a sport for the modern Olympic Games, it was given the name the “modern pentathlon”. First introduced in 1912, the modern pentathlon consists of:

18. Class with a flexible schedule? : YOGA
In the West we tend to think of yoga as a physical discipline, a means of exercise that uses specific poses to stretch and strengthen muscles. While it is true that the ancient Indian practice of yoga does involve such physical discipline, the corporeal aspect of the practice plays a relatively small part in the whole philosophy. Other major components are meditation, ethical behavior, breathing and contemplation.

23. 1958 Chevrolet debut : IMPALA
The Chevrolet Impala was introduced in 1957, and you can still buy one today. “Impala” is the Zulu word for “gazelle”.

33. Gunpowder containers : TEA CADDIES
A “caddy” is a container used for tea. “Caddy” comes from the Malay word “kati”, a unit of weight used as a standard by British tea companies in the East Indies.

Gunpowder tea is a Chinese green tea in which the leaves are rolled into small pellets. Apparently the resulting grains of tea resemble black powder, giving the name “gunpowder tea”.

35. Pax ___ (century preceding W.W. I) : BRITANNICA
There was a period of relative peace from 1815 through 1914, i.e. from the end of the Napoleonic Wars until the start of World War I. Given the imposing role played by the British Empire during that period, the era is referred to as Pax Britannica (Latin for “British Peace”), styled after Pax Romana.

“Pax Romana” is Latin for “Roman Peace”. The term literally described a period in Roman history for the 1st and 2nd centuries AD during which the Roman Empire was ruled by Caesar Augustus. Under his control, expansionist ideas by powerful generals were held in check, and the peoples of foreign lands ruled by the Romans were relatively calm. The peace enjoyed was considered uneasy as Rome governed its conquered territories with an iron fist, and insurrection was likely at all times. The expression “pax Romana” then came to be used in English to describe any situation in which there is an uneasy peace, a peace imposed by a powerful state on a weaker state.

43. “Genghis Khan” star, 1965 : SHARIF
Omar Sharif was a great Hollywood actor from Egypt, someone who played major roles in memorable movies such as “Doctor Zhivago” and “Lawrence of Arabia”. But to me, he was my bridge hero (the card game). In his heyday, Sharif was one of the best bridge players in the world.

45. “___ West Lips Sofa” (Dalí piece) : MAE
The famous surrealist painter Salvador Dalí was born in Figueres, Spain. I had the privilege of visiting the Dalí Museum in Figueres some years ago, just north of Barcelona. If you ever get the chance, it’s a “must see” as it really is a quite magnificent building with a fascinating collection.

46. Car buyer’s option : SEDAN
The American “sedan” car is the equivalent of the British “saloon” car. By definition, a sedan car has two rows of seating and a separate trunk (boot in the UK), although in some models the engine can be at the rear of the car.

50. Early Nintendo competitor : ATARI
At one point, the electronics and video game manufacturer Atari was the fastest growing company in US history. However, Atari never really recovered from the video game industry crash of 1983.

51. Archaeological find of 1974 : LUCY
Hundreds of pieces of bone fossils, representing 40% of a female skeleton, were discovered in Ethiopia in 1974. The bones were dated to about 3.2 million years ago, and belonged to a hominim species known as Australopithecus afarensis. The team that work to recover the skeleton made a habit of playing the Beatles song “Lucy in the Sky with Diamonds” loudly throughout the camp each evening. As a result, the skeleton was nicknamed “Lucy”.

55. Hairy one in a Bible story : ESAU
Esau was the twin brother of Jacob, the founder of the Israelites. When their mother Rebekah gave birth to the twins “the first emerged red and hairy all over (Esau), with his heel grasped by the hand of the second to come out (Jacob)”. As Esau was the first born, he was entitled to inherit his father’s wealth (it was his “birthright”). Instead, Esau sold his birthright to Jacob for the price of a “mess of pottage” (a meal of lentils).

Down
1. Immersive experience : BAPTISM
Baptism is a rite in Christian traditions admitting a candidate, often an infant, into the Church. The ceremony usually uses water as a sign of purification. Water may be poured on the head, or the candidate may be totally immersed in water.

6. Actress Raines of “Tall in the Saddle” : ELLA
Ella Raines was a Hollywood film and television actress who was at the height of her career in the early 1940s.

7. Like most of Mauritania : ARID
The Islamic Republic of Mauritania is a country in North Africa, on the Atlantic coast. The country is named after the old Roman province of Mauretania, although the ancient province was located further north in what is now Morocco and part of Algeria.

10. Paul or Simon : APOSTLE
According to the Bible, Saint Paul was an apostle, although he was not one of the original Twelve Apostles. Paul is said to have written 14 of the 27 books in the Christian New Testament.

Simon the Zealot was one of the lesser known of the Apostles, not to be confused with Simon Peter, leader of the early Christian Church. There are suggestions that Simon the Zealot may be the same person as Simon, brother of Jesus.

21. Land beyond the tree line : TUNDRA
Tundra is an ecosystem that is treeless, or very nearly so. There are three types of tundra. Arctic and Antarctic tundra can’t support the growth of trees as the ground is pretty much frozen. Alpine tundra cannot support tree-growth due to high altitude.

24. Creamy cocktails : ALEXANDERS
The class of cocktails known as Alexanders comprise a base spirit added to crème de cacao and cream. The classic version is the Brandy Alexander.

34. It lets you see what you missed : TIVO
TiVo was introduced in 1999 and was the world’s first commercially successful DVR (Digital Video Recorder).

37. Speaker of the line in 40-Down : HORATIO
(40D. Play containing the line “Good night, sweet prince” : HAMLET)
Horatio is a character in Shakespeare’s “Hamlet”, a friend of the play’s hero and a relatively uninterested party in the intrigue of the storyline. As a trusted friend, Horatio serves as a sounding board for Hamlet, allowing us in the audience to gain more insight into Hamlet’s thinking and character as we listen to the two in conversation. One of Horatio’s more famous lines is spoken right after the title character dies, as Horatio says goodbye to his friend:

38. Dubai, for one : EMIRATE
Dubai is one of the seven Emirates that make up the federation known as the United Arab Emirates (UAE). The two largest members of the UAE (geographically) are Dubai and Abu Dhabi, the only two of the seven members that have veto power over UAE policy.

41. Stuff sold in squeeze bottles : CATSUP
“Catsup” is an American spelling of “ketchup” that is sometimes used, especially in the south of the country.