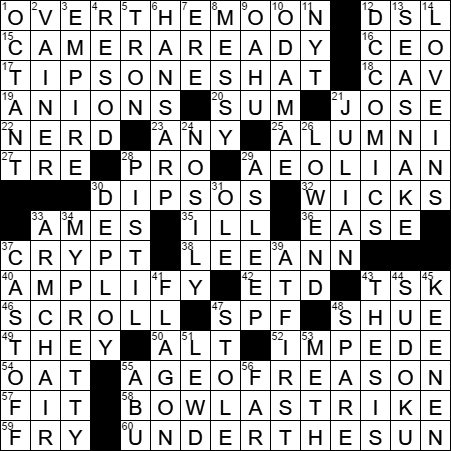 Today’s Wiki-est, Amazonian Googlies
Across
12. Browsing inits. : DSL
An Internet Service Provider (ISP) is just what the name indicates, a company that provides its customers with access to the Internet. One way that ISPs differentiate themselves from each other is in the way in which end users are connected to the ISP’s network. So, there are cable ISPs, DSL ISPs, dial-up ISPs and satellite ISPs.

15. Suitable for printing : CAMERA-READY
Several kind blog readers have commented or emailed me to explain the term “camera-ready”. It seems that it comes from the world of publishing, referring to one of the final steps in the process. A camera-ready document is ready to be imaged and printed.

25. Group that grows every May : ALUMNI
An “alumnus” (plural … alumni) is a graduate or former student of a school or college. The female form is “alumna” (plural … alumnae). The term comes into English from Latin, in which alumnus means foster-son or pupil. “Alum” is an informal term used for either an alumna or an alumnus.

29. Windblown : AEOLIAN
Aeolus was the ruler of the winds in Greek mythology, and he gave his name to the adjective “aeolian” (also “aeolic, eolic”) meaning “windblown”, something produced or carried by the wind.

30. Lushes : DIPSOS
“Dipsomania” is a craving for alcohol to the point of damaging one’s health. “Dipsa” is the Greek for “thirst”, hence dipsomania is a “manic thirst”.

33. Home of a Big 12 school : AMES
Iowa State University of Science and Technology (ISU) is located in Ames, Iowa. Among many other notable events, ISU created the country’s first school of veterinary medicine, in 1879. The sports teams of ISU are known as the Cyclones.

38. Singer Womack with the 2000 hit “I Hope You Dance” : LEE ANN
Lee Ann Womack is a country music singer and songwriter from Jacksonville, Texas.

Our term “depot”, meaning a station or warehouse, derives from the word “dépôt”, French for “deposit” or “place of deposit”.

46. Synagogue holding : SCROLL
A Torah scroll (also “Sefer Torah”) is a handwritten copy of the Torah, the first five books of the Hebrew Scriptures.

47. Lifeguard’s concern, in brief : SPF
In theory, the sun protection factor (SPF) is a calibrated measure of the effectiveness of a sunscreen in protecting the skin from harmful UV rays. The idea is that if you wear a lotion with say SPF 20, then it takes 20 times as much UV radiation to cause the skin to burn than it would take without protection. I say just stay out of the sun …

48. Elisabeth of “CSI” : SHUE
Elisabeth Shue has always been a favorite actress of mine. She has been in several popular films including “The Karate Kid”, “Cocktail”, two of the “Back to the Future” movies, “Leaving Las Vegas”, and my personal favorite “Adventures in Babysitting”. More recently, Shue had a recurring role on the TV crime drama “CSI: Crime Scene Investigation”.

49. “___ shut me up in Prose” (Emily Dickinson poem) : THEY
Emily Dickinson wrote nearly 1800 poems in her lifetime, with less than a dozen published before she died in 1886. Emily’s younger sister discovered the enormous collection, and it was published in batches over the coming decades. Try this one for size:

Still! Could themself have peeped –
And seen my Brain – go round –
They might as wise have lodged a Bird
For Treason – in the Pound –

50. Key on a keyboard : ALT
The Alt (alternate) key is found on either side of the space bar on US PC keyboards. The Alt key evolved from what was called a Meta key on old MIT keyboards, although the function has changed somewhat over the years. Alt is equivalent in many ways to the Option key on a Mac keyboard, and indeed the letters “Alt” have been printed on most Mac keyboards starting in the nineties.

55. Period following the Renaissance : AGE OF REASON
The Age of Enlightenment (also known as the Age of Reason) was an era bridging the 17th and 18th centuries in which rationalism and scientific method started to hold sway against ideas grounded in tradition and faith. Key figures in the Age of Enlightenment were the likes of John Locke, Isaac Newton and Voltaire.

58. Get 10 from one? : BOWL A STRIKE
In bowling, a spare is recorded on a score sheet with a forward slash mark. A strike is recorded with a large letter X.

6. “Birds in an Aquarium” artist : HANS ARP
Jean Arp was a French artist renowned for his work with torn and pasted paper, although that wasn’t the only medium he used. Arp was the son of a French mother and German father and spoke both languages fluently. When he was speaking German he gave his name as Hans Arp, but when speaking French he called himself Jean Arp. Both “Hans” and “Jean” translate into English as “John”. In WWI Arp moved to Switzerland to avoid being called up to fight, taking advantage of Swiss neutrality. Eventually he was told to report to the German Consulate and fill out paperwork for the draft. In order to get out of fighting, Arp messed up the paperwork by writing the date in every blank space on the forms. Then he took off all of his clothes and walked with his papers over to the officials in charge. Arp was sent home …

7. “Thanks in old age – thanks ___ I go”: Walt Whitman : ERE
Walt Whitman is considered to be one of the greatest American poets. He was born in 1819 on Long Island, and lived through the American Civil War. Whitman was a controversial character, even during his own lifetime. One view held by him was that the works attributed to William Shakespeare were not actually written by Shakespeare, but rather by someone else, or perhaps a group of people.

12. Flash source : DC COMICS
The Flash is a DC Comics superhero who is nicknamed “the Scarlet Speedster” or “the Crimson Comet”. The Flash’s superpower is his ability to move extremely quickly, with speed that defies the laws of physics.

13. Venomous swimmer : SEA SNAKE
I used to live in the Philippines and spent almost every weekend SCUBA diving (happy days!). Occasionally, I’d come across a sea snake slithering through the water. The rule was always to never swim “above” sea snakes as they don’t have gills and have to come to the surface to breathe. You don’t want to be in the way of a sea snake when it’s coming up for a breath of air, as all sea snakes are venomous and many fatalities have been recorded from their bites.

14. Peaceful protests : LOVE-INS
A “love-in” was a peaceful protest most associated with the late sixties. The gatherings themselves often involved meditation, music and the use of psychedelic drugs. The term “love-in” was apparently coined by LA comedian Peter Bergman who had a radio show at that time.

21. Kind of calendar : JULIAN
Our contemporary western calendar was introduced in 1582 by Pope Gregory XIII, giving it the name “Gregorian” calendar. The Gregorian calendar superseded the Julian calendar, both of which were aligned with movement of the sun across the sky. At issue was that the Julian calendar was misaligned with the solar year by about 11 minutes, creating an error that accumulated over time. Pope Gregory corrected the length of the year by introducing a more accurate rule for calculating leap years. He also wiped out the cumulated “misalignment”, in order to bring together the Christian celebration of Easter and the spring equinox. That correction involved the “loss” of 11 days. The last day of the Julian calendar (Thursday, 4 October 1582) was immediately followed by the first day of the Gregorian calendar (Friday, 15 October 1582).

41. Mead holder : FLAGON
Mead is a lovely drink, made from fermented honey and water.

44. Numbers game? : SUDOKU
Number puzzles similar to our modern-day Sudoku first appeared in French newspapers in the late 1800s. The format that we use today was created by Howard Garns, a 74-year-old freelance puzzle constructor from Connersville, Indiana and first published in 1979. The format was introduced in Japan in 1984 and given the title of “Sūji wa dokushin ni kagiru”, which translates to “the digits are limited to one occurrence”. The rather elaborate Japanese title was eventually shortened to Sudoku. No doubt many of you are fans of Sudoku puzzles. I know I am …

45. One of the Wayans brothers : KEENEN
The Wayans family is known as the First Family of Entertainment as it is replete with actors, directors, screenwriters and comedians. I hate to admit it, but I don’t think I know any of them!

48. Get 10 from two? : SPARE
In bowling, the downing of all ten pins in two balls in the same frame is a “spare”, scoring ten points. The player gets a bonus, equal to the number of pins downed with the next ball, which could be up to ten. Hence, a spare can be worth up to 20 points

53. Kind of lab : METH
“Meth” is a street name used for the drug methamphetamine, also called “crank” and “crystal meth”.

55. “Aladdin” character who’s transformed into an elephant : ABU
Abu is a monkey in the Disney production of “Aladdin”. The character is based on Abu, a thief in the 1940 film “The Thief of Baghdad”.