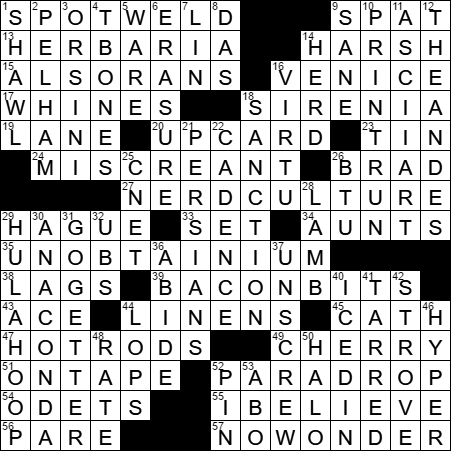 16. Vivaldi’s birthplace : VENICE
The city of Venice in northeast Italy is built in a saltwater lagoon on the Adriatic Coast, on 117 small islands. The classic transportation along the waterways is the gondola, but this is really only used for tourists these days, as well as on ceremonial occasions. The locals rely on the motorized water-buses.

Antonio Vivaldi was one of the great composers of the Baroque period. He achieved fame and success within in his own lifetime, notoriety that faded soon after he died. Vivaldi’s music has reemerged in recent decades and I am sure everyone is familiar with at least part of his most famous composition, the violin concerto called “The Four Seasons”. Vivaldi was nicknamed “The Red Priest” because he was indeed a priest, and he had red hair.

18. Manatee’s order, whose name comes from Greek myth : SIRENIA
Manatees, also known as sea cows, are very large marine mammals that can grow to 12 feet in length. The manatee is believed to have evolved from four-legged land mammals and probably shares a common ancestor with the elephant. Manatees belong to the order Sirenia, after the sirens of Greek mythology. The legend is that lonely sailors mistook sea cows for mermaids or sirens.

20. Exposed part of a deal : UPCARD
Stud poker is the name given to many variants of poker, all characterized by the dealer giving each player a mix of cards face-down and face-up. The cards facing upwards are called “upcards”. The cards facing downwards are called “hole cards”, cards only visible to the individual who holds that particular hand. This gives rise to the phrase “ace in the hole”, a valuable holding that only the player with the ace is aware of.

23. Oscar composition, mostly : TIN
Legend has it that actor Emilio Fernández was the model for the Oscar statuette. Cedric Gibbons, art director at MGM, created the design and supposedly convinced a reluctant Fernández to pose nude for “Oscar”.

26. Boy’s name that’s a hardware item : BRAD
A “brad” is a slender wire nail with a relatively small head that is typically used to “tack” pieces of wood together, to fasten either temporarily or with minimal damage to the wood. Nowadays, brads are commonly applied using a nail gun.

27. Cosplay and fanfic are parts of it : NERD CULTURE
Cosplay (costume play) and fanfic (fan fiction).

29. Peace Palace locale, with “The” : HAGUE
International Court of Justice (ICJ) is commonly referred to as the World Court, and is based in the Hague in the Netherlands. Housed in a building known as the Peace Palace, the ICJ is the main judicial branch of the United Nations. One of the court’s functions is to settle disputes between UN member states. The US no longer accepts the jurisdiction of the ICJ, after the court’s 1986 decision that the US’s covert war against Nicaragua was in violation of international law. The UN Security Council is charged with enforcing ICJ rulings, and so the US used its veto power in the Nicaragua v. United States case.

44. Pottery Barn stock : LINENS
Pottery Barn is a chain of home furnishing stores that has been around since 1949. Not my kind of store, quite frankly …

45. ___ lab (place for an angiogram) : CATH
An angiogram is an x-ray (usually) image taken of the circulatory system, often enhanced by the introduction of a radio-opaque “dye” into the bloodstream.

47. Speedsters : HOT RODS
A “hot rod” is an American car that has been modified for speed by installing a larger than normal engine. A “street rod” is generally a more comfortable type of “hot rod”, with the emphasis less on the engine and more on custom paint jobs and interiors. By definition, a street rod must be based on an automobile design that originated prior to 1949.

54. “Golden Boy” writer : ODETS
“Golden Boy” was a play written by Clifford Odets that was first performed in 1937 on Broadway. There was a film adaptation released in 1939 that starred a young William Holden. “Golden Boy” was the film that launched Holden’s career.

56. Decorticate : PARE
“To decorticate” is “to remove the cortex”. That cortex might be the bark of a tree perhaps, or even the cortex of the brain.

Down
2. The “P” of P. G. Wodehouse : PELHAM
English author P. G. Wodehouse’s full name was Sir Pelham Grenville Wodehouse. He is most famous for penning the stories about the goofy Bertie Wooster and his wise and wonderful valet Jeeves. Wodehouse moved to France in 1934, to minimize his tax liability. During WWII he was interned by the Germans for nearly a year, and made broadcasts to the US for the enemy from Germany. Even though his on air talks were relatively apolitical and humorous, they were not well received in his homeland. Wodehouse never returned to England, and died in New York in 1975.

11. An emoticon is a simple form of it : ASCII ART
ASCII (American Standard Code for Information Interchange) lists codes for 32 “control” characters, as well as the 95 printable characters. These binary codes are the way that our computers can understand what we mean when we type say a letter, or a number. Unicode is a more contemporary standard, and is like “Ascii on steroids”, encompassing more characters.

12. Chain of seven countries : THE ANDES
The Andes range is the longest continuous chain of mountains in the world, running right down the length of the west coast of South America for about 4,300 miles. The highest peak in the Andes is Mt. Aconcagua, at an elevation of 22,841 feet. Interestingly, the peak of Mt. Chimborazo in Ecuador is the furthest point on the Earth’s surface from the center of the planet. That’s because of the equatorial “bulge” around the Earth’s “waist”.

14. A maverick doesn’t follow it : HERD
The concept of being one’s own person, going it alone, is popularly known as being a “maverick”. In the days of open range ranching, a maverick was a steer that didn’t carry a brand. An unbranded animal was usually the result of a branded animal giving birth on the open range, with the young growing up without having being captured and claimed by an owner. The use of the name “maverick” comes from Texas rancher Samuel Maverick, who refused to brand his cattle. He stated that he did not want to inflict pain on his cattle, and so laid claim to any cattle on the range that weren’t branded. His stubborn refusal to cooperate with the neighboring ranchers gave rise to our modern description of a single-minded individual as a “maverick”.

16. Knowledge of fine arts : VIRTU
“Virtu” are objects of art or curios. The same term is used to describe an interest in and knowledge of such objects. The term comes from the Latin “virtus” meaning “virtue, goodness, manliness”. The idea is that “virtu” is an appreciation for the “goodness” of such art.

25. Website with “The Next Big Thing” videos : CNET
c|net is an excellent technology website. c|net started out in 1994 as a television network specializing in technology news. The host of “American Idol”, Ryan Seacrest, started off his career as host of a c|net show.

26. One of about 3,412 in a kW-h : BTU
In the world of heating, ventilation and air conditioning (HVAC), the power of a heating or cooling unit can be measured in British Thermal Units (BTUs). This dated unit is the amount of energy required to heat a pound of water so that the water’s temperature increases by one degree Fahrenheit.

29. Circus ring? : HULA HOOP
Hula hoops were a big craze in the 1950s, but they have been around in various forms at least since the year 500 BCE!

32. The TV network in “Network” : UBS
The movie “Network” was released in 1976. It was directed by Sidney Lumet and stars Peter Finch in his final role, for which he won a posthumous Academy Award. That Oscar for Peter Finch was remarkable in that it was the first time the Best Actor award had been won after the actor passed away, and it was also the first time it had been won by an Australian.

41. Besmirched : TARRED
“Besmirch” is a derivative of “smirch”, with both words meaning to “make dirty”. In particular, to besmirch is to sully someone’s reputation.

52. One standing in an alley : PIN
Bowling has been around for an awfully long time. The oldest known reference to the game is in Egypt, where pins and balls were found in an ancient tomb that is over 5,000 years old. The first form of the game to come to America was nine-pin bowling, which had been very popular in Europe for centuries. In 1841 in Connecticut, nine-pin bowling was banned due to its association with gambling. Supposedly, an additional pin was added to get around the ban, and ten-pin bowling was born.

53. Classification system used in some banks : ABO
The most important grouping of blood types is the ABO system. Blood is classified as either A, B, AB or O, depending on the type of antigens on the surface of the red blood cells. A secondary designation of blood is the Rh factor, in which other antigens are labelled as either positive or negative. When a patient receives a blood transfusion, ideally the donor blood should be the same type as that of the recipient, as incompatible blood cells can be rejected. However, blood type O-neg can be accepted by recipients with all blood types, A, B, AB or O, and positive or negative. Hence someone with O-neg blood type is called a “universal donor”.