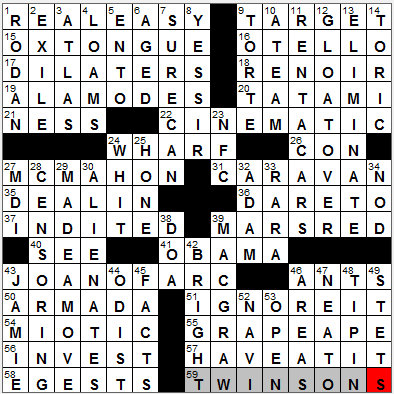 
Today’s Wiki-est, Amazonian Googlies
Across
1. Like a snap : REAL EASY
Well, I am not a big fan of the term “real easy”. The intent here is to use an adverb, as in “it is really easy”, but “real” is an adjective.

15. Kind of stew : OX TONGUE
Beef or ox tongue isn’t a very lean cut of meat, with about 75% of its calories coming from fat.

16. Role Enrico Caruso was preparing for when he died : OTELLO
Enrico Caruso was an Italian tenor, famous as one of the first opera singers to embrace the phonograph technology of the early 1900s. He made 290 recordings that were released between 1902 and 1920, and today they’re all available on CD or as digital downloads.

18. He said “I never think I have finished a nude until I think I could pinch it” : RENOIR
Pierre-Auguste Renoir was a French painter, very much at the forefront of the Impressionist movement. Renoir was a prolific artist, with several thousand works attributed to him. The largest collection of Renoirs is actually in the United States. You can see 181 of his paintings at the Barnes Foundation just outside Philadelphia.

19. Glossy scarf fabrics : ALAMODES
Alamode is a silk fabric with a very lustrous appearance, mainly used for scarfs and other head coverings. As one might guess, the fabric takes its name from the French “à la mode” meaning “in the fashion”.

26. Yardbird : CON
A yardbird is a convict, a word that entered the language in the mid-fifties from the idea that the “birds” took exercise in the prison “yard”.

27. “Here’s Johnny!” memoirist : MCMAHON
Of course Ed McMahon was Johnny Carson’s sidekick on “The Tonight Show”. McMahon was trained as a fighter in WWII, but did not see action. However, he did fly 85 combat missions in Korea.

31. Line in the sand? : CARAVAN
“Caravan” derives from the Persian “karwan”, the word for a group of desert travelers. Over in the British Isles “caravan” is the name we give to travel trailers.

37. Put down in writing : INDITED
“To indite” is to set something down in writing. Ultimately it derives from Latin and has the same roots as our verb “to indict”.

39. Deep orangish hue : MARS RED
Mars red is the shade of red noted on the planet Mars (surprise, surprise!). The surface of the planet has a very high iron oxide content, so Mars is red because it is rusty!

41. One code-named Renegade by the Secret Service : OBAMA

By tradition, the Secret Service code names used for the US President and family all start with the same letter. For the current First Family, that letter is R:

43. Hundred Years’ War leader : JOAN OF ARC
Joan of Arc led the French Army successfully into battle a number of times during the Hundred Years’ War with England. When she was eventually captured she was tried in Rouen, the seat of the occupying English government in France at that time. There she was burned at the stake having been found guilty of heresy. Joan of Arc was canonized some 600 years later, in 1920, and is now one of the patron saints of France.

50. A destroyer may be in one : ARMADA
The most famous Armada was the Spanish fleet that sailed against England in order to overthrow Queen Elizabeth I in 1588. It failed in its mission, partly due to bad weather encountered en route. Ironically, the English mounted a similar naval attack against Spain the following year, and it failed as well.

54. Like pupils that are too small : MIOTIC
An unnatural constriction of the pupil of an eye is called miosis. Unnatural dilation is known as mydriasis.

55. Big, purple Hanna-Barbera character : GRAPE APE
“The Great Grape Ape Show” was a cartoon from Hanna-Barbera that originally aired on Saturday mornings in the seventies.

59. Romulus and Remus, to Rhea Silvia : TWIN SONS
The mythical figure Ilea is better known as Rhea Silvia. Rhea Silvia was one of the Vestal Virgins, a priestess of the goddess Vesta. As such she was sworn to celibacy, but she conceived anyway and gave birth to the twins Romulus and Remus. Rhea Silvia claimed that she was seduced in the forest by the god Mars. The twins were ordered to be killed, but the servant given the task felt pity for the boys and instead set them adrift on the River Tiber. The twins were discovered on the river’s bank by a wolf who had lost her own cubs, and she raised them as her own.

1. 1956 movie monster : RODAN
Rodan is a flying pterosaur appearing in a series of Japanese monster movies, created by the same studio that had earlier come up with Godzilla.

9. Rich dessert : TORTE
A torte is a type of cake made primarily with eggs, sugar and ground nuts (but no flour).

11. Dollar store? : RENT-A-CARS
Dollar Rent A Car was founded in 1965. Chrysler acquired the company in 1990 and merged it with Thrifty Car Rental, which Chrysler had purchased a year earlier.

14. Like Life Savers : TORIC
Life Savers were introduced in 1912. The candy was created by Clarence Crane who contracted a pill manufacturer to press his formulation for mints into shape. The pill manufacturer found that the pieces of candy were produced more easily if a hole was stamped in the middle. The Life Saver name was chosen as the candy had the same shape as lifebuoys.

23. Cowboys compete in it: Abbr. : NFC
The Dallas Cowboys play in the National Football Conference (NFC) of the NFL. The Cowboys are famous for a lengthy streak of 20 consecutive winning seasons, from 1966 to 1985. They are the highest valued sports franchise in the country. The only team in the world that’s worth more money is the UK’s Manchester United Soccer team.

24. Tiny amount : WHIT
Both “whit” (and “fig”) are used to describe a trivial amount, a mere trifle.

25. Aid in gaining an edge : HONE
“To hone” is to sharpen, a verb derived from the noun “hone”, a whetstone used in sharpening.

39. “Goodbye, Columbus” co-star, 1969 : MACGRAW
Ali MacGraw’s most famous role was the female lead in the 1970 film “Love Story”. MacGraw became romantically involved with Steve McQueen as they filmed “The Getaway” in 1972. The pair eventually wed after they managed to unwind their first marriages. They divorced in 1978.

43. ___ Oliver, a k a the Naked Chef : JAMIE
Jamie Oliver has been known as the Naked Chef since he filmed his first television show in the late nineties. The show’s title, “The Naked Chef”, was a reference to the simplicity of Oliver’s recipes, and not any lifestyle choice …

45. Trivia quiz fodder : FACTS
Trivia are things of little consequence. “Trivia” is the plural of the Latin word “trivium” which means “a place where three roads meet”. Now that’s what I call a trivial fact …

47. Just ducky : NEATO
Both “neato” and “ducky” are slang words meaning “fine”, as in “things are just ducky”.

49. Correction corrections : STETS
“Stet” is the Latin word meaning “let it stand”. In editorial work, the typesetter can be instructed to disregard any change previously marked by writing the word “stet” beside the change and then underscoring the change with a line of dots or dashes.

52. Language spoken on Pandora : NA’VI
In the movie “Avatar”, the Na’vi are the “blue” people that live on the moon Pandora.