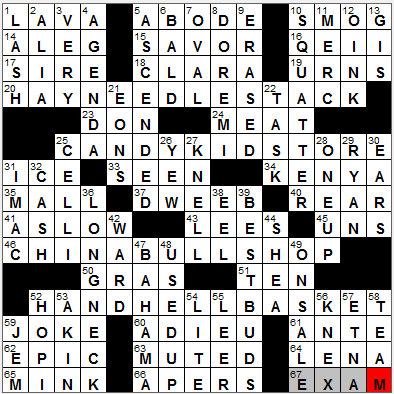 CROSSWORD SETTER: Parker Lewis
THEME: It’s Literally in There … each of the theme answers is a common expression with the structure “A in a B-C”. The expressions are rearranged for the answers so that the “A” is literally placed in the “B-C”, giving the answer structure of B(A)C:

20A. Nearly impossible target, literally : HAY(NEEDLE)STACK (a needle in a haystack)
25A. One who’s enraptured, say, literally : CANDY(KID)STORE ( kid in a candy store)
46A. Inadvertently destructive sort, literally : CHINA(BULL)SHOP (a bull in a china shop)
52A. Something rapidly deteriorating goes to it, literally : HAND(HELL)BASKET (Hell in a handbasket)


Today’s Wiki-est, Amazonian Googlies
Across
1. Certain lamp goo : LAVA
The lava lamp was invented by a British man, Edward Craven-Walker, in 1960. The “lava” is a mixture of wax and carbon tetrachloride, floating in a water/glycerol mix. The wax reduces in density as it picks up heat from the incandescent bulb in the lamp’s base. The wax rises, cools, and then sinks to the bottom of the liquid only to be heated again.

10. Subject of an exhaustive E.P.A. study? : SMOG
“Smog” is of course a portmanteau word formed by melding “smoke” and “fog”. It was first used to describe the air around London in the early 1900s.

The Environmental Protection Agency was set up during the Nixon administration, and began operation at the end of 1970.

16. Monarch moniker, for short : QEII
Princess Elizabeth became queen in 1952 when her father, King George VI died. The Princess was on an official visit to Kenya when her husband broke the news to her, that she had become queen. When she was crowned in 1953 in Westminster Abbey, it was the first coronation to be televised. At almost 60 years, Queen Elizabeth’s reign is currently the third longest in the history of the UK. She is closing in on the record of Queen Victoria who reigned longest, for almost 64 years.

18. California’s Santa ___ University : CLARA
Santa Clara University is a private, Jesuit school in Santa Clara, California. The first of its colleges was founded in 1851, making it the oldest higher education institute in the whole state.

34. Equatorial land : KENYA
Kenya lies on the east coast of Africa, right on the equator. The country takes her name from Mount Kenya, the second highest peak on the continent (after Kilimanjaro).

37. Weenie : DWEEB
Dweeb is a relatively recent American slang that came out of college life in the late sixties. Dweeb, squarepants, nerd, they’re all not-nice terms that mean the same thing: someone excessively studious and socially inept.

40. Caboose : REAR
The word “caboose” originally came from Middle Dutch, the word for a ship’s galley. When the last car in a train in North America was given a stove for the comfort of the crew, it took on the name “caboose”.

43. Some jeans : LEES
The Lee company famous for making jeans was formed in 1889, by one Henry David Lee, in Salina, Kansas.

50. Mardi follower : GRAS
“Mardi Gras” translates from French as “Fat Tuesday”, and gets its name from the practice of eating rich foods on the eve of the fasting season known as Lent.

52. Something rapidly deteriorating goes to it, literally : HAND(HELL)BASKET (Hell in a handbasket)
One theory about the origin of the expression “to go to hell in a handbasket” refers back to the days of the guillotine. If we are to believe the movies, those decapitated heads fell into handbaskets, and the unfortunate victim presumably headed off to hell soon after.

64. “Chocolat” actress Olin : LENA
The lovely Lena Olin is a Swedish actress, clearly someone who had acting in her blood. Her mother was the actress Britta Holmberg and her father the actor and director Stig Olin. Olin had a very successful career in Sweden, often working with the great Ingmar Bergman. Olin’s breakthrough international and English-speaking role was playing opposite Daniel Day-Lewis in “The Unbearable Lightness of Being” released in 1988. Way back in 1974, the lovely Miss Olin was crowned Miss Scandinavia in a beauty pageant for Nordic women held in Helsinki, Finland.

11. Chicago exchange, informally, with “the” : MERC
The Chicago Mercantile Exchange started its life as the Chicago Butter and Egg Board in 1898. The Merc is the site for exchange of commodities, among other things.

13. Division units, for short : GIS
The initials “G.I.” stand for “Government Issue” and not “General Infantry” as is often believed. GI was first used in the military to denote equipment made from Galvanized Iron, and during WWII, incoming German shells were nicknamed “GI cans”. Soon after, the term GI came to be associated with “Government Issue” and eventually became an adjective to describe anything associated with the Army.

25. Stringed instruments : CELLI
“Celli” is the plural of “cello”.

26. Wood used in Voldemort’s wand : YEW
Voldemort is the main “bad guy” in the “Harry Potter” series of books. I heard J. K. Rowling, the author of the books, on the radio the other day and she tells us that “Voldemort” is supposed to be pronounced with a silent “t” on the end, so it sounds kind of French. But, when the movies came out the actors went with the hard “t”, and that’s the pronunciation that seems to prevail now.

27. Sound at a funeral : KNELL
The word “knell” is used for a solemn ring from a bell, often associated with death or a funeral. “Knell” comes the Old English “cnell” and is probably imitative in origin, sounding like a peal from a large bell.

29. Film private : RYAN
“Saving Private Ryan” is an epic 1998 movie directed by Steven Spielberg, a real “must see”. The D-Day invasion scenes were shot over a two-month period on the southeast coast of Ireland. The scenes with the landings cost about $12 million to shoot, and involved about 1,500 extras. Most of those extras were members of the Irish Reserve Defence Forces. As an aside, the Irish Reserve Forces have been in quite a few films, including the battle scenes of “Braveheart”.

31. Jobs plan, once : IMAC
The iMac is a desktop computer platform from Apple, introduced in 1998. One of the main features of the iMac is its “all-in-one” design, with the computer console and monitor integrated.

Steve Jobs certainly was a business icon in Silicon Valley. I don’t think it is too surprising to learn that the brilliant Jobs didn’t even finish his college education, dropping out of Reed College in Oregon after only one semester.

38. Sushi staple : EEL
Sushi is a Japanese dish that has as its primary ingredient cooked, vinegared rice. The rice is usually topped with something, most often fish, and can be served in seaweed rolls. If you want raw fish by itself, then you have to order “sashimi”.

42. ___ of the state : WARD
In the case when a court takes on the responsibility for the legal protection of an individual, that person is said to be a ward of the state.

44. 2000 World Series locale : SHEA
Shea Stadium in Flushing Meadows, New York was named after William A. Shea, the man credited with bringing National League baseball back to the city, in the form of the New York Mets.

47. Grand ___ Island : BAHAMA
Grand Bahama is the largest island in the Bahamas chain. It only lies 56 miles off the coast of Florida. The Spanish gave the island the name of “Gran Bajamar”, which means “Great Shallows”.

52. Neighbors of the Navajo : HOPI
The Hopi nation live on a reservation that actually resides within the much larger Navajo reservation in Arizona.

56. Building toy brand : K’NEX
The construction toy with the name K’Nex is the phonetic spelling of the word “connects”. The toy was invented by Joel Glickman, who came up with the idea while playing with straws as he sat at a table after a wedding. He launched K’Nex in 1993, and it is still going strong.

57. Italian mount : ETNA
Mt. Etna is the largest of three active volcanoes in Italy, about 2 1/2 times the height of its equally famous sister, Mt Vesuvius.

59. Scout’s brother : JEM
Jem and Scout are two of the children of Atticus Finch, the protagonist in the novel “To Kill A Mocking Bird”.

Harper Lee’s Pulitzer Prize-winning novel “To Kill A Mockingbird” was first published in 1960. The book is a mainstay in English classes all around the world, a great ambassador for American literature, I’d say.