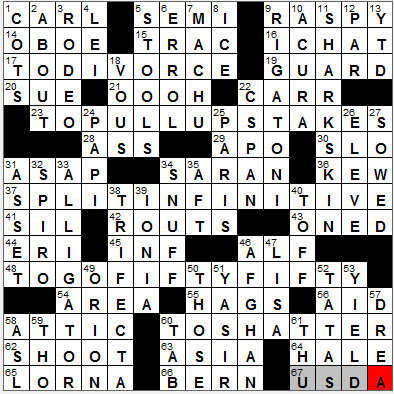 CROSSWORD SETTER: Barry Franklin, Sara Kaplan
THEME: SPLIT INFINITIVE … each of the theme answers is an infinitive, and a term or word meaning “to split”:


Today’s Wiki-est, Amazonian Googlies
Across
1. Astronomer Sagan : CARL
Carl Sagan was a brilliant astrophysicist, and a great communicator. He was famous for presenting obscure concepts about the cosmos in such a way that we mere mortals could appreciate. He also wrote the novel “Contact” which was adapted into a fascinating 1997 film of the same name starring Jodie Foster.

9. Like E.T.’s voice : RASPY
1982’s classic science fiction movie “E.T. the Extra-Terrestrial” was directed by Steven Spielberg. The idea behind the film came from Spielberg himself, and the character E.T. was based on an imaginary friend that he conjured up as a child after his parents divorced in 1960.

14. Sounder of the tuning note at the start of an orchestra rehearsal : OBOE
The oboe is perhaps my favorite of the reed instruments. The name “oboe” comes from the French “hautbois” which means “high wood”. When you hear an orchestra tuning before a performance, you’ll note (pun intended!) the oboe starts off the process by playing an “A”. The rest of the musicians in turn tune to that oboe’s “A”. Oh, and if you want to read a fun book (almost an “exposé”) about life playing the oboe, you might try “Mozart in the Jungle” by oboist Blair Tindall. I heard recently that HBO are working towards a pilot based on the book. I can’t wait to see it!

16. Apple communication tool : ICHAT
iChat was introduced in 2002, and is still in use today. It’s Apple’s “instant messaging” application that integrates with the Mac Operating System.

22. Caleb who wrote “The Alienist” : CARR
One of Caleb Carr’s novels is a latter day Sherlock Holmes mystery, called “The Italian Secretary“. It was written as a homage to Sir Arthur Conan Doyle (using the Holmes character with the permission of the Doyle estate). I am a big fan of Sherlock Holmes stories so I must put this one on my reading list.

23. See 37-Across : TO PULL UP STAKES
“To pull up stakes“ is to move, to change one’s residence perhaps. The term originated in America with the first settlers from England. The original immigrants built palisades around their settlements for protection, driving stakes into the ground. When it was time to move, the settlers would take their palisades with them, pulling up stakes and loading them on carts for travel.

28. Provider of a jawbone to Samson : ASS
According to the Bible, Samson slays one thousand Philistines using “the jawbone of an ass”.

The initials “G.I.” stand for “Government Issue” and not “General Infantry” as is often believed. GI was first used in the military to denote equipment made from Galvanized Iron, and during WWII, incoming German shells were nicknamed “GI cans”. Soon after, the term GI came to be associated with “Government Issue” and eventually became an adjective to describe anything associated with the Army.

31. “Stat!” : ASAP
The exact etymology of “stat”, used to mean “immediately” in the medical profession, seems to have been lost in the mists of time. It probably comes from the Latin “statim” meaning “to a standstill, immediately”. A blog reader has helpfully suggested that the term may also come from the world of laboratory analysis, where the acronym STAT stands for “short turn around time”.

34. Clingy wrap : SARAN
What’s known as plastic wrap in America, we call cling-film in Ireland. Plastic wrap was one of those unintended inventions, a byproduct of a development program to create a hard plastic cover for cars.

37. Grammatical infelicity … or what 17-, 23-, 48- or 60-Across is? : SPLIT INFINITIVE
Whether English infinitives should be “split” or not is the subject of much debate. In the English language the infinitive of a verb is made up of the “to” marker and the “bare infinitive”, e.g. “to be”, “to do” and “to go”. A split infinitive occurs when an adverb is placed not after the infinitive but in between the “to” marker and the bare infinitive. The most famous example in modern English I think has to be in the opening lines of the “Star Trek” television series: “to boldly go (where no man has gone before …)”.

44. “___ tu” (Verdi aria) : ERI
The aria “Eri tu” is from Verdi’s opera “Un ballo in maschera” (A Masked Ball). The opera tells the story of the assassination of King Gustav III of Sweden during a masked ball.

45. Foot soldiers: Abbr. : INF
The word “infantry” derives from the Latin “infantem” meaning “youth”. The original idea was that infantry soldiers were the lowest on the totem pole, the “youngest” recruits. So our word “infant” has the same root as “infantry”.

46. TV extraterrestrial : ALF
“ALF” was a sitcom that aired in the late eighties. ALF was a hand-puppet, supposedly an alien that crash-landed in a suburban neighborhood. “ALF” stands for “alien life form”.

63. Part of Georgia is in it : ASIA
The former Soviet Socialist Republic of Georgia is now an independent country. Supposedly, the Georgian people were given their name because they especially revered St. George. The flag of Georgia does indeed feature five St. George’s crosses.

64. Sound : HALE
“Hale” is an adjective meaning “healthy”. Both the words “hale” and “healthy” derive from the Old English “hal” meaning healthy.

65. “___ Doone,” 1869 historical romance : LORNA
“Lorna Doone” was written by Richard Doddridge Blackmore. R. D. Blackmore was an English novelist, very celebrated and in demand in his day (the late 1800s). His romantic story “Lorna Doone” was by no means a personal favorite of his, and yet it is the only one of his works still in print.

66. Alpine capital : BERN
Bern (or Berne) is the capital city of Switzerland. The official language of the city is German, but the language most spoken in Bern is a dialect known as Bernese German.

67. Food safety org. : USDA
The US Department of Agriculture dates back to 1862 when it was established by then-president Abraham Lincoln. Notably, Lincoln referred to the USDA as the “people’s department”, reflecting the agrarian basis of our economy back then.

Down
2. Circa : ABOUT
“Circa” is a Latin word meaning “around, near, about the time of”. We use it directly in English, as well as derivative words such as “circle” and “circus”.

3. Official state sport of Wyoming : RODEO
“Rodeo” is a Spanish word, which is usually translated as “round up”.

4. Wahine wear : LEI
“Lei” is the Hawaiian word for “garland, wreath”, although in more general terms a “lei” is any series of objects strung together as an adornment intended to be worn.

“Wahine” is the word for “woman”, in both Hawaiian and Maori.

6. Weasley family owl, in Harry Potter books : ERROL
Errol is one of the magical creatures from the “Harry Potter” series of books by J. K. Rowling. Errol is a Great Grey Owl that delivers the mail for the Weasley family. He is old and prone to accidents so often needs help from other owls.

7. ___ Picchu (Inca site) : MACHU
Machu Picchu is known as “The Lost City of the Incas”, and it can be visited on a mountain ridge in Peru, 50 miles northwest of the city of Cuzco in the southeast of the country. The name Machu Picchu means “old peak”.

9. Pasta variety : RIGATONI
Rigatoni is a tubular pasta, relatively short, with ridges along its length.

11. Shiny suit fabric : SHARKSKIN
Sharkskin fabric has nothing to do with sharks, and is a smooth worsted material with a soft texture.

24. Big ___ (nickname of baseball’s David Ortiz) : PAPI
The Dominican American baseball player David Ortiz has the nickname “Big Papi”. After each home run that Ortiz scores, he looks upwards and points to the sky, a tribute to his mother who died in a car crash in 2002 when she was only 46 years old.

25. “We’ll always have ___” (line from “Casablanca”) : PARIS
I love the words of one critic describing the chemistry between Bogart and Bergman “Casablanca”. He wrote: “she paints his face with her eyes”. Wow …

32. Vice president Agnew : SPIRO
Spiro Agnew served as Vice-President under Richard Nixon, before becoming the only VP in American history to resign because of criminal charges (there was a bribery scandal). He was also the first Greek-American to serve as VP, the son of a Greek immigrant who shortened his name from Anagnostopoulos.

38. Ambitious track bet : TRIFECTA
To win the bet called an exacta, the bettor must name the horses that finish first and second, in the exact order. The related bet called the trifecta requires naming of the first, second and third-place finishers in the right order.

39. Ancient Aegean region : IONIA
The geographic region called Ionia is located in present day Turkey. Ionia was prominent in the days of Ancient Greece although it wasn’t a unified state, but rather a collection of tribes. The tribal confederacy was more based on religious and cultural similarities than a political or military alliance. Nowadays we often refer to this arrangement as the Ionian League.

51. P.L.O.’s Arafat : YASIR
Yasser (also Yasir) Arafat was born in Cairo in 1929, the son of two Palestinians and the second-youngest of seven children. Arafat was beaten by his father as a child, and so he did not have a good relationship with him. Arafat did not attend his father’s funeral, nor did he visit his grave. The beatings were apparently administered because the young Arafat was repeatedly attending religious services in the Jewish quarter of Cairo. This infuriated his father, while Arafat’s explanation was that he wanted to “study the mentality” of the Jewish people.

57. Actress de Matteo of “The Sopranos” : DREA
Drea de Matteo is an actress who is most familiar to me for playing Adriana la Cerva on HBO’s wonderful series “The Sopranos”. She also played Joey’s sister on the short-lived “Friends” spin-off called “Joey”, and the character Angie Bolen on “Desperate Housewives”.

58. Communication syst. for the hearing-impaired : ASL
It’s really quite unfortunate that American Sign Language (ASL) and British Sign Language (BSL) are very different, and someone who has learned to sign in one cannot understand someone signing in the other.

61. Fifth of seven: Abbr. : THU
Thursday is the fifth of the seven days in the week.