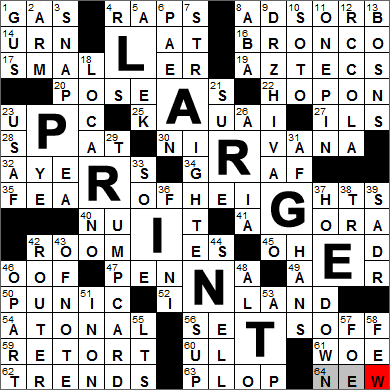 CROSSWORD SETTER: Corey Rubin
THEME: Large Print … the words LARGE PRINT are shown diagonally in the grid, with each letter occupying a large square. As such, each large letter is part of two across answers and two down answers.
COMPLETION TIME: 22m 34s
ANSWERS I MISSED: 0

14. Hookah component : URN
A hookah is a waterpipe, a device for smoking tobacco in which the smoke is passed through a water basin before it is inhaled.

15. Back muscle, in brief : LAT
The muscles known as the “lats” are the latissimi dorsi, the broadest muscles in the back. “Latissimus” is the Latin for “broadest” and “dorsum” is Latin for “back”.

16. What may go for a buck? : BRONCO
A “bronco” (also “bronc”) is a horse that is untamed. In Mexican Spanish “bronco” is a word for “horse”, and in the original Spanish “bronco” means “rough, rude”.

19. Pyramid-building people : AZTECS
The Aztec people of Central America dominated the region in the 14th-16th centuries. Two traits of the Aztec people are oft cited today. They built some magnificent pyramids, and they also engaged in human sacrifice. The two traits were linked in a way. For the consecration of the Great Pyramid of Tenochtitlan, 84,400 prisoners were sacrificed over a period of four days.

23. Bars from the supermarket, for short? : UPC
UPC stands for Universal Price Code or Universal Product Code. The first UPC-marked item to get scanned in a store was on June 26, 1974 at 08:01 a.m. at Marsh’s supermarket in Troy, Ohio. It was a 10-pack of Wrigley’s Juicy Fruit chewing gum …

25. Garden Isle of the Pacific : KAUAI
Because the island of Kauai is one of the wettest places on earth, all the rainfall has helped to carve out magnificent canyons that now have superb waterfalls. Kauai is used as a common backdrop for movies.

27. French pronoun : ILS
“Ils” is the French for “they”, when not referring to feminine nouns.

30. Lama’s goal : NIRVANA
Nirvana is a philosophical concept in some Indian-based religions. In the Buddhist tradition, nirvana is the state of being free from suffering i.e. not experiencing craving, anger or other afflicting states.

32. Australia’s ___ Rock : AYERS
Ayers Rock was discovered by Europeans in 1873, who gave it its name in honor of Sir Henry Ayers who was the Chief Secretary of South Australia at the time. The Aborigines call the landmark Uluru, the more accepted name these days.

34. Seven-time Wimbledon champ : GRAF
Steffi Graf is a former World No. 1 professional tennis player from Germany. Graf won 22 Grand Slam singles titles, more than any other man or woman other than Margaret Court. She is married to another former World No. 1, Andre Agassi.

41. Lead-in to phobia : AGORA-
In early Greece the “agora” was a place of assembly. Often the assemblies held there were quite formal, perhaps for the reading of a proclamation. Later in Greek history, things became less formal as the agora evolved into a market place. Our contemporary word “agoraphobia” comes from these “agorae”, in the sense that an agoraphobe has a fear of open spaces, a fear of “public meeting places”.

50. ___ Wars (conflicts of the second and third centuries B.C.) : PUNIC
The Punic Wars were a series of three conflicts fought between Ancient Rome and Ancient Carthage. With Carthage on the North African coast and Rome on the east coast of Italy, the Punic wars were largely an attempt to control the western Mediterranean Sea and were centered on the island of Sicily.

54. Like the opera “Wozzeck” : ATONAL
“Wozzeck” is the first opera composed by Alban Berg, and it is atonal. I can’t stand atonal music. It is just beyond me …

59. “Your mother wears army boots,” e.g. : RETORT
Although I haven’t heard it before, the retort or insult “your mother wears combat boots” is apparently common among children.

Down
1. Director Van Sant : GUS
Gus Van Sant is a movie director (among other things) who has been nominated twice for an Oscar, for “Good Will Hunting” in 1997 and for “Milk” in 2008.

2. Place for a tattoo : ARM
The word “tattoo” was first used in English in the writings of the famous English explorer Captain Cook. In his descriptions of the indelible marks adorning the skin of Polynesian natives, Cook anglicized the Tahitian word “tatau” into our “tattoo”.

3. Common stir-fry ingredient : SNAP PEA
Sugar peas are also known as snap peas. These peas are eaten before the seeds mature, and the whole pod is consumed.

6. Hymn : PAEAN
A paean is a poem or song that expresses triumph or thanksgiving. “Paean” comes from the ancient Greek “paian” meaning “song of triumph”.

8. Old sports org. with the Virginia Squires : ABA
The Virginia Squires were a team in the American Basketball Association (ABA), a team that fell through the cracks during the ABA-NBA merger and was shut down. The Squires had been founded as the Oakland Oaks in 1967, and were partly owned by singer Pat Boone.

9. Film character who says “I hate everything you say, but not enough to kill you for it” : DR ZHIVAGO
“Doctor Zhivago” is of course the epic novel by Boris Pasternak, first published in 1957. I haven’t tried to read it but the 1965 film version is a must-see, directed by David Lean and starring Omar Sharif in the title role. The story centers on Yuri Zhivago, a doctor and poet, and how he is affected by the Russian Revolution and the Russian Civil War.

11. It’s often the first to be knocked over : ONE-PIN
Bowling has been around for an awfully long time. The oldest known reference to the game is in Egypt, where pins and balls were found in an ancient tomb that is over 5,000 years old. The first form of the game to come to America was nine-pin bowling, which had been very popular in Europe for centuries. In 1841 in Connecticut, nine-pin bowling was banned due to its association with gambling. Supposedly, an additional pin was added to get around the ban, and ten-pin bowling was born.

12. “Great taste since 1905” drink : RC COLA
“Nehi Corporation” was the nickname for the Chero-Cola/Union Bottle Works that introduced the Nehi drink in 1924. Years later the company developed a new brand, Royal Crown Cola (also known as RC Cola). By 1955, RC Cola was the company’s flagship product, so the “Nehi Corporation” became the “Royal Crown Company”. In 1954, RC Cola became the first company to sell soft drinks in cans.

13. Petty officers, for short : BOS’NS
A boatswain works on the deck of a boat. A boatswain is unlicensed, and so is not involved in the navigation or handling of the vessel. He or she has charge of the other unlicensed workers on the deck. “Boatswain” is pronounced “bosun” and this phonetic spelling is often used interchangeably with “boatswain”. The contraction “bos’n” is also very popular.

18. Swiss resort city : LOCARNO
Locarno is a town in the southern, Italian-speaking part of Switzerland. Locarno is a resort town at the foot of the Alps, on the shore of Lake Maggiore.

23. Letters on a B-52 : USAF
The B-52 Stratofortress has been a mainstay of the USAF since its introduction in 1955. The stated intention is to keep the B-52 in service until 2045, which would give a remarkable length of service of over 90 years.

24. Poet laureate Henry James ___ : PYE
Henry James Pye was an English poet who held the post of Poet Laureate from 1790 until his death in 1813. As Poet Laureate, Pye was the first with the title to receive an annual cash stipend, albeit a modest one. Prior to Pye, England’s Poet Laureates were given a annual stipend of a barrel of wine.

31. Soft blankets : AFGHANS
An afghan is a blanket or a wrap that is knitted or crocheted from very colorful yarns.

38. I ___ Tenori : TRE
“I Tre Tenori” is Italian for “The Three Tenors”. The Three Tenors were Placido Domingo, Jose Carreras and Luciano Pavarotti (RIP).

39. Iraq’s ___ City : SADR
Sadr City is a suburb of Iraq, oft in the news these days. Sadr City is named after the deceased Shia leader Mohammad Mohammad Sadeq al-Sadr.

42. Wireless network necessity : ROUTER
In the world of computing, a router is a device that helps direct traffic, as it were. A router in a house is often found in combination with a modem, and directs traffic between the Internet and the computers in the home.

44. Fishhook attachment : SNELL
A snell is a length of thin line that connects a fishhook to heavier line.

48. Part in some arrangements : ALTO
In choral music, an alto is the second-highest voice in a four-part chorus made up of soprano, contr(alto), tenor and bass. The word “alto” describes the vocal range, that of the deepest female singing-voice, whereas the term “contralto” describes more than just the alto range, but also its quality and timbre. An adult male’s voice (not a boy’s) with the same range as an alto is called a “countertenor”.

Rafael Nadal is a Spanish tennis player who is noted for his expertise on clay courts, earning him the nickname “The King of Clay”.

55. Sulu and Uhura on “Star Trek”: Abbr. : LTS
Mr. Hikaru Sulu was of course played by George Takei in the original “Star Trek” series. Takei has played lots of roles over the years and is still very active in television. Did you know that he appeared in the 1963 film about President Kennedy’s WWII career called “PT-109”? Not only did Takei play the helmsman on the Starship Enterprise, he played the helmsman steering the Japanese destroyer that ran down John F. Kennedy’s motor torpedo boat.

Lt. Nyota Uhura was the communications officer in the original “Star Trek” television series, played by Nichelle Nichols. The role was significant in that Uhura was one of the first African American characters to figure front and center in US television. In a 1968 episode, Kirk (played by William Shatner) and Uhura kiss, the first inter-racial kiss to be broadcast in the US. Apparently the scene was meant to be shot twice, with and without the kiss, so that network executives could later decide which version to air. William Shatner says that he deliberately ran long on the first shoot (with the kiss) and fluffed the hurried second shoot (without the kiss), so that the network would have no choice.