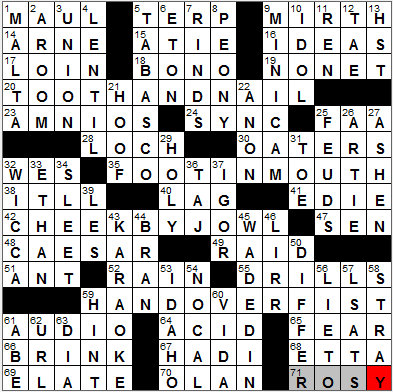 CROSSWORD SETTER: Sarah Keller
THEME: Body Part and Body Part … each of the theme answers is a common expression that starts and ends with a body part:

20A. Fiercely : TOOTH AND NAIL
35A. Embarrassingly imprudent : FOOT IN MOUTH
42A. Next to one another : CHEEK BY JOWL
59A. Fast and in large amounts : HAND OVER FIST


Today’s Wiki-est, Amazonian Googlies
5. U. of Maryland athlete : TERP
The sports teams of the University of Maryland are called the Maryland Terrapins, or “the Terps” for short. The name dates back to 1932 when it was first coined by the the university’s president at the time, Curly Byrd. He took the name from the diamondback terrapins that are native to the Chesapeake Bay.

14. “Rule, Britannia” composer : ARNE
“Rule Britannia!” was a poem by James Thomson, for which Thomas Arne composed the famous music.

18. Pro ___ (how some law work is done) : BONO
The Latin term “pro bon publico” means “for the public good”, and is usually shorted to “pro bono”. The term applies to professional work that is done for free or at a reduced fee as a service to the public.

23. OB/GYNs perform them : AMNIOS
Amniocentesis is the prenatal test which involves the removal of a small amount of the amniotic fluid surrounding the fetus using a hypodermic needle. The fluid naturally contains some fetal cells, the DNA of which can then be tested to determine the sex of the child and to check for the presence of genetic abnormalities.

25. Air safety org. : FAA
The Federal Aviation Administration was set up in 1958 (as the Federal Aviation Agency). The agency was established at that particular time largely in response to an increasing number of midair collisions. The worst of these disasters had taken place two years earlier over the Grand Canyon, a crash between two commercial passenger airplanes that resulted in 128 fatalities.

28. ___ Ness monster : LOCH
The Loch Ness monster has been talked about for centuries, but modern interest started in 1933 when a spate of sightings was reported. Those sightings don’t seem to have stopped, with photographs really sparking the imagination.

The “Surgeon’s Photograph” is an image that was taken in 1934, supposedly of the Loch Ness monster. It is perhaps the most famous picture of Nessie to this day, the one with a “head” and “neck” sticking up out of the water. The picture’s renown doesn’t seem to have abated, even though it was shown to be a hoax in the mid-nineties. The picture is called the “Surgeon’s Photograph” because it was “taken” by a Dr. Wilson.

32. “Scream” director Craven : WES
Wes Craven is a very successful film director and writer specializing in movies of the horror genre, which means I don’t watch them! He is responsible for “A Nightmare on Elm Street” and the “Scream” films.

48. Roman leader who met his fate on the Ides of March : CAESAR
In Act I of William Shakespeare’s “Julius Caesar” a soothsayer warns the doomed emperor to “beware the Ides of March”. Caesar ignores the prophesy and is of course killed on the steps of the Capitol by a group of conspirators on that very day.

68. Blues singer James : ETTA
Etta James was best known for her beautiful rendition of the song “At Last”. Sadly, as she disclosed in her autobiography, James lived a life that was ravaged by drug addiction, leading to numerous legal and health problems. Ms. James passed away in January 2012 having suffered from leukemia.

70. Wife in “The Good Earth” : O-LAN
Pearl S. Buck’s novel “The Good Earth” won a Pulitzer in 1932, and helped Buck win the Nobel Prize for literature a few years later. The story tells of life in a Chinese village and follows the fortunes of Wang Lung and his wife O-Lan. Although “The Good Earth” has been around for decades, it hit the bestseller list again in 2004 when it was a pick for Oprah’s Book Club.

Down
1. Mediterranean island country : MALTA
The island of Malta is relatively small,  but its large number of inhabitants makes it one of the most densely populated countries in Europe. Malta’s strategic location has made it a prized possession for the conquering empires of the world. Most recently it was part of the British Empire and was an important fleet headquarters. Malta played a crucial role for the Allies during WWII as it was located very close to the Axis shipping lanes in the Mediterranean. The Siege of Malta lasted from 1940 to 1942, a prolonged attack by the Italians and Germans on the RAF and Royal Navy, and the people of Malta. When the siege was lifted, King George VI awarded the George Cross to the people of Malta collectively in recognition of their heroism and devotion to the Allied cause. The George Cross can still be seen on the Maltese flag, even though Britain granted Malta independence in 1964.

5. ___ sauce : TABASCO
Edward McIlhenny created the first Tabasco Sauce in 1868. He recycled old cologne bottles to give it to friends, and when he went into business he ordered new cologne bottles for the commercial product. To this day, the Tabasco Sauce bottle bears a striking resemblance to the bottle used to distribute 4711 cologne.

6. School on the Thames : ETON
The world-famous Eton College is just a brisk walk from Windsor Castle, which itself is just outside London. Eton is noted for producing many British leaders, including David Cameron who took power in the last UK general election. The list of Old Etonians also includes Princes William and Harry, the Duke of Wellington, George Orwell, and the creator of James Bond, Ian Fleming (as well as 007 himself as described in the Fleming novels).

10. Winner of a Fox talent show beginning in 2002 : IDOL
“American Idol” is a spin-off show that was created after the amazing success of the British television show “Pop Idol”. I can’t stand the program myself …

13. President after F.D.R. : HST
Harry Truman wanted to go to West Point having served with the Missouri Army National Guard on active duty in WWI, but he couldn’t get in because of his poor eyesight. He didn’t have the money to get into college anywhere else. He did, however, study for two years towards a law degree at the Kansas City Law School in the twenties, but he never finished his schooling. So, Harry S. Truman was the only US President who did not have a college degree.

22. Before long, poetically : ANON
“Anon” originally meant “at once” and evolved into today’s meaning of “soon”, apparently just because the word was misused over time.

26. Clarinetist Shaw : ARTIE
Artie Shaw was a composer, bandleader and a jazz clarinetist. Shaw’s real name was Arthur Jacob Arshawsky, born in New York City in 1910. Of his many claims to fame is the fact that he (a white bandleader) hired Billie Holiday (a black vocalist) and toured the segregated South in the late thirties. Holiday chose to leave the band though, due to hostility from Southern audiences back then.

31. Follower of tic-tac : TOE
When I was growing up in Ireland, we played “noughts and crosses” … our name for tic-tac-toe.

32. Pagan nature religion : WICCA
Wicca is a relatively new phenomenon, a Neopagan religion that developed in the twentieth century. A follower of Wicca is called a Wiccan or a Witch.

33. Revolutionary Allen : ETHAN
Ethan Allen was one of the founders of the state of Vermont. He was also a hero in the American Revolutionary War, famous for leading (along with Benedict Arnold) the small band of men that captured Fort Ticonderoga. And yes, the Ethan Allan store and furniture line is named for Ethan Allen the patriot.

36. Atlantic City casino, with “the” : TAJ
Donald Trump’s Taj Mahal Casino Resort opened up for business in Atlantic City in 1990.

37. Stravinsky or Sikorsky : IGOR
Igor Stravinsky’s most famous works were completed relatively early in his career, when he was quite young. His three ballets “The Firebird”, “Petrushka” and “The Rite of Spring” were published in 1910-1913, when Stravinsky was in his early thirties.

Igor Sikorsky was a Russian pioneer in the world of aviation. He designed and indeed piloted the world’s first multi-engine, fixed-wing aircraft in 1913. He moved to the US in 1919 and set up his own aircraft manufacturing business. In the thirties he made the magnificent flying boats that were used by Pan Am in their Clipper era. Sikorsky also developed the world’s first mass-produced helicopter, in 1942.

39. Article in Paris Match : LES
“Paris Match” is a weekly magazine published in France, first appearing on newsstands in 1949.

53. Boise’s state : IDAHO
Boise, Idaho is the largest metropolitan area in the state by far. There are a number of stories pertaining to the etymology of the name “Boise”. One is that French trappers named the tree-lined river that ran through the area “la rivière boisée”, meaning “the wooded river”.

57. Exams for would-be attys. : LSATS
The Law School Admission Test (LSAT) has been around since 1948.

60. ___ Blue, 1971 Cy Young Award winner : VIDA
Vida Blue is a former Major League Baseball pitcher. He played for the Oakland Athletics, the San Francisco Giants and the Kansas City Royals. He is one of only four pitchers in history to have started one all-star game for the American League and one for the National League.

61. Lincoln, the Rail-Splitter : ABE
Before Abraham Lincoln was elected president, his political campaign used the nick-name “the Rail-Splitter” to emphasize his humble upbringing. Lincoln had worked at splitting fence rails in his youth.